Soon after I returned from my summer in Japan, I was sent a photograph showing the sabani that I helped build in Okinawa two years ago racing this summer.  It was great to see, as the boat was sent directly to a museum in Tokyo after my teacher and I finished building it (a process I chronicled on this blog back in 2009-2010) where it went on display.

The museum later agreed to donate the boat to a sabani racing team back in Okinawa.  Its great to see that its in the water and competing.  No word on how well it did.

It's my fervent hope to get back to Okinawa next July for the 15th Anniversary Sabani Races, an open water event in which boats race 35km from Zamami Island to Naha. 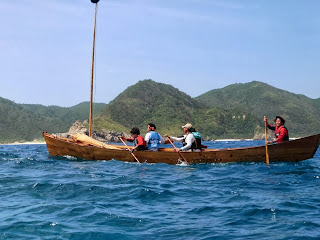