Readers of this blog may remember last February I received an award from the American Craft Council honoring my work in Japan documenting traditional boatbuilding.  The award, the Rare Craft Fellowship, was sponsored by the Balvenie, a Scottish distillery that prides itself as a producer of craft-made whiskeys.

Here's my previous posting about the award and the other finalists:
http://blog.douglasbrooksboatbuilding.com/2014/02/2014-rare-craft-fellowship-award.html

And Balvenie and the American Craft Council's websites:
https://uk.thebalvenie.com
http://craftcouncil.org

Balvenie generously invited me to the United Kingdom for two weeks, specifically to show me their operation and have me meet two award-winning craftsmen in England. 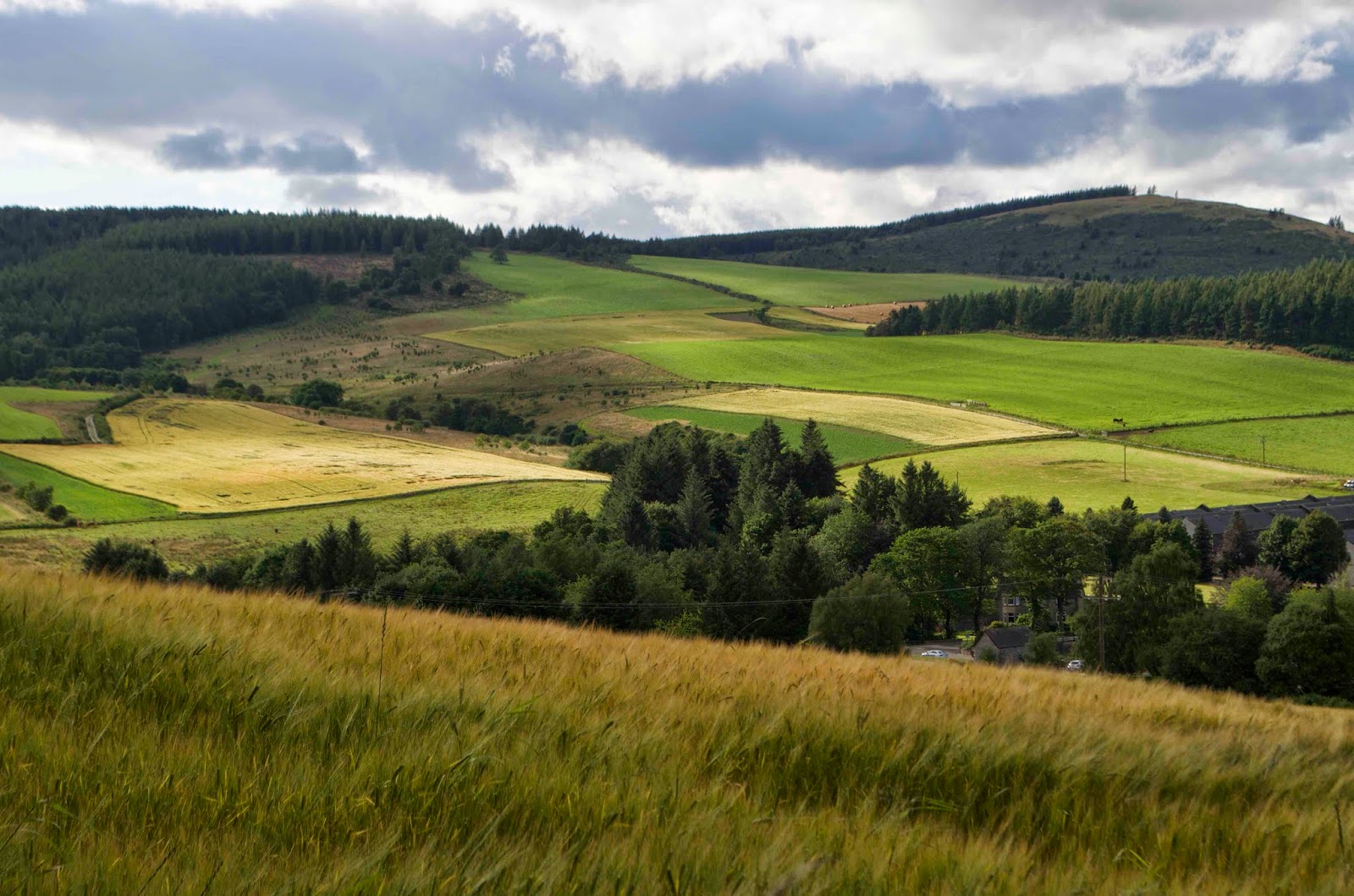 The week in the Highlands was wonderful for my wife and I, staying first in a cottage at the Glenfiddich Distillery.  The countryside is beautiful, stunning, mysterious, and steeped in history. 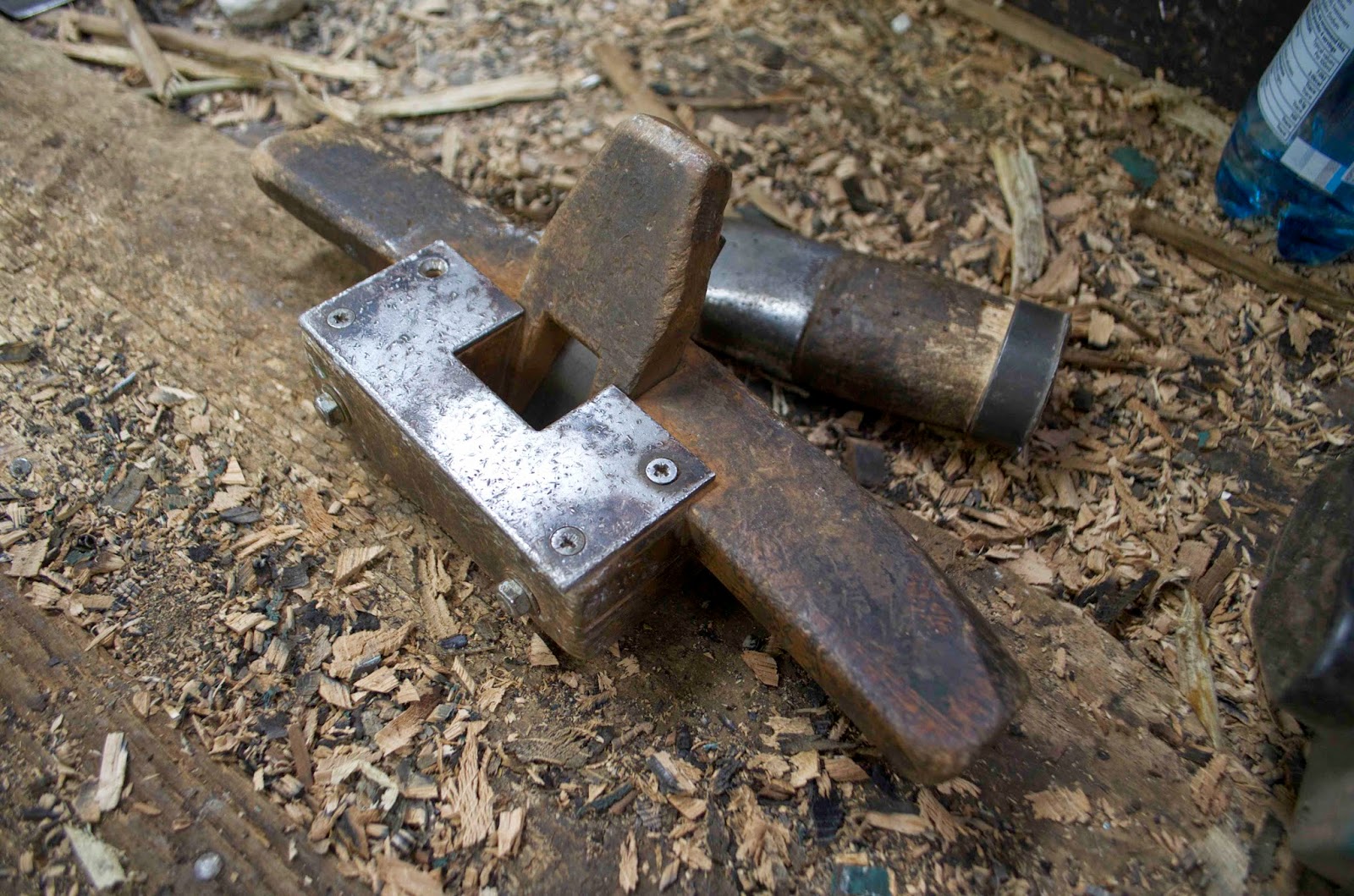 The Balvenie introduced me to every step in the whiskey-making process (save for sowing the barley).  Because of my own experience studying Japanese coopering I was most interested in the distillery's cooperage, where most of the work involves repairing bourbon barrels, readying them to hold whiskey for up to 21 years. 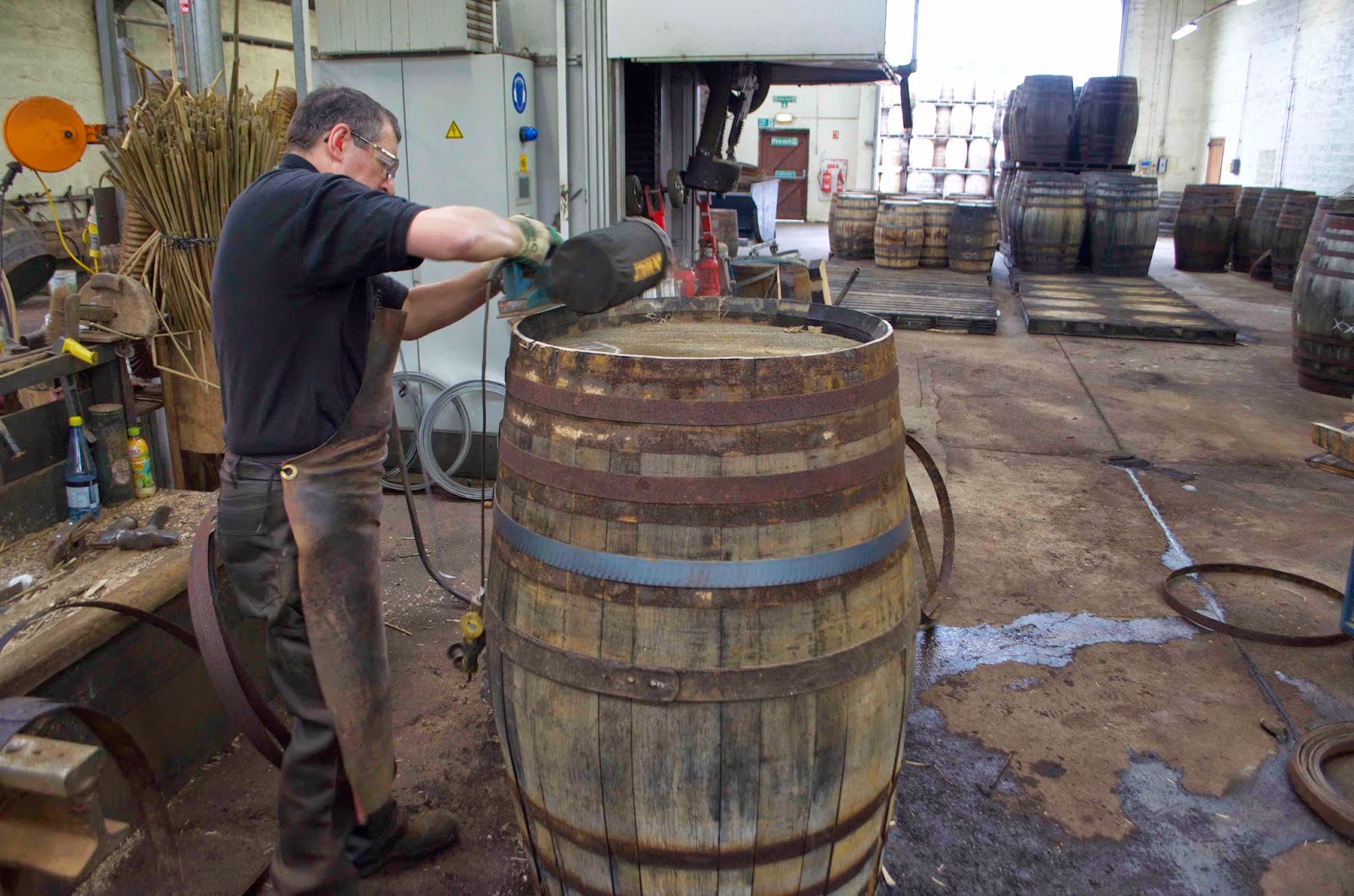 The process is both highly mechanized and traditional, with a giant pneumatic press used to push the hoops on the barrels, but also coopers using crozes - a truly ancient tool - to rabbet for the barrel ends.  The coopers were fascinating craftspeople to talk to and I shot so much video with my camera I am at a loss to find stills shots for this blog.  I am coming home determined to figure out how to post videos to a YouTube channel.... 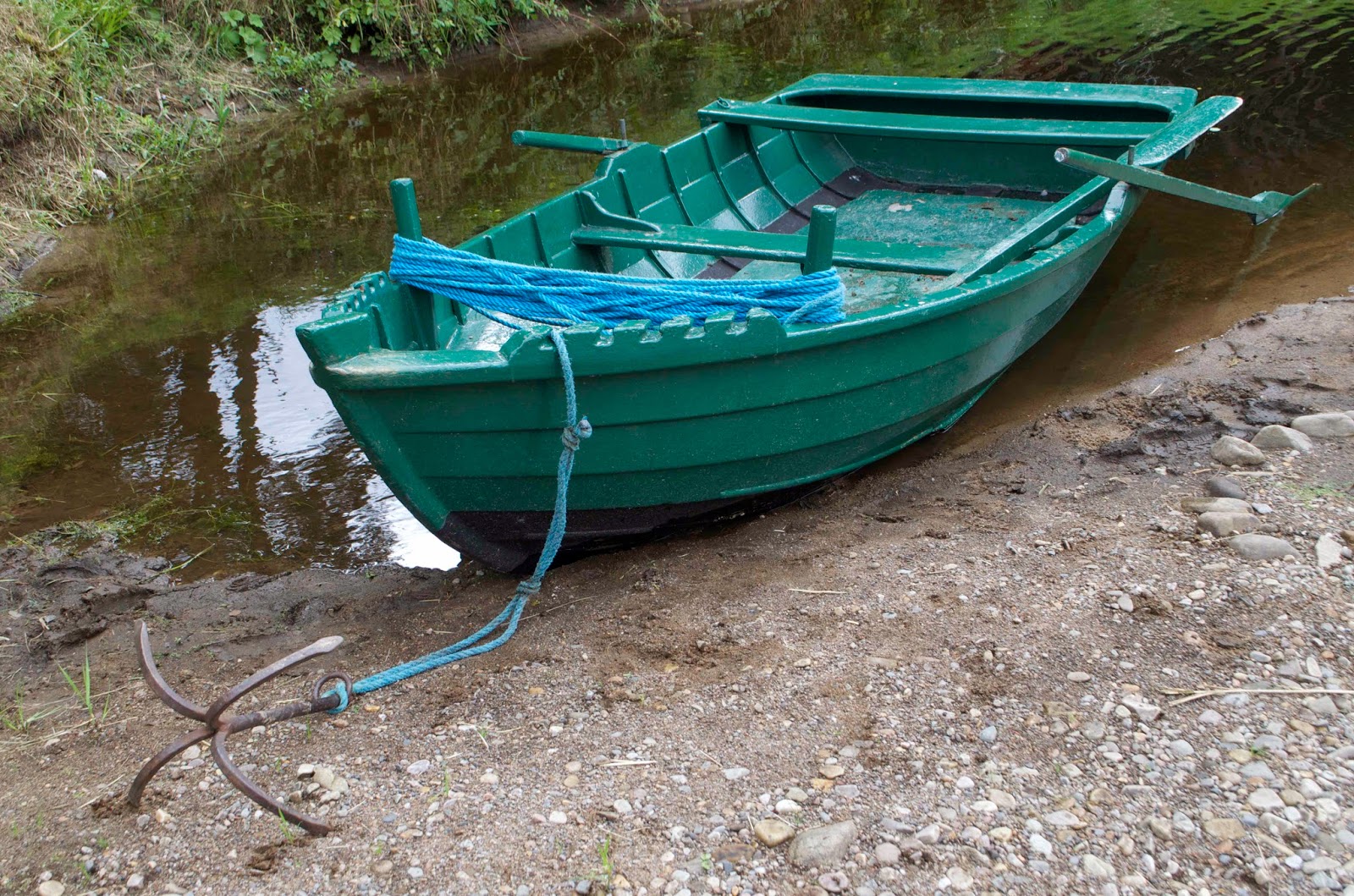 Balvenie arranged a canoe trip down the Spey for us.  Our guide Dave Craig runs Spirit of the Spey river trips and we can recommend him highly.  On our way down a 15-mile stretch we passed many ghillies (guides) and salmon fishermen (fishers).  I insisted we come ashore to inspect a traditional Spey coble.  The older ghillies still use them in quiet stretches of the Spey, setting an anchor and paying out the line to position the boat at the right spot in the river.
http://www.spiritofthespey.co.uk 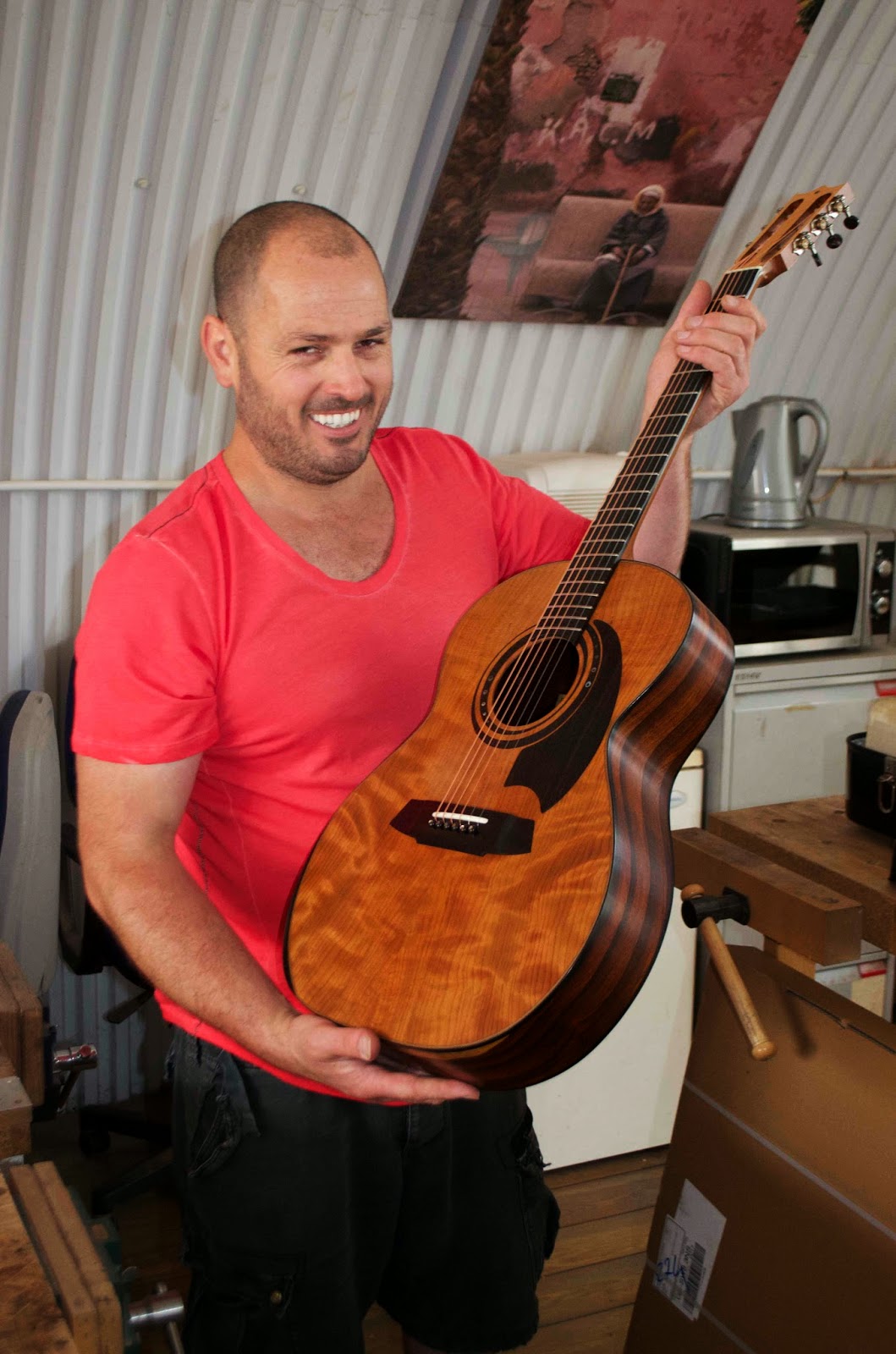 Balvenie then flew us to London where I spent two days in the studio of David Antony Reid, a luthier.  It was a fascinating session with an incomparable craftsman.  He builds custom guitars, largely from reclaimed wood, and has innovated many techniques to enhance sound quality.
http://www.darluthier.com 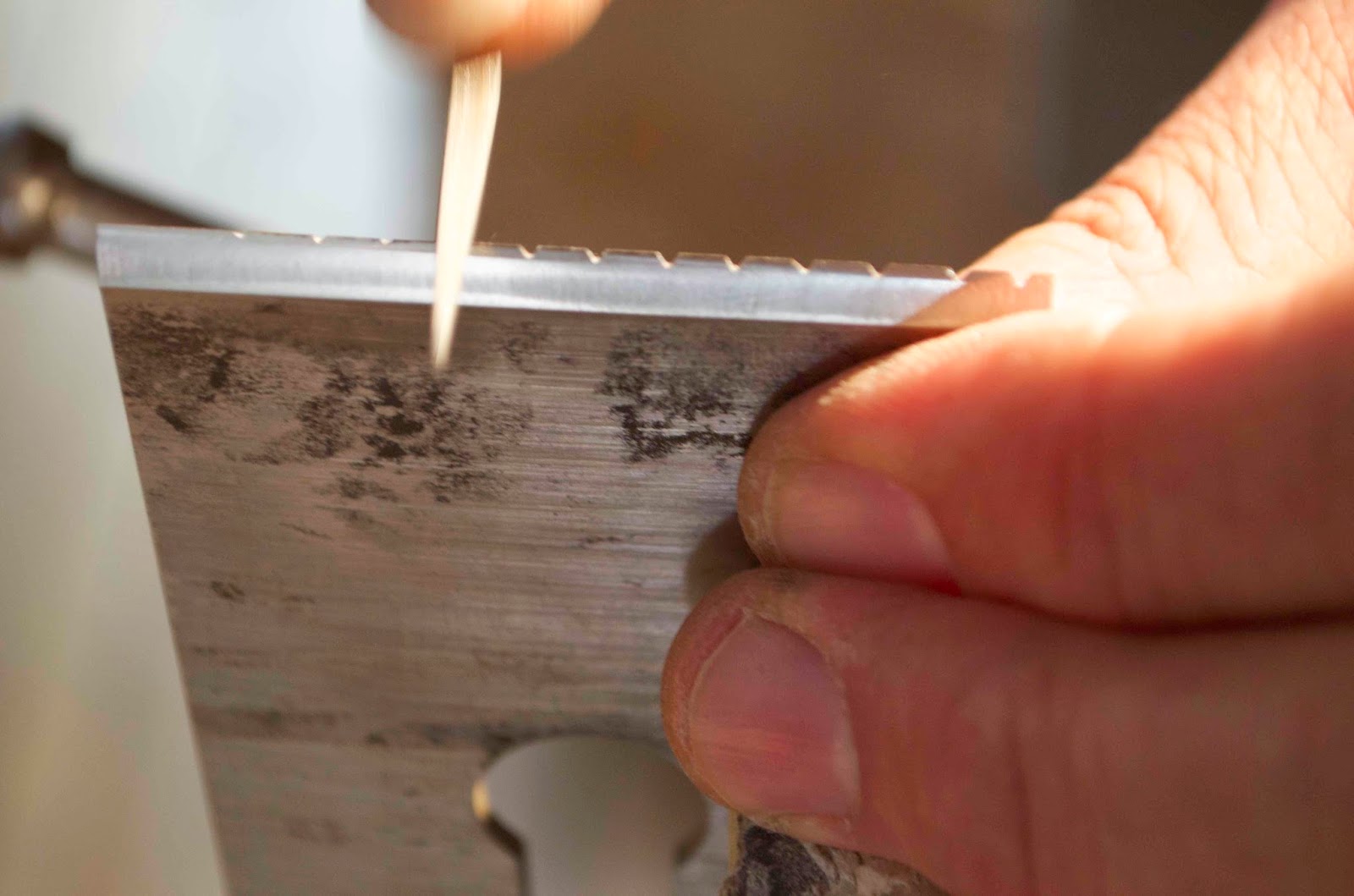 One thing I learned from David was the use of a toothed plane blade for working highly figured, difficult grain.  I noticed he had a commercial plane blade which was toothed, but David showed me how he also files notches in a blade with a diamond file to get the same affect. 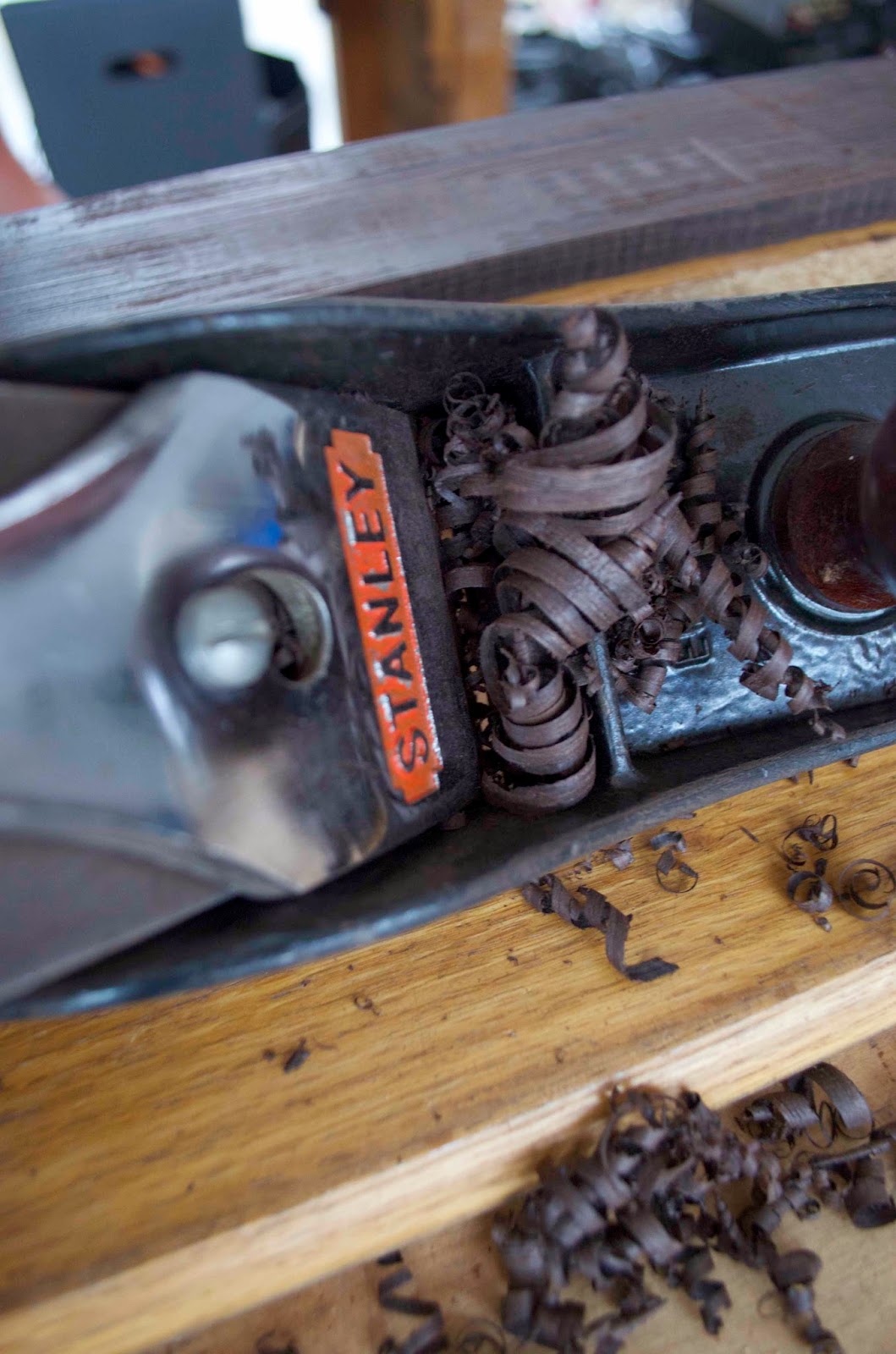 The results are amazing.  He planed African blackwood for me and the shavings came out as narrow ribbons.  Working with a series of narrow cutters keeps the grain from tearing out.  Later he finishes all his surfaces with scrapers. 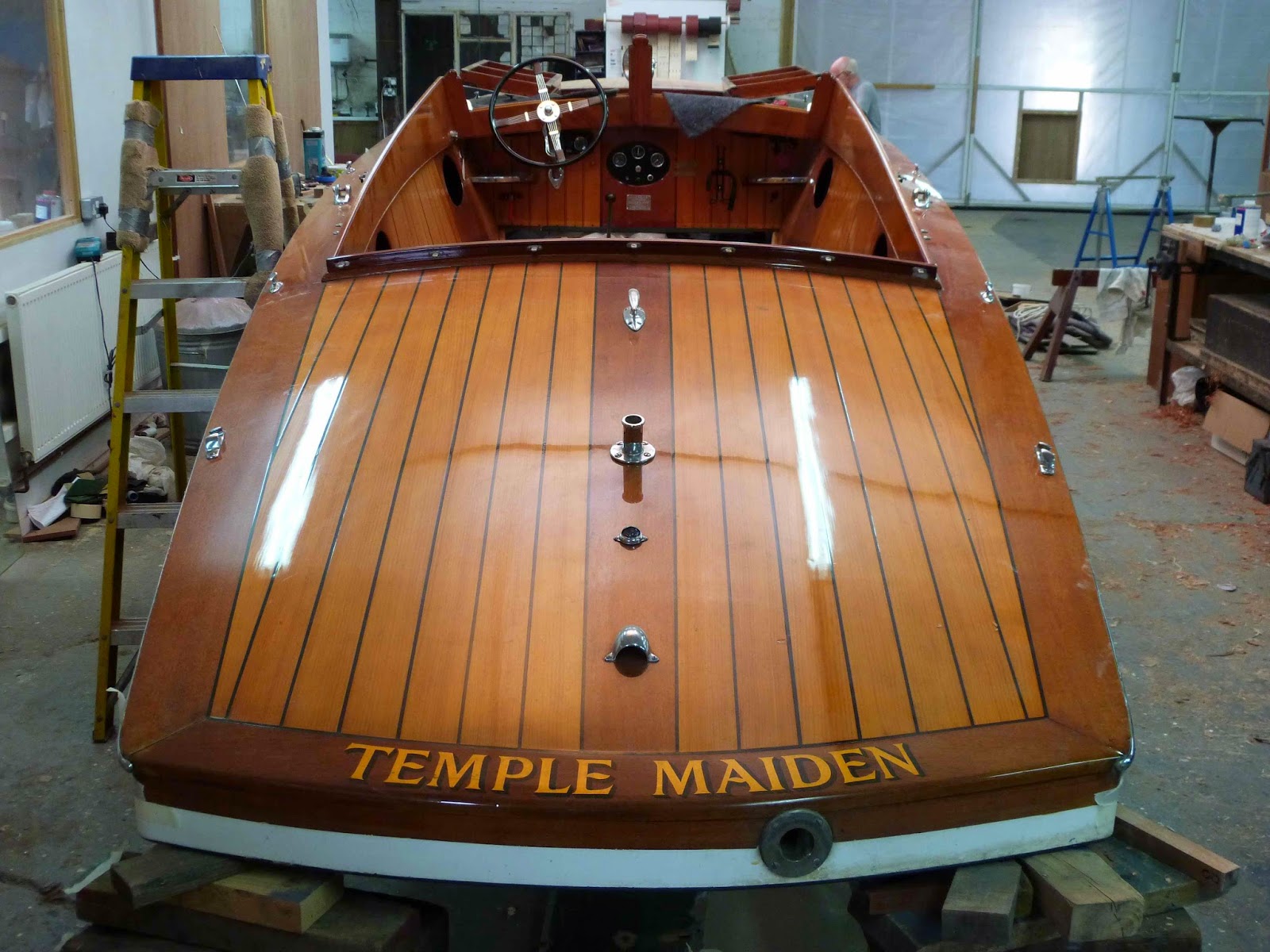 From London we traveled to Henley-in-Thames and the shop of Lucie and Colin Henwood of Henwood and Dean Boatbuilders.  They build and restore classic boats in a region with a long tradition of fine yachts.
http://www.henwoodanddean.co.uk 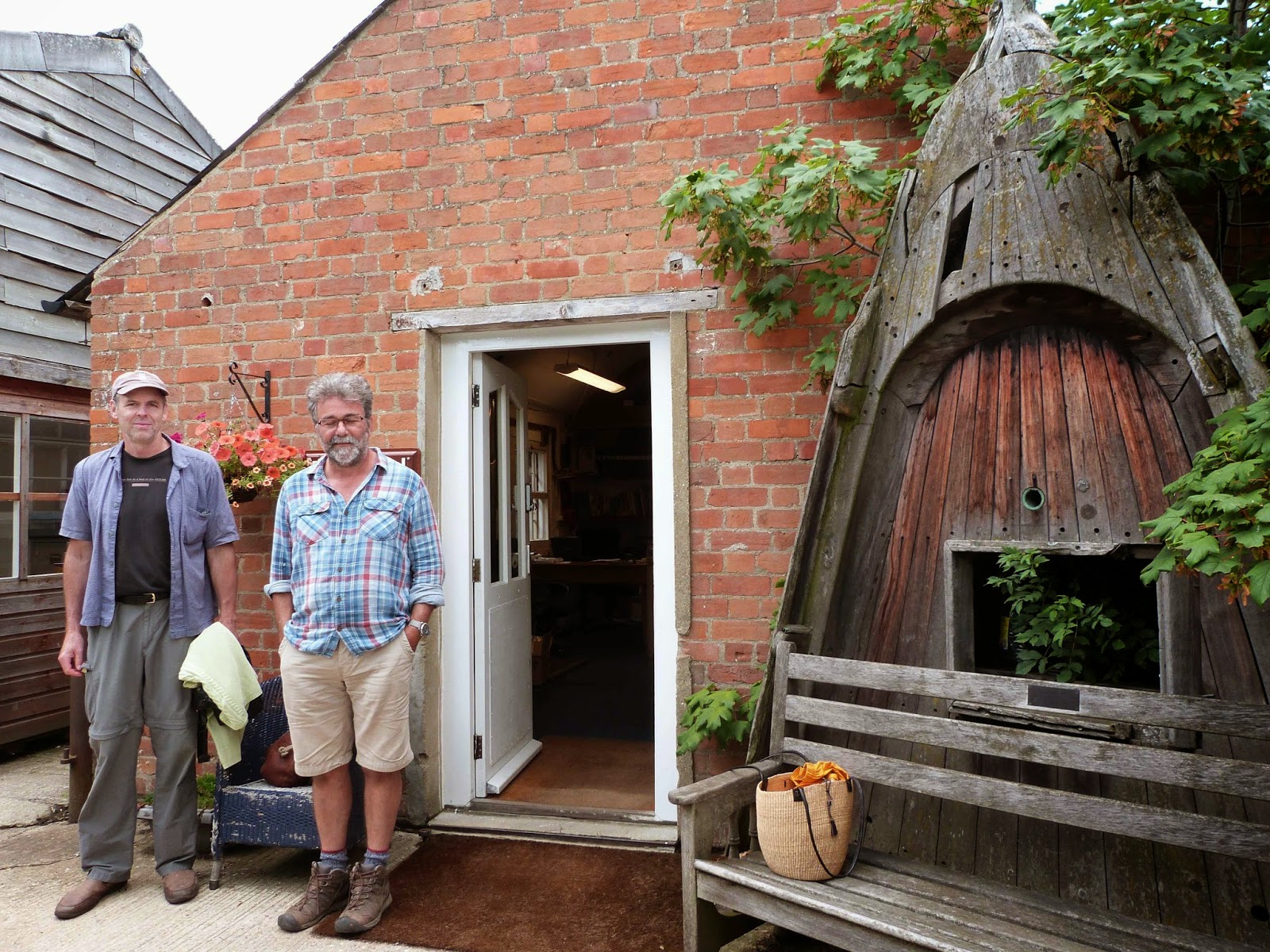 Colin and I outside the shop office.  The shop is located in some old farm barns, and Colin has several employees doing fantastic work. 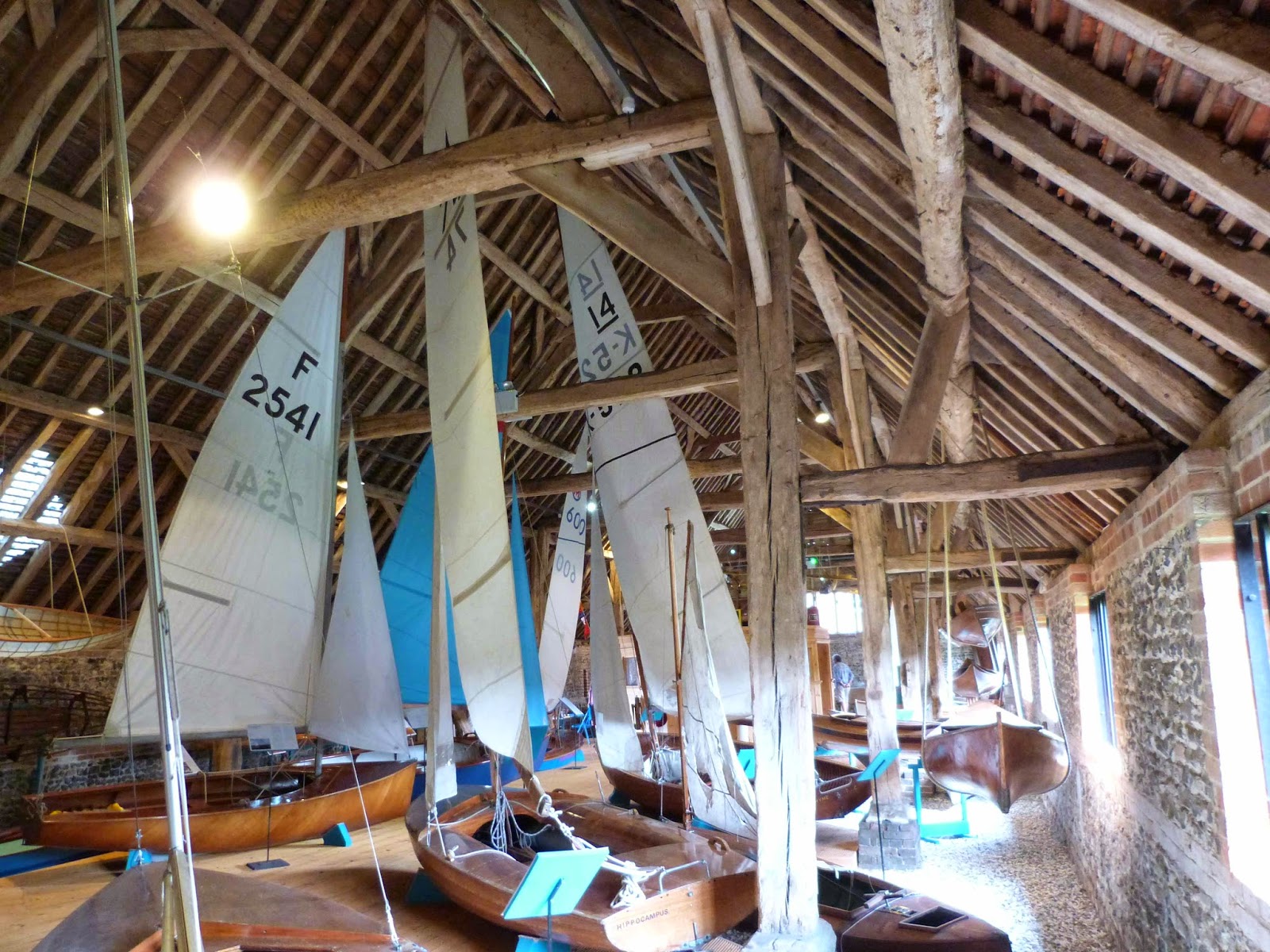 Lucie and Colin were amazing tour guides, enthusiastically showing us the sights.  This is a new maritime museum housed in a 17th Century barn not far from Henley. 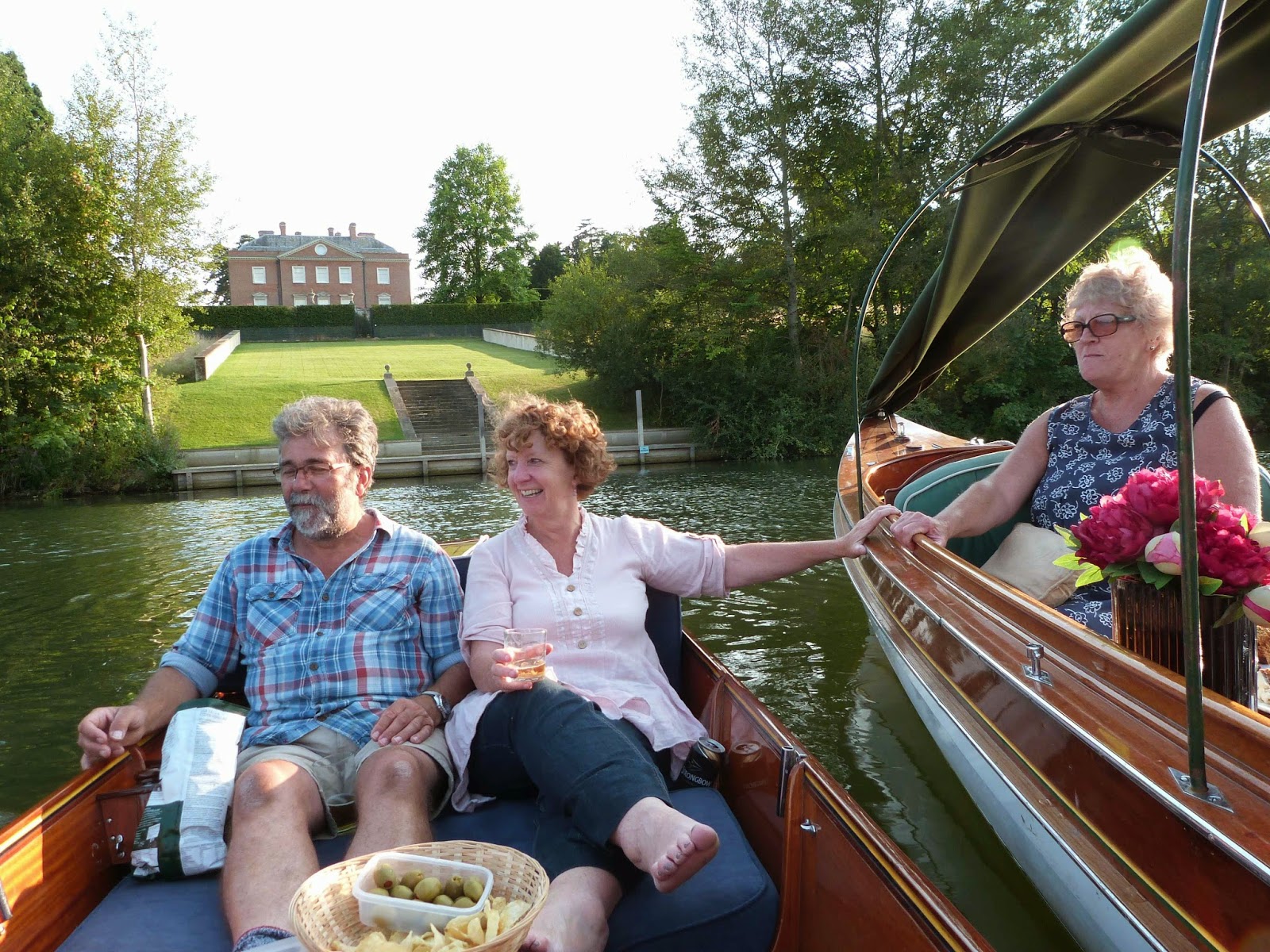 We had a picnic on the river aboard their electric powered punt. 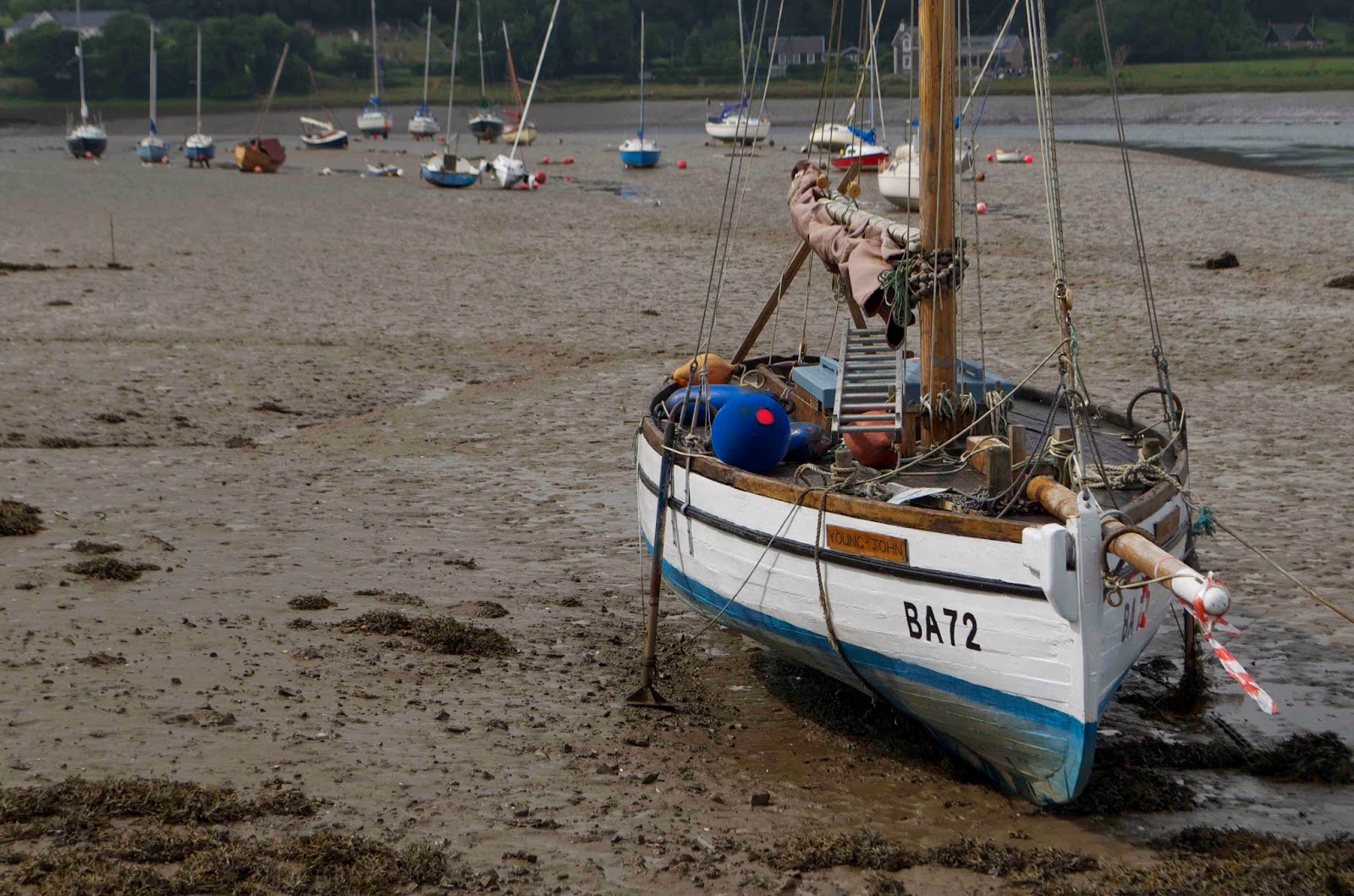 Our trip via the Balvenie ended in Henley, but we came back to Scotland's west coast to visit a friend who has a home in Kirkudbright.  A lot of history here, including an old Annan smack in the harbor. 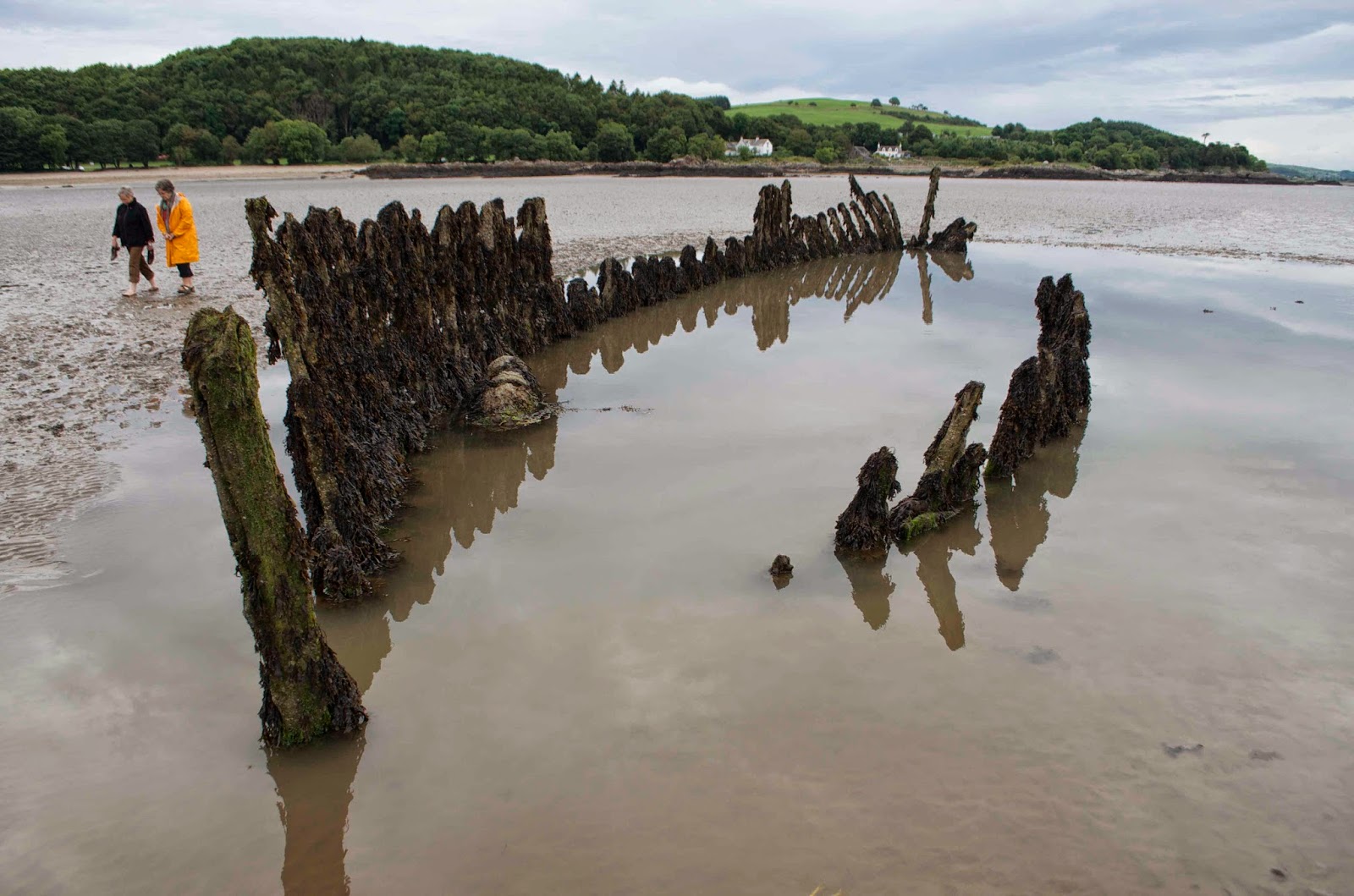 And the wreck of a wooden ship on the mudflats.  All in all an unbelievable trip that makes us both eager to get back over here, but also inspired by the scenery we have seen and the people we've met.