Almost to the end of Week Three and our time here consists of boatbuilding and little else. We are working twelve hour days, five days a week, with six to ten hours on Saturday. Okay, I'll stop referencing our heroic suffering, especially since today Nasu san told us during his busy times he worked from 5:30 am to 10 pm. He said he took the normal workman's holidays of just the first and fifteenth of each month. 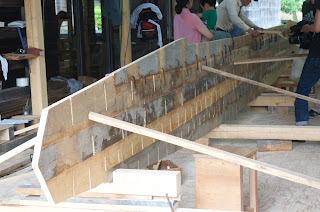 Last week we finished the bottom of the boat, which Nasu san said represented 1/3rd of the total labor. 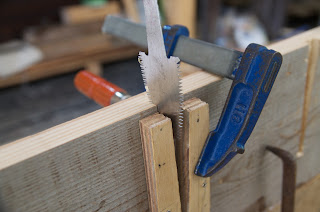 The bottom has about 200 edge nails, and one innovation we developed was a pattern for the mortises. Nasu san can cut a hundred mortises by eye and all of them will be nearly exactly the same. We cannot do that, but this jig lets us not only standardize all the mortises (which would greatly help when making plugs), but we also ran a saw and cut the sides of each mortise as well. 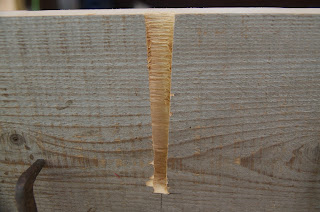 Using the saw gave us a nice clean edge. 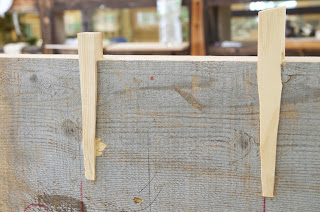 I would have next set up a jig to cut identical plugs but Nasu san just sat with scraps and his hatchet and made most of our plugs by eye. Again its astounding what he can do and how consistent his work is. If Malcom Gladwell says you have to do something 10,000 times to become proficient, well Nasu san has built about ten cormorant fishing boats (and hundreds of other boats) and each cormorant boat has a thousand nails. He's proficient. 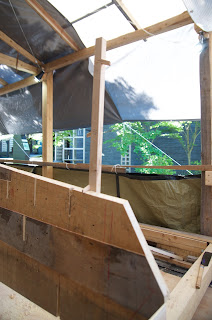 This stick pattern has the bevels we needed for the bottom. 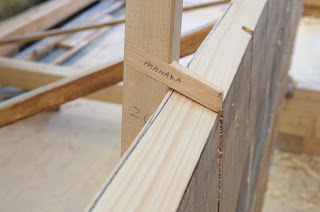 Nasu san have five stations along the 36-foot long bottom for bevels and plank angles. 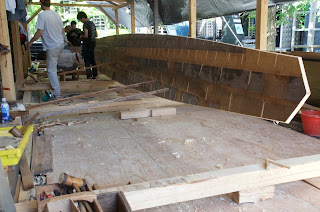 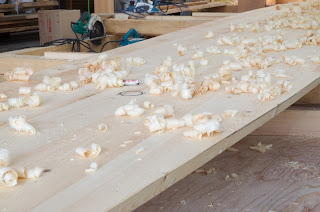 We planed both sides of the bottom, first roughing it with a power plane but then final finish with hand planes. 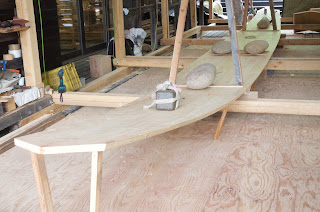 Nasu san uses two sets of stout props as well as stones and an iron weight to fix the bottom for bending and planking. 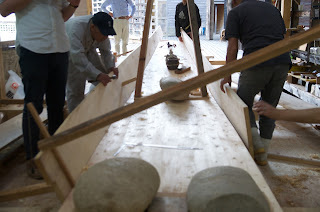 We got right to planking. 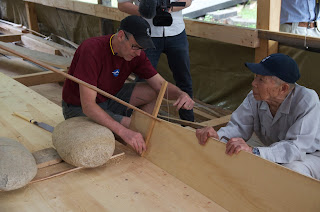 Here Nasu san is showing me how to use the sagefuri, a plumb bob on a stick. He has a mark five sun below the string and every angle of the boat is a horizontal measurement from the string to the mark. In other words, every angle is memorized as the short leg of a right triangle. 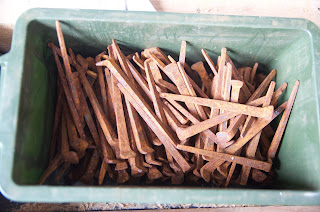 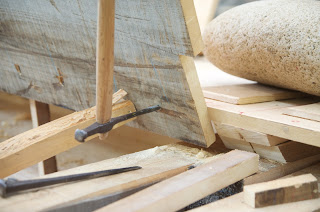 All the nails in the boat are piloted with a tool called a moji. It is a narrow chisel that one strikes, then you swing the handle 3-5 times through 180 degrees and strike again. Its a SLOW process and in my next blog post I will show a small innovation we've made. Surprisingly, Nasu san has not objected to any of our little tricks and patterns, and when I asked him today what sorts of innovations he made versus how his father built boats he said he'd changed nothing. He acknowledged that glue and power tools changed things, but that was it. 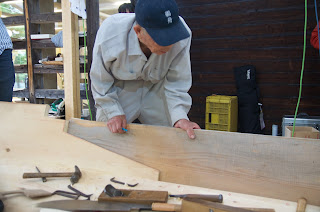 We use a kama scarf on the planking. This was the same scarf on the bottom planks. It takes three pieces to make a single strake the length of the boat. 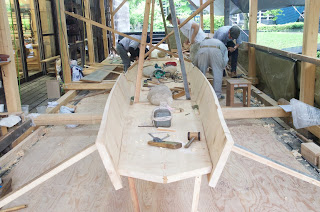 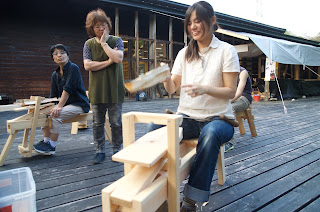 Meanwhile the Green Woodworking Club of the furniture school got out their shave horses and started practicing. 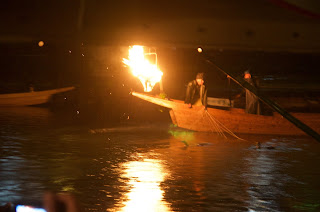 And Tobunken, the Tokyo Research Institute for Cultural Properties, one of our partners in this project, took us to see the cormorant fishing in Gifu. Very dramatic and ancient feeling.