I promised additional blog postings even though the boat was built, but jet lag and getting back into the swing of things after two and a half months away took a bit more time than I thought.  In the time since I last posted my wife joined me in Okinawa for a week of travel in the southernmost islands of the archipelago, and then five days in Kyoto with trips to Kobe University to meet some students building boats, and a trip to the National Museum of Ethnology.

After I left Iejima the shipment of the boat to Tokyo was finally arranged and a proper launching ceremony was held.  I should soon be getting photographs of the event which I will post here.

In this post I wanted to share some images of historic sabani I saw during my last travels in Okinawa.  They include two sabani on display at the Okinawan Prefectural Museum of History in Naha, the capitol city; two boats I found in the tiny, tiny village of Funauki on Iriomote Island, and the boat in the small museum on Taketomi Island.  As bad luck would have it, we had just part of one day on Ishigakijima, where the museum has several sabani, but it was a Monday and the museum was closed. 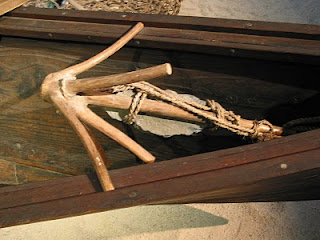 In an earlier posting I showed the stone anchor that Shimojo san's son made for our boat, but at the Prefectural Museum they had this style anchor, which Shimojo san told me actually was the type he made early in his career. 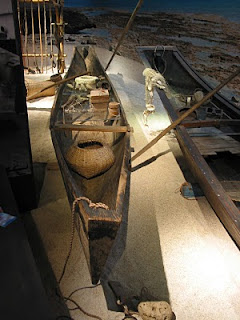 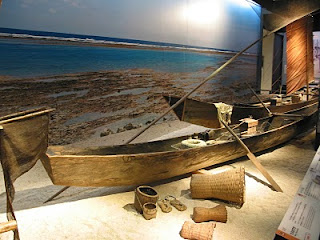 This is by far the most interesting boat I saw after leaving Iejima.  This sabani is a dugout, made entirely from a single log (that's a more typical sabani in the background).  But what you see in this boat is the development of the sabani shape.  I had assumed that the sabani as I built it was a refinement over the dugout, but in fact the dugout sabani were much closer to later sabani in terms of shape than to what we normally think of as a dugout. 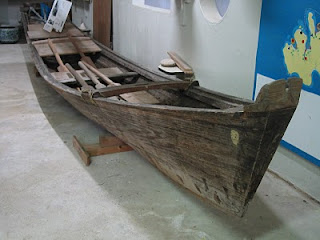 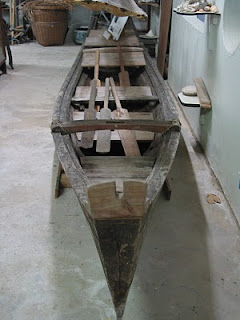 This small (very small) sabani I found in a tiny museum in a tiny village called Funauki, Iriomote Island, a place only accessible by boat. 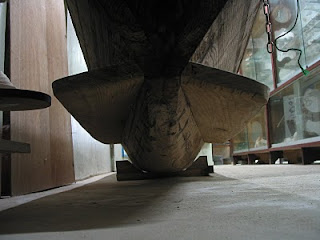 This boat has these stabilizers at the stern, and they were clearly a later addition to the hull.  I saw these on all the powered sabani that I found, but this was the only one I found on an unpowered sabani. 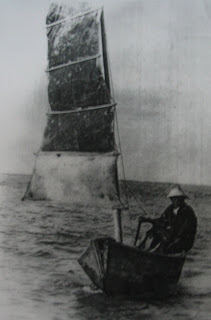 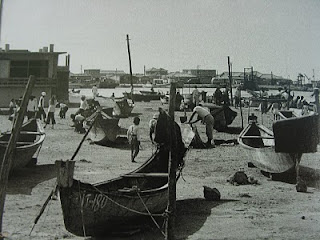 Looking at the bus in the background I would date this photo from the 1970's.  It was this decade that the wooden fishing sabani quickly disappeared. 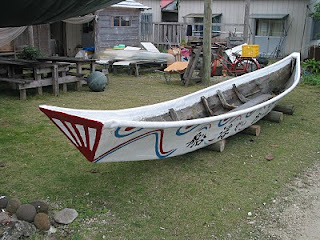 This sabani was sitting outside and from its decorations was used as a festival boat.  It had an engine bed so it was probably formerly a fishing boat.  Sadly, it has rotted completely through from exposure. 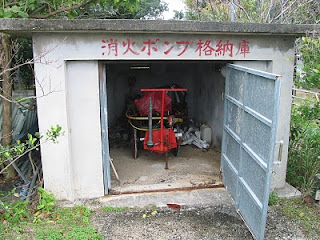 I said that Funauki was small and I meant it.  THIS is the fire department! 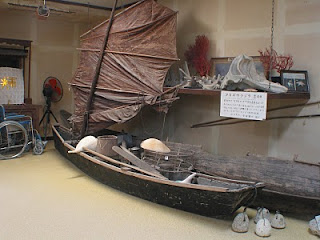 On Taketomi Island their museum had one small sabani, about twelve feet long, fully rigged.  Those anchors at the stern are just like what was made on Iejima.  The other hull behind the sabani is a Polynesian dugout that was found adrift by some fishermen from Taketomi, very symbolic of the maritime influences from the South Pacific.
Posted by Douglas Brooks at 12:03 PM