We fastened the transom in a rabbet across the back of the keel plank.  At the bow we connected the stem to the keel with the kama tsugite, which is locked with a wedge.  The kama is a curved sickle, and the joint looks like two interlocking kama.  The basic backbone of the boat is now finished, and we will have a ceremony called a kawarazue on Monday at 7pm to celebrate this stage of the construction.

Like many Japanese boats, the tenmasen's keel plank rises aft, and the bottom is bent at a single joint.  This joint can also be kama tsugite, which is how my Tokyo teacher made it, or it can be made by a process called kirimage, or "cut bending."  I cut a dovetail groove across the bottom 1/3 the depth of the plank and a kerf across the top the same depth.  We then poured boiling water and slowly lifted the transom with a car jack.  As the top cut closes we recut it to relieve the opening.  Eventually when we are done we will insert a dovetail wedge across the bottom to lock the joint.  My teacher in Aomori used this technique.

My Tokyo teacher was adamant that this method was a bad practice, and I could tell from the looks on the Bengali shipwright’s faces that they agreed.  I told their interpreter that it was okay if they wanted to disapprove and he said that, indeed, their first reaction was that this looked inherently weak.  They use a joint similar to the kama to scarf the rubrail and sheer planks on their boat.  This method is relatively quick, however, and the local maritime museum curator assured me it was the joinery Setouchi shipwrights used.

Soon I've got to get a blog post up about their boatbuilding.... 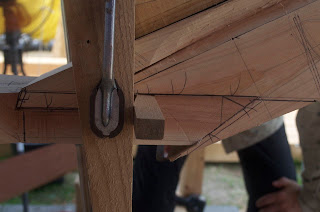 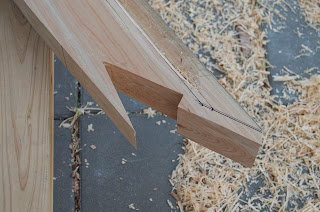 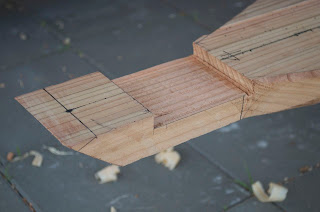 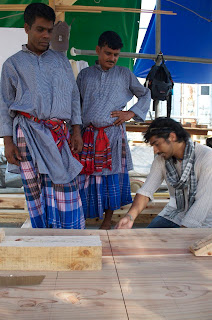 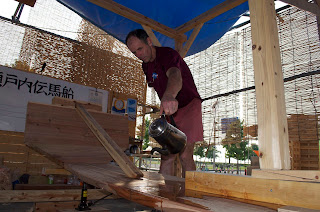 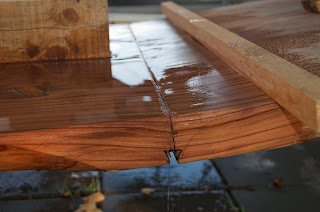 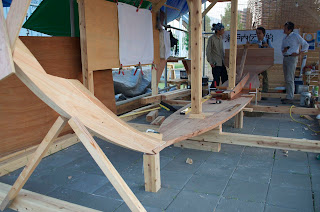 Posted by Douglas Brooks at 5:43 PM