Middlebury College in Middlebury, Vermont offers a one-month Winter Term each January.  Students must take three of these classes in their four years at the College.  This year I taught a class entitled "Building the Japanese Boat" in which I led fifteen undergraduates in the construction of two traditional river boats, one from the Hozugawa near Kyoto and the other from the Kesengawa in Tohoku, the center of the region struck by the 2011 tsunami.

The goal of the class was to both build the boats, introducing students to the tools and techniques of Japanese boatbuilding, but also talk about apprentice learning as it is practiced in Japan, with its roots in Zen Buddhist training.  My students said they were interested in working with their hands, trying something non-academic, and getting exposure to Japanese culture.

One boat was a five meter version of the six meter ayubune I built last spring in Kameoka, Japan (see 2014 blog posts).  While in Kameoka last spring I found an original boat and measured it; this class then built a faithful replica.  Our other boat was designed from lines I received from a class at Wakayama University in Japan that found them on a volunteer trip to Tohoku.

Students wrote papers on different facets of the project, and its my hope to bring this work together into the beginnings of a manuscript on how to build these boats.  One student also produced CAD drawings of the two boats. 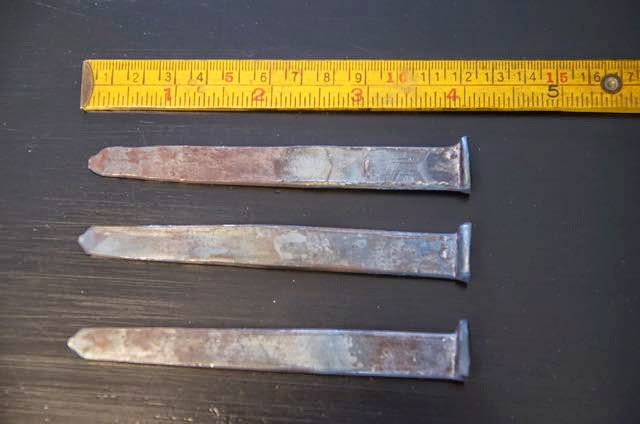 Our boat nails.  The scale is metric and shaku. 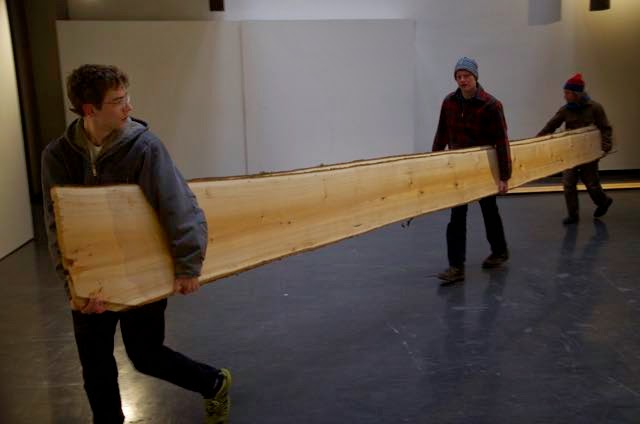 Our wood was a single, large cedar log cut and milled by Currier Forest Products in Danville, Vermont.  We used some white pine for additional lumber we needed. 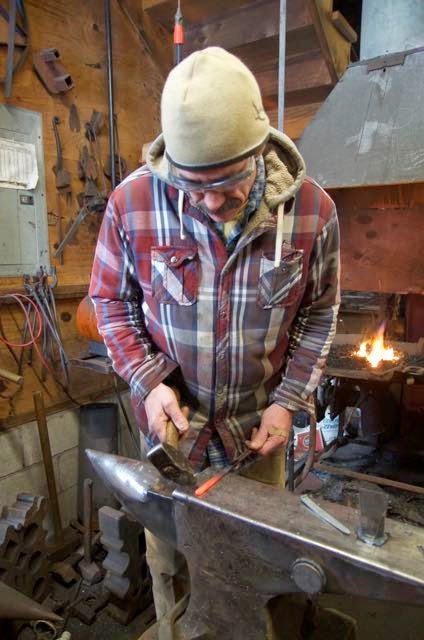 Our boat nails were made my Jim Fecteau, a blacksmith in Huntington, Vermont, who was kind enough to let the class visit his shop and learn how these hand-made nails were produced. 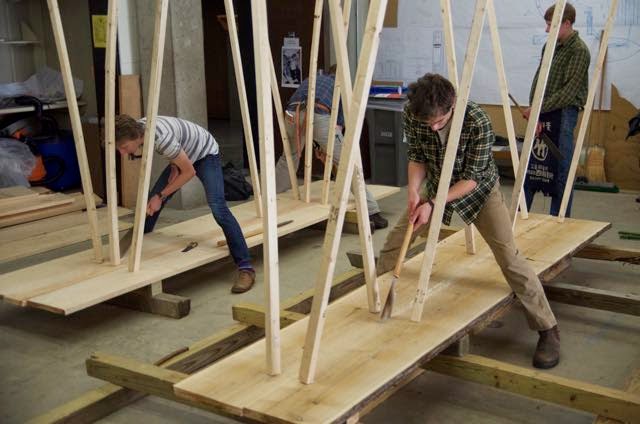 Fitting seams in the bottoms using a series of special handsaws. 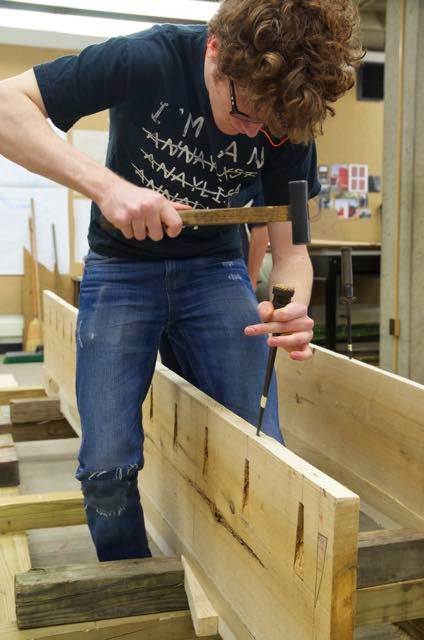 Cutting the pilot holes for our flat nails using a special chisel. 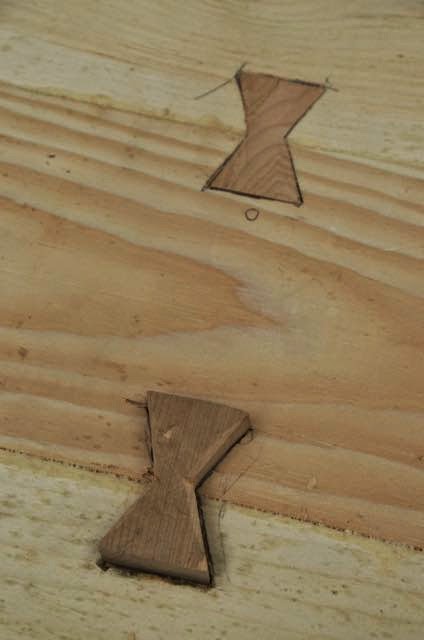 Dovetail keys used on our Kesengawa boat to join the bottom boards. 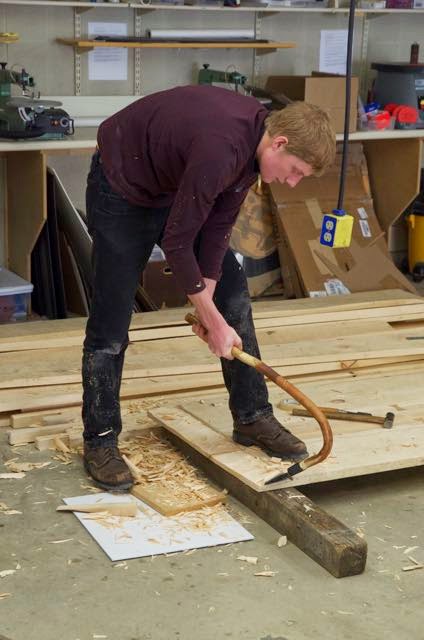 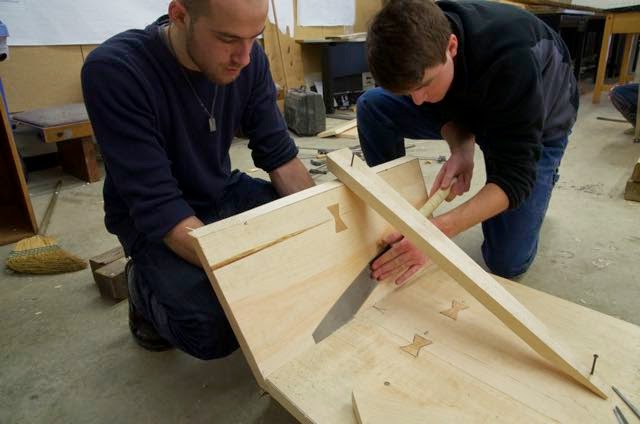 Fitting a transom using a handsaw. 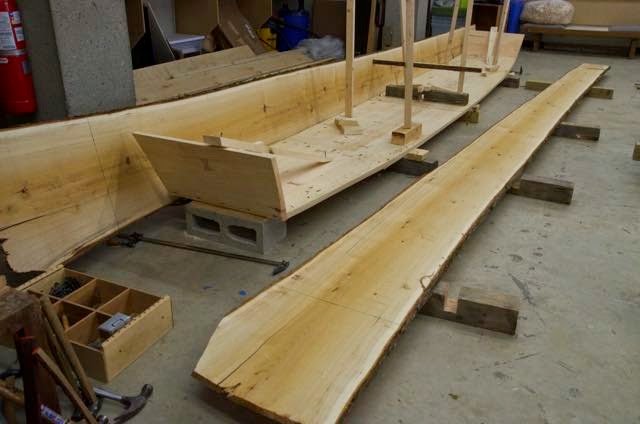 The Kesengawa boat getting her side planks. 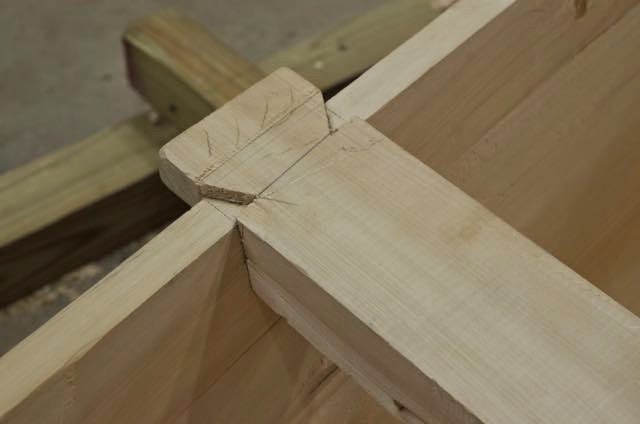 The beams of the Hozugawa boat featured half-lap dovetails let into the side planks. 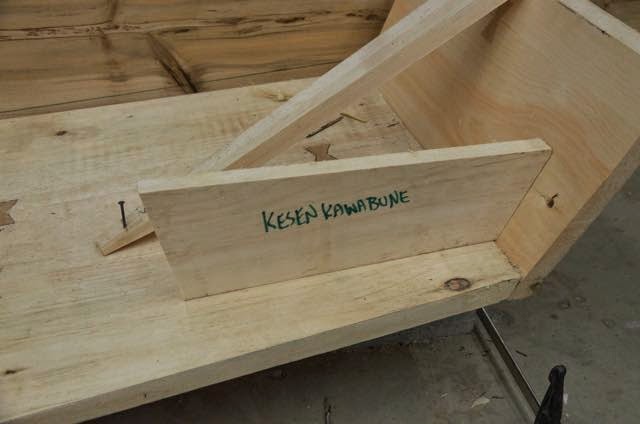 Our pattern records the angle of the transom on the right and the angle of the planking on the left, typically all a Japanese boatbuilder might use to build a boat.  All the principal dimensions would be memorized.  In our case we used plans drawn by a researcher, and in fact many of the dimensions were in easy-to-remember whole numbers.  The planks widths were one shaku, for instance, measured inside.  All the work was done in the traditional measuring system of shaku-sun-bu. 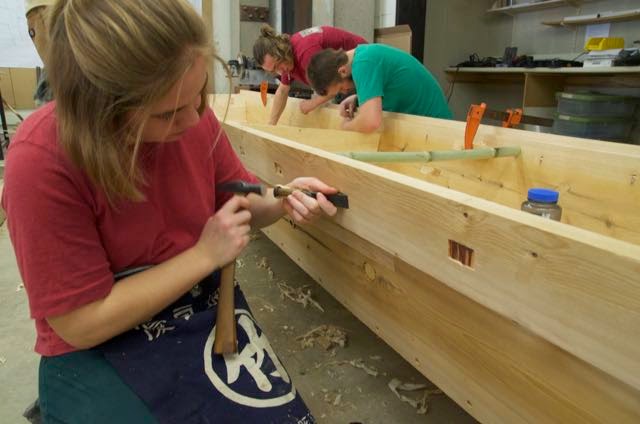 We covered our rubrail nailheads with copper plate. 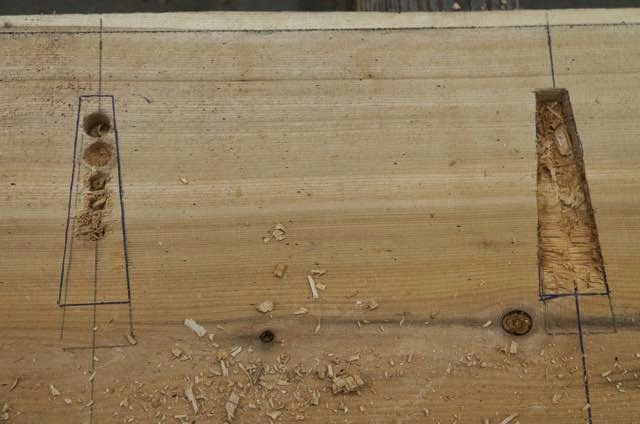 Mortises cut for our edge-nails. 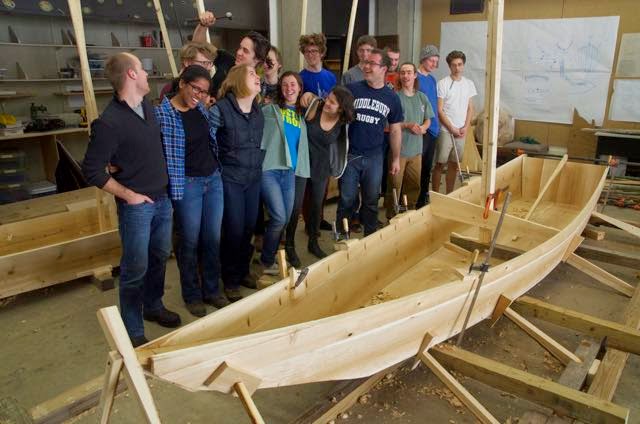 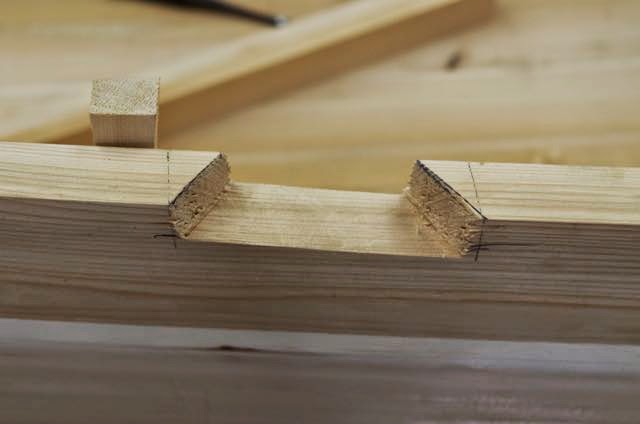 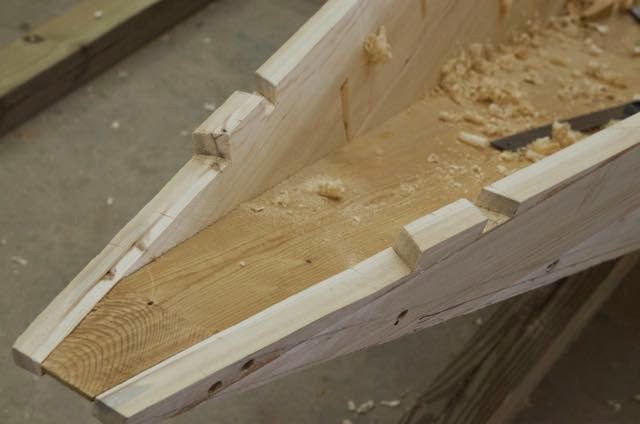 Detail of the bow of the Hozugawa boat, awaiting the foredeck and forward beam. 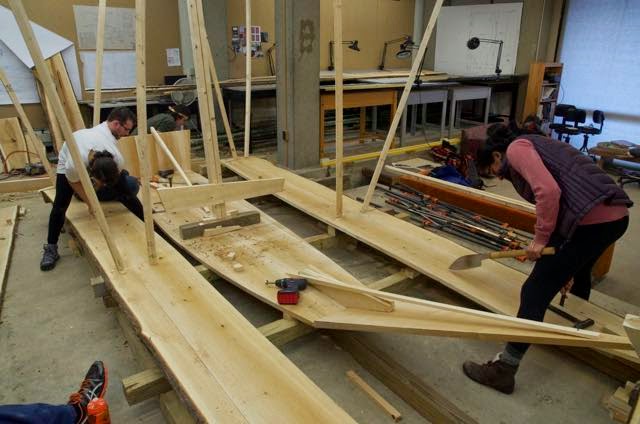 Students fitting the seams of the Hozugawa boat's side planks. 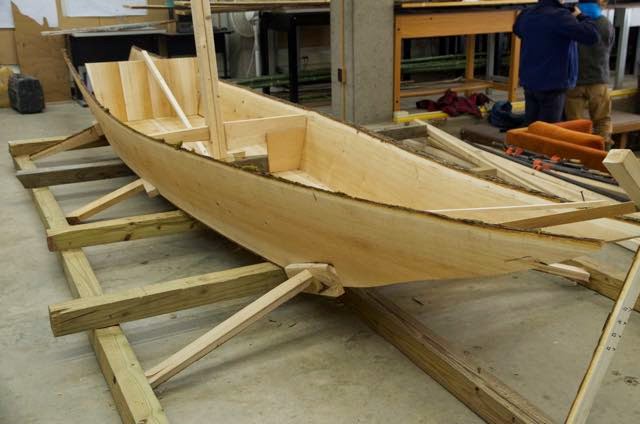 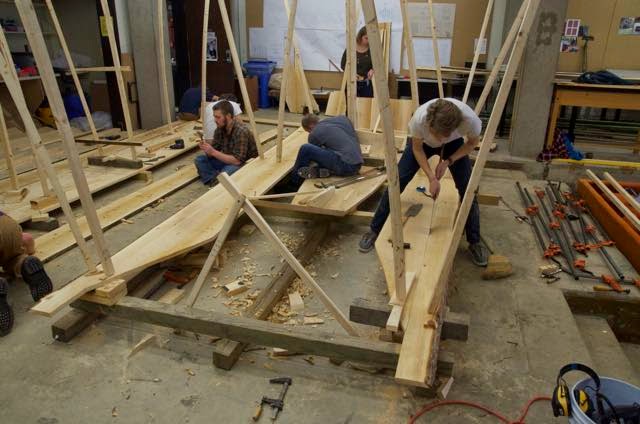 Like Japanese boatbuilders, we worked on the floor, propping materials overhead to hold things in place. 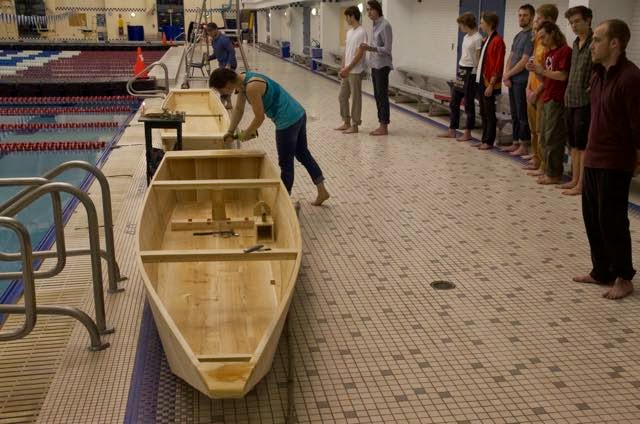 Our launch, in the College swimming pool, began with a traditional Shinto blessing. 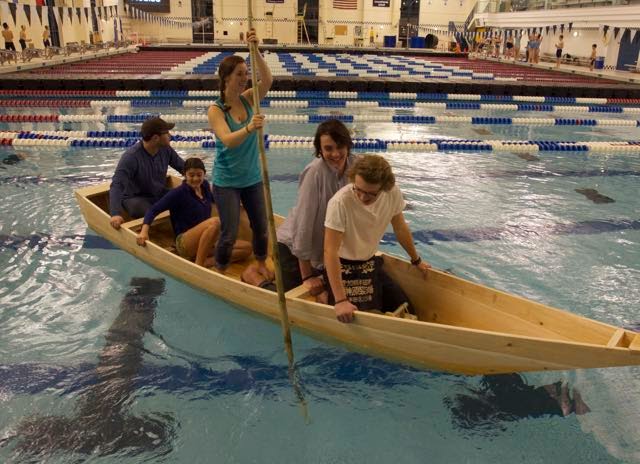 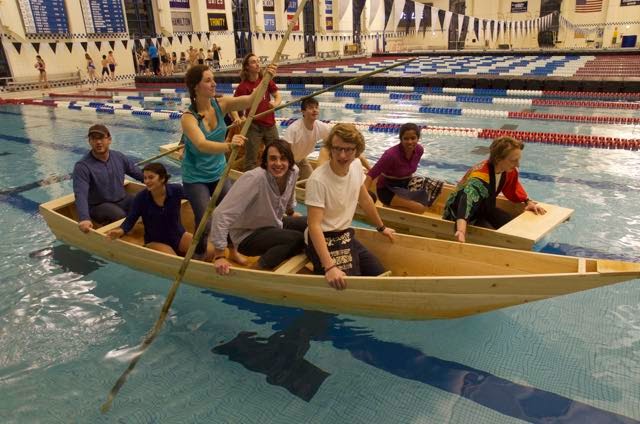 Both our river boats were propelled by bamboo poles. 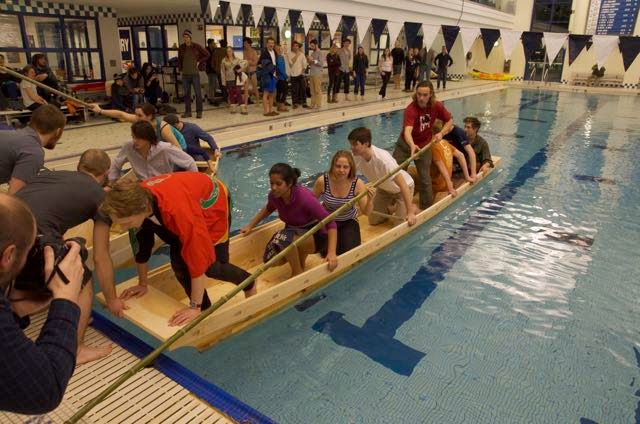 While building these boats I began a conversation with the WoodenBoat School in Brooklin, Maine about the possibility of a summer workshop in Japanese boatbuilding.  Hopefully we can put together a two-week class and teach this type of boatbuilding there next year. 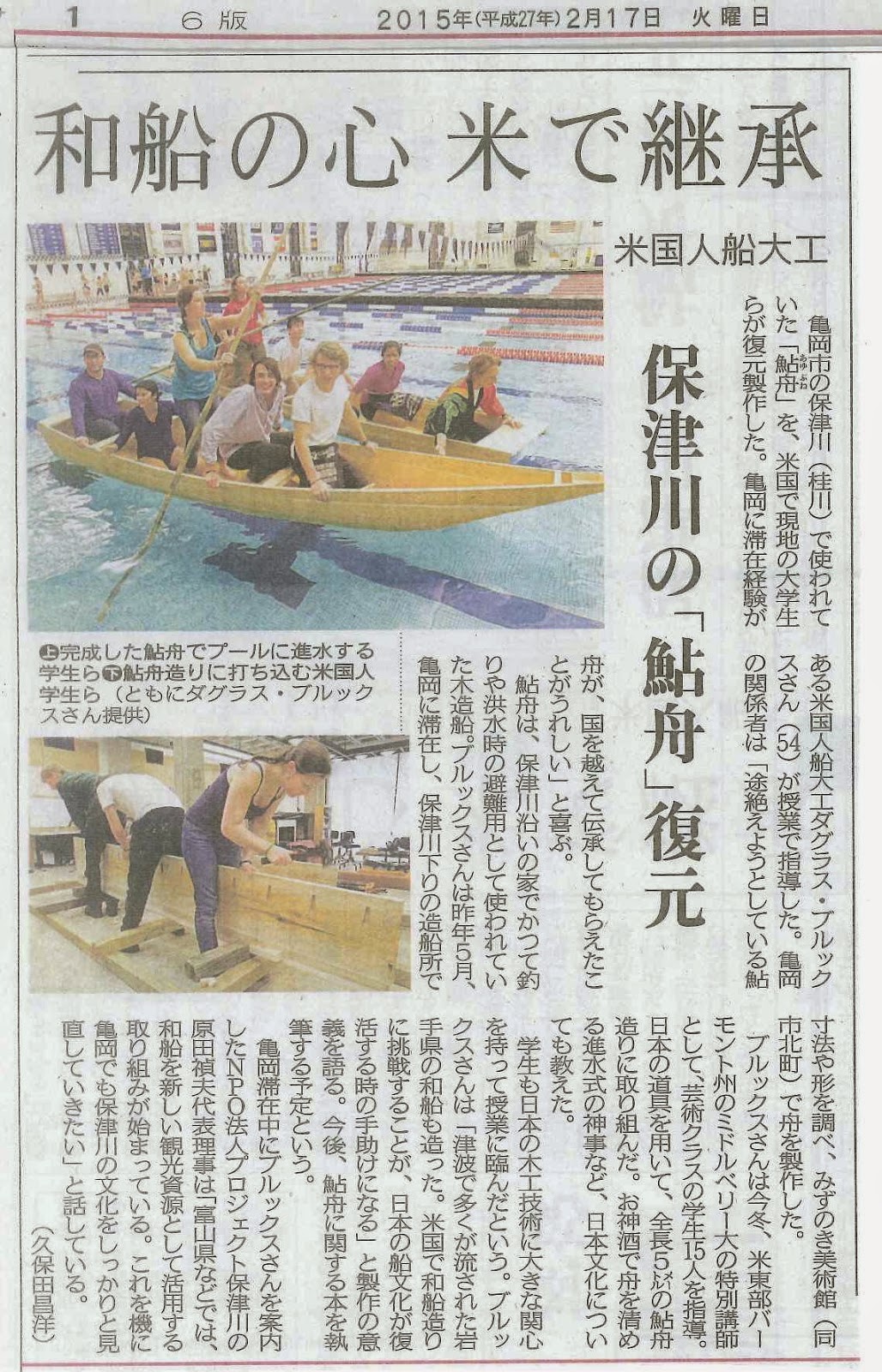 In a very big surprise, in addition to local news coverage a story about us appeared on the front page of the Kyoto Shimbun, one of Japan's biggest newspapers (circulation nearly one million).