Of the sixty-odd boatbuilders I have met and interviewed in Japan, all spoke confidently of distinct differences between boatbuilding and other woodworking trades. This centered on tools and techniques which, they assured me, were practiced by no other craftspeople in Japan. The two most prominent were fitting planks using a series of saws and edge-nailing planks using flat, hand-forged nails. The former uses a special type of saw that is referred to in Japan as a boatbuilders saw. The latter requires a special set of chisels called tsubanomi, or sword-hilt chisels, to cut the rectangular pilot holes. 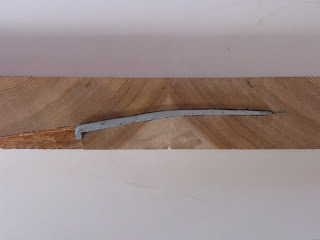 A cutaway model I made showing how planks are edge-nailed.

Japanese boats are generally built with no caulking whatsoever. Normally boats are caulked when they get old and start to leak and the caulking is inserted from inside the hull. This is at odds with western caulking, which is used in most boats during construction, and inserted from outside. Caulking in the west is usually cotton, while in Japan its the inner bark of the cypress tree (there may be only one vendor in Japan at this point still making it).

To make seams watertight boatbuilders prop the planks together and run a series of saws back and forth through the joint. With each pass the planks can be tapped together and the fit become progressively tighter, though at the end the saw blade is run along the face of the plank rather than in an up and down sawing motion. The belief is that scratches from the teeth running across the edge will channel water into the boat, so these must be rubbed off. Moving the saw parallel to the plank leaves longitudinal scratches down the edge which don’t channel water. It is from this unorthodox sawing motion the technique derives its name: suriawase, which mean rub-fit or reconcile. In parts of Japan it is also called surinoko and toosunoko. 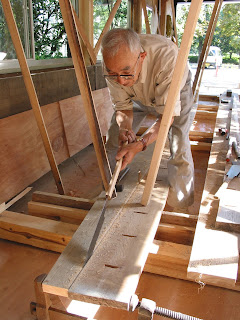 My Tokyo teacher fitting two planks. Note the overhead props and the mortises pre-cut for the nails. 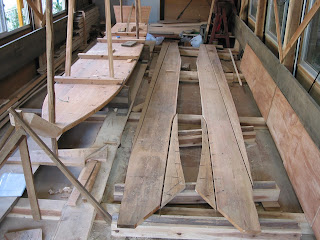 The two side planks of the cargo boat I built with my teacher in Tokyo are each comprised of three pieces. All the seams were fit with handsaws and then the edges carefully pounded before being edge-nailed together. 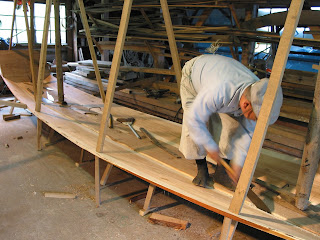 My teacher in Aomori sawing the seam between the first plank and the keel plank. The keel is securely fixed with large props, while the side planks are braced top and bottom and to the sides. 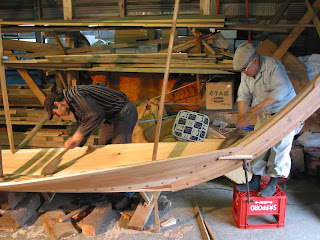 One side has been fastened and my teacher and I fit the seam for the other side plank. My teacher is working the seam in the stem rabbet.

The saws used have a long tapering point. The narrow tip is necessary to fit the saw in tight places such as the stem rabbet. These are all rip saws and some of my teachers had saws in three gradations from rough to fine, moving through all three in the process of fitting a plank. Needless to say these saws have become rare, but just recently I met a boatbuilder in Japan who buys home center saws and simply cuts the backs to the curved shape. (I have facilitated the purchase of boatbuilding saws so contact me via my website if you are interested). 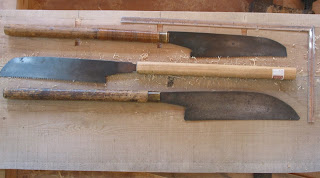 A set of old boatbuilder's saws.

A note about props: boatbuilders don’t use clamps, instead relying on creative ways of propping planks in place or clamping them to low horses on the floor from heavy overhead beams. Clamps would get in the way of this sawing technique, though my most recent teacher used metal dogs to clamp our planking and we had to work around those. 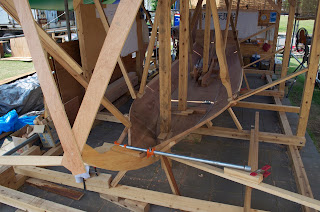 The boat I built with Takumi Suzuki in 2014, showing how complicated it can get propping a plank in place (and yes, breaking with tradition we used one clamp). Moving around the work becomes a real challenge.

After seams are fitted boatbuilders pound the edges with a round faced hammer, depressing the center of the edge while leaving the corners untouched. This technique is called kigoroshi, literally killing the wood. The idea is when tightly fastened the planks will squeeze together and crush the unsupported corners and eventually the wood fibers in the center will bounce back forming an even tighter seal. In the old days some boatbuilders used to put raw lacquer in the seams as a kind of bedding compound, but after World War Two they started using waterproof glue. What they are after is a filler. My teachers all insisted to me glue was absolutely no substitute for craftsmanship and they insisted we create a wood-to-wood watertight fit. 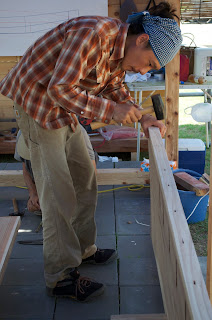 My apprentice Takumi Suzuki pounding a plank edge. Note the nail holes have already been cut. 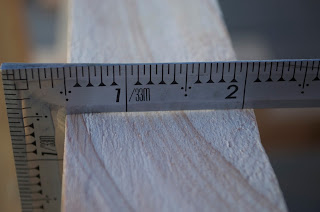 The goal is to make the edge slightly cupped, and not touch the corners with the hammer. This technique is surprisingly hard, physically and technically.

I have also noticed how my teachers placed different emphases on either suriawase or kigoroshi when fitting planks. Some would do very little saw fitting, concentrating much more on a careful pounding of the edges; some would do the opposite.

Japanese boats for the most part are built without frames. Most fastenings are an ingenious system of edge-nails. Nails enter one plank near the edge through a shallow mortise and pin adjacent planks together. The nails have to be curved slightly and boatbuilders have a curved chisel to align the holes. 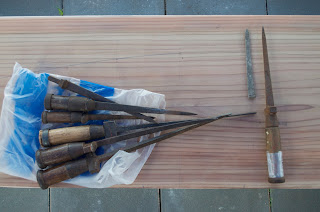 Sword hilt chisels and one flat steel boat nail. A boatbuilder needs a large selection of these chisels to fit different sizes of nails. 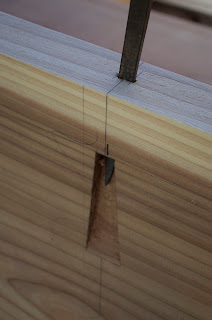 After the mortise is cut for the nail head a rectangular hole is chiseled from the plank edge to meet the bottom of the mortise. 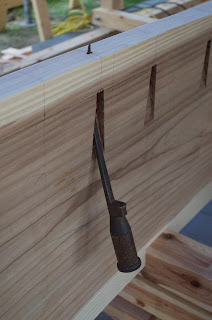 The curved chisel can be used to clean this out. 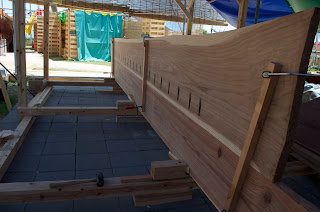 A pilot hole is chiseled in the adjacent plank and then the two planks are stacked vertically for nailing. 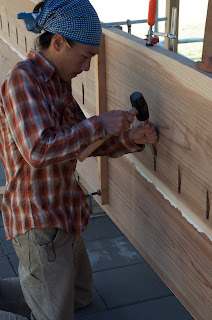 We used a white glue between planks. One needs a long nail set to set the heads in the base of the mortise. 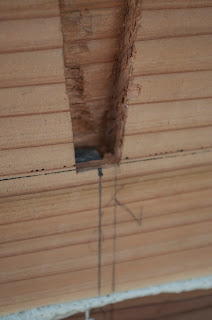 A view of the head of the nail fetched up tight in the base of the mortise. 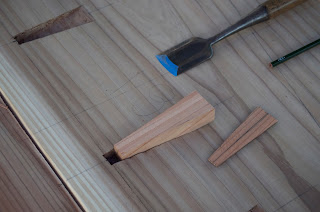 Plugs are cut for the mortises. Most boatbuilders don't use any glue on the plugs, since the grain runs at right angles to the planking they will swell tight in the plank. 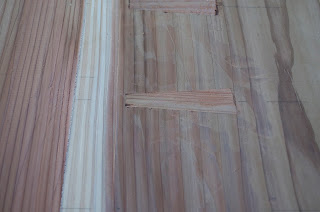 The plugs are then adzed off and the plank planed by hand. 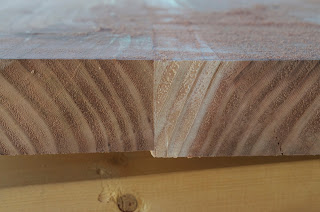 A view of the finished seam. The thicker plank was planed flush.

The hilt on the chisel allows the user to back the chisel out after its been pounded into the wood. I have never seen these chisels for sale in a tool store. Rarely I have seen them in flea markets and antique shops. As mentioned above all my teachers insisted this technique was used by boatbuilders only, but I have seen these tools on display in museums exhibiting temple carpenters’ tools. These craftsmen used square shank nails in roof framing and used this type of chisel to make pilot holes. Coopers use small versions of this tool for the bamboo pegs which hold barrel staves together.

Making both the flat steel nails and the sword-hilt chisels are well within the skills of a blacksmith. These techniques and many more are explained in much more detail in my book Japanese Wooden Boatbuilding, available from my website.
Posted by Douglas Brooks at 3:42 PM