As mentioned in my last blog post, I headed to Brooklyn last week to attend the 2017 KEZ event sponsored by Mokuchi Woodworking. I was invited to do a boatbuilding demo and give a slide talk on my research in Japan. It turned out to be a great event and I was so impressed with the participants' talents and camaraderie. The culmination was a planing contest but while there may have been an undercurrent of competitiveness I didn't feel it. Instead I saw experienced woodworkers advising and helping new woodworkers, and a genuine collaboration of ideas and advice. Yann and his partner Margaret were wonderful hosts.

A national meeting is schedule for this October in Oakland, CA and if you are interested in Japanese tools I encourage you to attend one of these events. Visit the KezuroukaiUS website.

During my talk I spoke quite a lot about apprenticeship in Japan and the nature of this kind of training. Several participants had also apprenticed with Japanese craftsmen and it was great fun comparing notes, though overall we all had very similar experiences with our teachers. As it happens, there is a fascinating article in today's New York Times on a related topic. Well worth a read. 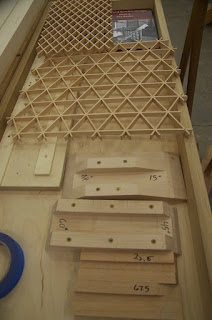 A few participants had set up tables showcasing their work. Here are kumiko, the delicate lattice work found in transoms, made by Jon Billings of Big Sand Woodworking. 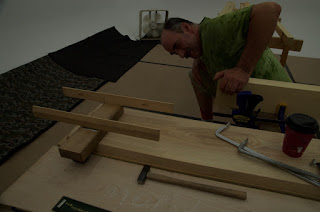 Here a Jim Blauvelt carefully checks for twist in the sole of his plane. He corrects any problems using the Japanese scraper plane, a smaller tool with the blade mounted vertically. Jim has won this contest using a plane blade he forged himself. 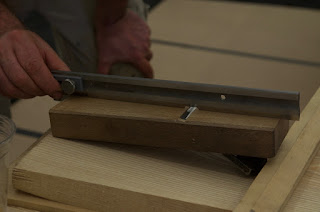 Jim also had a purpose-made straight edge for checking the flatness of the bottom. Actually the bottom of a finely-tuned Japanese plane should only touch the wood at the nose and just ahead of the blade in order to make the finest shaving. If you too want to hone these skills Jim has a workshop coming up: 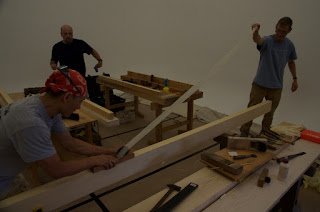 And here Andrew Ren of Ottawa makes a test pass. Eventual contestants in Saturday's contest spent most of Friday tuning, psharpening and practicing on some yellow cedar beams. 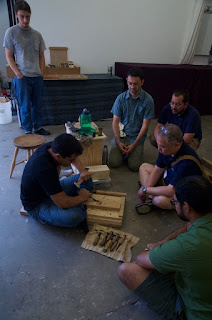 Friday Joshua Villegas demonstrated how to cut a plane body, or dai. A graduate of the North Bennett Street furniture program, he did a six-month apprenticeship in rural Japan with a furniture-maker and learned how to make plane bodies, or dai. I really enjoyed sharing stories about apprenticeship with him. He hopes to move back to Japan to continue his work. 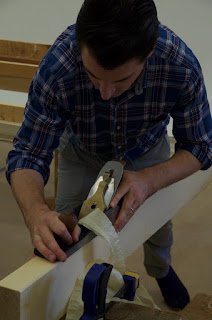 Brian Holcombe trying his hand with a western plane. In fact he had installed a hand-made Japanese blade in this tool. I have Brian to thank for learning about this group, as he invited me to do a guest blog post a couple of years ago and he introduced me to the New York City Kez folks. 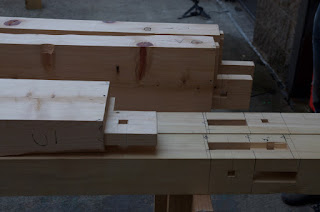 Yann Giguere, our host, led six participants over a 3-1/2 day period before the event cutting a timber frame, and then erected it Friday afternoon. The quality of the joinery speaks for itself. 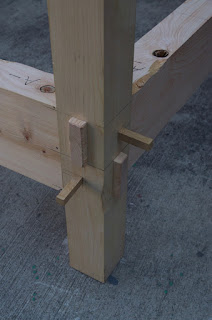 Please visit Yann's website and see his portfolio of work. 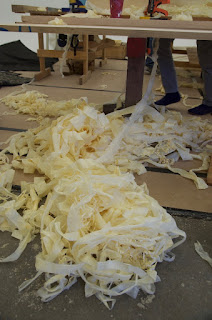 This is just a fraction of the material left on the floor after a day of practice. The shavings are so thin the yellow cedar timbers didn't seem appreciably smaller! 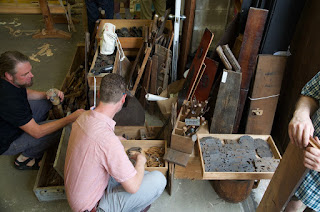 My friend Dane Owen arrived on Saturday with tools and furniture hardware from his store Shibui in Brooklyn. 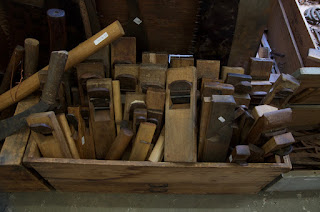 A chest full of planes... 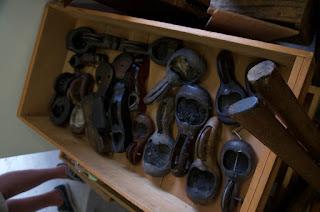 ...and two drawers full of ink lines. He also had antique worker's coats and aprons, along with some big timber saws, axes, and adzes. Search around his website for more or contact him directly. Dane has probably the best collection of antique Japanese furnishings in North America.

Andrew Hunter designs and builds furniture in the Hudson Valley and he exhibited his planes and examples of his joinery. Enjoy looking at his work at his website. 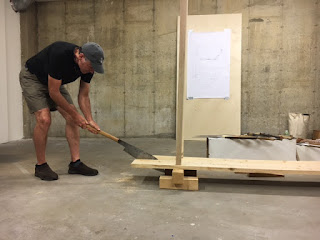 I did my demo on Saturday morning, I set two cedar planks up on traditional low sawhorses and showed participants how boatbuilders fit the seam between them by running a series of saws through the joint. I won't belabor the details (which are many) but you can learn more about this by looking at my website and blog. 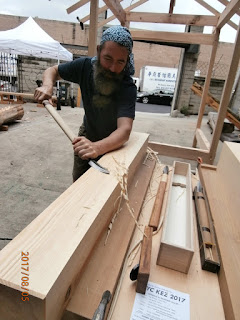 Yann led timber work in the courtyard, splitting a large log as well as sawing with the maebiki. He also let participants try the yariganna, then ancient precursor to the Japanese plane. Here he shows how its done, and then folks try for themselves. 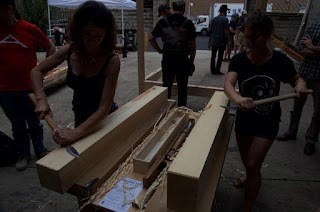 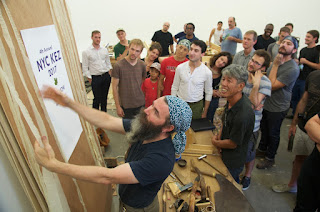 In the planing contest everyone gets four passes, then shavings are measured for thickness with a micrometer (winners are translucent, about half the thickness of a human hair), and they are also judged for being a full-length, full-width shaving. Here Yann is making some judgments on shavings of the same thickness. The winner was Jon Billing, the young man in the brown shirt to the left. He won a $450 plane donated by Hida Tools of Albany, CA. 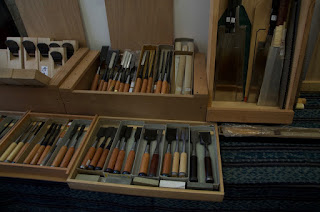 Yann also had fine tools for sale at the event. He also teaches workshops.

Posted by Douglas Brooks at 5:25 AM