This blog has been inactive for a few months because I've been working on a writing project: a book manuscript on building the cormorant fishing boat in Mino, Gifu, Japan one year ago (see blog posts from spring of 2017). I didn't think there would be any interest in seeing blog photos of me hunched over my computer and drawing table. But by great good fortune I was recently invited to Japan to see the annual kaidenma races on Osakikamijima, an island in the the Seto Inland Sea in Hiroshima Prefecture. A group there is interested in creating an alternative university and place-based education, and they wanted me to see the race and talk to them about creating some kind of boatbuilding program. I am very grateful to Ms. Hiromi Nagao for her generosity. 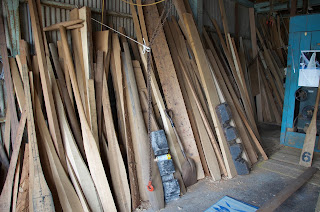 My former college roommate, Nobu Hayashi, picked me up at Hiroshima airport and took me to his home where I had a reunion with his family, the first time I'd been there since 2003. We spent the day together but before he dropped me at the ferry port we visited Seo san, one of Japan's last professional makers of paddles and sculling oars (I only know of one other). He lives and works on Mukaishima Island just a stone's throw from the mainland town of Onomichi. 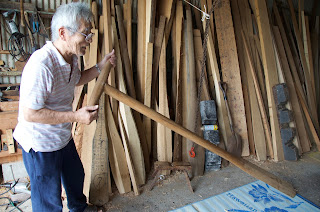 I swear this was the first time I'd met Seo san, but Nobu insisted we'd met him twenty-five years ago when he previously drove me around this region. Either way it was fascinating. I was able to write about Seo san in my book thanks to my friend Linda Ohama, who lives part-time in Onomichi. I presented Seo san with a copy of my book, which has one of Linda's photos of him. 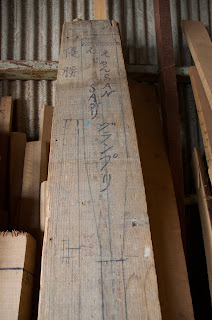 One of Seo san's patterns for paddles. Its very common for Japanese boatbuilders, as well as house carpenters, to draw on wood and not paper. 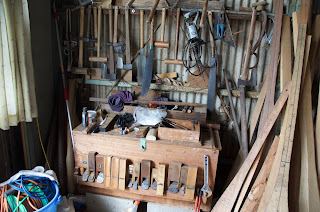 Seo san's hand tools. He also had a huge bandsaw with a rolling carriage, like a small sawmill. He still has some work but he reminisced about his father, who told him he needed to be able to make a paddle or sculling oar (called a ro) in a day. 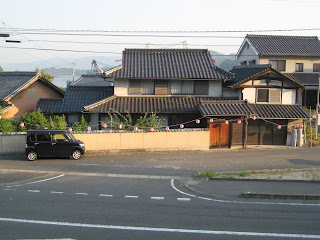 This is where I stayed on Osakikamijima. Like all of rural Japan, the population of the island is falling, from a high of 22,000 to the current population of just 8,000. As a result there are many, many abandoned homes, as well as empty schools (I saw two large abandoned schools), shops, etc. Its an enormous challenge but its a snap to find housing. This was a great traditional house. 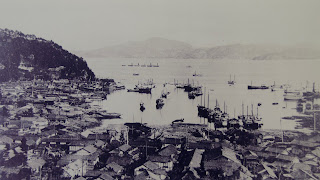 These islands were historically very important way stations for the massive numbers of ships that passed through the Inland Sea. Even today the water's are like a highway of small cargo vessels. As a result the island teemed with shipyards ready to build and repair trading vessels. Also the Inland Sea has fierce currents and winds so harbors were busy with vessels waiting for tides and weather to change. 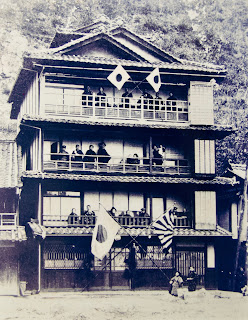 This was a "pleasure house," a euphemistic term for an establishment entertaining sailors. I was told the ability to erect multi-story wooden homes was the result of skills developed by shipwrights in the region. 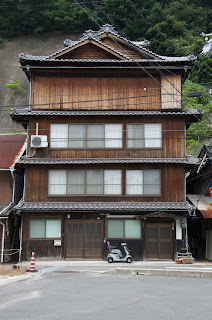 The very same house today. Apparently its owned by an elderly woman who still lives there. 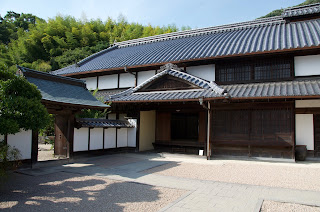 The island's old house museum is exquisite and recently restored. It was donated to the town by the descendants of the original owner who was a shipping magnate. 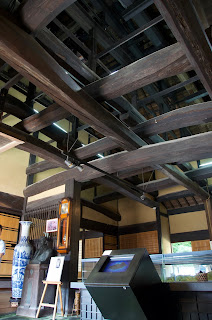 Massive beamwork typical of traditional wooden homes in Japan. This is the former kitchen area and the beams have been blackened by smoke from cooking fires. There was no chimney except for a small opening in the roof to let the smoke out. 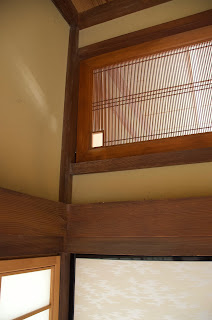 Our guide asked us what we thought this little hole was for. Its in the ranma, or transom above the door opening between rooms. As I entered this room I noticed signs of a mouse having chewed some of the delicate woodwork so I knew the answer. 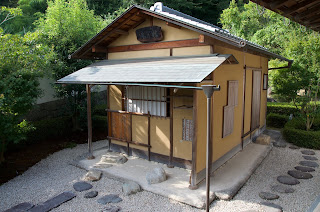 A lovely teahouse just outside the main home. The tiny square door to the lower left is the traditional entrance. It forces people to get on their hands and knees to enter the teahouse, some say fancifully this was to prevent samurai from drawing their swords but in truth it is about humbling all who enter what is a kind of sacred space. 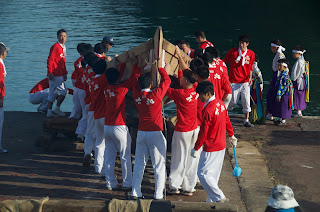 A team launching their boat for the day's racing. Today four villages on the island gather in a main harbor for the annual races. There is documentation establishing a history of at least 180 years of this racing. The boats are based on fast warships of an even earlier era. "Kai" refers to the paddle and "tenma" is a common name for a work boat, hence kaidenma. The races used to have teams from eight communities, but depopulation has forced communities to drop their teams. 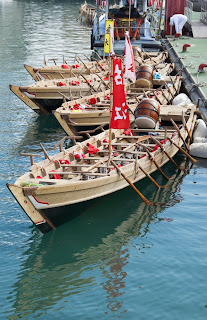 The four boats. In the background you can see the mikoshi, or portable shrine, which was carried from the main shrine and to the harbor for the festival. A drummer pounds a beat for the rowers while the helmsman, wielding a large paddle as a rudder, exhorts the crew. 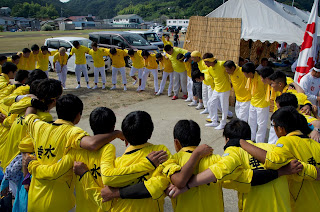 There is no lack of seriousness and competitiveness on the part of the teams; they are racing for local pride. The rowers are all young men, with former crew acting as elders advising their training. The exclusion of women goes back to a belief that the god of the sea is female, and if she sees a woman on a boat she will become jealous. Needless to say, including women would help solve the problem of the shortage of rowers... Maybe in time. 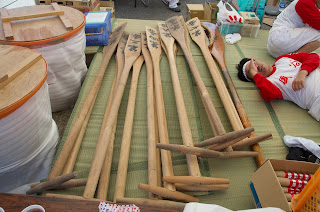 Luckily there are enough young men for multiple teams and five different races throughout the day including an elder's race. Teams rest in between. Note the extra paddles brought in case some break. 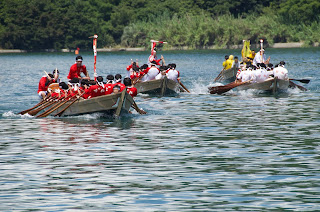 I was struck by how closely matched all the teams were. The boats stayed very even with each other and most races were won or lost because one or more boats collided rounding the marks (apparently no system of disqualification) which set them back and gave the winner an unstoppable advantage. The only restrictions on the design are the number of rowers (fourteen) and the overall length (11.1 meters or 36 feet, 5 inches). 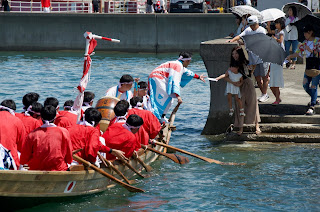 After races boats come up to shore and accept cash gifts from spectators. 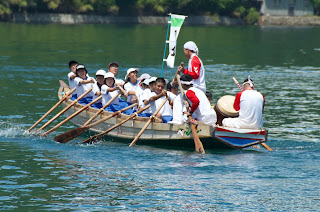 Happily in the afternoon there was a junior high school race and with teams of boys and girls.

The main race was saved for last. The boats race a 2 kilometer out-and-back course rounding a small island. I was told the boats can reach a speed of eight knots which means the fastest races last about fifteen minutes. 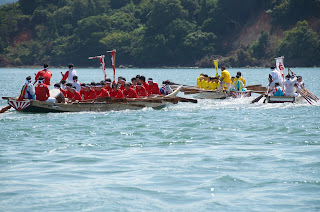 Beginning to round the mark. 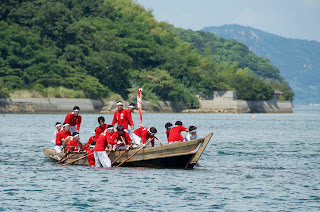 This boat tried to round the island inside the others and ran aground. 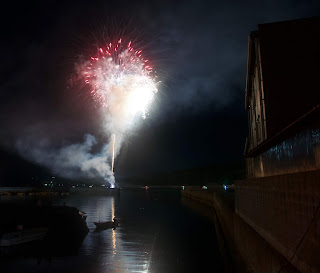 The festival ended with fireworks. 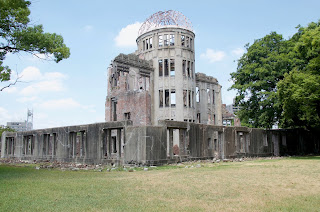 The day after the race I visited Hiroshima. On my first trip to Japan in 1990 I stood in this same spot and photographed the Atom Bomb Dome. I visited the nearby Atom Bomb Museum for the third time. Each time the exhibits and tone of the museum have been completely different, which speaks to the politics embedded in this story. I feel like the current iteration is the best, and there is currently an expansion of the museum underway. 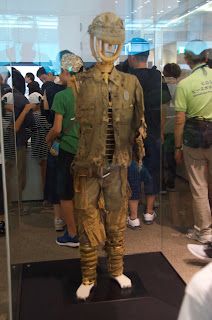 One section of the museum displays objects recovered from the atomic bombing. They only display material linked to a specific person, in this case the school uniform of a young boy killed in the bombing. The exhibit includes family photographs of the child and his story, where he was when the bomb detonated, and how his body was recovered. In my opinion this is the most powerful exhibit in the museum, providing a very human face to the victims, one that draws you in more so than graphics and statistics. 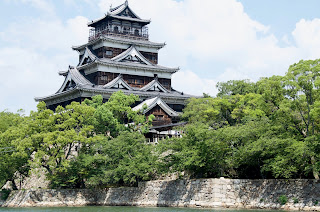 Hiroshima Castle, a reconstruction since the original was completely destroyed by the atomic bomb. 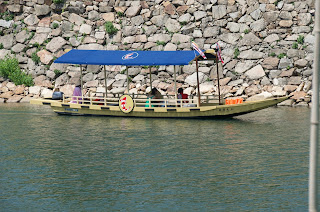 In the castle moat a fleet of traditional wooden boats give tours. 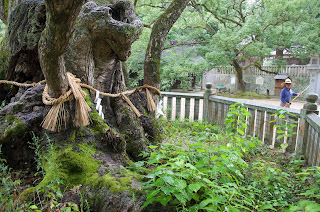 My host took me to nearby Omishima Island to visit Oyamazumi Shrine, a important shrine for sailors and shipbuilders. This 3,000 year-old camphor tree stands at the entrance to the shrine. Portions of the main shrine building date back to about the year 1400. The last reconstruction was in 1953. 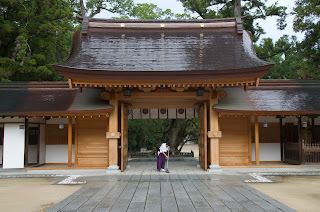 The shrine also has the finest collection of armor and samurai swords in Japan, many of which are designated National Treasures (no photography allowed). More information about the shrine and one photo of swords can be seen here.

A parting shot from the ferry boat. I am hoping to develop some kind of boatbuilding project here working with various organizations on the island. One team wants a new kaidenma boat which would make a perfect project, since the island's boatbuilder has passed away.
Posted by Douglas Brooks at 2:19 AM