My first stop after arriving in Kyoto was the Tourist Information Center where I picked up a city map. I saw some posters for Fushimi Inari Shrine, a place I'd never visited. They showed it in the snow, with suitably gorgeous photographs. As it turned out, that night Kyoto had snow, and when I saw the next day had dawned clear and crisp I thought Inari Shrine was the place to go. 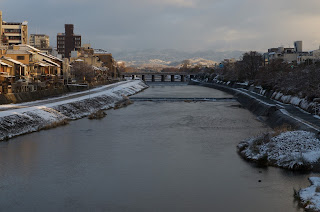 The shrine is famous for the thousands of torii gates that form tunnels on the paths leading up through the shrine complex. Its also famous for its veneration of the kitsune, or fox, and statues of foxes are everywhere. 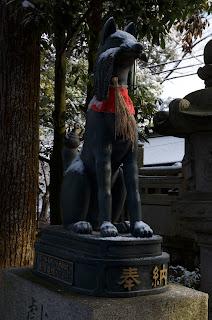 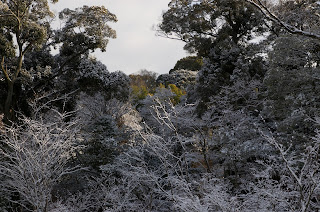 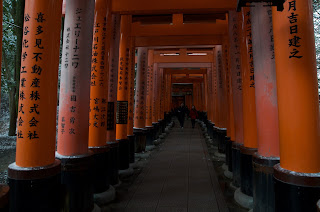 The writing on gates denotes a donor. 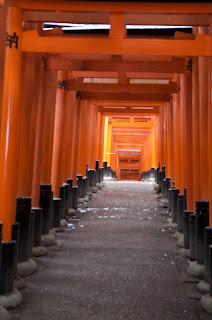 Anyone who saw Christo's remarkable installation in Central Park of vermillion gates realizes he had to have been inspired by this. 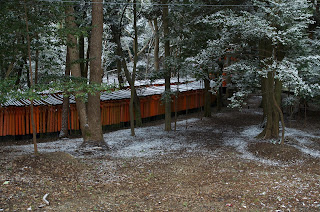 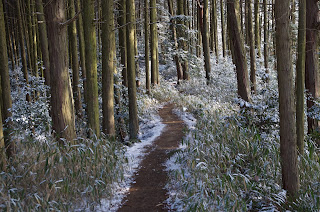 I found a side path up to the top of the mountain, which passed through meticulously cared-for groves of timber bamboo and cedars. 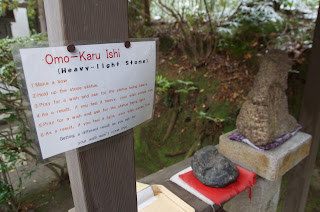 You lift the rock and make a wish, and if it becomes heavier or lighter your wish is given. 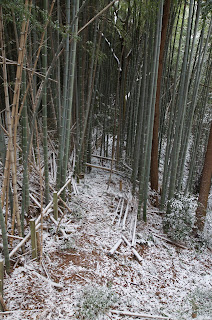 That afternoon I took a short train ride through the mountains to Kameoka. I built a small river fishing boat here in 2014 that I wrote about starting here. The main tourist business in Kameoka is the Hozugawa Kudari, a fantastic river boat journey through the mountains from Kameoka to Arashiyama, at the northwest corner of Kyoto. I heartily recommend it for a spectacular glimpse of wilderness Japan.

Seven years ago the boatmen of the Kudari began studying how to make the traditional log rafts once used to transport timber from Kameoka to Kyoto. The history of the rafts may go back 1,200 years. At the time there were two men left alive with first-hand knowledge of how the rafts were built and used. The last log runs were in the mid-1950s. In 2008 they produced a video of the building of their first log rafts. 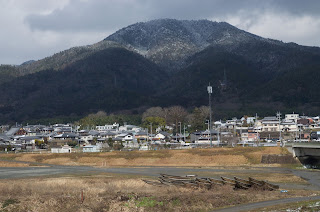 View of the old district of Kameoka, called Hozu, like the river. 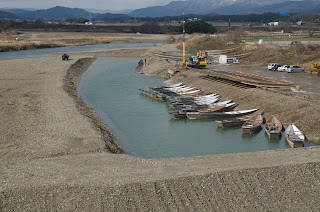 The tourist boats in their basin. The day's event was to build a log raft and take some practice runs down the basin. The group only occasionally makes actual downriver trips due to the danger. 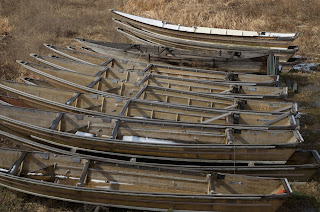 The current tour boats are fiberglass, but based on the traditional design. You can see one wooden boat near the back. The traditional boats had uncharacteristically narrow bottom planks, an effort to facilitate repairs. Given the punishment the boats take unfortunately its just not financially tenable to use wooden boats. Tour boats have operated on the Hozugawa for 400 years. The company makes one new fiberglass tour boat each winter, retiring an old one. 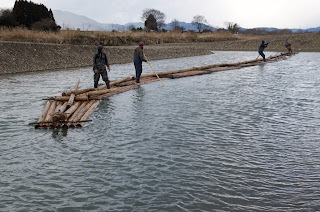 The log raft is made of twelve sections and is 150-feet overall. This was the traditional size and length at least as far back as the Edo era, according to surviving written records (about 1700). 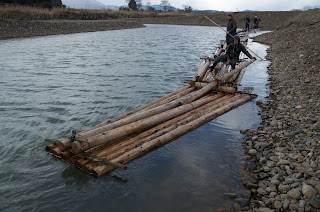 The forward section is built with a tiller to steer the raft. The lashings are wisteria vine. The only metal fastenings were hand-made staples they run the vines through. Those were made by a local blacksmith, a man I was fortunate to get to know. On this visit I learned he passed away last August. You can see him on this video making the staples for the log raft group. 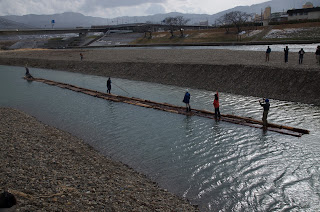 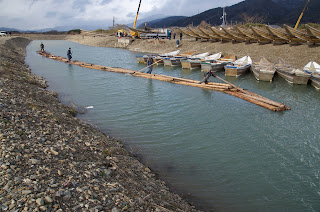 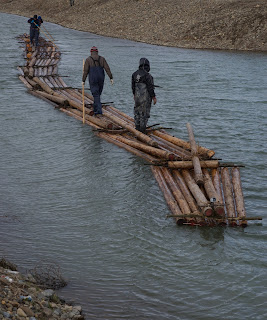 These rafts are all made of a single layer of logs. Back in the days moving timber these sections might be three or four layers deep. The names of some of Kyoto's major avenues reference the days when massive volumes of timber were transported there. 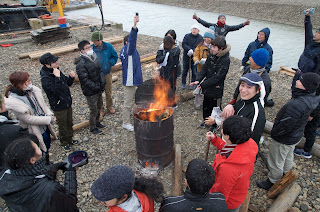 A group of university students was on hand with their anthropology class for the event. The boatmen published an excellent book on the history, design, and construction of these boats.