Here are some shots from our last week in Japan. The very last work I did on the boat was build a bailer, something Nasu insisted I make for the boat's new owner. 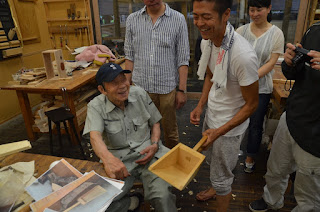 Here is Nasu san, seated, having a laugh with the owner. He'd brought in a bailer based on the local style. 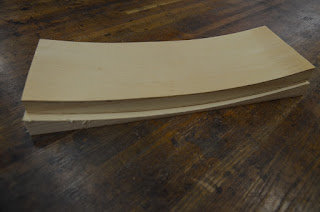 I decided to build a variant I'd seen when Nasu san took us to Seki to study the cormorant boats there. I need a thick piece of wood in order to bandsaw the curved bottom, so I laminated two pieces of our scrap koyamaki together. Here is the bottom, planed. 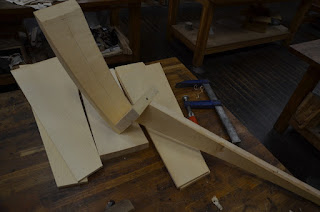 The feature of this bailer is its long handle. It might seem bizarre but when you consider the ease of bailing from a standing position it makes a lot of sense. 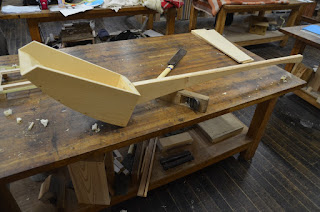 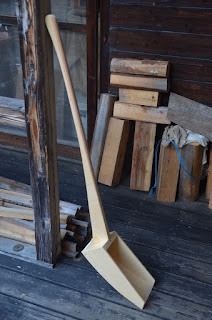 It turns out this type of bailer is not traditional. Nasu san said a Seki customer asked him for one so its a design a cormorant fisherman came up with. 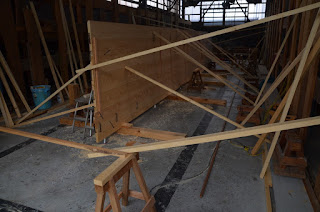 Then we visited the Gifu City shipyard, where they build the tourist boats which watch the cormorant fleet fishing. Very similar to what we did on a much larger scale. They were finishing the bottom when we arrived, building it on the vertical just like we did. 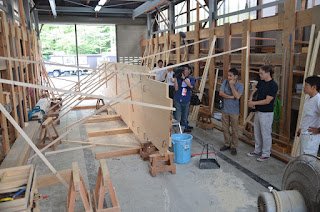 The facility is fantastic, with a large space, overhead crane, machine rooms. etc. Just a handful of workers build these boats. Production is about one new boat a year so the boatbuilders also work as boatmen for the tourist fleet. 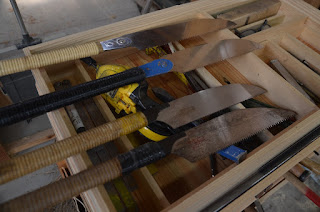 The boatbuilder didn't own any purpose-built boatbuilding saws, so he took standard ripsaws and cut the backs to give them the same tapered tip. 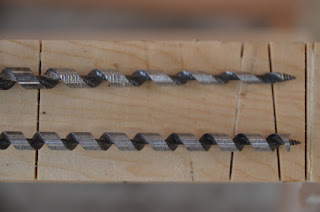 He also had a machine shop grind standard drill bits to make large tapered bits. He pre-drilled holes and then used the moji to finish them. Like us, he was looking for ways to get around the slow process of piloting holes with just the moji. I asked him if he'd ever thought of screw fastening the boats. Years ago one tourist boat was built with screws as an experiment and the boat is still going strong, but the boatbuilder had a theory the hulls need a certain amount of flexibility and he felt only nails provide that. 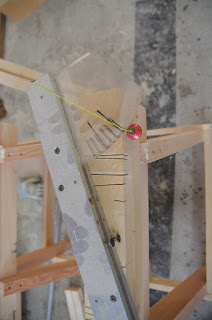 Look closely here and you will see the shipyard's updated take on the sagefuri. The plumb bob and string swing against a plexiglass window with the proper angles for the string pre-marked. Very slick. 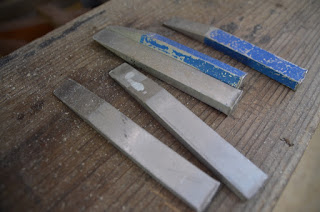 We used bamboo wedges to open our seams when sawing through the joints; the shipyard uses aluminum wedges. Again, very smart as there is much less danger in damaging the teeth of the saw if you inadvertently hit the soft aluminum, though the same is true of the bamboo wedges. 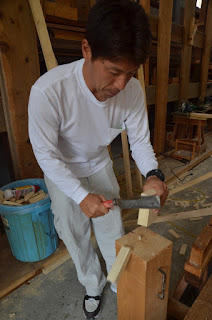 He used the nata, or hatchet, to rough out his plugs. Nasu san used an axe. 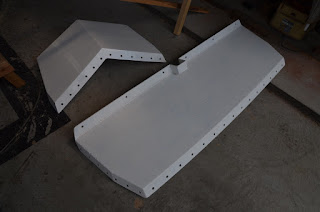 The tourist boats have steel transoms through-bolted to the hull. 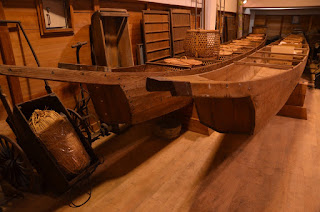 Just down the road from the shipyard is the Gifu City Museum, where the curator showed us two cormorant fishing boats in storage. There were slightly shorter than our boat, but with significantly thinner planking. It was unclear exactly how old they were, but at least forty years old. Nasu san later explained the boats got heavier scantlings after the fishermen adopted outboard motors. 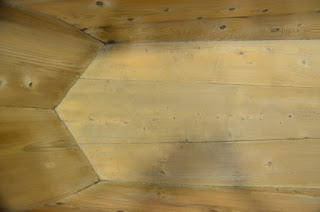 Note how the center plank of the bottom flares at the transom. It might seem like unnecessary extra work to fit those seams but when you do this with a handsaw rather than a plane it doesn't really matter. 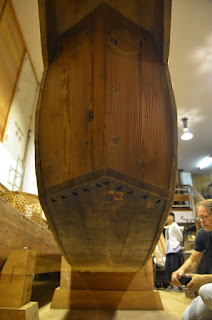 Note how the edge of the side planks form a slight lip, which acts as a kind of rubbing strip for the bottom. Nasu san explained to us as this material wore down he could pull the nails in the center of the boat, push the bottom up and re-nail, creating a renewed lip. It seems like an extraordinary amount of work, but for some reason Nasu san rejected the idea of simply adding a rubbing strip. 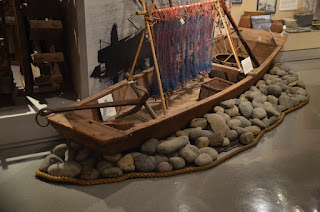 We visited a local museum and measured two boats: first a small fishing boat from the Kiso River... 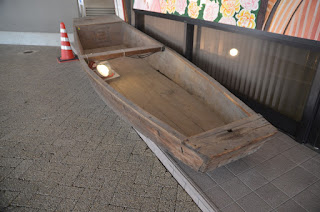 ...and an agebune, or "hanging boat" a type kept hanging in barns by rice farmers for use during seasonal floods. 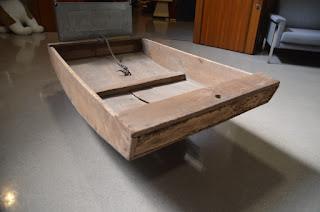 The museum also had a small tabune, or field boat, basically a sled to pull your gear through the rice paddy. 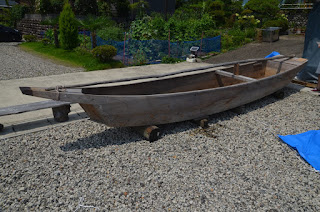 At Nasu san's house we measured one of his small fishing boats, one he built for himself three years ago. 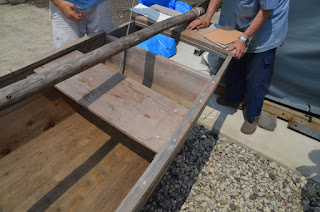 The inner plank on the rear deck is removable, so Nasu san could clamp an outboard to the transom. 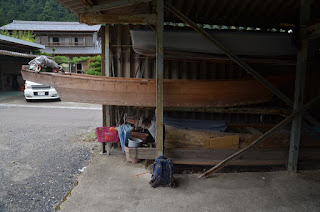 Finally, we traveled upstream to a restaurant to measure the smallest of Nasu san's fishing boats. The restaurant commissioned Nasu san to build this for its rental fleet. The owner told us the boat below was built by Nasu san's father fifty years ago. It was configured exactly like a cormorant boat only it was just fifteen feet long. 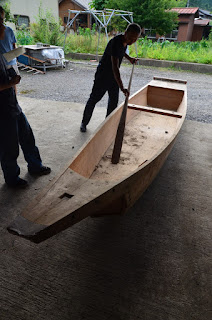 A view of Nasu san's little fishing boat. Interestingly though this boat is quite small, the planking was the same thickness as in the boat we built. Except for the transoms, Nasu san used one thickness of material exclusively. Our student Satoshi san now plans to build one of these with Nasu san's help.
Posted by Douglas Brooks at 7:46 AM