Seven weeks of looking at cormorant fishing in Asia end here in Guilin, China. I hired an interpreter and guide to take me to see a fisherman on his traditional bamboo raft on the Li River at dawn. 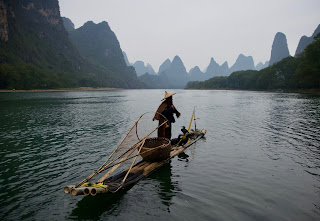 Guilin if famous for the karst mountains which form the Li River Valley. Its truly a stunning landscape. Today fishing is strictly regulated by the government for conservation, so the cormorant fishing is basically staged for tourists. 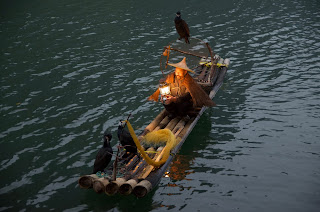 Our interpreter had arranged for us to meet Blackbeard (as he calls himself), who maintains a traditional bamboo raft and keeps cormorants. I will admit this is staged but again, its really no different from what exists in Japan. 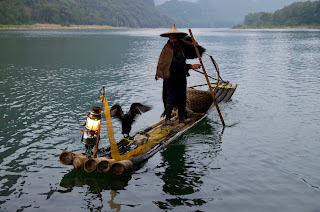 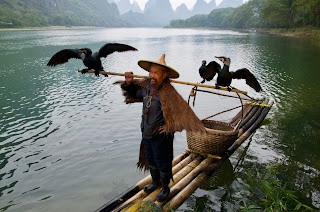 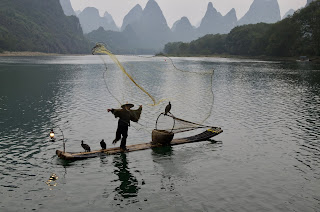 Blackbeard demonstrated throwing the round net. 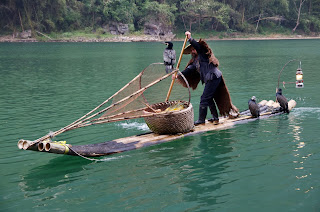 The large basket stored on the bow of the raft is basically a fish trap one can plunge into the water. Note the charred sections fore and aft where the bamboo was bent with heat. 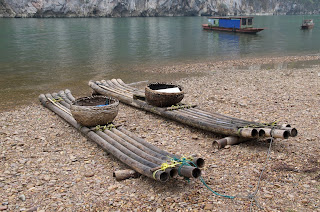 Despite the staged nature of all of this, there are actually a large number of bamboo rafts in the region. After meeting the fisherman he agreed to join us later at another spot on the river to learn about bamboo raft making. 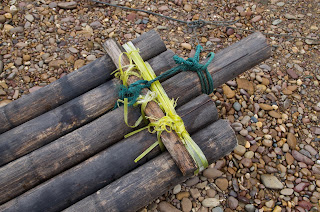 The rafts are lashed together at the stern using plastic strapping. At the bow (the butt end of the bamboo) they are pinned with a wood or metal pin. This is because the bow of the boat needs to be stiff, while the stern can be more flexible. 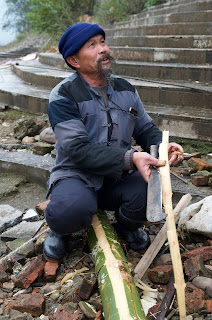 Here Blackbeard is showing us how the bamboo is stripped of its skin prior to bending. The two most technical aspects of building bamboo rafts is bending the bamboo fore and aft using fire and maintaining the raft so the hull doesn't dry too quickly and crack. 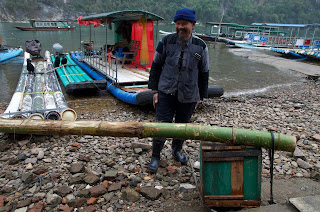 Blackbeard showed us how you hang the bamboo by one end then apply fire to bend the material. 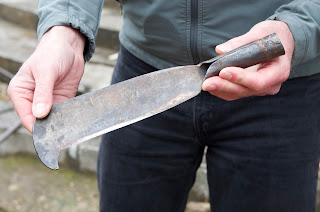 This tool, used to strip the skin of the bamboo, is just like the Japanese nata. 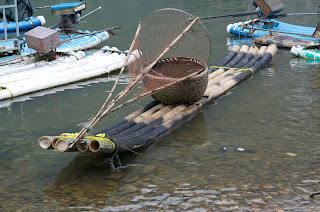 A traditional raft on the shoreline. The basket is traditional for cormorant fishermen as is the fish trap. Note the rafts in the background made of plastic pipe. 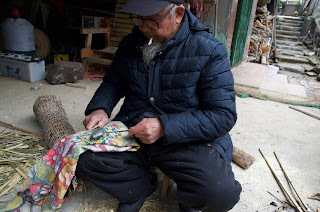 Blackbeard was kind enough to introduce us to his brother-in-law, who makes bamboo fish traps. 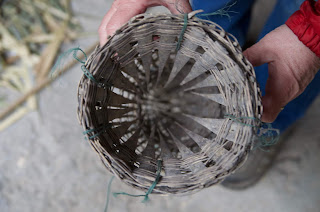 A look down the mouth of the trap, which has layers of spikes to keep the fish inside. 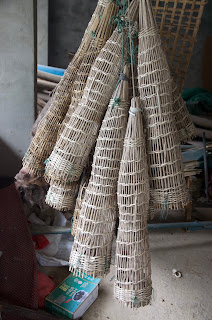 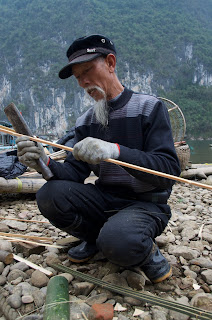 The next day we met a bamboo basket maker, and he started a cormorant basket for us. 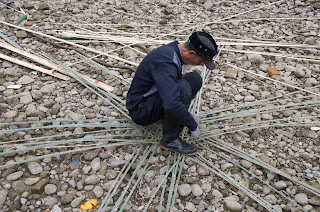 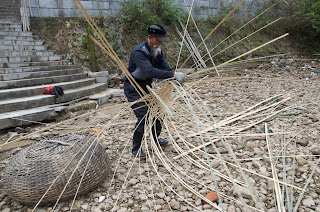 Having woven the bottom he starts the turn the strips upward and begins to weave the sides. 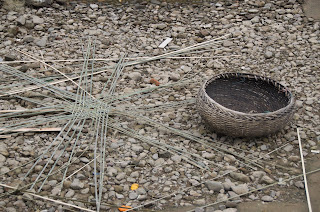 The start of the basket and a finished basket. I am now in Shanghai and I saw a tourist video showing a boat with cormorants in the river village of Fengjian, so I might make an effort to get there.

Posted by Douglas Brooks at 3:07 AM