After leaving Nagasaki I drove through a series of islands to get back to Kumamoto Prefecture. I wanted to head up the Kuma River (Kumagawa) and see if I could find any cormorant fishing boats. I knew of a downriver boat company that still used wooden boats. 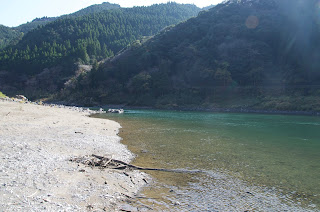 Like all the rivers I've traveled in Japan this trip the Kumagawa was gorgeous: crystal clear water and stunning scenery. 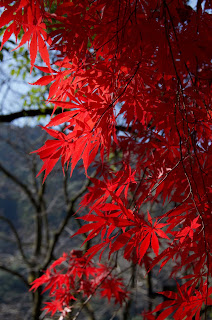 No wonder the Japanese maple is so celebrated. Here its December and they still hold the height of their colors. 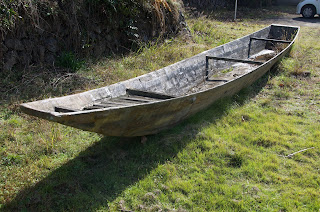 Outside of the town of Hitoyoshi I found this boat at the side of the road. From what I have learned this trip a classic river boat design: long and narrow with a wide, plank bow, a simple three-plank cross section, and just a few beams for framing. I love them all. 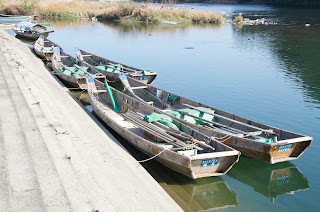 Here is the tourist boat fleet. In talking with the boatmen I learned there was no cormorant fishing in this area and also they no longer have a boatbuilder who can supply them new boats. I found one in fiberglass. I made it clear to them I'd be more than happy to discuss building them new boats. 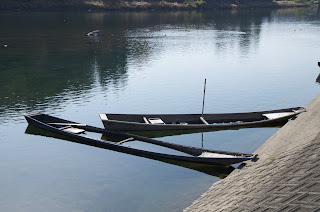 Nearby were several fishing boats, the same type I'd seen at the side of the road. The boatmen said these were fishing boats and the fishermen used nets to catch ayu. 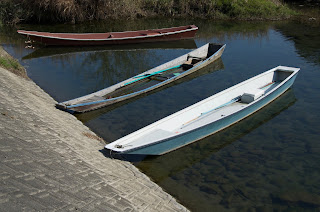 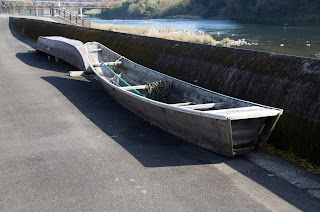 I was trying to figure out how I'd measure a swamped boat (I've already baled a couple of boats to measure them) when I found these two up on the waterfront road. 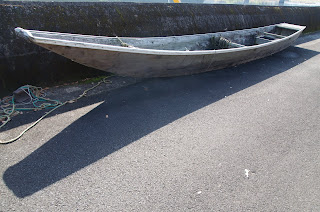 This boat had a couple of slight differences from the derelict boat I'd seen at the side of the road: The bow plank is slightly curved and also has a very slight hourglass shape, something I only realized when I measured it. Also this type has much more sheer than the other river boats I've seen this trip. 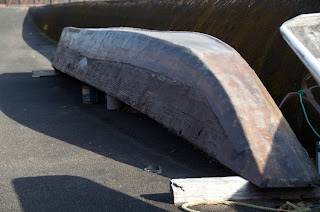 In this photo you can see the curve of the bow (in profile) and also make out that hourglass. The bottom of this boat is covered in fiberglass. But the most interesting thing is the hollow in the bottom. If you sight down the chine you can see how in the middle of the boat the bottom rises up slightly. I might have taken this for deterioration, but luckily a fisherman I talked to in Shimane (see my earlier blog post on the cormorant boats of the Takatsu River) told me about this feature. Later someone told me the reason was the hollow traps air and provides buoyancy, an explanation that I don't think holds much water. However yesterday a cormorant fisherman in Hita, Oita Prefecture (subject of my next blog post) told me this makes the boat easier to turn. He said working alone one stands all the way in the stern of the boat, lifting the forward half out of the water. In a sense the bulge in the bottom aft is the only part of the bottom immersed, and it acts like the rocker of a smaller boat, providing turning ability. 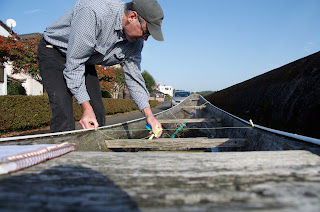 Here I am measuring a cross-section. I've been assuming builders' stations were located at beam locations, and indeed at these spots most of the dimensions are easy-to-remember numbers. This is typical of Japanese boatbuilders, who have to memorize dozens of dimensions. Also this trip it continues to be confirmed that river boat builders never used drawings. 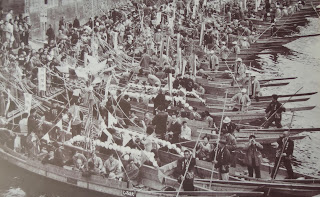 Historic photo from fifty years ago showing the fleet of boats of the tour company. They are down to just six now. Sad, because a river ride would be a gorgeous trip. They couldn't take me because they said they needed at least four passengers to ballast the boats safely. 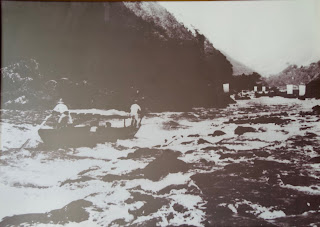 An even older photo. Boats have been taking tourists downriver for one hundred years, though obviously the river was a vital avenue for moving cargo for much longer. Note the sails in the background. 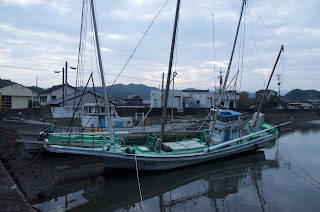 Back to the coast and heading north toward my next cormorant fishing river, I stopped to see the fleet of utasebune, sailing trawl fishing boats. These are very dramatic boats and there is still a small fleet fishing. This one was grounded waiting for the tide to turn. Note the two long spars laying on deck. You'll see in the following photos how they were used. 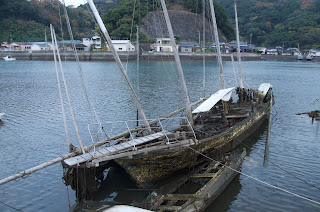 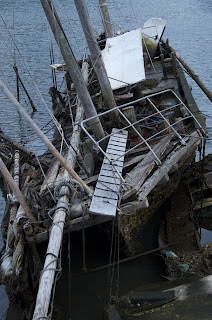 I noticed all the gear was still on board. No one bothered to strip the hull of useful material. 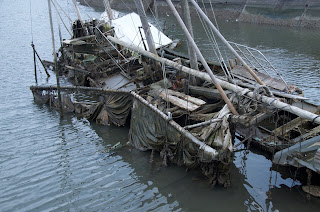 The sails were still hanked on! 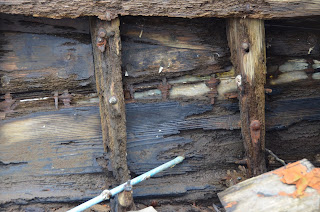 Another derelict showed details of construction. The hulls are built of thick planks (about 2") bolted to heavy sawn frames, but still edge-nailed in the Japanese fashion between frames. 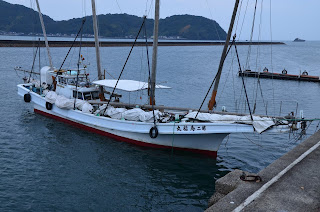 Two utasebune are used as tour boats. Spectators ride one and watch this one fishing. This boat is forty years old and the hull is fiberglass. 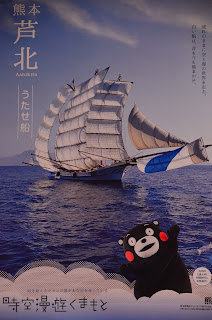 And here is what they look like, with the sails close-hauled moving sideways pulling the trawl net. This type of fishing was quite common in the Inland Sea region, also in Urayasu on Tokyo Bay, and here in Kumamoto. There is also a similar type called a hobikisen, (literally sail-pulling-boat) on Lake Kasumigaura near Narita Airport. I am in conversation with a group on the Inland Sea that wants to build a new one. Wish me luck! 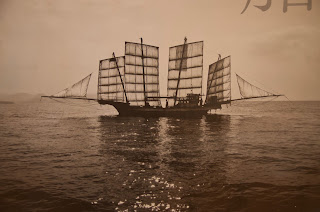