Goto Islands (Gotojima) Back To The Land

On my way south to Kyushu to see more cormorant boats I stopped to see someone I'd met in 2016 when I taught a series of boatbuilding workshops in conjunction with my exhibition of boatbuilding at the Takenaka Carpentry Tools Museum in Kobe. Miyazaki san lives on Gotojima and he described a remarkable life he and his wife have created. He also wanted to introduce me to the island's last boatbuilder. 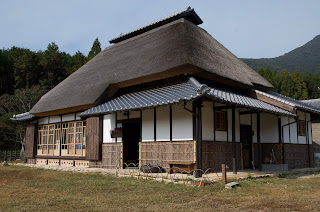 It began with his house, a 200-year old thatch roof farmhouse from Hiroshima, which Miyazaki san bought and had disassembled and brought to Goto. This, remarkable as it is, was just the beginning. 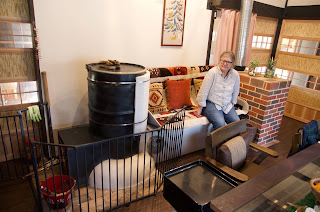 His rocket stove, which rests on a plastered base. The flue gases run through a baffle in the metal drum, then through the ceramic bench before finally reaching the brick chimney base, which acts as a heat sink, before finally exiting up the flue pipe you see here. 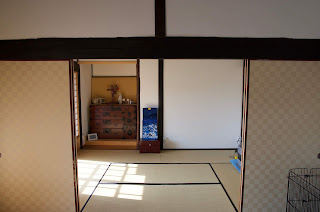 A view of the interior, a combination of traditional and modern rooms. 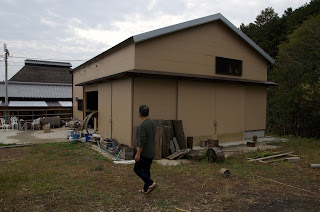 Behind the house Miyazaki san built a workshop for his son who is a cooper. 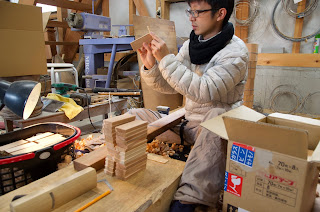 The son apprenticed with the last cooper on the island and inherited his tools. He's also part of a consortium of coopers who now travel throughout Japan build large-scale barrels principally for soy sauce companies. They also invite trainees to join them. 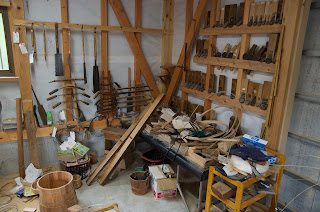 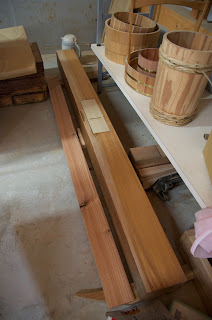 His longest joiner plane is simply a regular plane dropped upside down into a mortise in a long, straight hardwood timber. 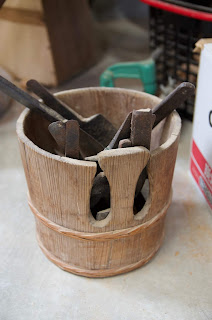 Innovative handle for a bucket. 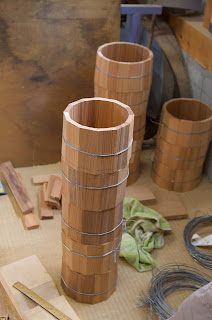 He sells his work through a website. Here are small bucket staves glued and clamped. 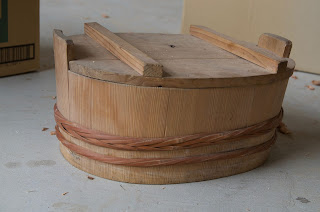 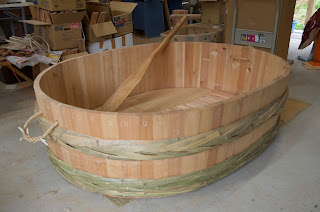 He challenged himself by building a taraibune, the first type of boat I studied in Japan. 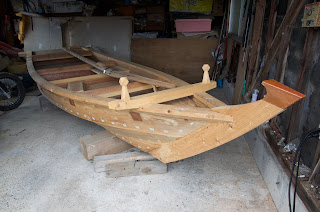 The island's boatbuilder made this 12-footer in less than two weeks. 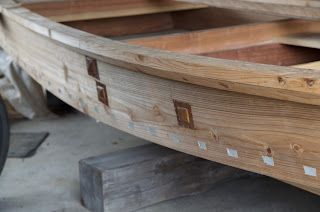 The beam ends come through the planking and are capped with copper. 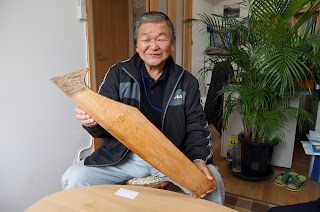 Yamaguchi san holding his father's stem pattern. He is 69 and apprenticed with his father building wooden boats, but the local industry switched to fiberglass soon after, so he spent his career building fiberglass boats. Miyazaki san has hired him to teach him how to build a boat, a project they are doing in January. Yamaguchi san told me his father lost his left arm in the Battle of Iwo Jima (less then 2% of the Japanese defenders survived) and came back home, apprenticed in a shipyard, and then started his own. Yamaguchi remembers having to hold the nail and nail set while his father swung the hammer. He said he started helping his father at age twelve. 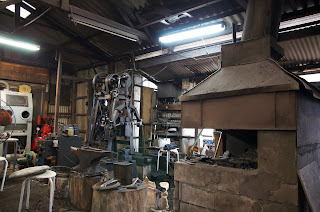 Miyazaki san's other son is a blacksmith. He apprenticed with an older craftsman too and bought his shop and tools. 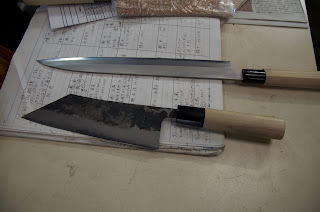 His main product are kitchen knives. 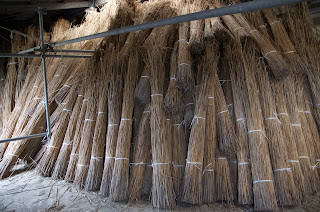 Miyazaki san showed us his supply of thatching materials. He plans on building a smaller, thatch-roofed house on his property, where he also plows with a steer, grows rice, and owns two horses. 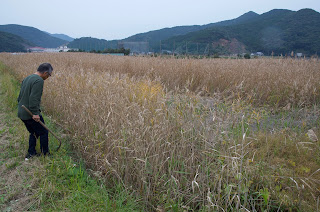 Miyazaki san showed us where he cut the thatch for his house. 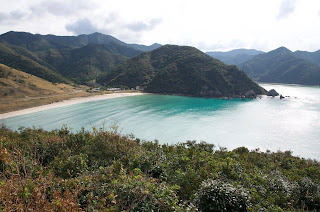 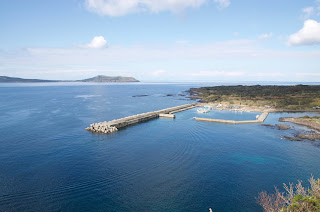 The islands are beautiful and the waters are clear and warm. 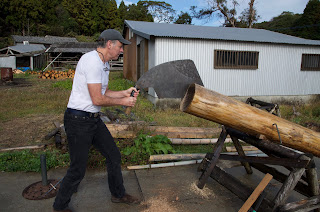 Back at the house Miyazaki san has been practicing ripping logs into planks using the maebiki, the traditional ripsaw. I helped him finish one cut. Trading off we cut one meter in about an hour. The unusual saws were a very important development in Japanese architecture, as they greatly increased the output of sawn timber, replacing two-person saws. 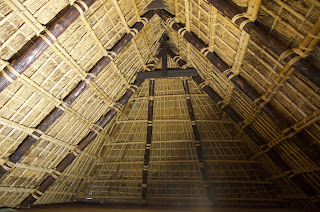 I went up into the attic of the house. In the old days families raised silkworms in these upper spaces. 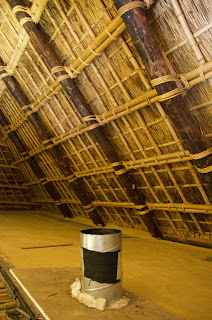 To my surprise, I found the flue pipe from the stove. The chimney does not penetrate the roof, instead the smoke fills the attic space (and sometimes the house) and slowly percolates out through the thatch. This is necessary because the smoke keeps bugs out of the thatch and also keeps all those lashings holding the bamboo to the rafters tight. 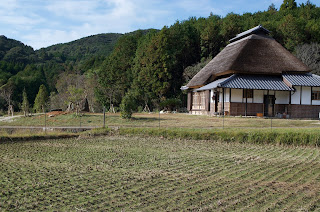 One last look at the house. These kind of homes are sitting abandoned all over rural Japan. Miyazaki san paid nothing for the house but obviously had to pay for the disassembly, trucking, and disposal of what he didn't take. Still....

Posted by Douglas Brooks at 3:09 AM