Yesterday afternoon I picked up a rental car in eastern Hiroshima and headed inland into the hills to Miyoshi, a mountain town where they use ukaibune. Fifteen years ago my wife and I traveled 10,000 km in a van around Japan meeting boatbuilders and we came here and met Mr. Mitsumori. Six years ago I learned he passed away, but three years ago a house carpenter began building boats. 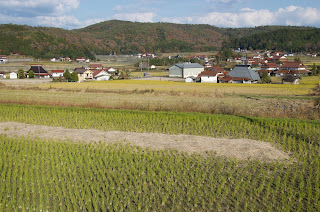 The trip via Route 375 was gorgeous, passing through farmland that could have been Vermont but for the rice and the architecture. 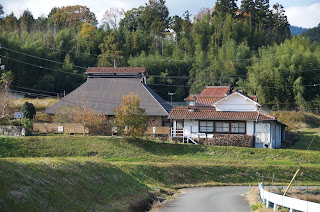 Lots of these large farm complexes. The roof on the left is tin covering an original thatched roof. These old thatched-roof farmhouses are huge. A furniture maker lives in this one and has his shop and showroom in the barn on the right. He said the house has been in his wife's family since it was built 200 years ago. 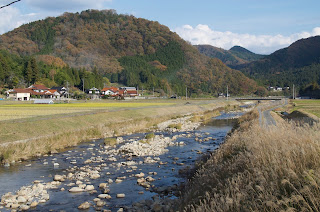 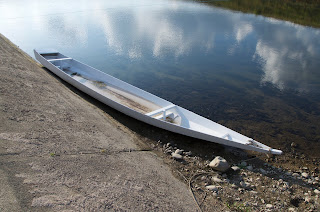 I stopped in at the tourist office when I got to Miyoshi and asked them where I might see cormorant fishing boats. They fish while tourists watch summers only, but down at the port we found one boat, but this is shorter and just a regular fishing boat, not a cormorant boat. Three rivers converge in Miyoshi and this is the Basengawa, which means "horse washing river." 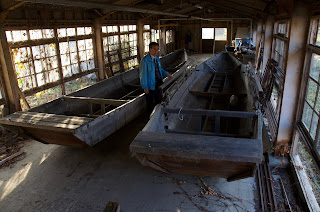 The staff person took me to the storage building for the town's fleet of boats. The large boats that carry the tourists they call yuuransen. 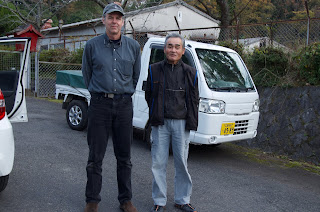 Some calls were made and Hirofumi Tenkyou, the current boatbuilder, came to meet me. He's sixty-five and says he'll keep building five more years. We had dinner together and as he talked about boatbuilding he kept using the verb "to eat." I finally realized he kept saying boatbuilding did not provide enough to feed oneself. 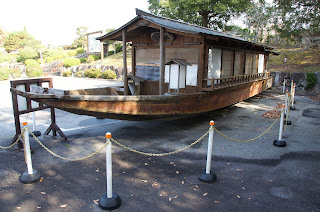 At the local museum they have an old tourist boat on display. This boat was interesting because it was set up for two people to scull oars from the stern with two bow persons using poles. 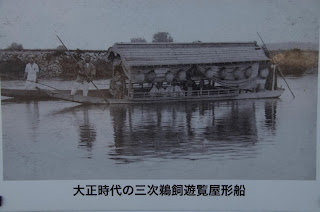 Fishing in front of tourists has been going on about one hundred years in Miyoshi. 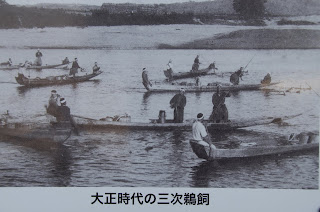 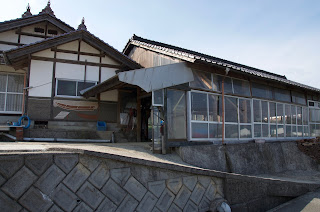 We stopped at Mitsumori's house so I could pay my respects to his widow. I remember well his glass-walled shop... 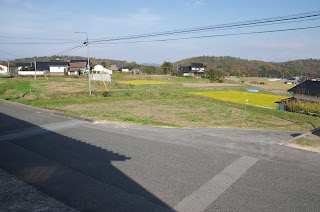 ...with its gorgeous view of the farming hamlet where he lived. 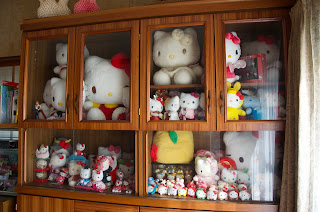 We had a great visit with Mistumori san and his wife fifteen years ago, but I was never in the house until today. It turns out Mitsumori san was an avid collector of Hello Kitty. 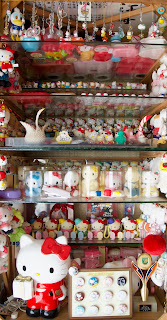 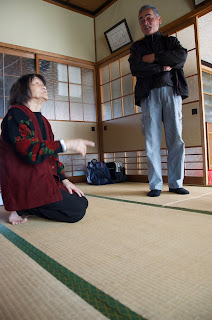 Mitsumori san's widow and Tenkyou san. I remember when we said goodbye fifteen years ago he and his wife both went back to work on the boat. I snapped a photo of her chiseling nail mortises. We talked about it today and while many boatbuilder's wives were helpers when needed, she worked more or less right alongside her husband. "A fifty-year apprenticeship," she joked. As we talked it was obvious she knew a lot about boatbuilding and the history of the boats of this region. She said she and her husband built between 1,000 and 1,500 boats. When he was young he could build a boat a week. 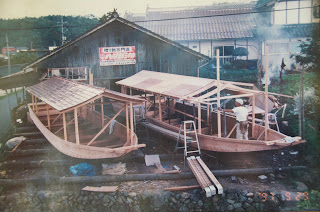 Here was a family photo showing Mitsumori building two large tourist boats outside of his shop. 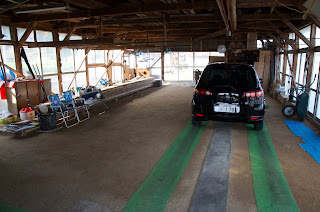 The workshop, with a clay floor. I did not remember the strip of concrete from 2003. 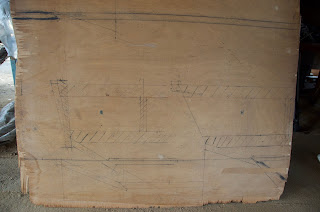 Mitsumori san worked from memory, but his widow showed me these full-size drawings of some cross-sections. 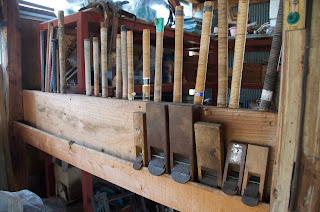 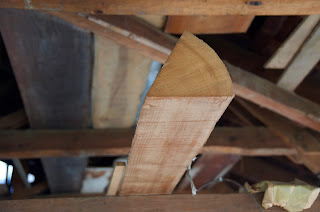 He split a piece of hinoki specifically to make the blade of a sculling oar. I met a boatbuilder in Miyazaki who told me using the material like this made the finest oars, and he charged extra for them. 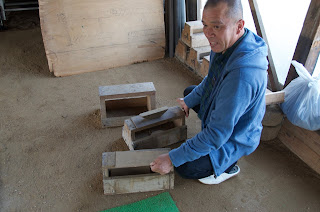 His son showed me a set of sawhorses of different heights, along with patterns for plank angles. 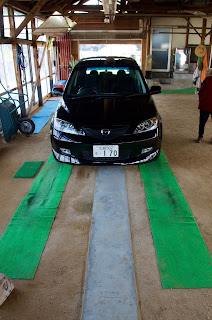 The strip of concrete was to provide a flat surface to set up the keel, which was laid on the horses of varying heights, matching the bottom's curve, then the red metal jacks in the back were braced against the ceiling to bend the bottom to shape. 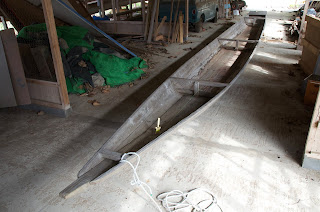 Back at the City storage facility, I stretched a string to measure the curve of the bottom. These boats are just under thirty-feet long. 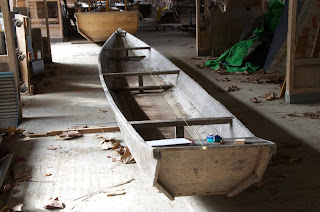 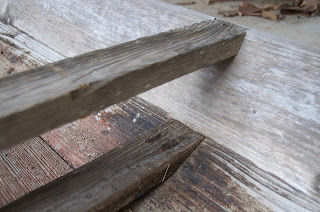 Details of the beams. 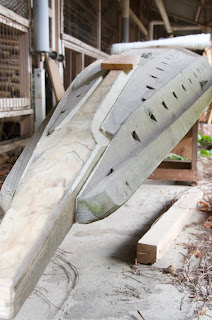 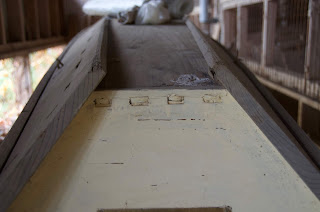 Tenkyou san explained the small differences between his boats and Mitsumori's. He leave the middle plank wide at the stern so the boats track straighter. Mitsumori planed these edges flat to the bottom. 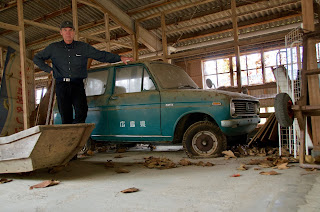 In the storage building was an old, dust-covered Mazda Porter, perfect for my next research trip. According to Wikipedia, this wagon is from the seventies and may have had a top speed of 49 mph! 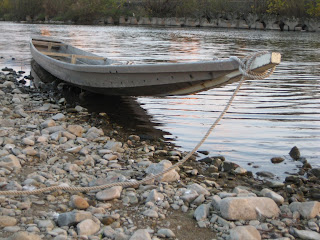 I found one boat along the river. Tenkyou san said he sells these for $4,500.

Posted by Douglas Brooks at 1:11 AM