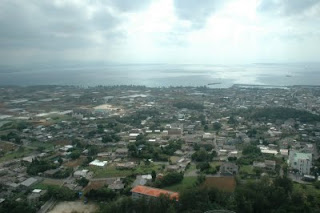 Iejima is just 22 km around, one of the many small islands that make up greater Okinawa.  My teacher's family has lived here for 120 years.  Located off the NW corner of the main island, it is a 30 minute ferry ride from Nago City. 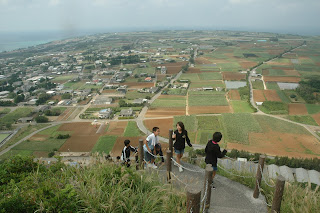 The island has one precipitous mountain in its middle, otherwise it is flat, covered with sugar cane fields that have in turn been giving way to grazing land for beef cattle.  Farmers here also grow bananas, papayas and dragon fruit, as well as tobacco. 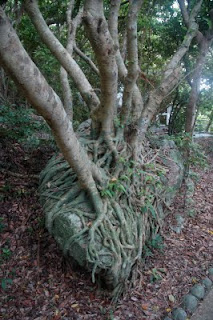 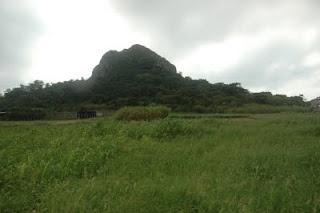 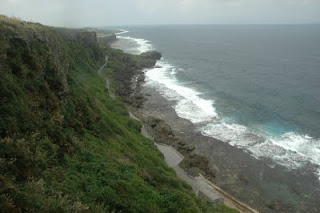 Amazingly, the island's water comes from a freshwater spring that lies under the ocean.  The road you see here is the access to the pumping station which brings the water up to the bluff.  Apparently one reason sugar cane is in decline is that it was so water-intensive. 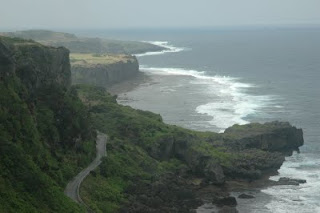 My boss' son told me he used to spearfish along this coast when he was young. 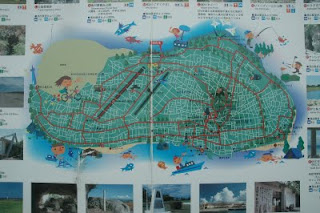 A map of the island.  Five thousand people live here now, along with a detachment of US military personnel.  The blank space on the map above is that area under the control of the US military.  Three thousand five hundred citizens and Japanese soldiers died here in the Battle of Okinawa (my teacher lost two close family members during the war) and the most famous American to die here was the war correspondent Ernie Pyle.  There is a memorial marking the spot where he died, with a monument marked very simply, but movingly: We Lost A Buddy: Ernie Pyle.  The older of the two runways (now weed-grown) has some claim to fame: it was here that three Japanese bombers landed delivering the official letter of surrender from the Emperor.

Posted by Douglas Brooks at 3:01 AM