My teacher is Mr. Ryujin Shimojo, who took up boat building in his early twenties after working as a fisherman like his father.  He was 16 during the Battle of Okinawa and he told me that he and all the other schoolchildren were made to build fortifications.  As for fishing, in those days the only boats were unpowered sabani, both big and small, and Shimojo describes this work as cold and demanding.  He told me how he would fish alone, holding the sheet in one hand, the rudder in the other with the trolling line held in his teeth. 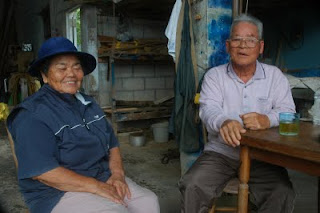 Here is a photo of him and his wife.  In his forties he was in a severe car accident that permanently damaged the left side of his body and he lost one eye.  He had four children to take care of and he continued to work, though one of his sons and his wife began to help him in the shop. 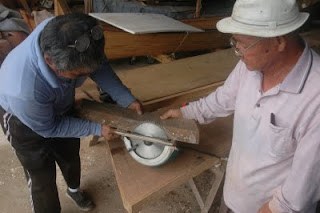 Here is his son Tomio san helping him.  Tomio is working with us part-time on the project, and Shimojo san's wife comes in daily to pitch in. 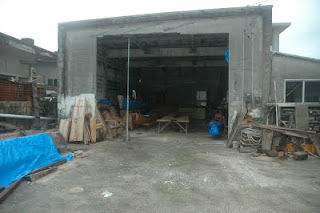 This is the shop.  Today all the buildings on the island are concrete or cinder block.  Wood may have been nice, but rebuilding after the typhoons wasn't.  Shimojo san did a variety of work here, mostly boat building but he also set up a machine shop for shaft and propellor work once small engines became available.  He began building powered sabani and then built what he called "wasen." 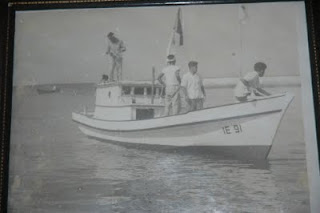 "Wasen" means "traditional Japanese boat" but the distinction for Shimojo san is that a sabani is something else unique.  It is a reflection of the idea that here in Okinawa there is a culture distinct from the rest of Japan.  This photo shows his very first boat built in the Japanese style.  He built more of these and then switched to fiberglass.  In the harbor I found some of the old style glass boats, perhaps ones he built. 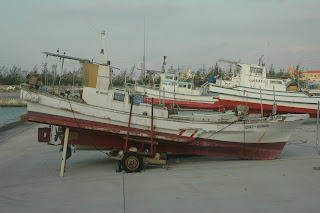 He said his biggest boat was 35 feet long.  He considers sabani to be the pinnacle of boat building and he had some interesting things to say about the evolution of boats that he built.  Of wasen he said, "It's easy, you just set frames up on the bottom bend the planks around and that's it."  Of fiberglass, "You just spread the stuff around and you have a boat."

Working with him has been a revelation in tenacity and endurance.  It is enormously humbling to be working alongside a 79-year old man and see his severe physical limits, and then think that he has carried on like this for over thirty years.  He has made many adjustments and for the most part uses all the tools with one hand.  He is just five feet tall but he can swing around a heavy power tool easily with his right arm. 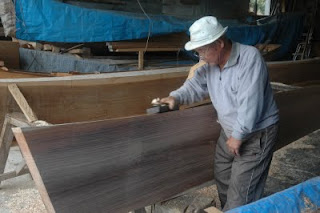 I do as much as I can to anticipate what he needs but if one of these planks needs lifting and I am not there he lifts it.  He refers often to his accident, and his bad arm and leg, but every time he completes the story with a smile and a laugh.

He marks his work with the first and last kanji (Chinese characters) of his name: SHIMO JIN. 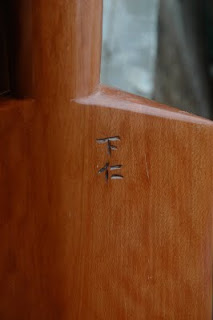 Today I am off to the races, literally.  I take the 8 am ferry back to the main island and then down to Itoman where the last sabani races of the season are taking place.  There are only three sailing races a year and when Shimojo san heard I was invited to see them he gave me the day off.  He said that in my absence he might just spend the day sitting in the shop doing nothing.
Posted by Douglas Brooks at 2:23 PM