I don't think I've ever put two posts up in one day, so if you haven't looked at the blog in awhile be sure to keep reading below for my previous posting from this afternoon.

Today our volunteer showed me a book about the wartime history of the island and some of the photographs illustrated things I had mentioned in earlier posts about the War and the tankobune, or "tank boats" that local fishermen in Okinawa made from US Air Force scrap. 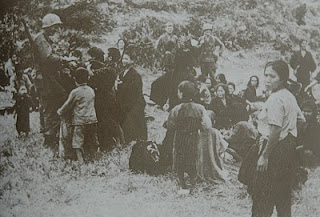 The US military evacuated the island's inhabitants following the battle and did not let them return to Iejima until about three years after the end of the War.

This photo shows the Japanese military runways, which were the prize that the Americans were after. 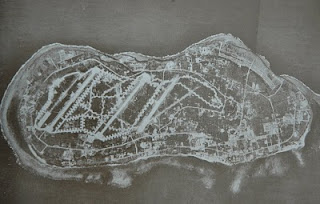 However, the US quickly enlarged the operation into a major airbase used for the bombing of mainland Japan.  Having lived here looking at this its almost inconceivable how great a part of the island was transformed.

Under the wing of these aircraft are aluminum drop tanks: extra fuel to extend the fighter's range which could be dropped when they were empty or got into a dogfight.  It was these tanks that local fishermen converted to fishing boats.  You can see Mt. Gusuku in the background. 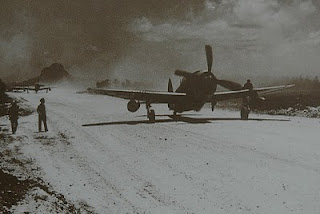 A photo of a US aircraft on the runway, with drop tanks, the local mountain in the background.

The link to my earlier posting about these unique boats is at this address: 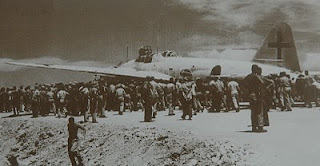 The other bit of history is that the Emperor's official letter of surrender was flown to Iejima by a flight of Japanese bombers.  Here is a photo showing American soldiers crowded around one of the arriving planes.  The Japanese were ordered to paint green crosses on the planes to mark them.  From Iejima the surrender was flown by American aircraft to the US General Staff. 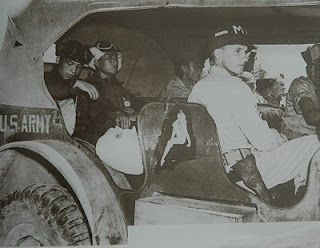 A photo showing two of the Japanese pilots being led away by MP's.  The day after the delivery the Japanese planes were allowed to fly back to Tokyo.  Note the pornographic art painted on the side of the Jeep. 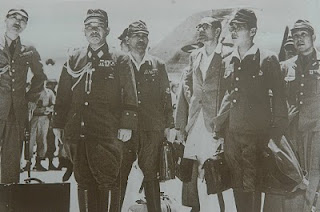 The grim-faced delegation that delivered the letter of surrender.  Generals, I suppose, and perhaps a diplomat in civilian clothes.

Posted by Douglas Brooks at 3:59 AM