Surprising how many people have emailed me asking what I am doing with my time on the island now that the boat is done.  Well, given how many days I've worked really the only sightseeing I did was on my after-work runs, and I was able to reach just about all the island's corners that way, but I've now had the time to see just about everything there is to see. 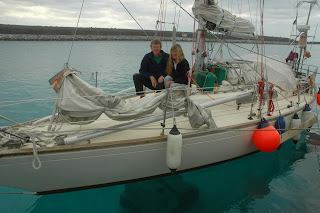 The last two days have been interesting.  I met a couple from Sweden walking down my street in foul weather gear and rubber boots.  They had just tied up their 36-foot sailboat in the harbor.  They are currently circling the Pacific Rim on their way around the world.  When I told them about the sabani they were eager to see it, so yesterday morning I took them to the shop.  Moments later Shimojo san's daughter, the island's only kindergarden teacher, showed up with a field trip of all the island's kindergardeners.  We all went inside and the school principal played the Okinawan shamisen, called the sanshin, for us. 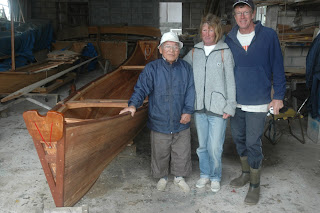 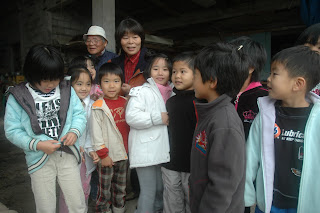 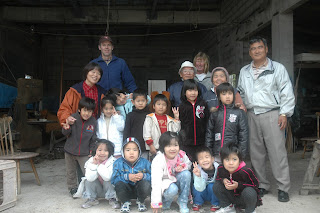 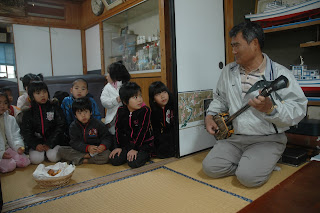 Later that afternoon I ran into the sergeant in charge of the local US Marine detachment on the island.  When he heard what I was doing here he asked if he could bring his men by, so I went back over this morning to show them the boat.  They left one soldier behind to guard the fort, literally.  At one time a US Air Force detachment on Okinawa had a sabani and raced it, but that group was disbanded and their boat was sold to a Japanese team. 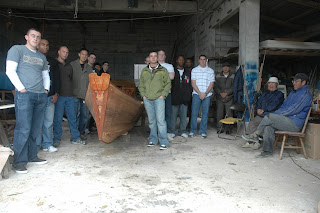 We also made the paper today, the Ryukyu Shimpo: 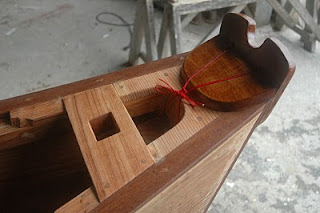 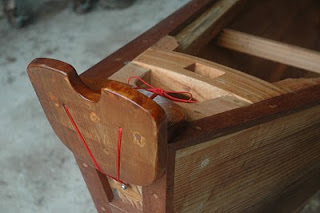 And the varnish had dried on our mast rest, which Shimojo mounted on the bow.  It is held in place with a cord. 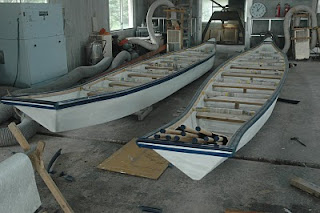 After saying goodbye to the Swedes in the harbor I discovered some fiberglass "sabani" under construction!  The man making them told me that they were for kids to paddle during festivals. 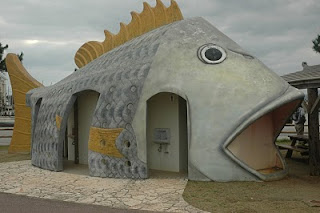 The harbor has some interesting kitsch, like its public restroom... 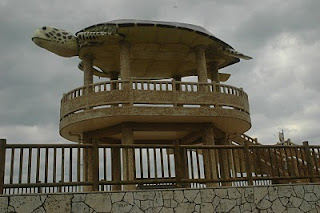 ...and the viewing platform. 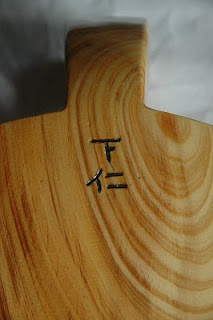 The bailer is also done, Shimojo san having signed and varnished it. 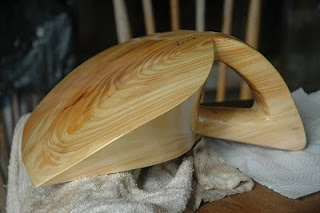 I will never be able to cut a Clorox bottle in half again for a bailer and not feel completely ashamed.

Several comments and questions were left with my last posting, and to answer one, unfortunately I will not get to sail this boat.  It is destined to be shipped to the Museum of Maritime Science in Tokyo to become part of their permanent collection.  And Shimojo san has said he feels that any kind of ceremony should be conducted just before the boat leaves, and shipping hasn't been scheduled yet, so I may miss out on this too.  Having helped build the boat I certainly wish someone could sail it, and perhaps the museum in Tokyo will try.  There are some people in Japan trying to convince the museum to actually ship this sabani to boat shows around the world for display, another idea I heartily endorse.  I will keep this blog active as I write my book and complete drawings, so hopefully I can have good news for readers about how this sabani is used, and maybe even let you know where you might see it outside Japan.

Tomorrow the man who is making our sail is coming to the island.  I learned that he is soaking the cotton in real shark liver oil as a preservative.  I also just recently heard someone claim that in the old days sails were soaked in pigs blood as a preservative, but I am not sure about that.  The traditional sails here were a tanbark kind of color, and I guess it was usually shark liver oil.  I will try to confirm all this tomorrow.

I also learned from Shimojo san yesterday that the small mast that was sometimes stepped in the bow of the boat was about 2/3rds the height of the mainmast, which is 2/3rds the length of the boat.  He said that the sail shape of the jib was just a reduced version of the mainsail, and he said this auxiliary sail was only flown in light winds.  So it clearly wasn't really like a jib; that is, slotting the main to increase its efficiency.

As for the tempura oil, I estimate about five gallons have been used on the boat inside and out.  The cedar just keeps soaking it up, and the pine, despite how hard a wood it is, is an amazing sponge.  At any time the boat could be toweled completely dry to the touch, and there is no smell.  Remember though, in Japan small boats even today are pulled out of the water at the end of each day.  I don't think that this would be a finish that could be left immersed for long periods.
Posted by Douglas Brooks at 8:56 PM