Back to work now after our holiday.  I just received this link to a very pleasant video showing a small sabani out sailing.  Please give it a look: http://www.youtube.com/watch?v=Qmb-3FQtgoI

We had six days off for New Years, one of the biggest holidays in Japan.  After over forty-one days of work out of the last forty-three I was ready.  I stayed here on the island except for one day trip to the big aquarium on the main island and the museum of Polynesian boats next to it. 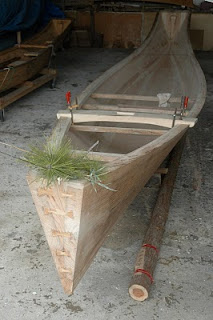 Our boat got decorated with a sprig of cedar and bamboo.  Also, Shimojo san believed that it was important at New Years to give the shop a complete cleaning and while I swept every corner he organized all his tools.

While here I finished measuring two old sabani that are held in a private museum and the town of Iejima.  I was also taken to see a large, powered sabani owned by a friend of the owner of the guest house where I am staying. 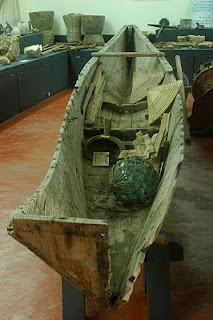 This is an interesting boat, entirely plank-built with no hollowed parts.  Its very small but the fastenings are a combination of huundu and edge nails.  Luckily you only need half a boat intact to do a lines-taking and the port side was complete.  It had exactly half a transom! 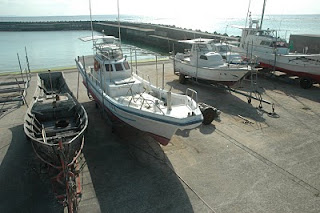 In a small port at the west end of the island I was shown this one old sabani (about forty years old) that rests amidst a variety of fiberglass boats.  It's now a pleasure boat.  The man who showed it to me claimed that in the old days fishermen would paint their boats with pigs blood.  That may have been more symbolic than useful, as my teacher and others have told me that in the old days every family raised a pig for slaughter specifically at New Years.  Perhaps fishermen came up with this symbolic use for the blood. 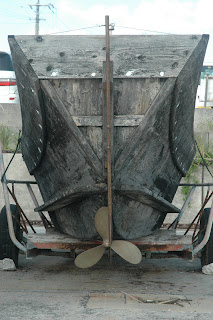 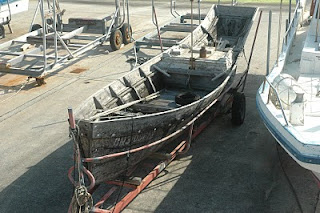 Compared to what I've been building this boat seemed like a monster.  It has an engine room amidships and is much, much beamier than our boat, which represents a purely sailing/paddling type.  Some of the features that were added to sabani after engines became available were grown frames and the added plank to increase freeboard. 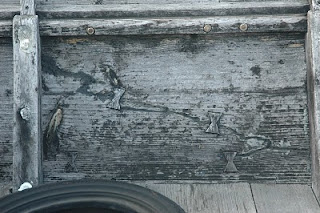 One little detail I noticed were these huundu and some kind of seam compound repairing a crack in the planking. 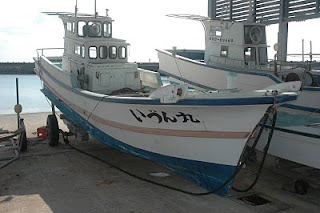 And one of my teacher's fiberglass boats was in the harbor. 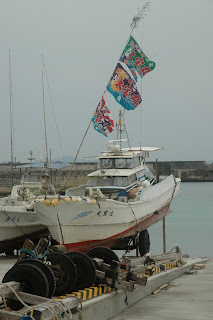 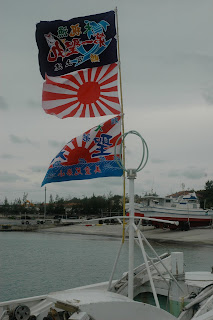 For three days about half the fishing fleet was decorated with special flags and sprigs of cedar and/or bamboo.  The colorful flags are asking for safety and good catches in the New Year.  I've heard comments that flying the Japanese battle flag (the one with the rays) is considered controversial, though one friend believes that the association is with the Japanese Navy, and therefore significant for fishermen.  If any readers have ideas about this please leave a comment.

Posted by Douglas Brooks at 1:38 AM