In this part of Japan the props we use to hold parts of the boat in place are called tsuzu.  Elsewhere in Japan my teachers also called them tsukai bo or tsuppari.  Whatever you call them, they are absolutely integral to traditional boatbuilding in Japan.  The shop itself is also a critical tool.  All the shops I have worked in had heavy overhead beams, all to bear the pressure of the myriad props used in building.

Our structure is built of 90mm x 90mm beams (almost exactly the same as an American 4 x 4), entirely bolted together.  However, when we started to prop the kajiki (garboard plank) in place, we not only moved the boat but we deformed the top beams and at one point lifted the entire structure!  So we have tried to prop against the bottom beams rather than the floor, and I clamped two additional beams overhead.  Nevertheless the whole arrangement is dicey, but we’ll make it, and in the future we will build this a bit differently.

At the stern I used a pipe clamp, which has been very handy.  Ordinarily Japanese boatbuilders use few, if any, clamps in this situation.  I have seen them use rope and a Spanish windlass (twisting the rope tight with a wooden bar).  I have attached one photo from my second apprenticeship in 2001 showing the props we used to hang the kajiki on the bekabune, a boat I built at the Urayasu Museum with Mr. Nobuji Udagawa.  You can even see props pushing against props, something we too are doing here in Takamatsu. 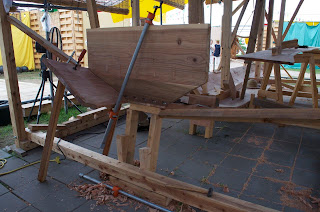 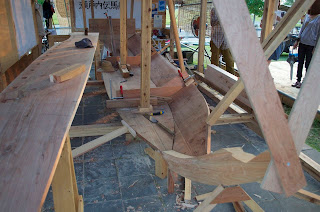 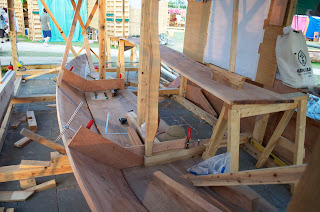 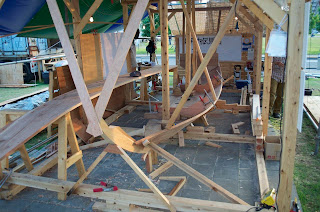 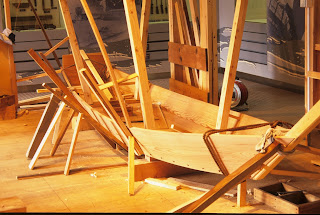 Posted by Douglas Brooks at 8:26 PM