I am on a roll, having put up three blog posts in 12 hours....  Yesterday and today were my days off so while I went out of town I found myself with some time (and internet) so I could catch up a bit with the blog.

A friend in Kameoka has been in touch with an NPO in Toyama Prefecture, Himi City, and he arranged for me to come over here and see their Tenmasen Project.  They have been working with a local boatbuilder (one of the last in the region) and he has built them two small tenmasen, replicas of a type that was once common here.  Himi is famous for its fresh fish and there were all kinds of fisheries at one time.  I noticed in the short time I've been here the number of sport fishing shops around town.

Catherine and I drove through Himi in 2003, and I recognized some of the sights as the final tiny one-car train made its way up the coast.  Himi is where the train line actually ends, and further along is the Noto Peninsula, an incredibly lovely rural region of Japan.  In 2003 we made a slow tour around the coastline of the entire peninsula. 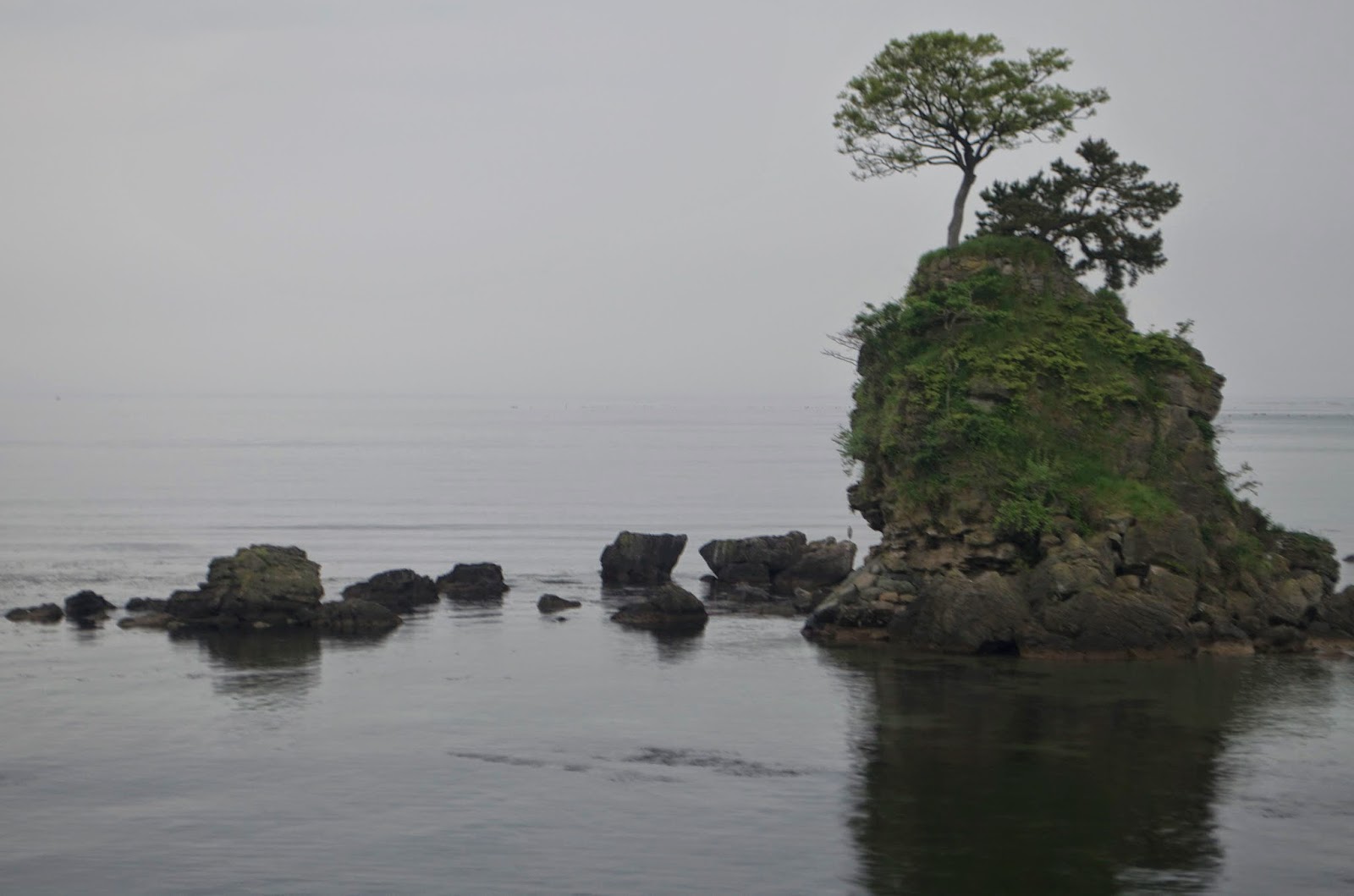 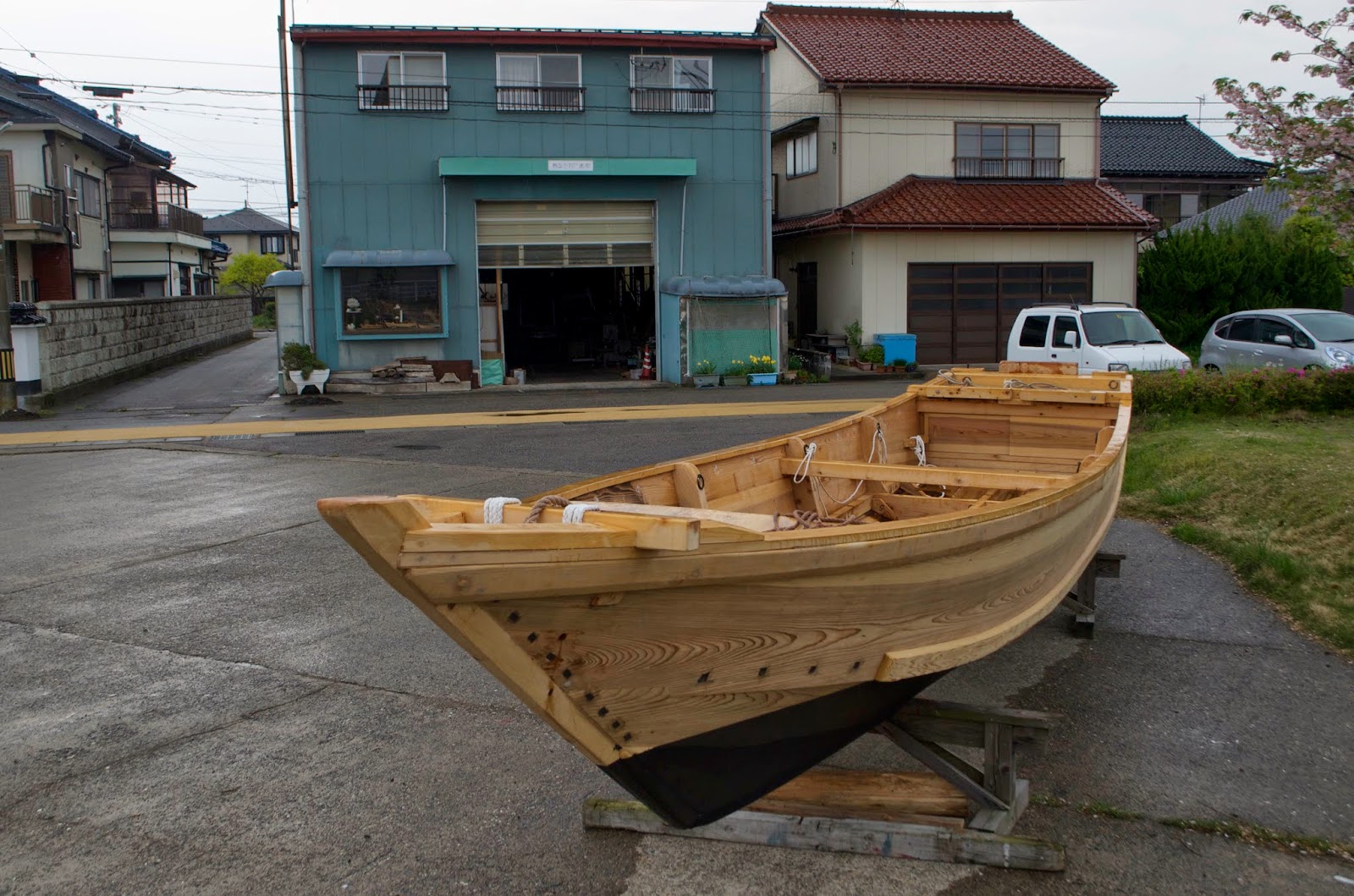 In the background is Banso san's boatshop and a boat he just finished for an organization in Osaka.  Bansho san is a third generation boatbuilder and while he did a traditional apprenticeship with his father the company switched to fiberglass boats by the time he was thirty.  But he's completely capable of building traditional wooden boats.  I know a handful of boatbuilders like this, whose careers have gone back to wood to satisfy the needs of tourist companies. 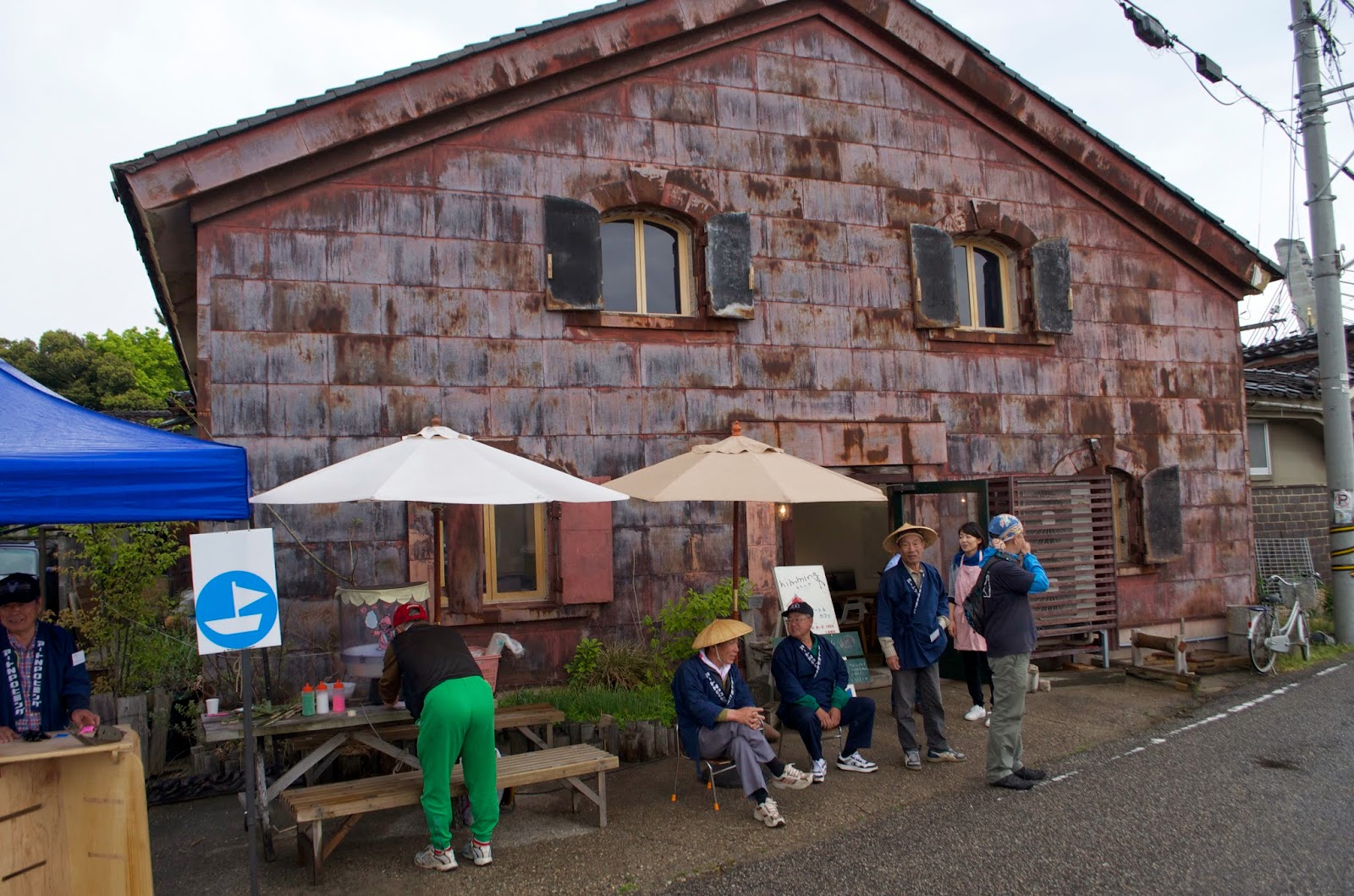 The Himming NPO is located in the old warehouse of a soy sauce factory. 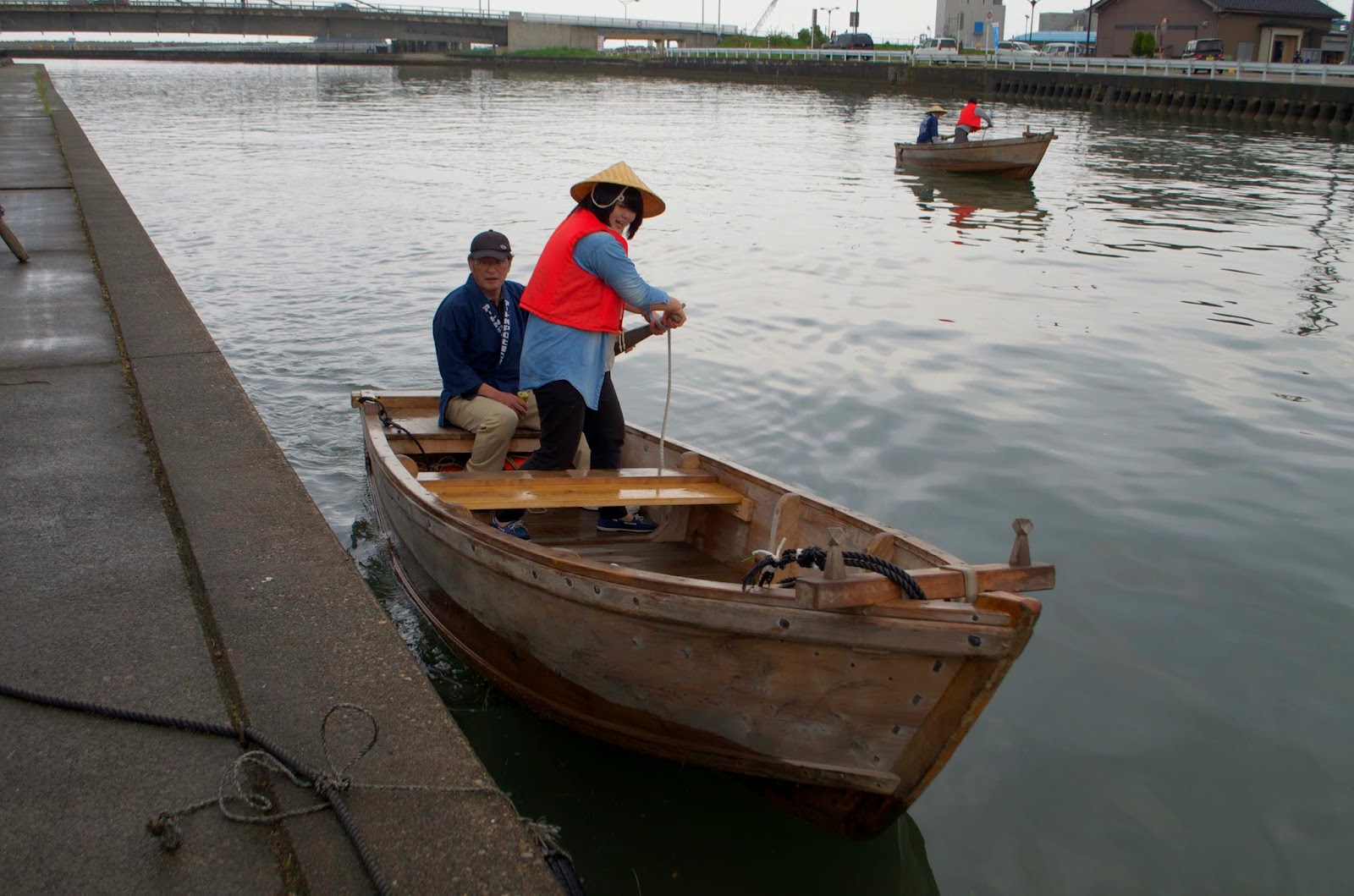 The two boats took people out all day teaching them how to scull. 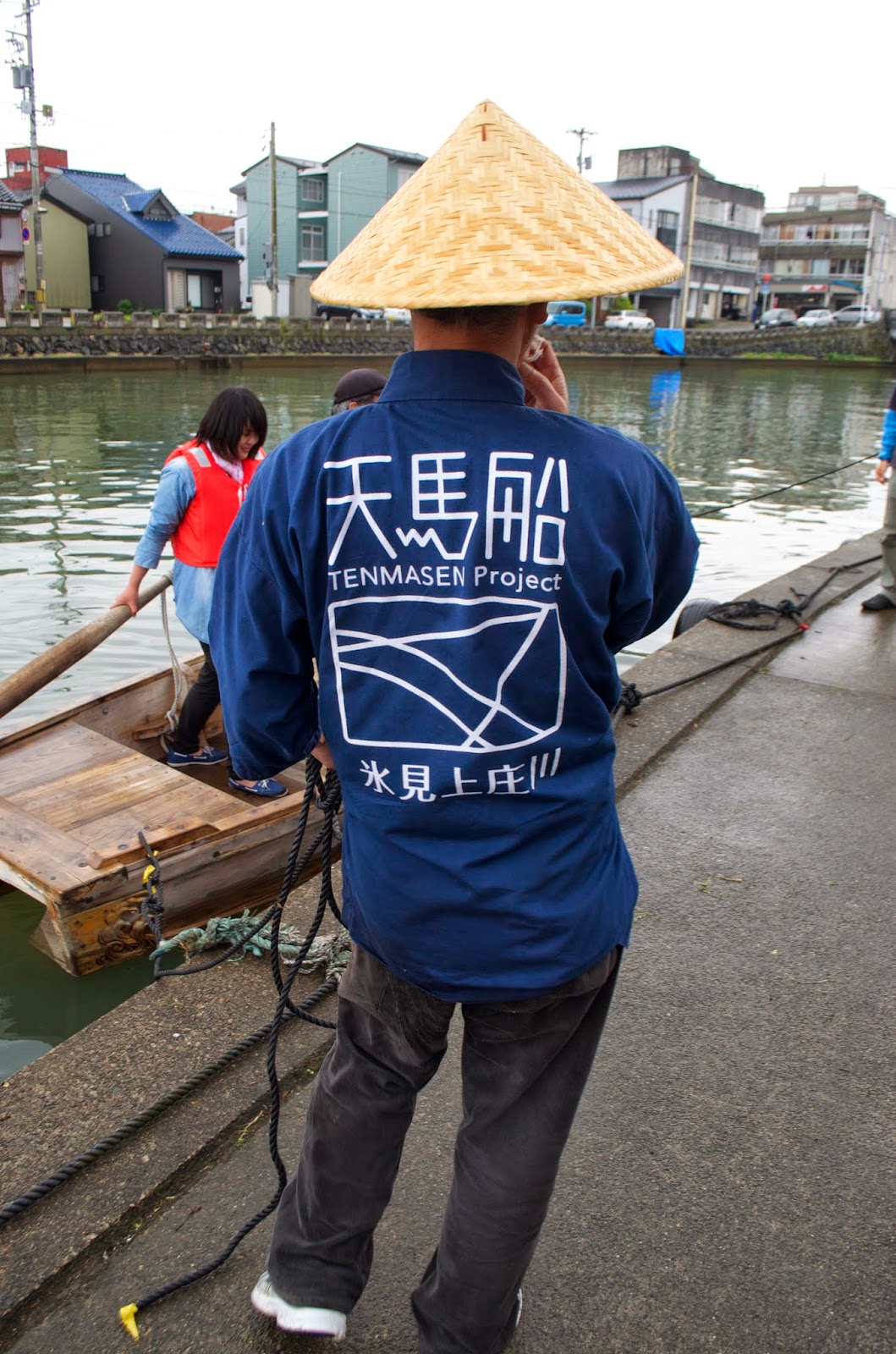 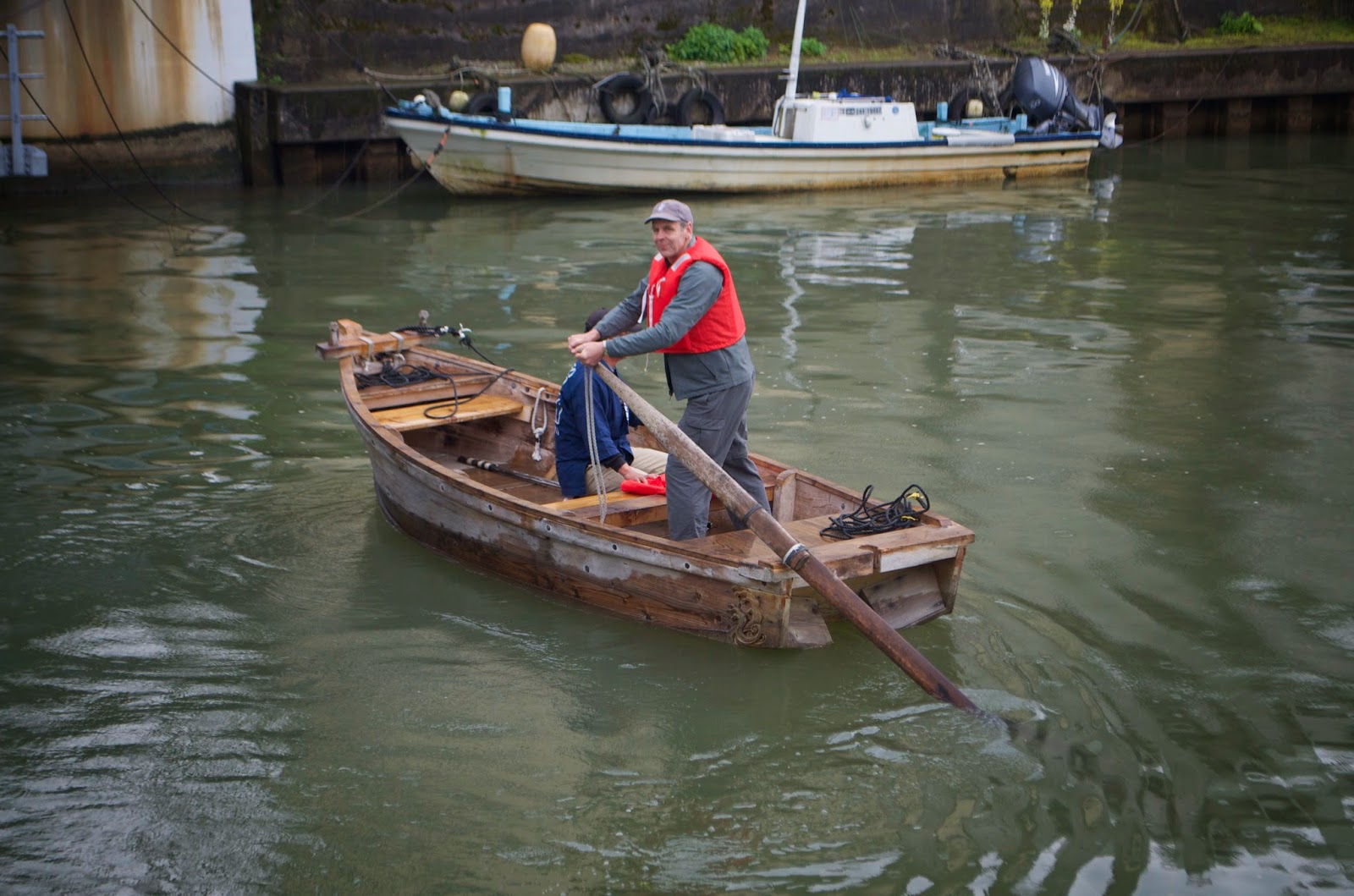 I took a turn at sculling, which surprised everyone.  There are not many people in Japan who can do this but I have lots of practice given my association with Wasen Tomo No Kai (Friends of Traditional Japanese Boats) in Tokyo.  I built them a boat with my teacher in 2003 and I have rowed many miles around Tokyo with them. 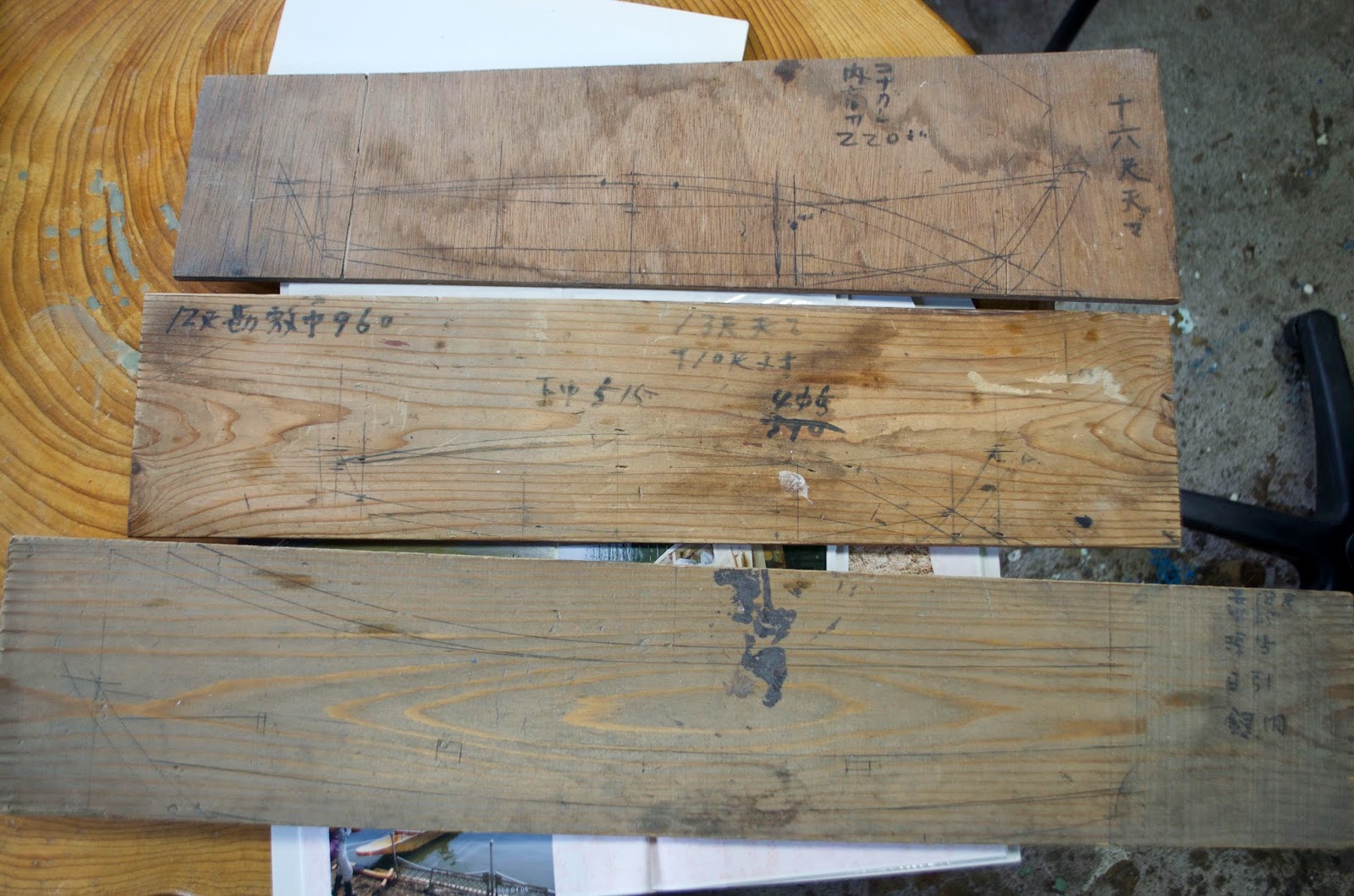 Bansho san showed me his plank drawings, his father's and even his grandfather's. 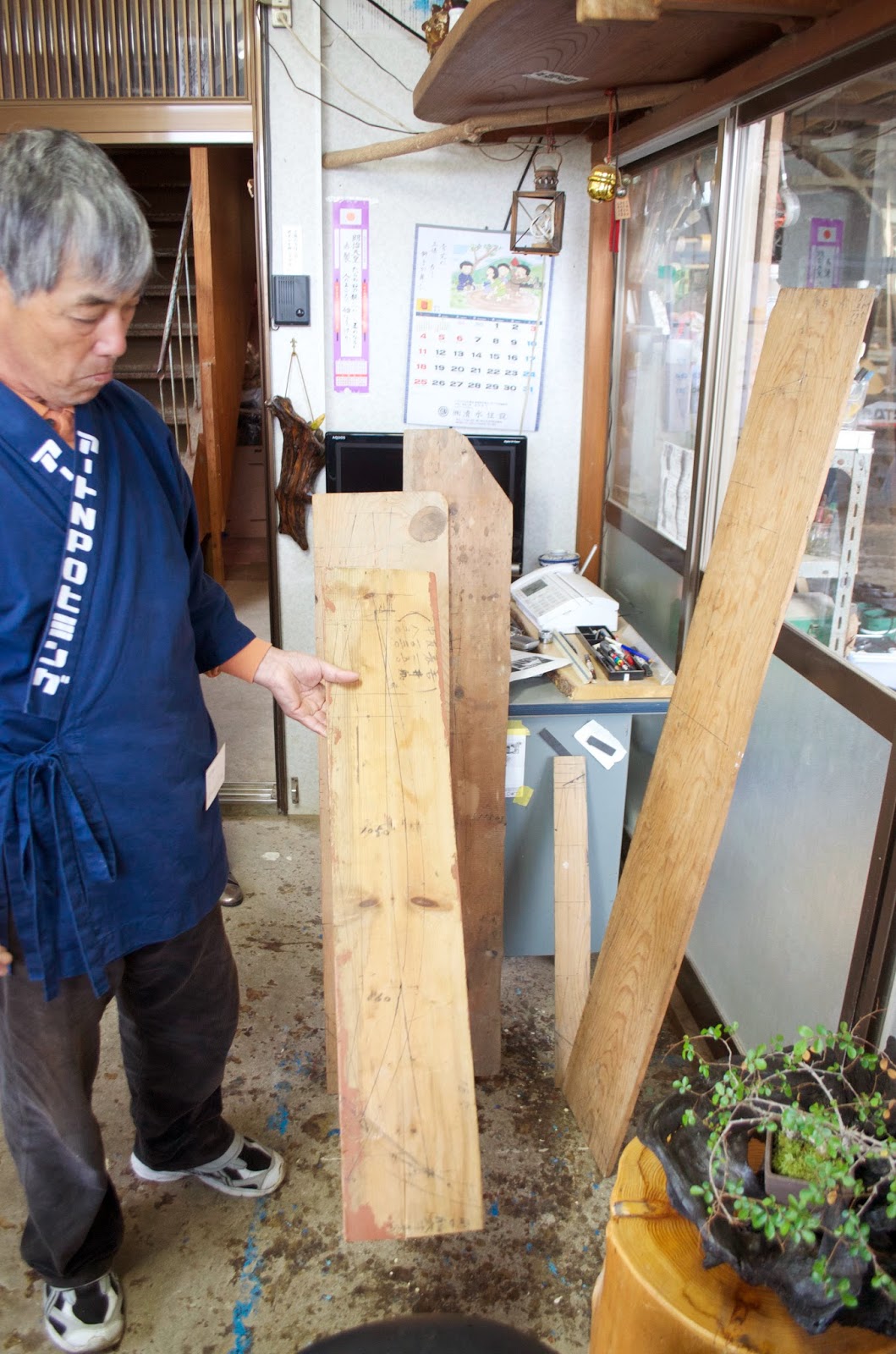 These drawings are always on a plank of wood and to 1/10th scale, so you can see the family produced some large boats (for squid and sardine fishing). 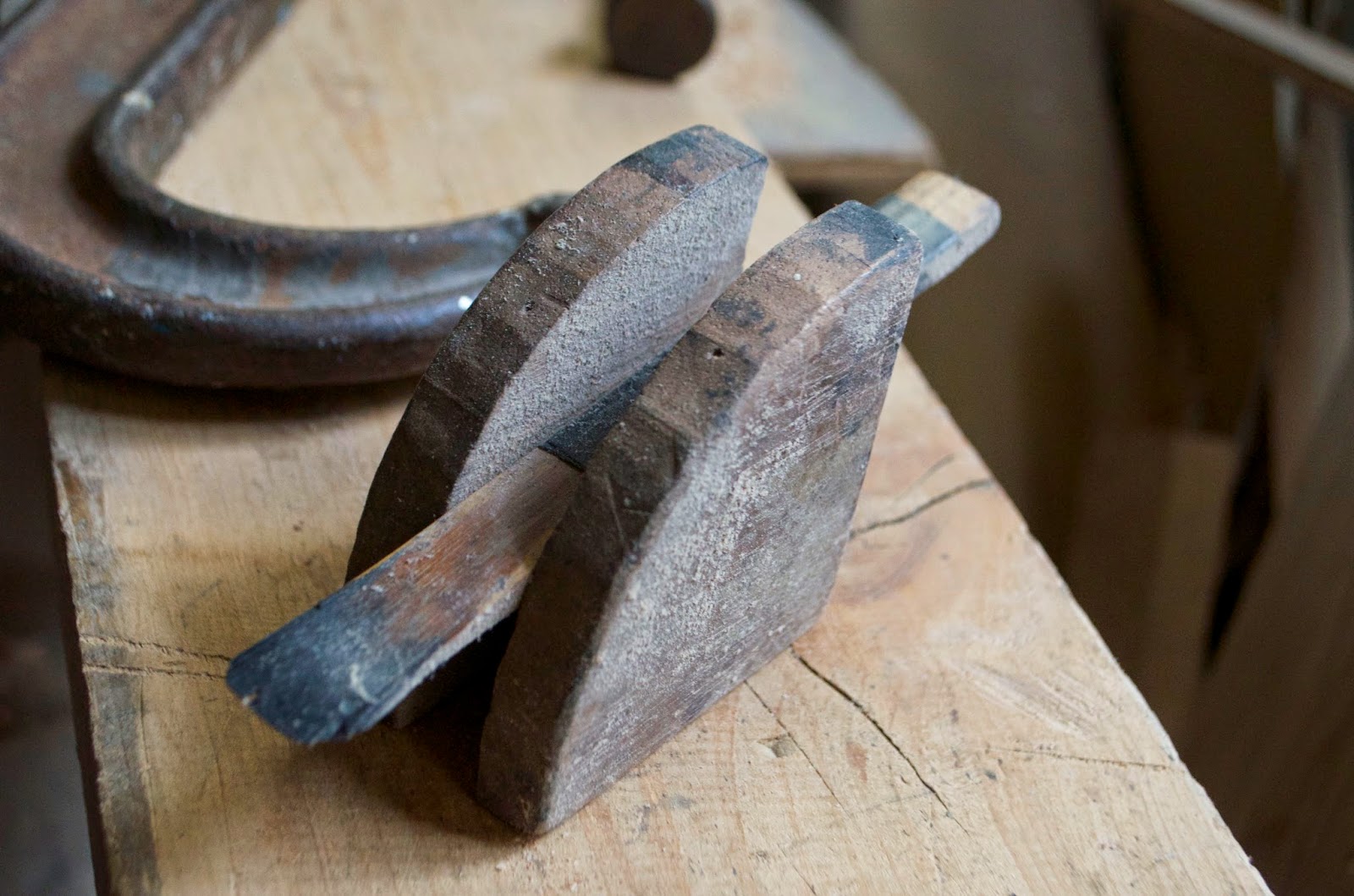 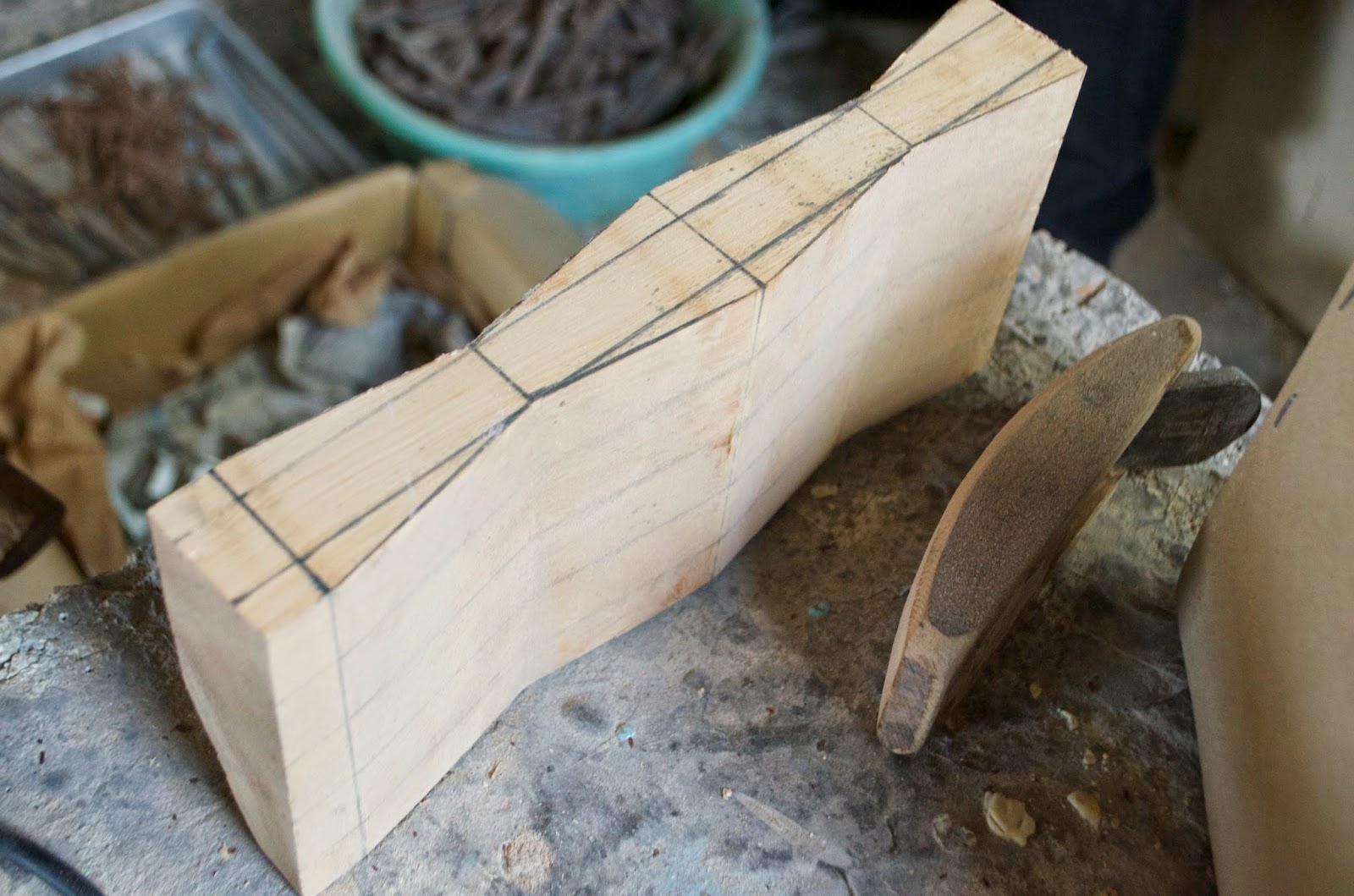 He also sometimes uses a wooden dovetail fastening, here laid out to be cut in multiples.  I studied this technique in Okinawa but it is found in some places in Japan.  He called these chikiri.  A boatbuilder a few hours away called these chigiri, which he said was a verb meaning "to put together" and also a slang for sex.  Bansho san insisted chikiri isn't a verb and indeed my dictionary says it mean a weight used for measuring.  My guess is the shapes are similar, and in Okinawa some believe the term for these fastenings - huundu - comes from the fudou, a weight which they also resemble.  But this is just one of many examples of how local pronunciations and dialects make assembling any single glossary of Japanese boatbuilding impossible. 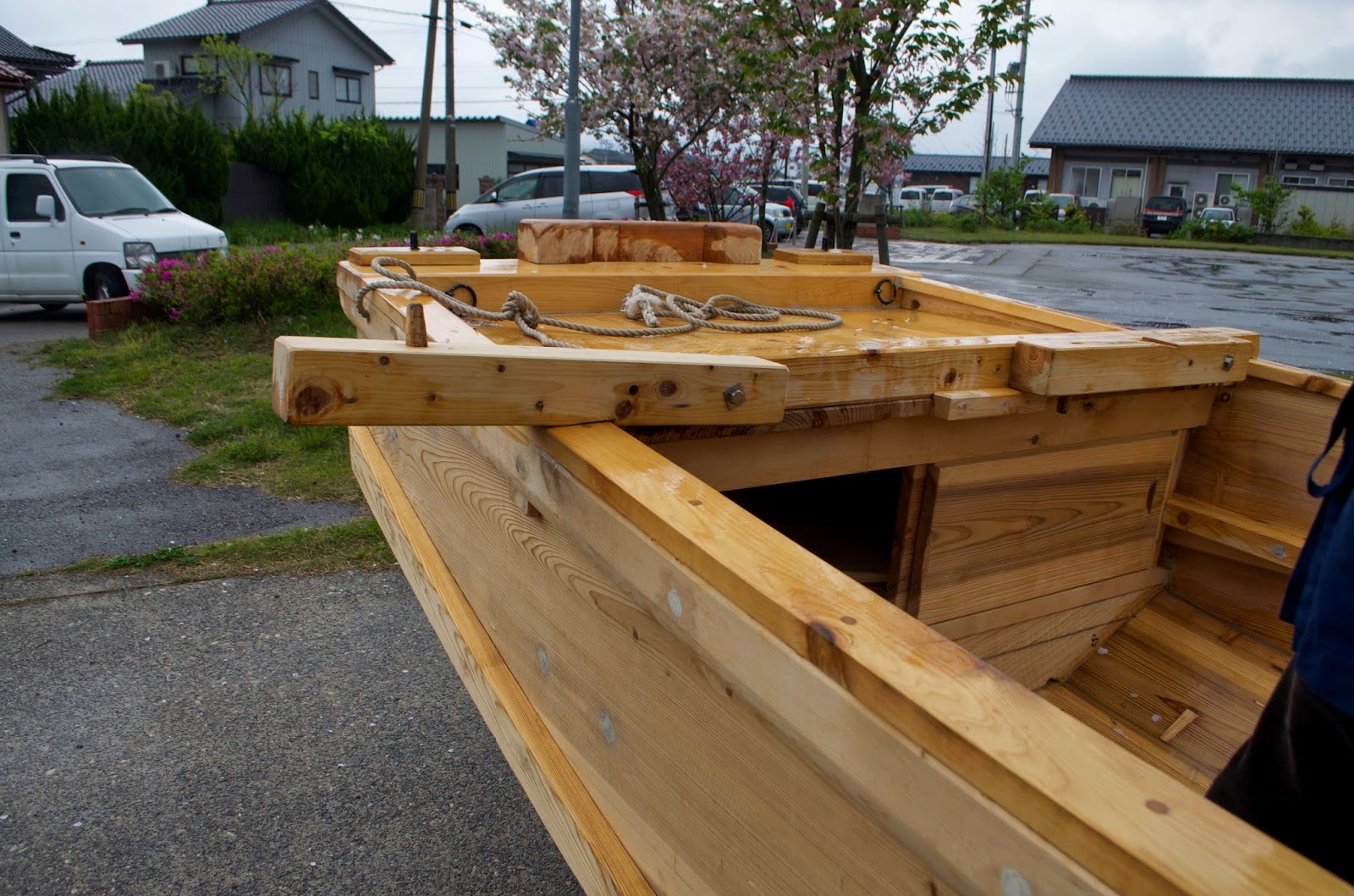 His new boat has a neat beam that flops outboard so you can use a sculling oar along the side. 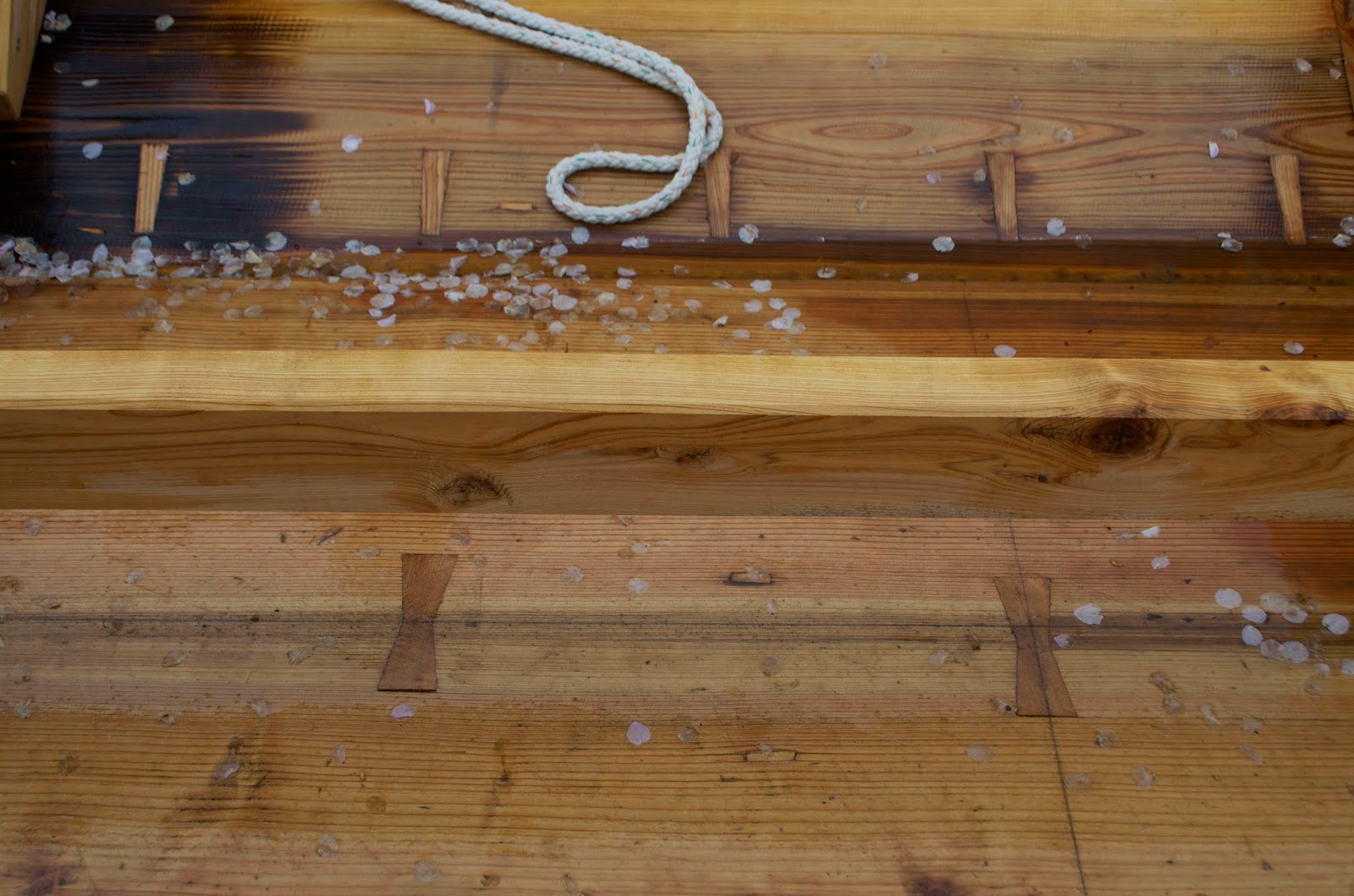 This is looking at the bottom plank in the foreground and the garboard.  The chikiri are visible holding together the thick bottom planking and the nail plugs for the garboard fastenings can be seen behind.  Also note the charred planking, a result of the bending process using an open fire. 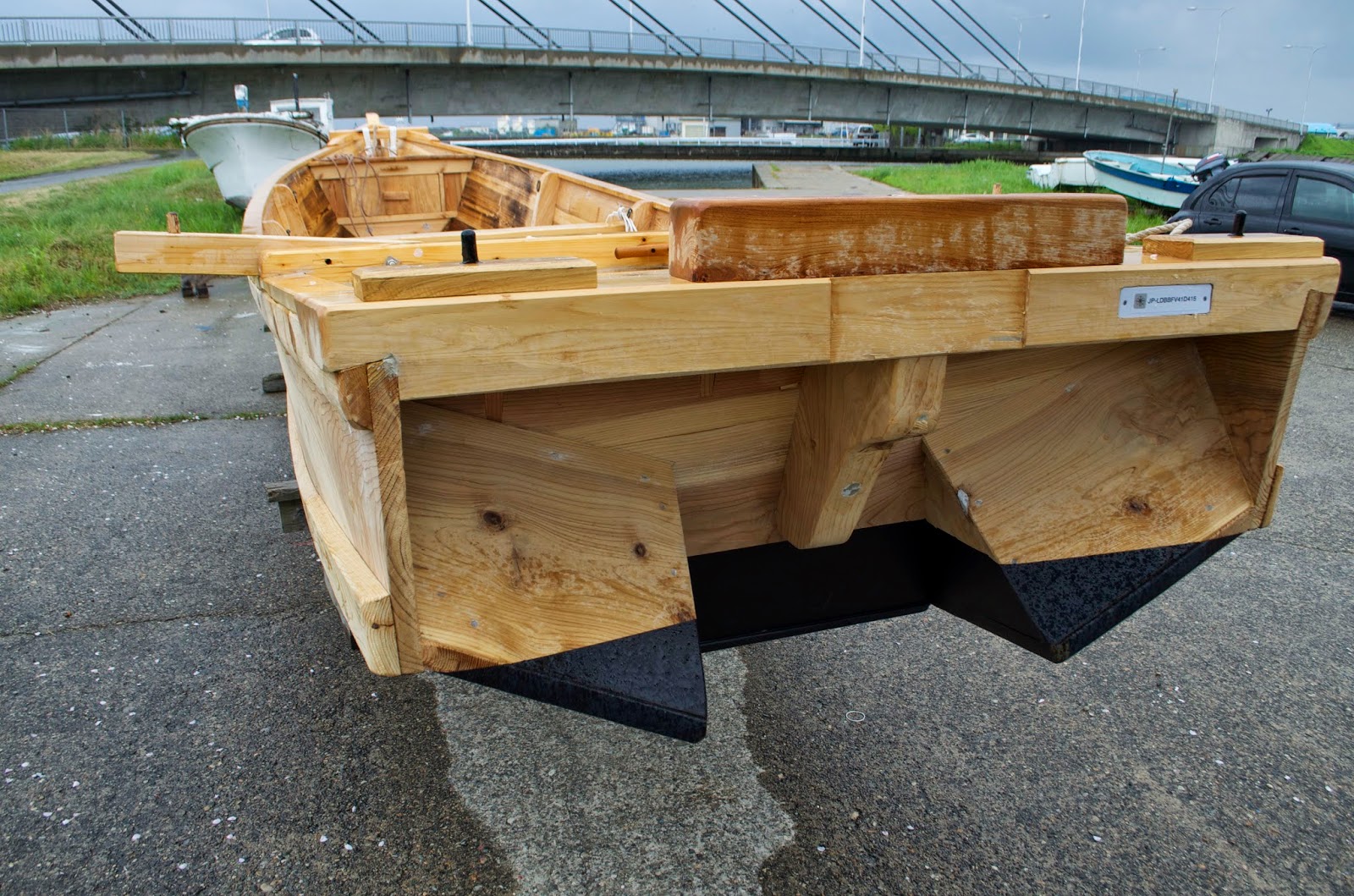 In this region the overhanging planking at the stern is boxed in with panels that run back to the transom.  Bansho san said these were to reinforce the plank ends.

Note the narrow piece of wood set into fill between the forward edge of the plank and the stem.  Bansho san called this the mizu kuru which mean "water cut" and of course in the West we talk about a cutwater. 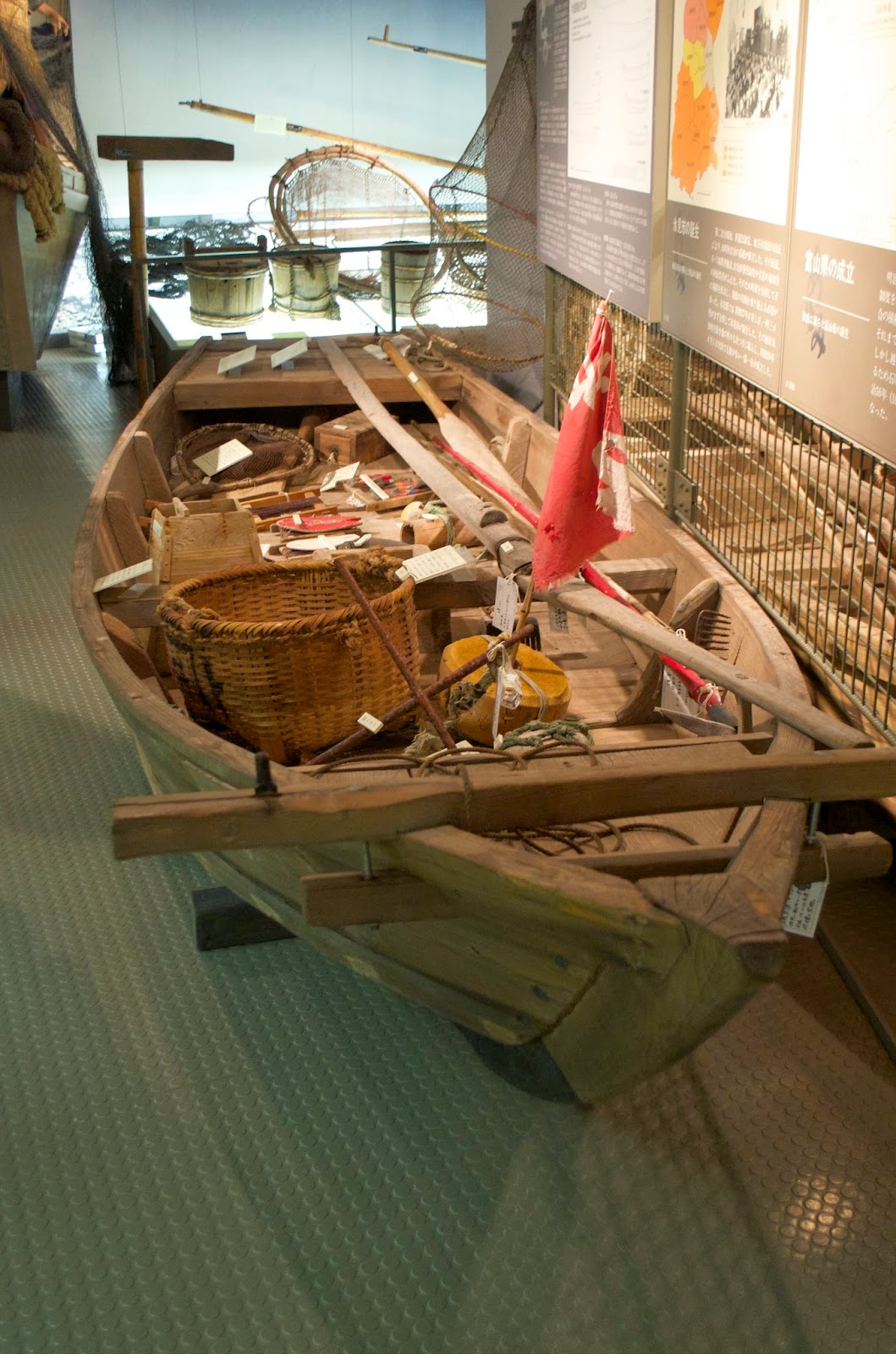 Bansho san called the museum and they opened up for us (Mondays are always museum holidays in Japan).  Bansho san's father's and grandfather's boats are on display.  A great museum.  Note how there is an iron post for the sculling oar set on the end of the forward beam.  I thought it was a crude replacement for the normal wood post for tying lines, but the curator explained that with this boat fisherman speared shellfish off the bottom and therefore needed to work off the stern, so when fishing they would row stern first. 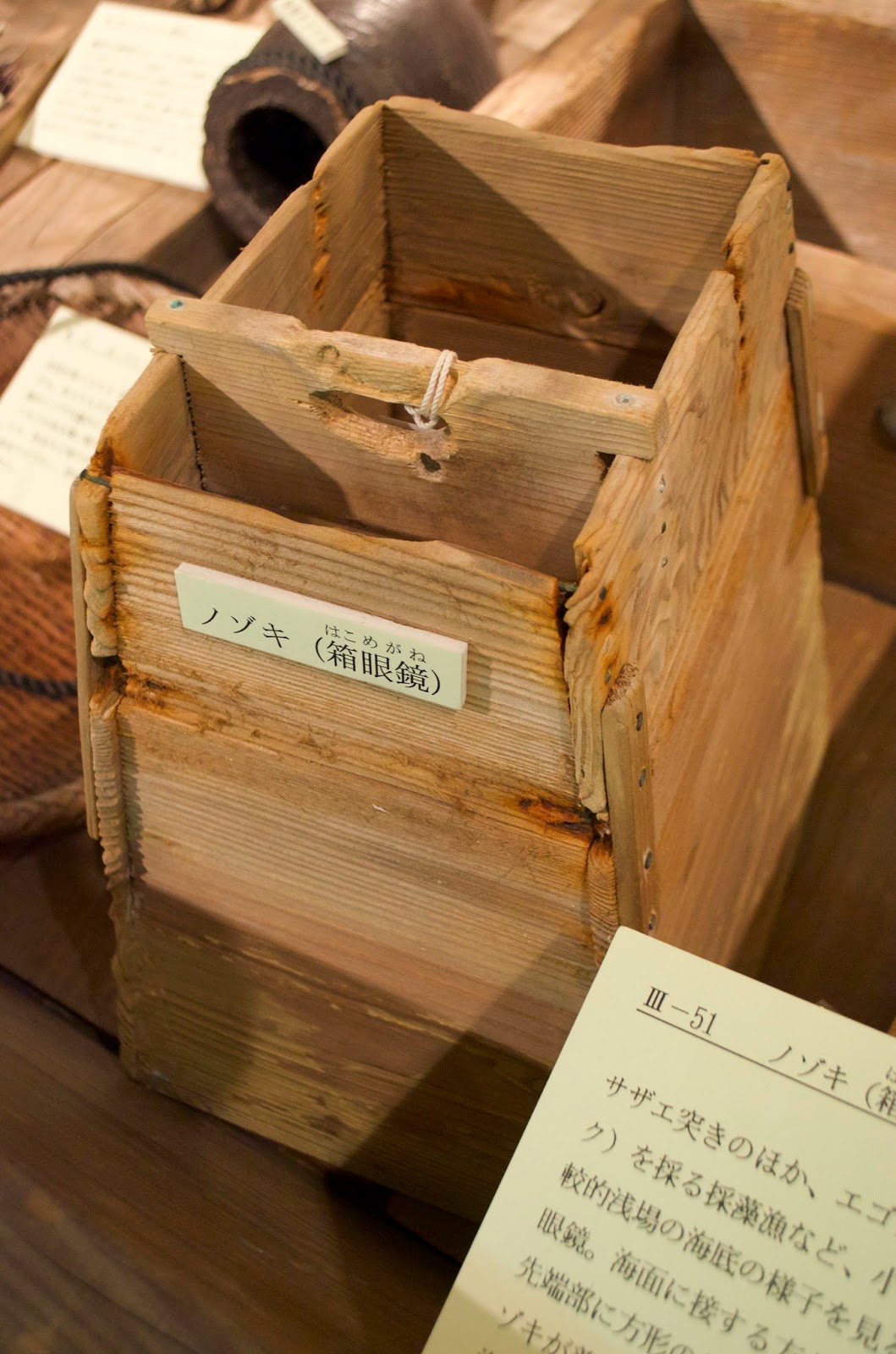 This wooden box has a glass bottom so the fisherman can see shellfish.  The cross piece is for biting, because you need both hands spearing therefore you hold the box with your teeth.  I have seen modern plastic versions of this sight box, because this style of fishing is still done all over Japan. 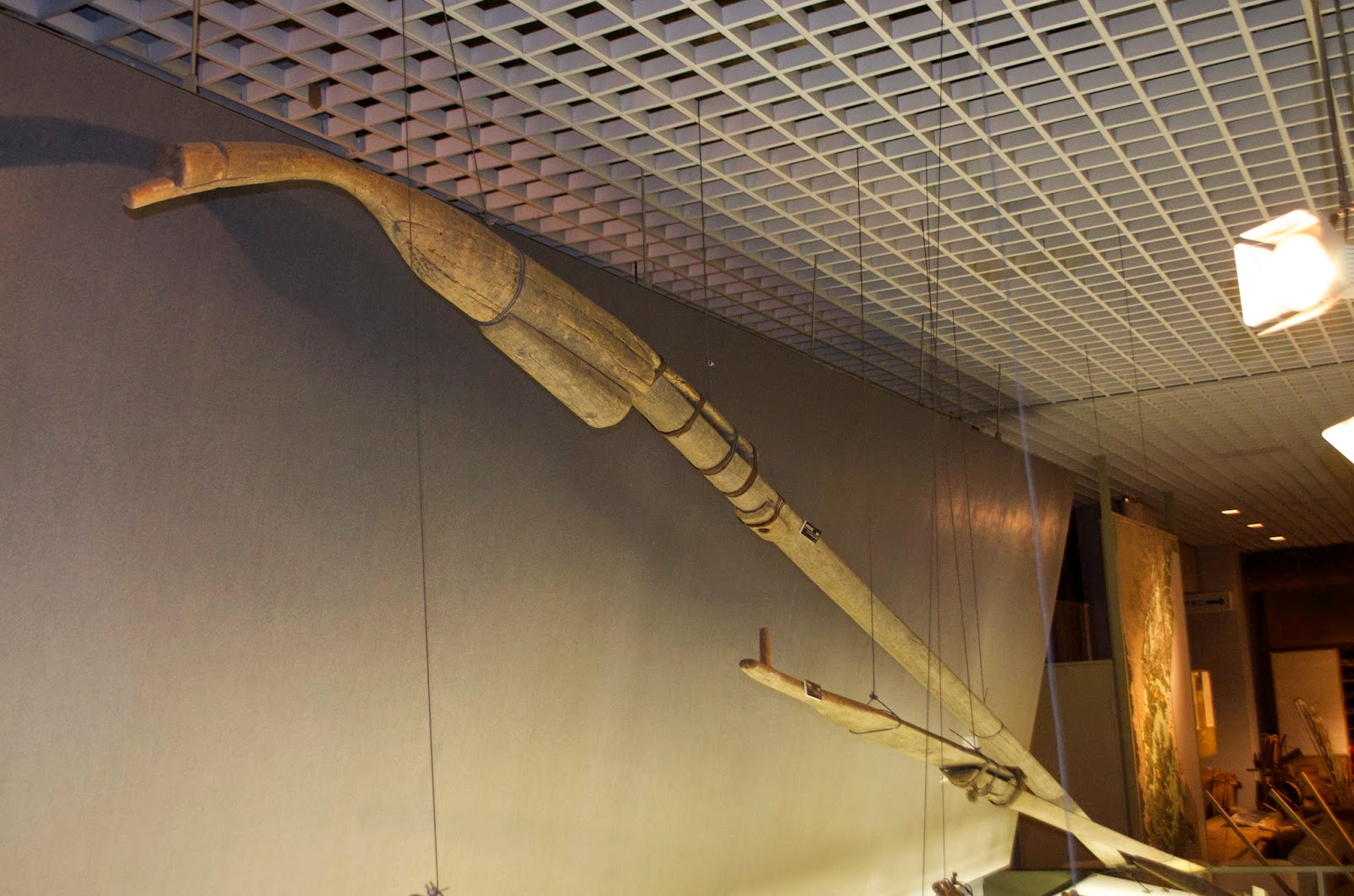 This is a massive, stern-mounted sculling oar with a most unusual (and sculptural) handle.  My hosts were a bit at a loss to explain it but the curved handle would help in feathering the blade, but this thing is (and looks like) a monster. 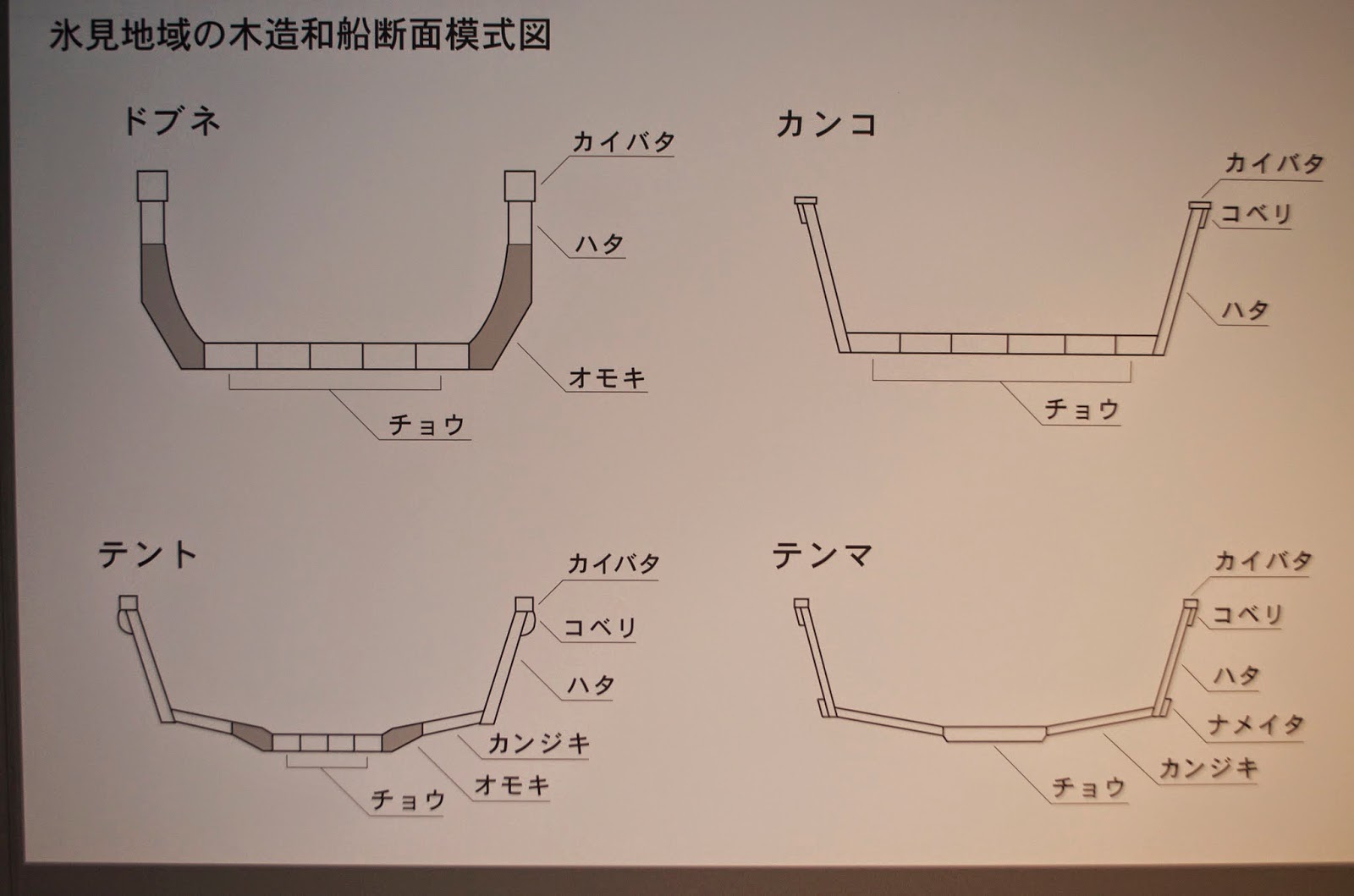 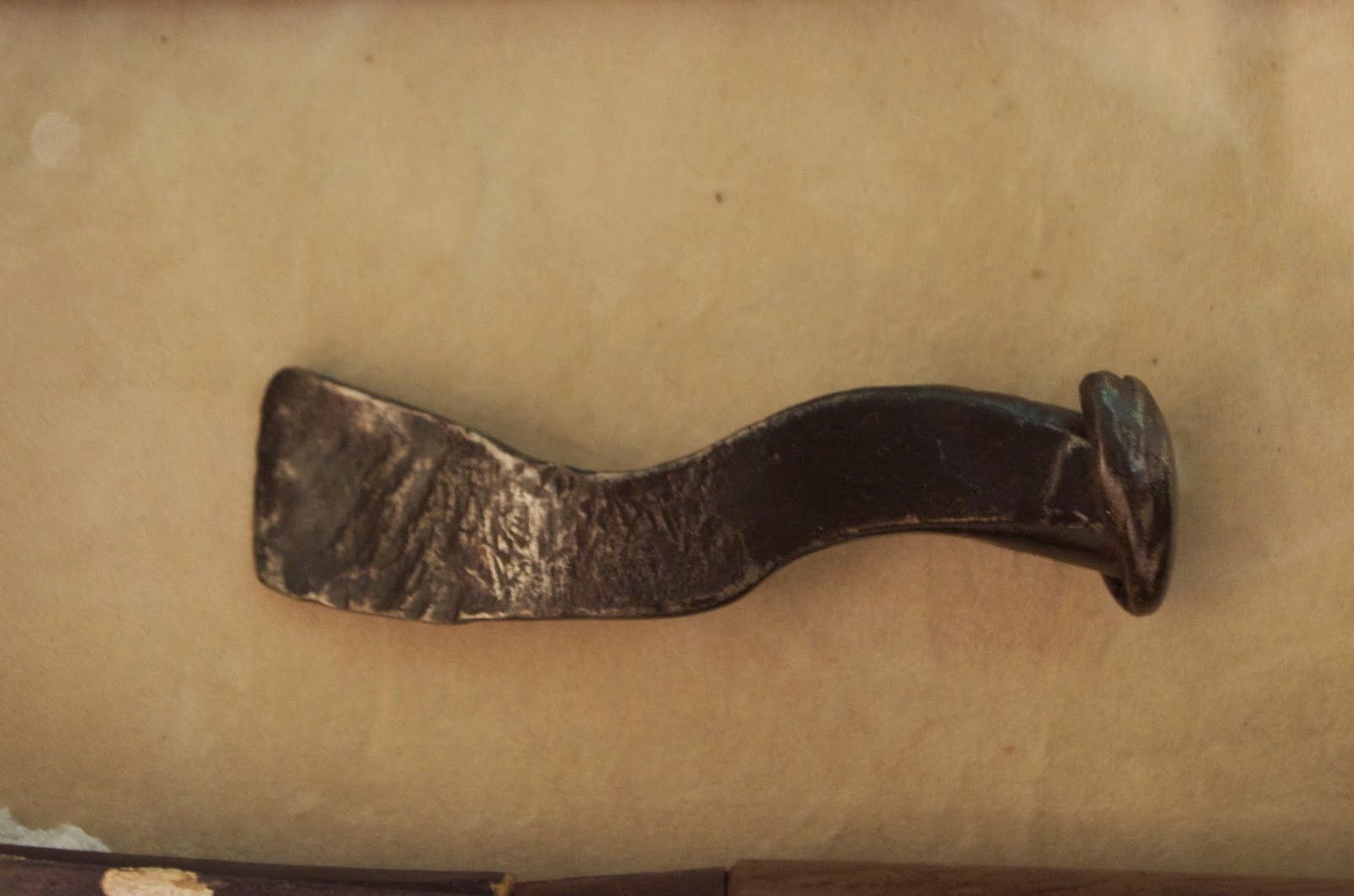 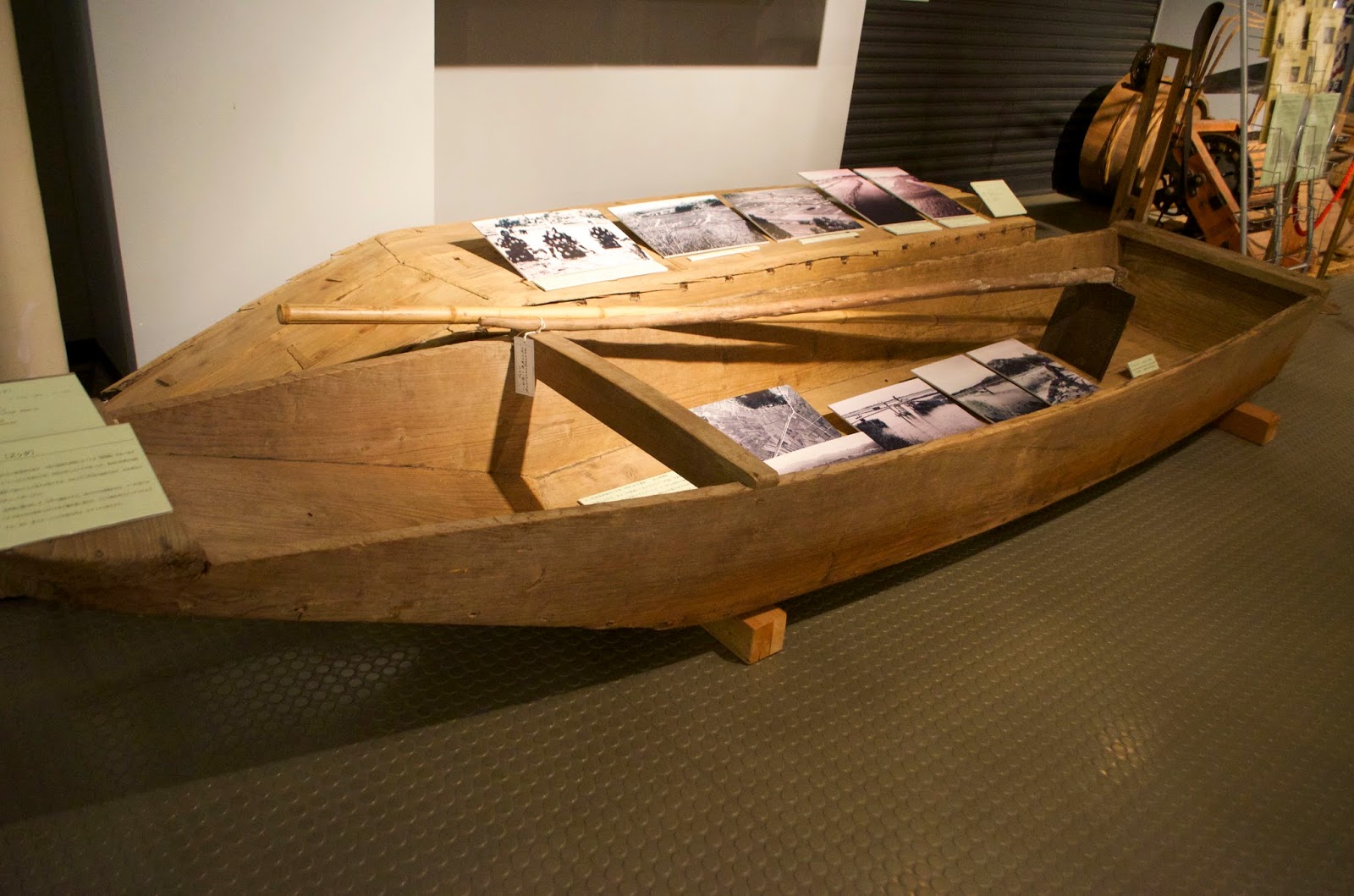 Extensive rice fields in this region had an entirely different class of boats, and it turns out separate boatbuilders as well.  Bansho san pointed out the styles of construction differed greatly, and he insisted sea boatbuilders were superior, but this was a lovely boat, with some interesting details. 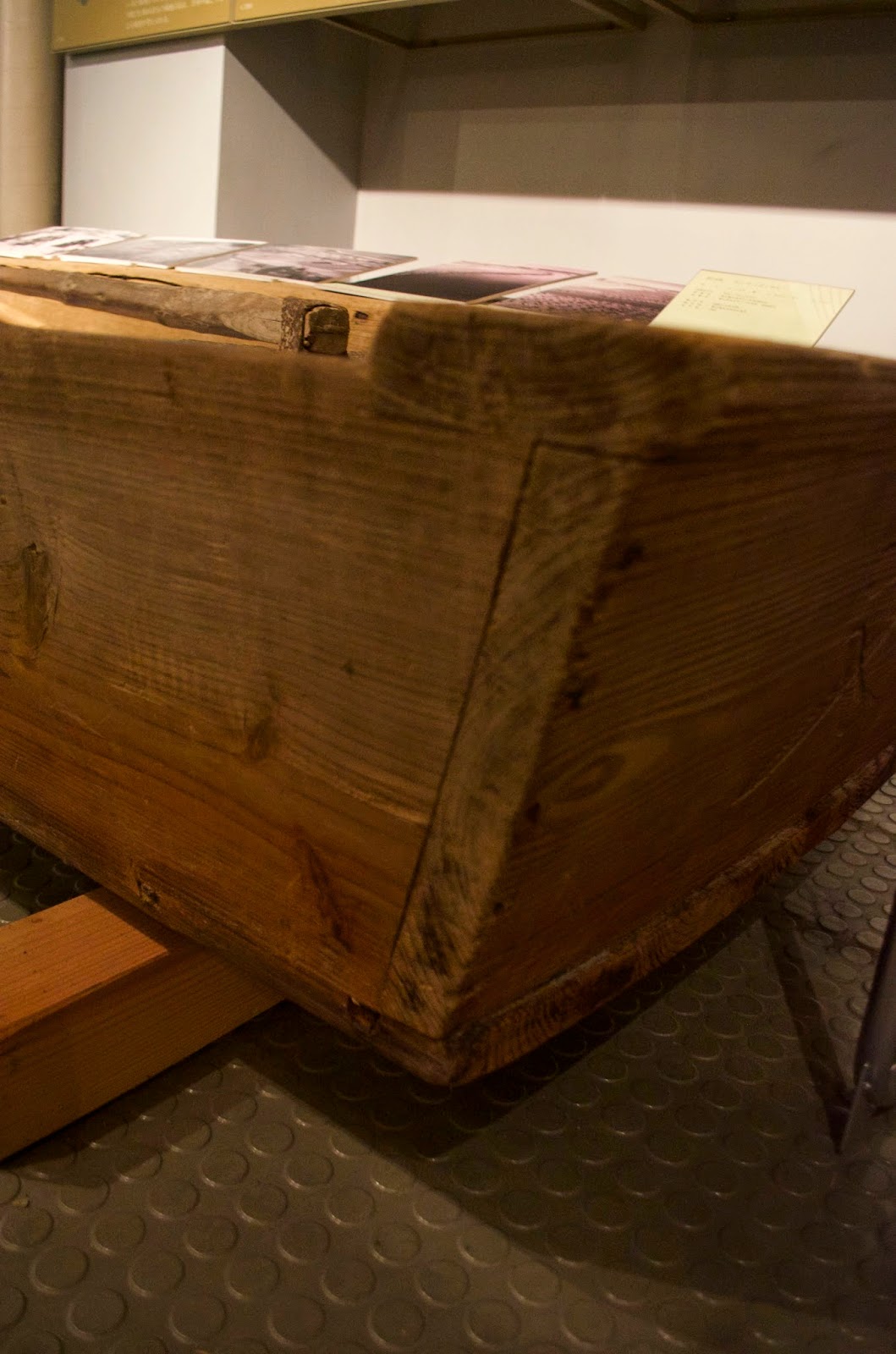 I pointed out how the transom lapped over the plank ends and not the other way around and Bansho san said, "See?  They didn't build boats like we did!" 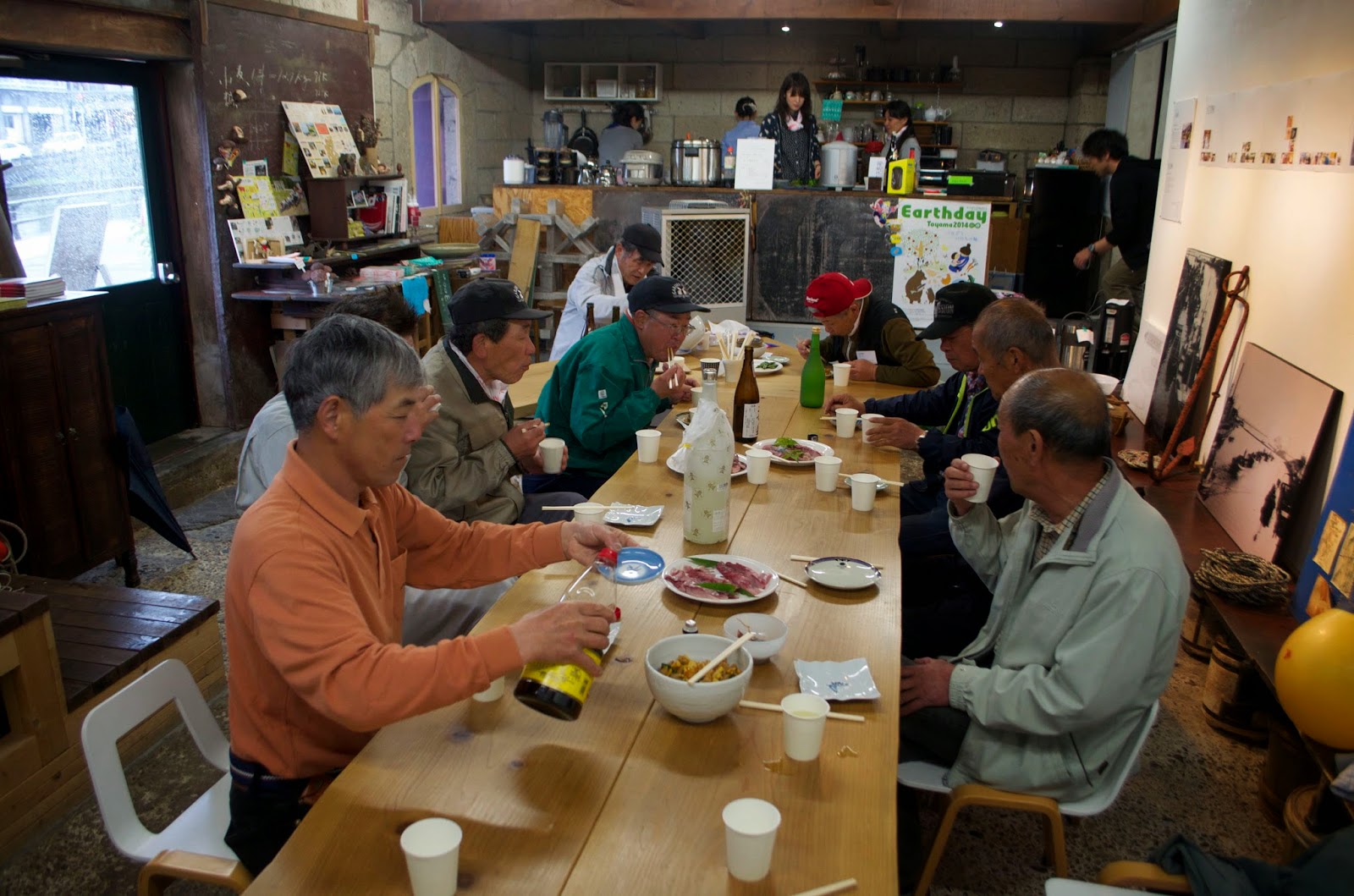 The day ended with a party for the NPO staff and volunteers.  That's Bansho san in the orange shirt.  We had a full range of seafood and vegetables and, of course, sake.  There were even two bottles of a local merlot. 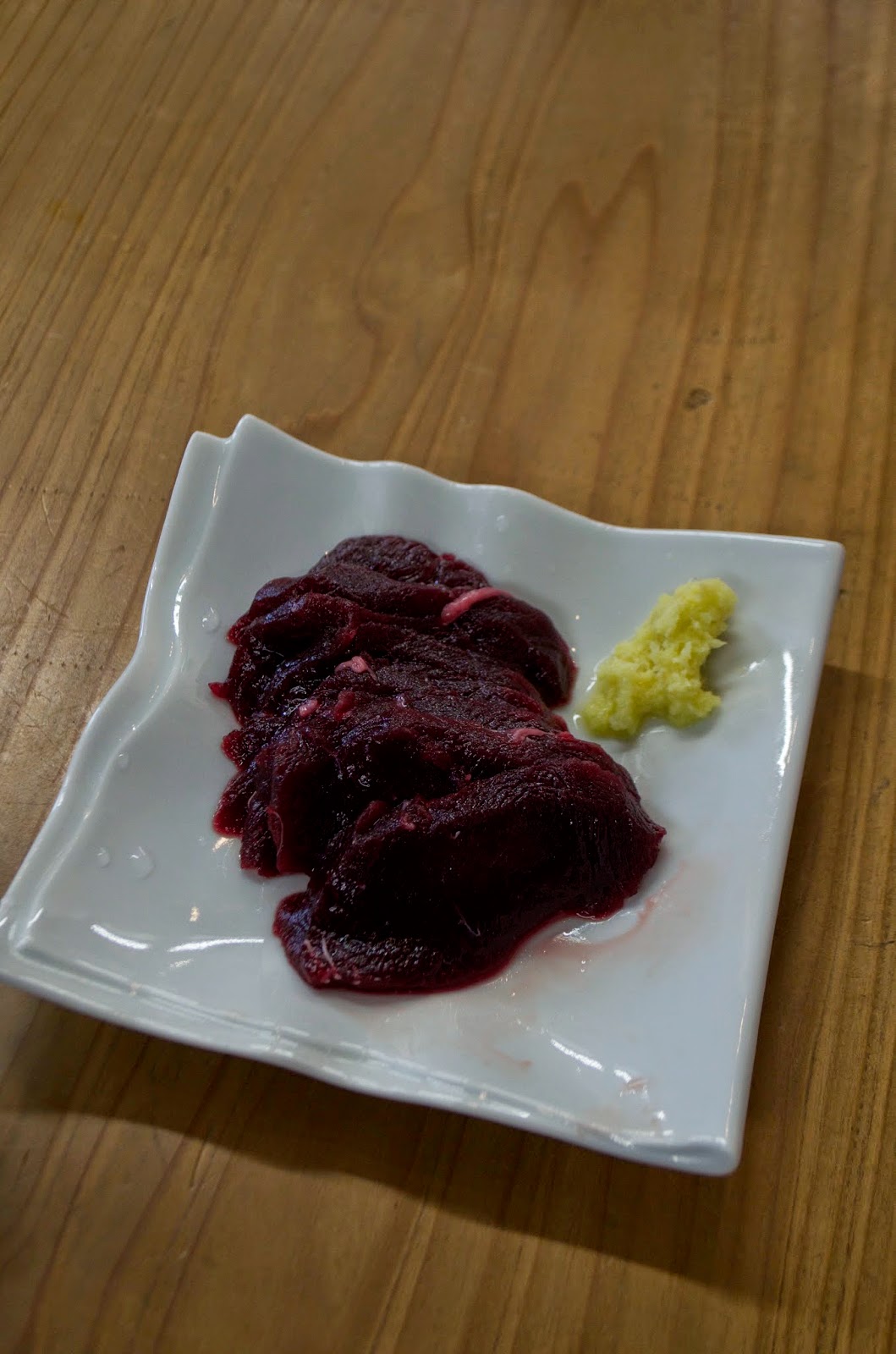 And whale meat.  Raw.  My hosts explained that there is no actual whaling in this region and never was, but fishermen to this day occasionally catch a whale in their fish nets.  They are allowed to keep them but this doesn't amount to more than one or two whales a year.  As a little debate started on Japanese whaling I heard one elderly man say, "Americans caught whales just for the oil and wasted the rest."

Posted by Douglas Brooks at 4:21 PM