Last year my friend Angela, who studied bucket-making at North House Craft Center, sent me a fascinating video of a 15th generation okeyasan, or bucket maker, from Kyoto.  I was hoping I could find him while I was in town and I asked my friend Austin, who lives here, to do a web search.  He came up with a different bucket maker in the same neighborhood.  Since his website had a map I decided to see him first and hope he could lead me to the other craftsman. 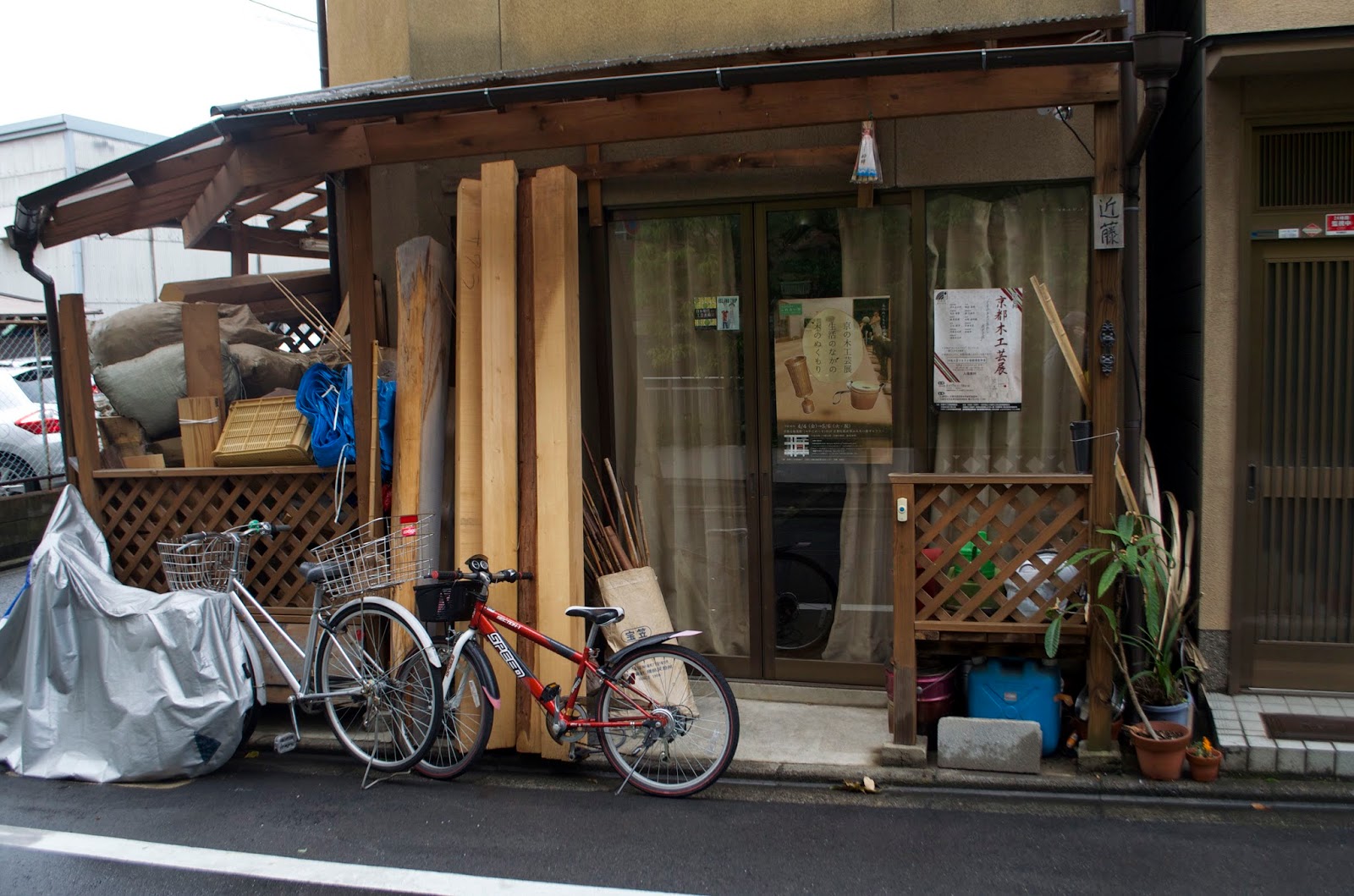 The exterior of his shop.  Konda san studied sculpture at an art school, working in wood, metal, stone and fiberglass.  At age 29 he apprenticed with an okeyasan for six years before opening his own shop five years ago.  His website is: https://oke-kondo.jimdo.com. 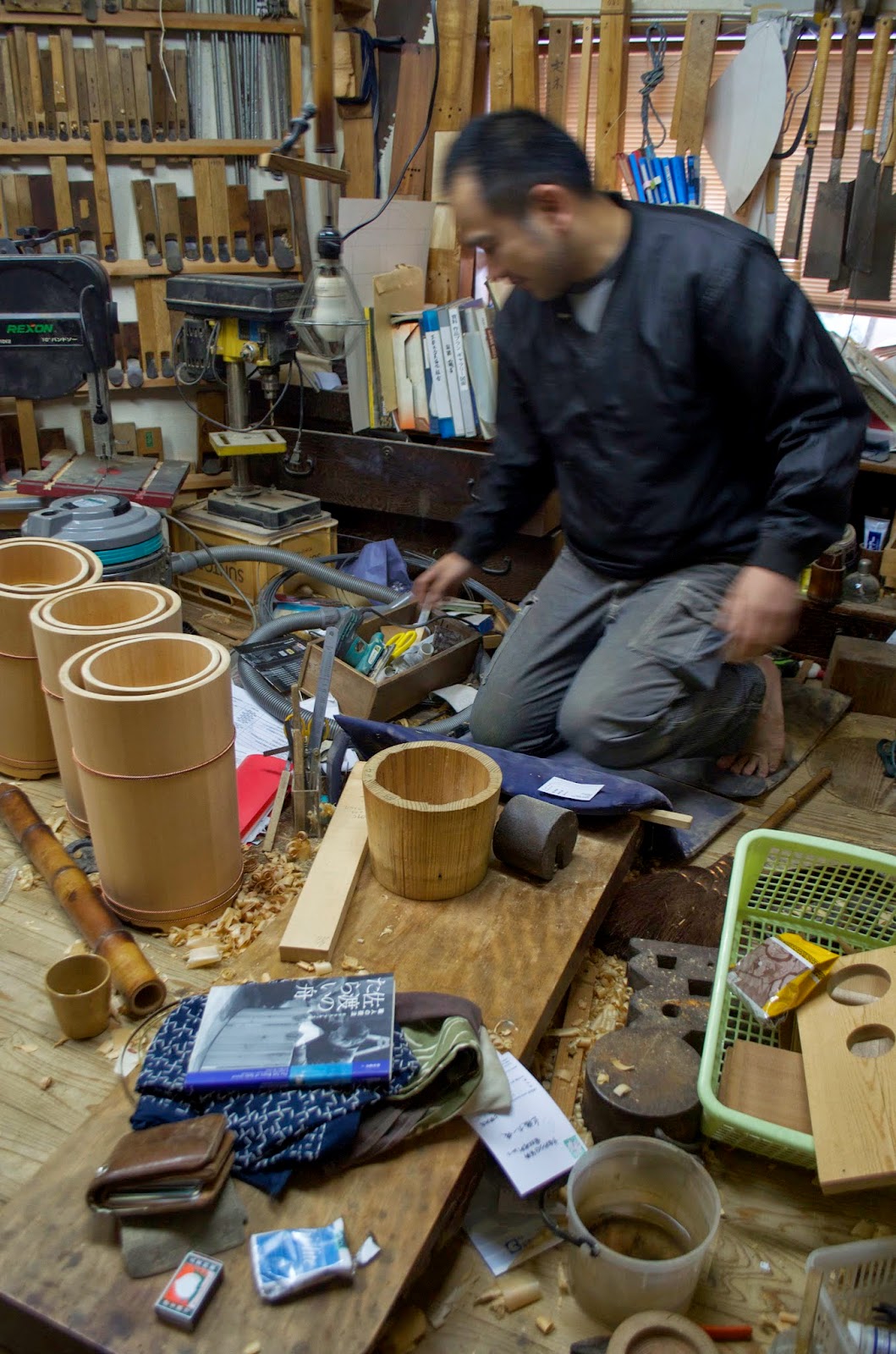 As I introduced myself Kondo san cried out, "Are you Douglas Brooks?"  He turned around and produced my book on building tub boats.  He said what he found most intriguing about my work building tub boats was how they had curved bottoms. 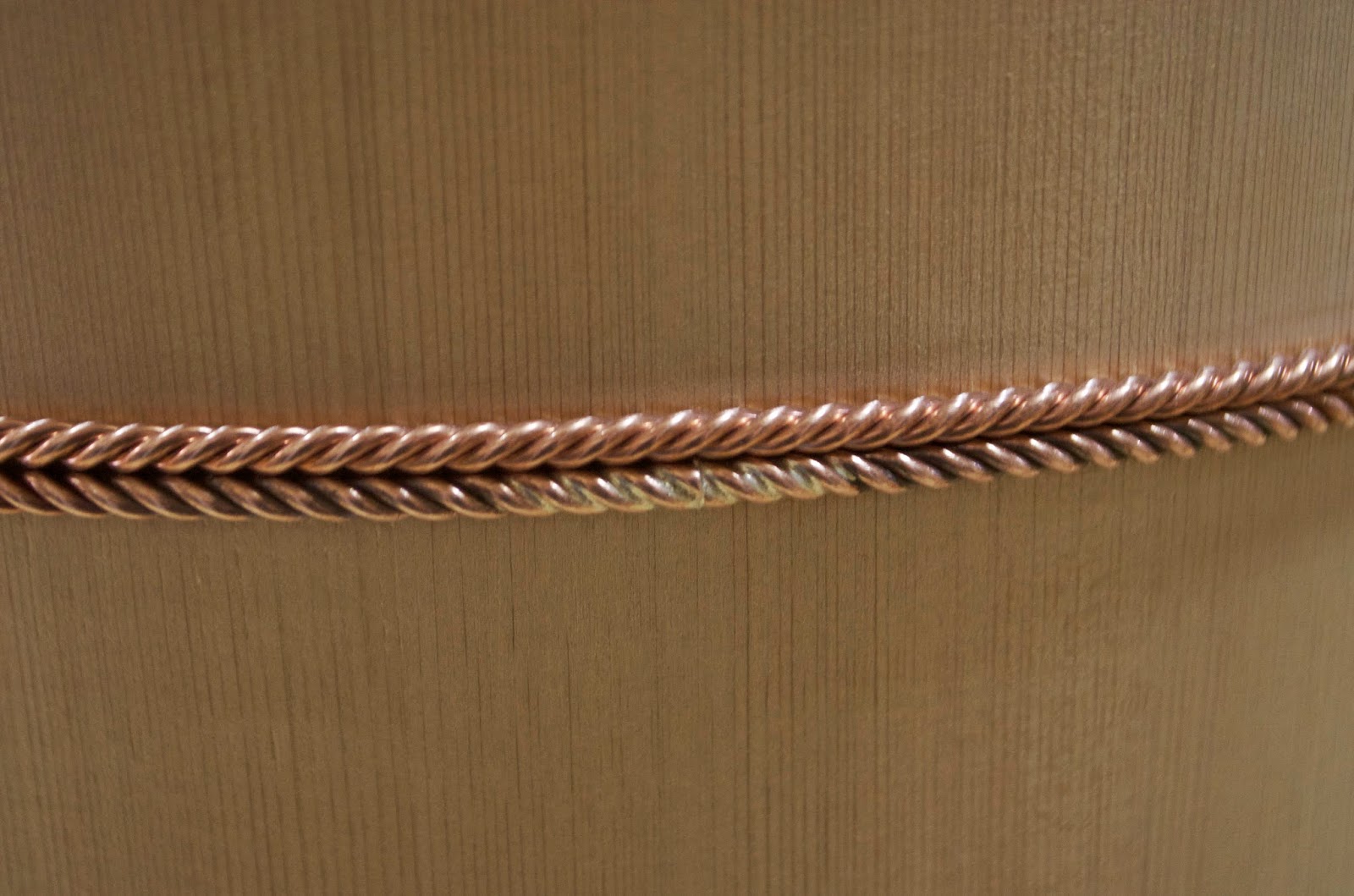 I've always been intrigued by the use of wire hoops.  Kondo san said he brazes them together, but I am certain some are made by overlapping the ends. 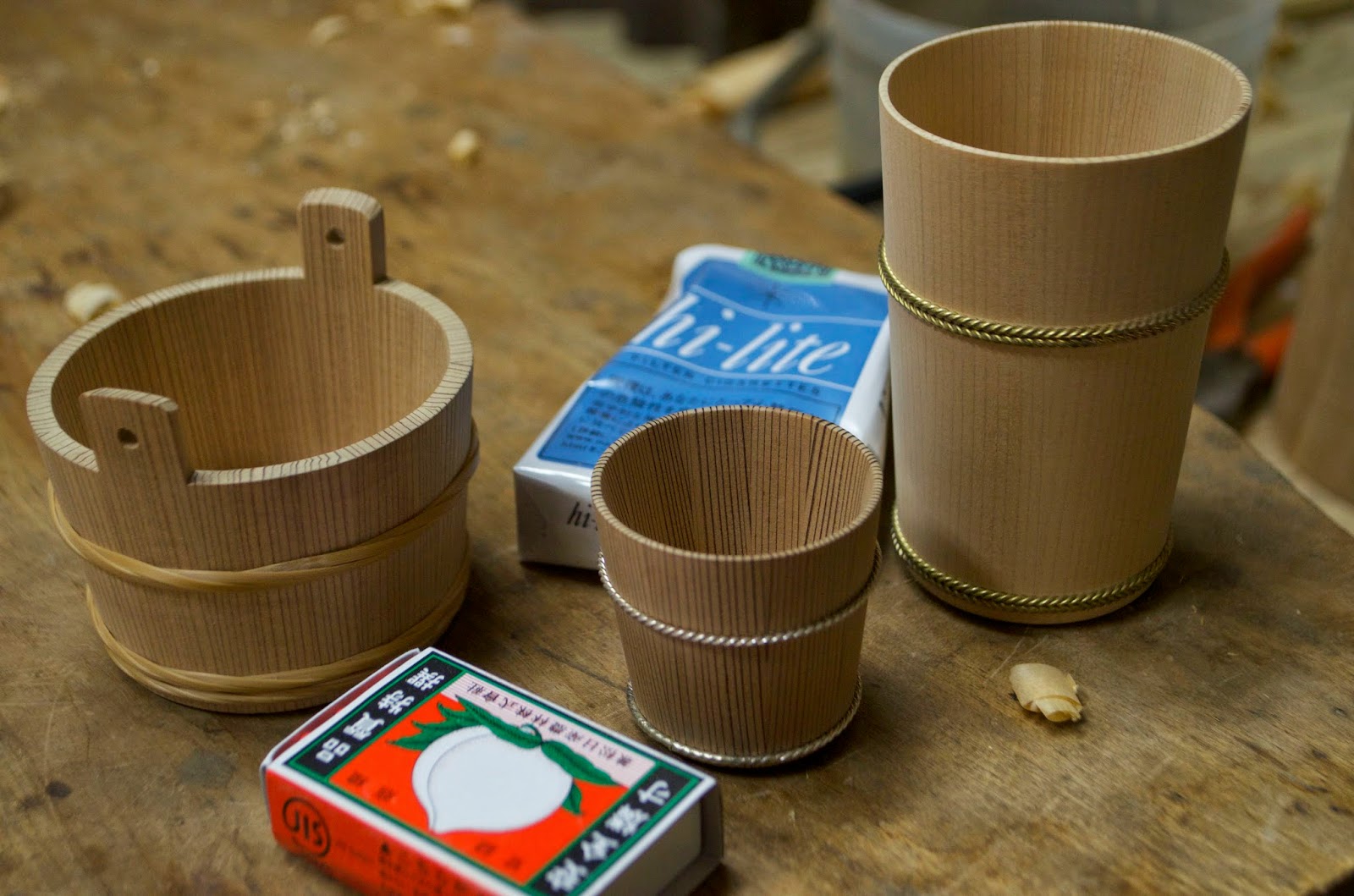 The pack of cigarettes and match box give you an idea of some of the small items he makes. 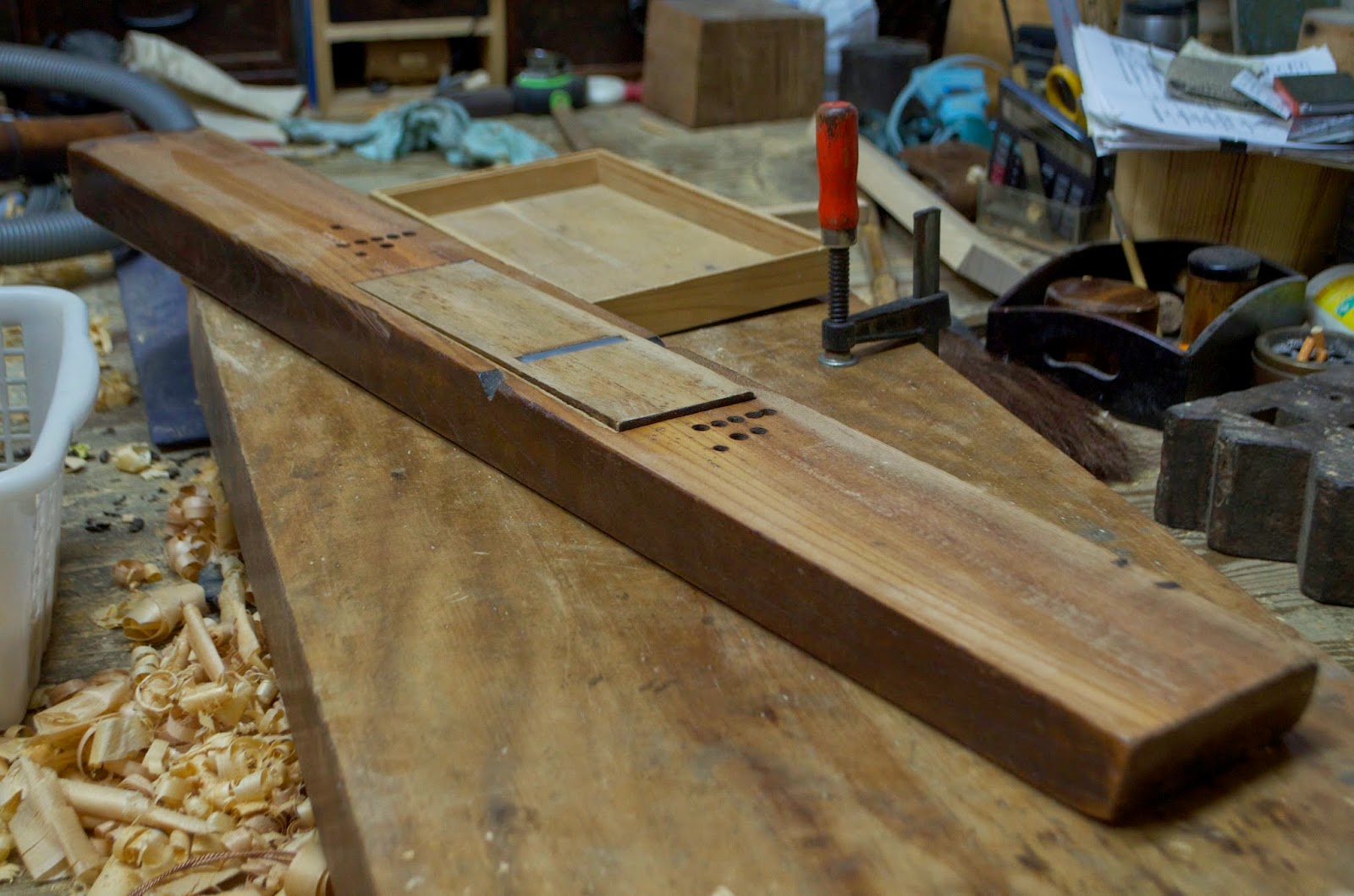 One of his planes set into a long block becomes a joiner.  Long joiner planes are relatively rare in Japan, but this is a great solution.  He called this a shoujikidai. 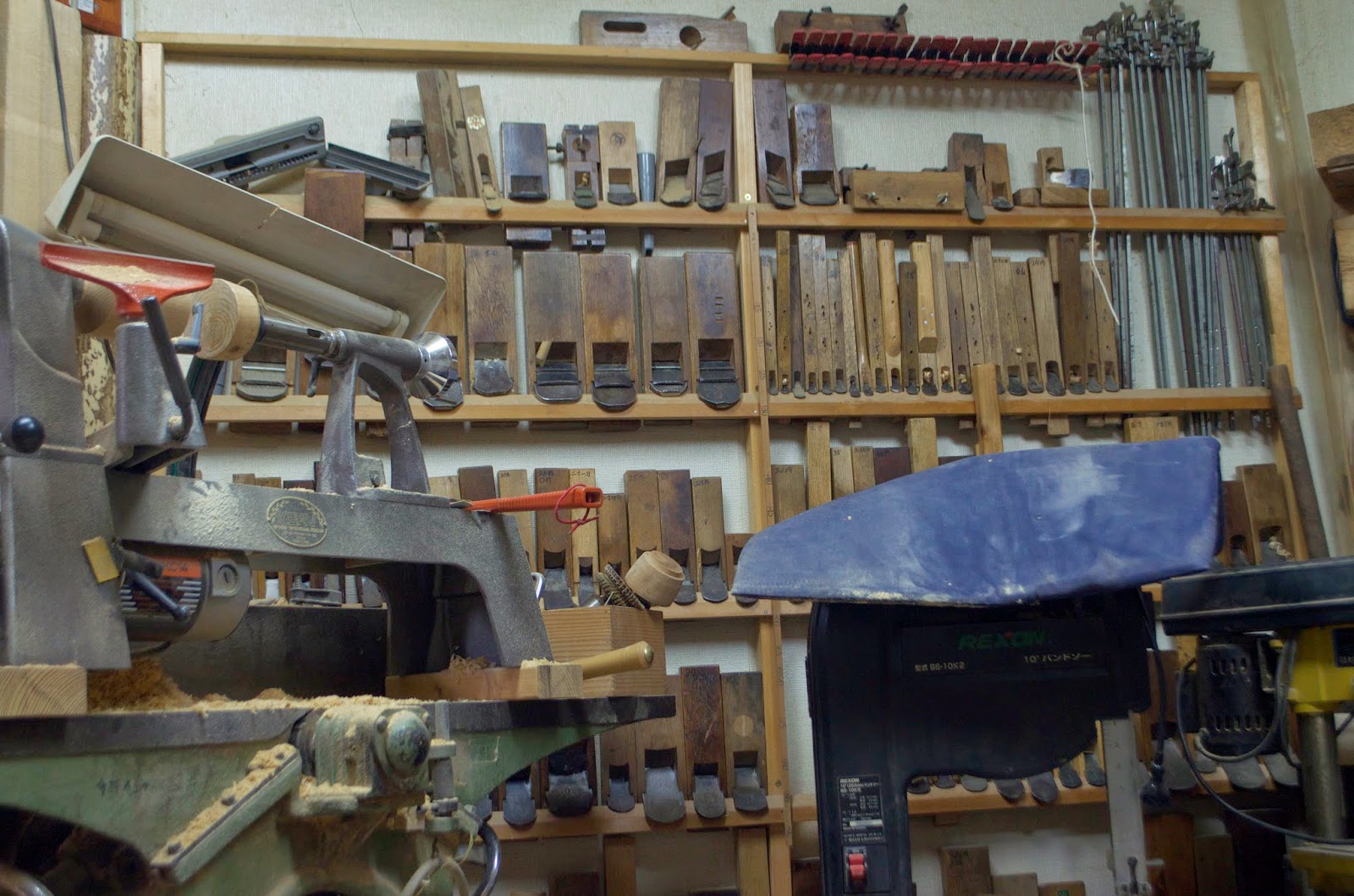 Kondo san has an amazing collection of planes for his work, mostly round-bottomed. 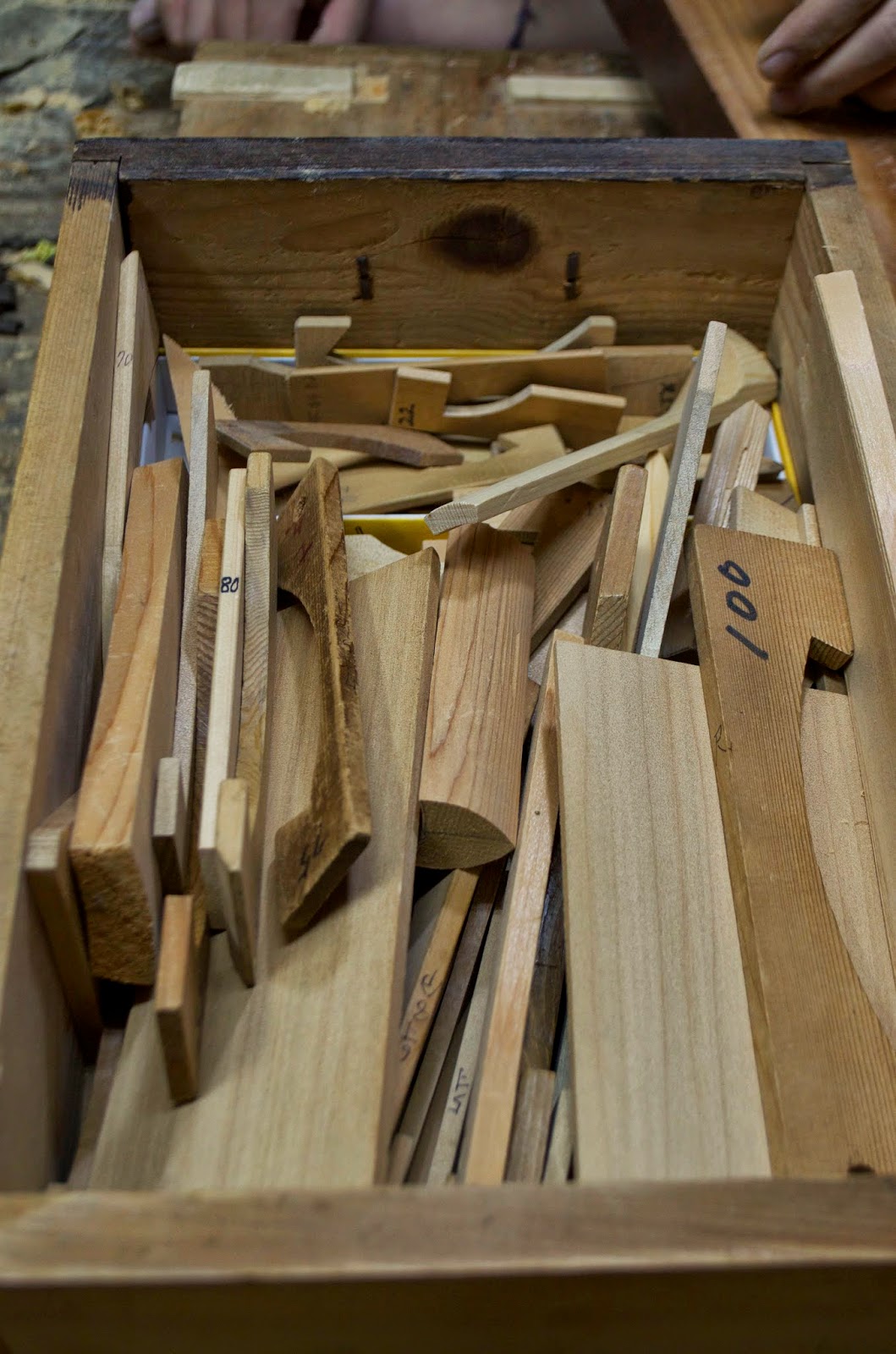 And dozens of patterns, one for every size vessel he makes. 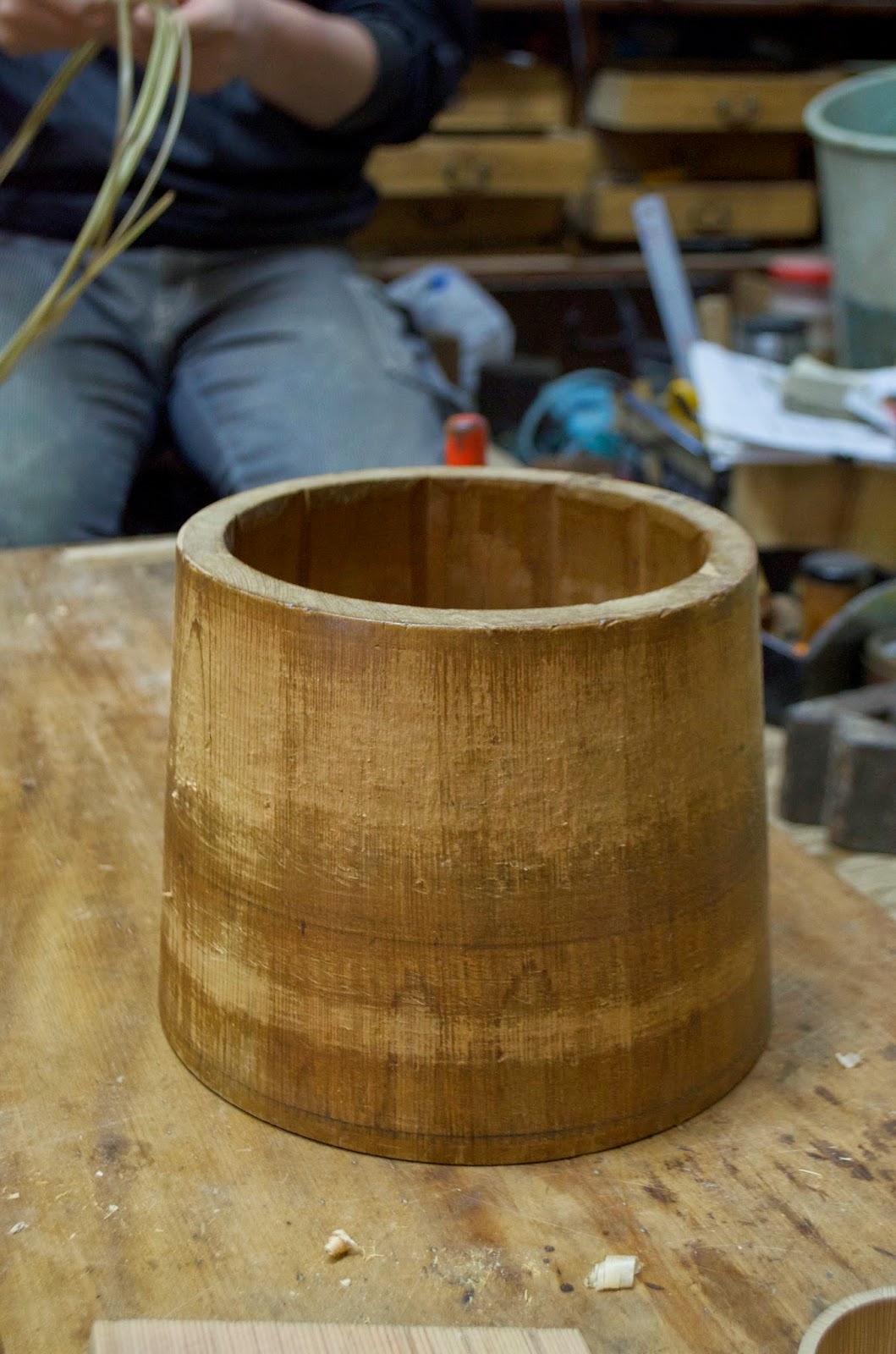 He sizes his hoops, whether metal or bamboo, by fitting them over this form, which he called wanobashi. 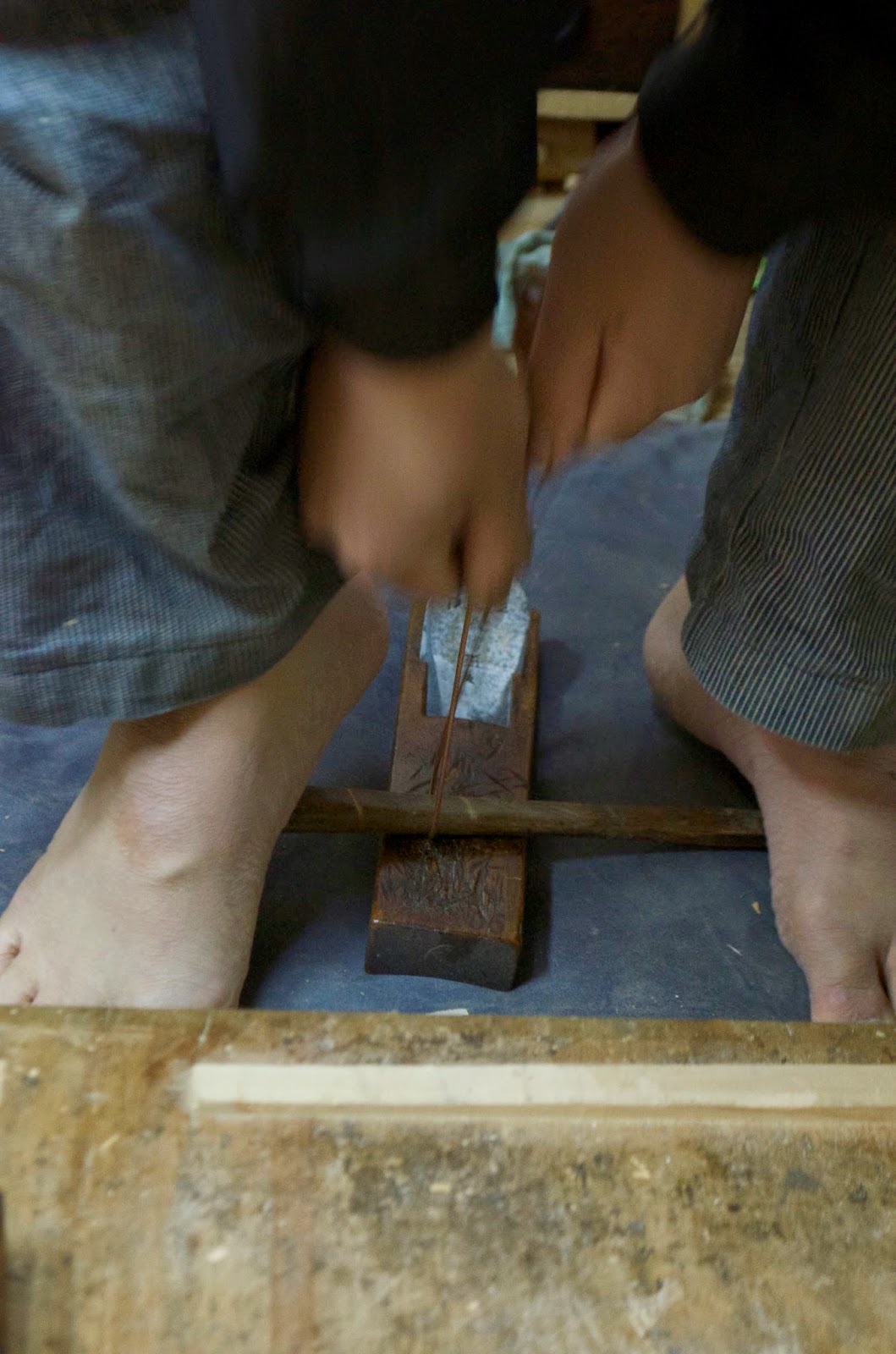 He showed me how he loops a metal hoop over his hammer handle, steps on the handle and pulls the hoop in a circle, stretching it slightly if necessary to get a good fit. 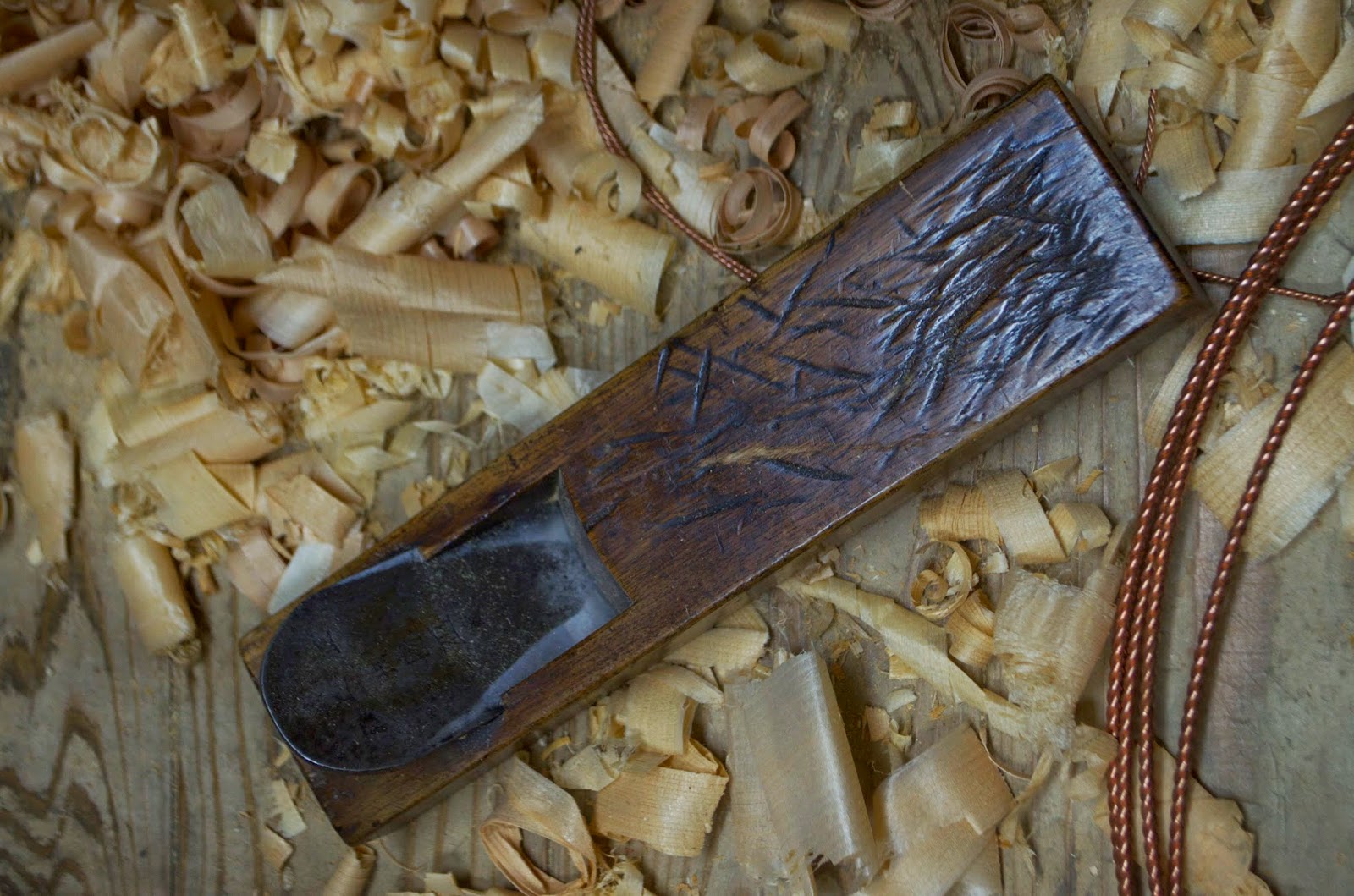 And this is what it does to the plane he uses as a bench. 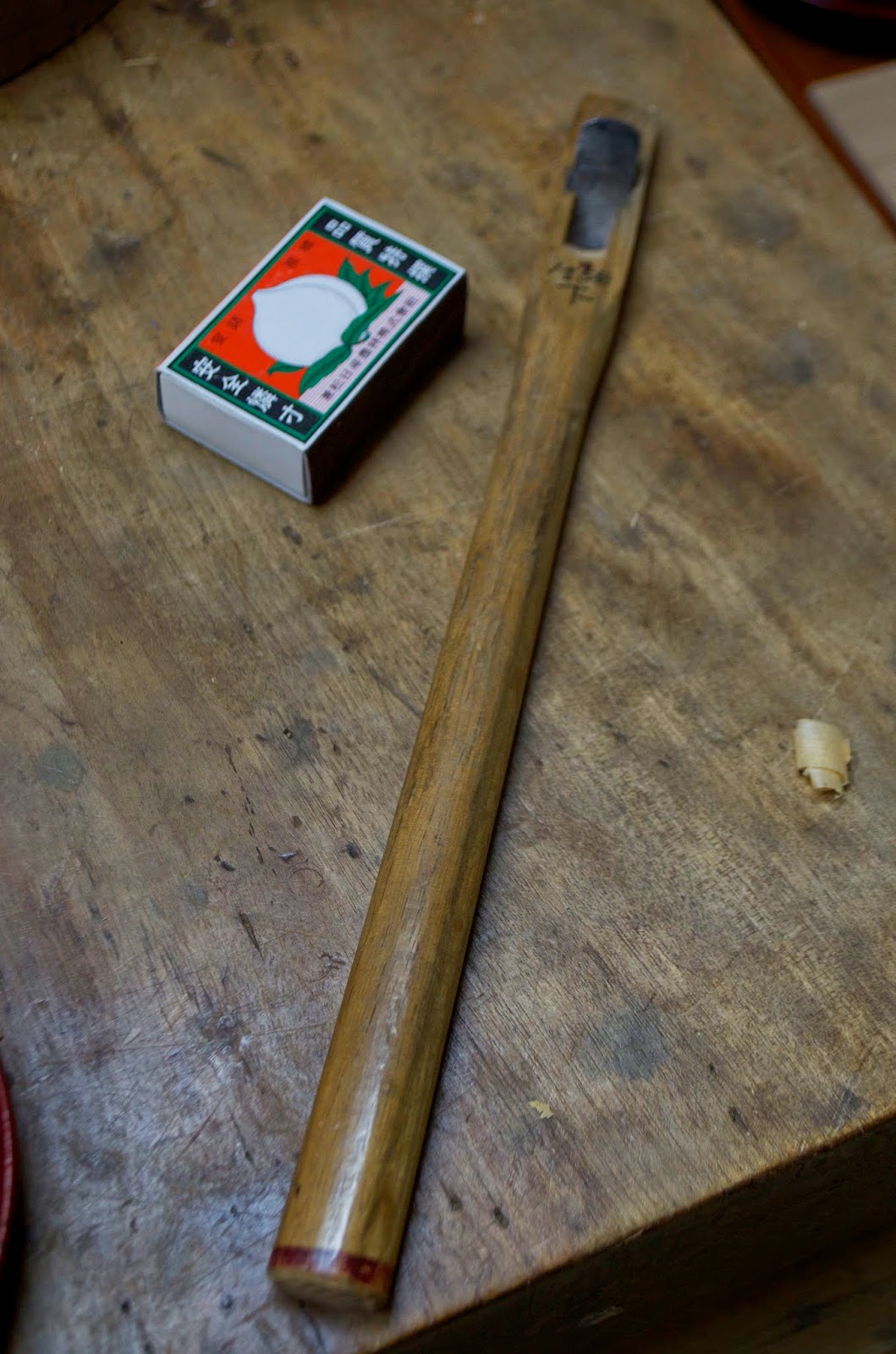 These specialized planes are for reaching inside small buckets and shape the inside. 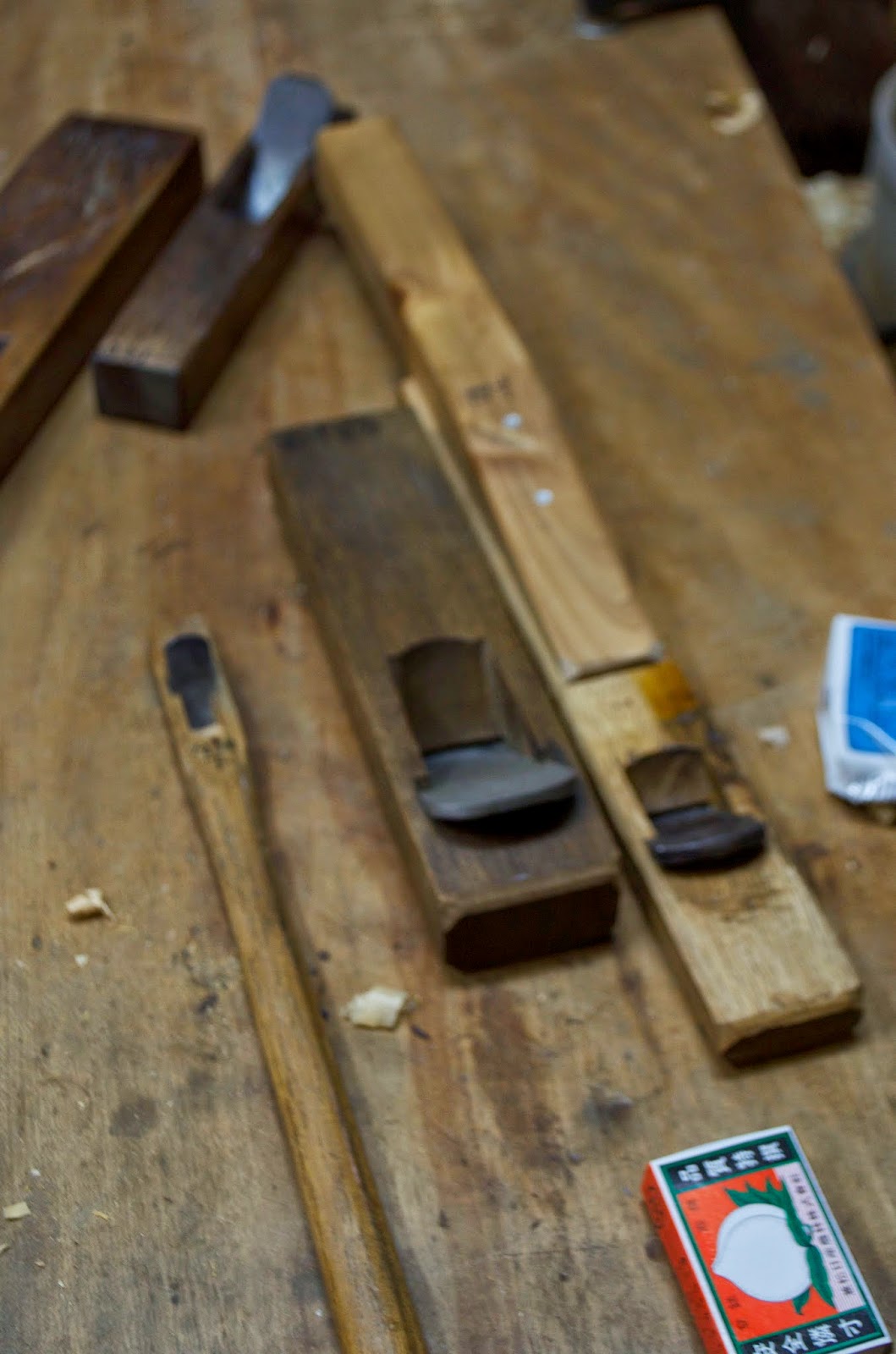 A selection of specialty planes. 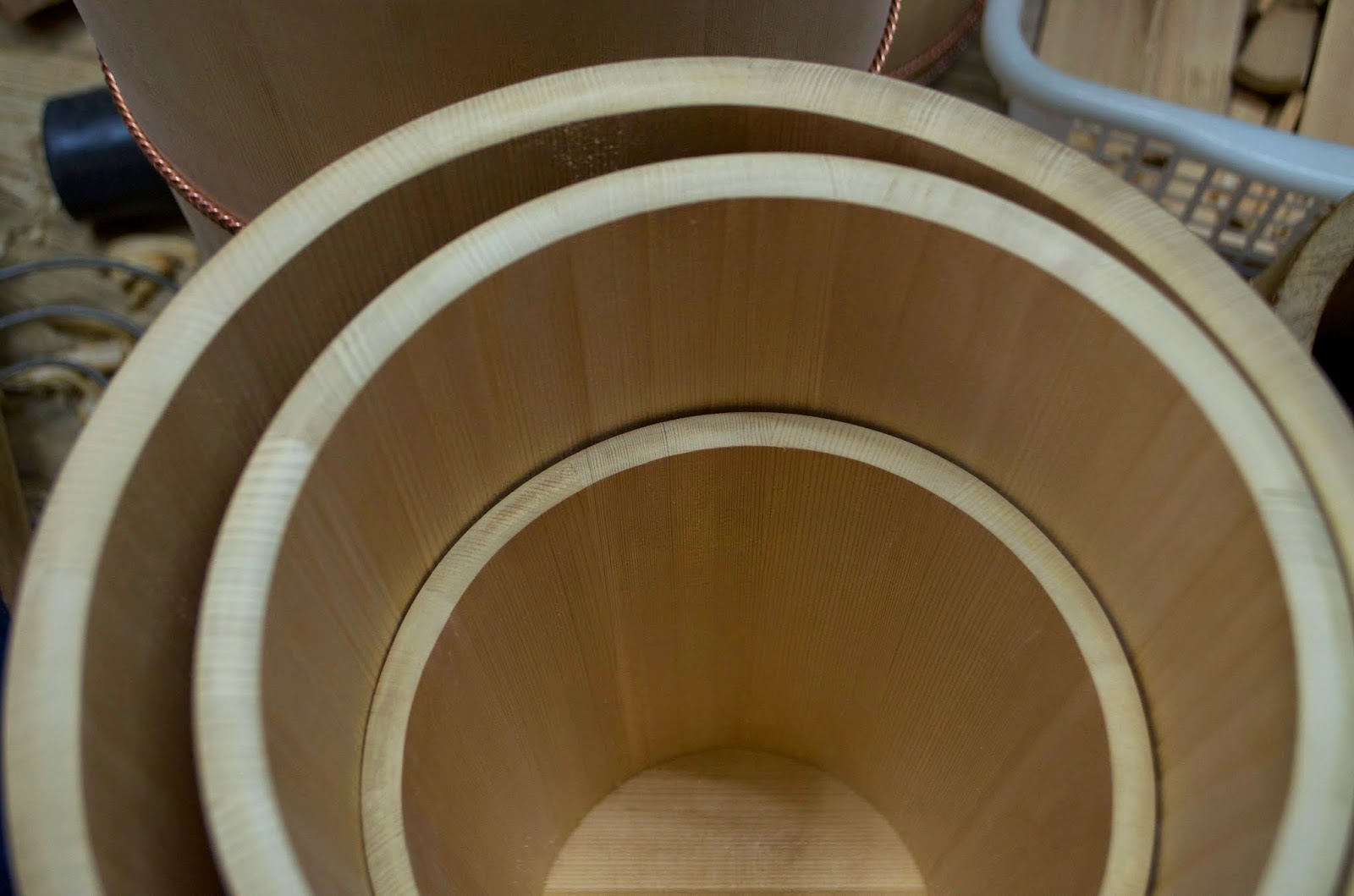 He works only with vertical grain wood, absolutely exquisite material, that he gets from Akita Prefecture in the north. 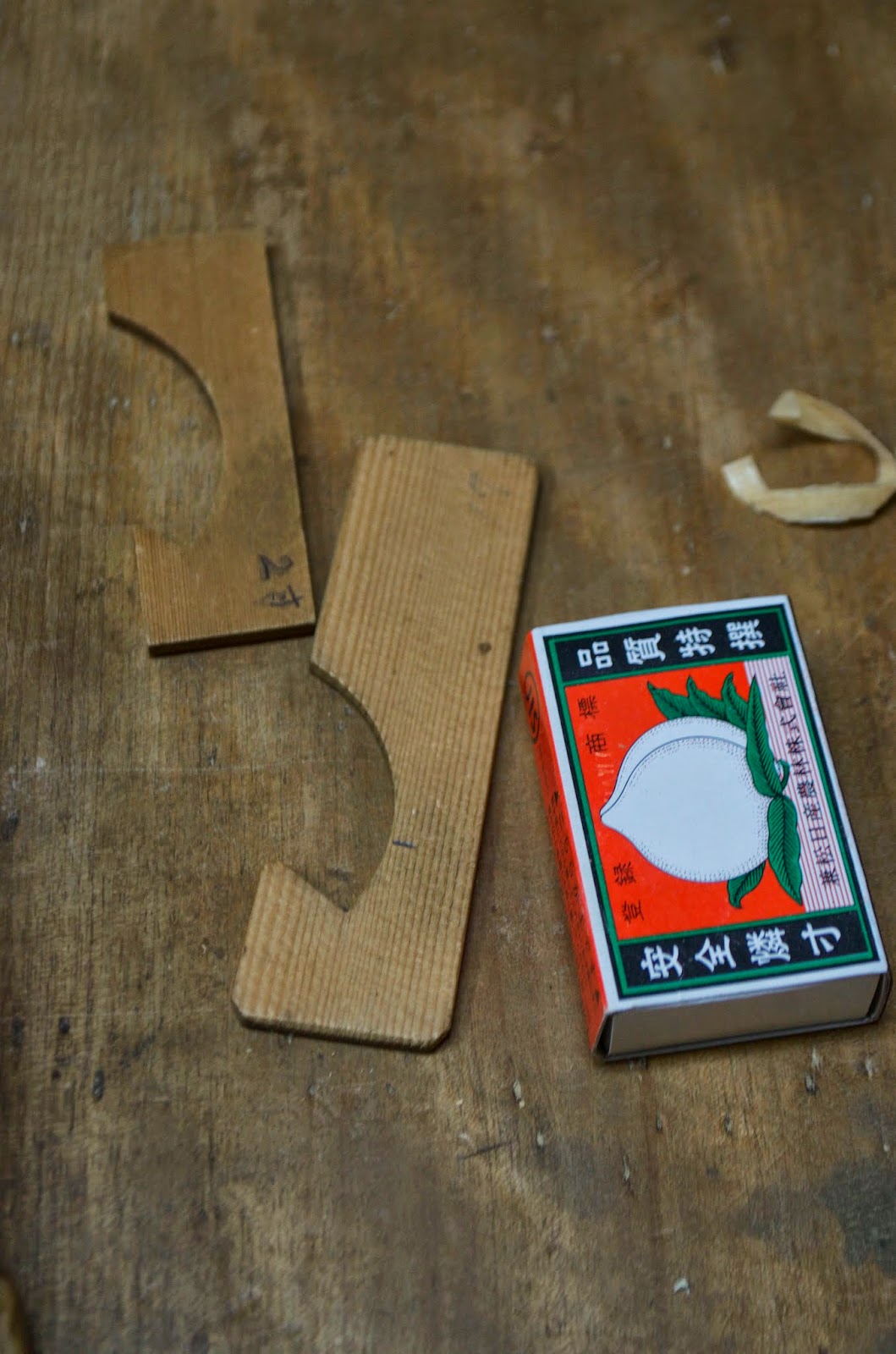 Typical patterns that give him the outside curvature and the angle of the edge of staves. 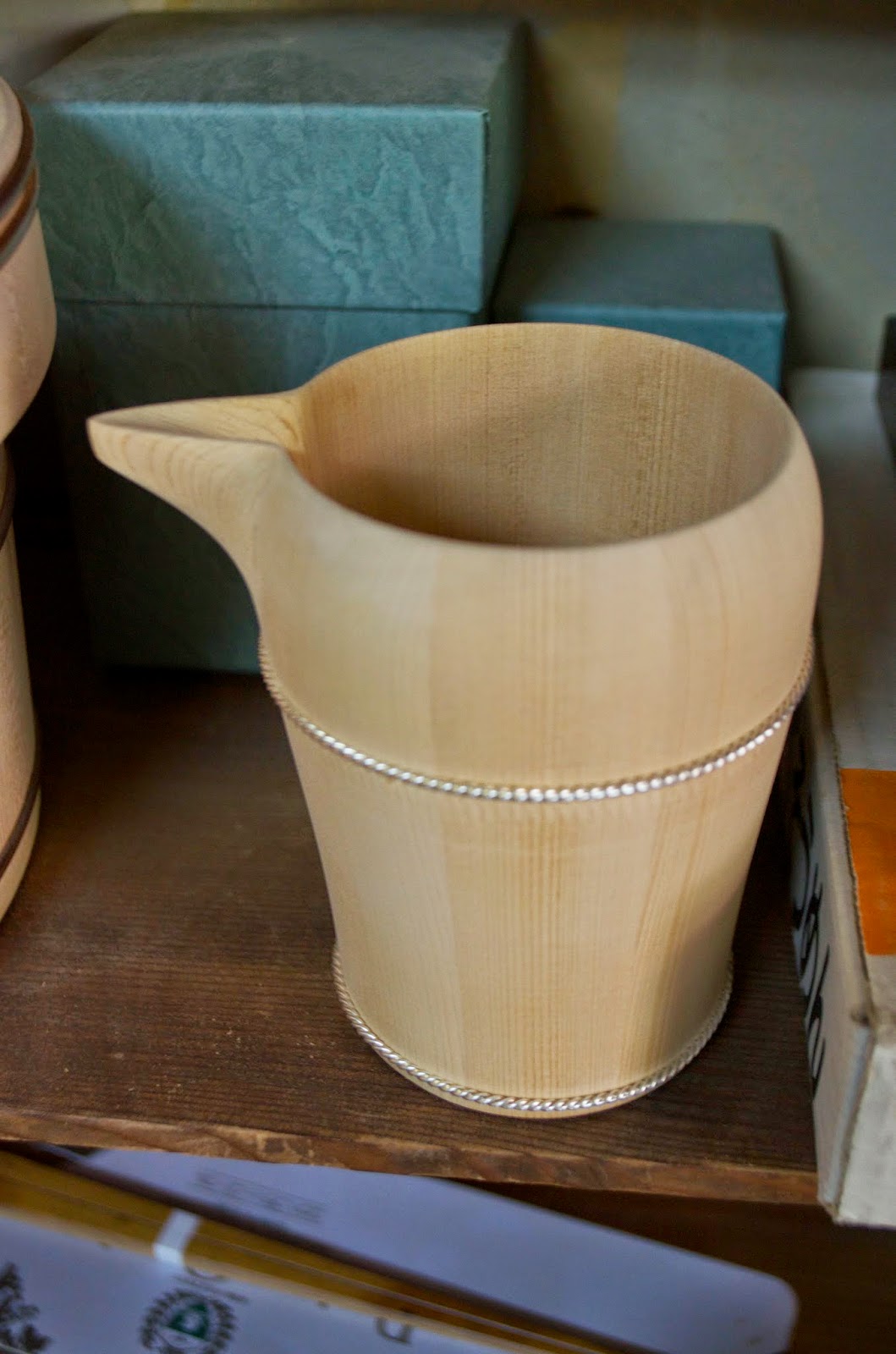 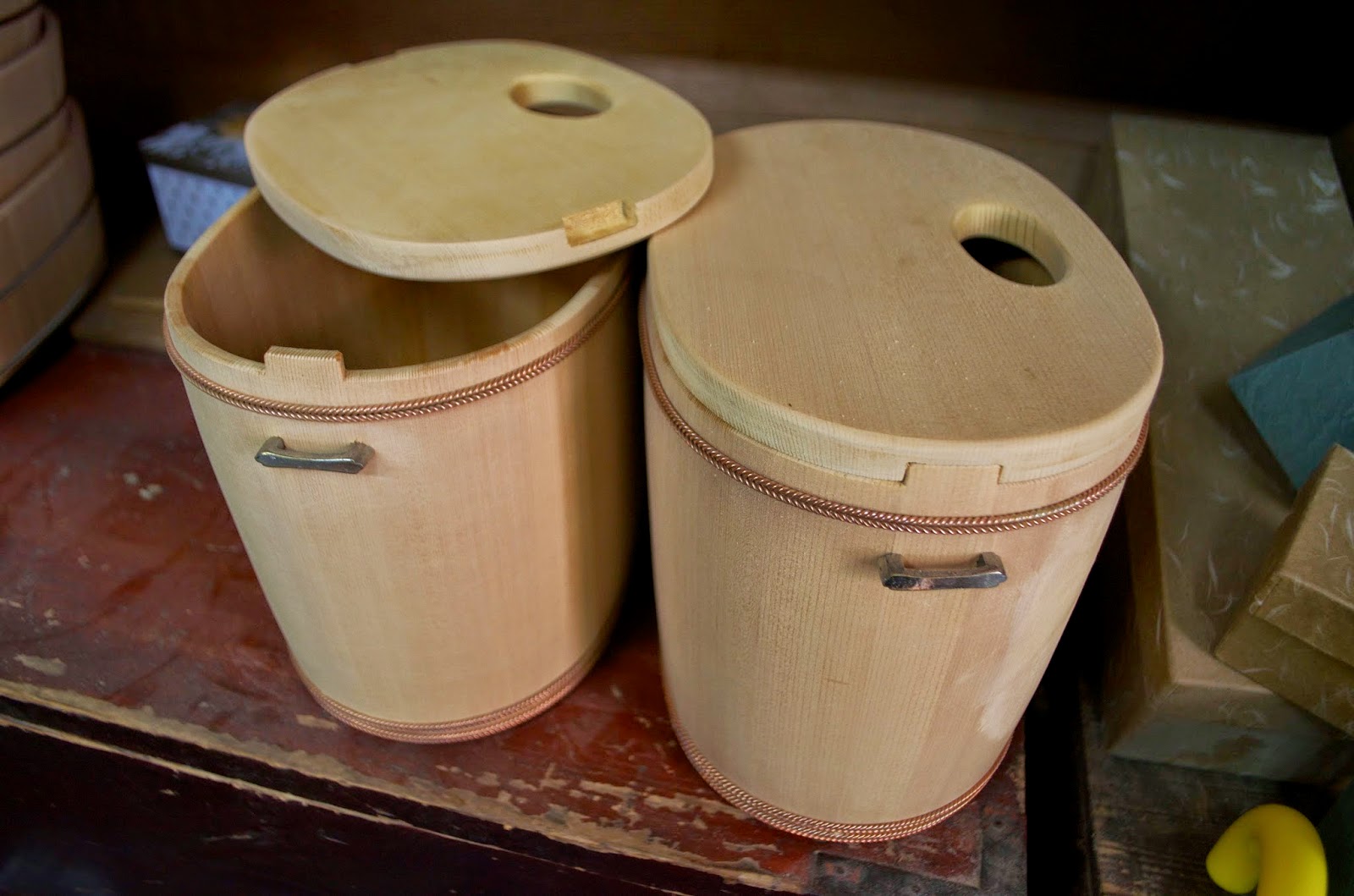 A pair of fishing creels.  Kondo san said he does glue the staves of his buckets together, using regular Bondo brand white woodworking glue.  The only difference is when he makes the large, shallow tubs for sushi rice and then he makes a glue out of pounded cooked rice, a formulation he called sokui. 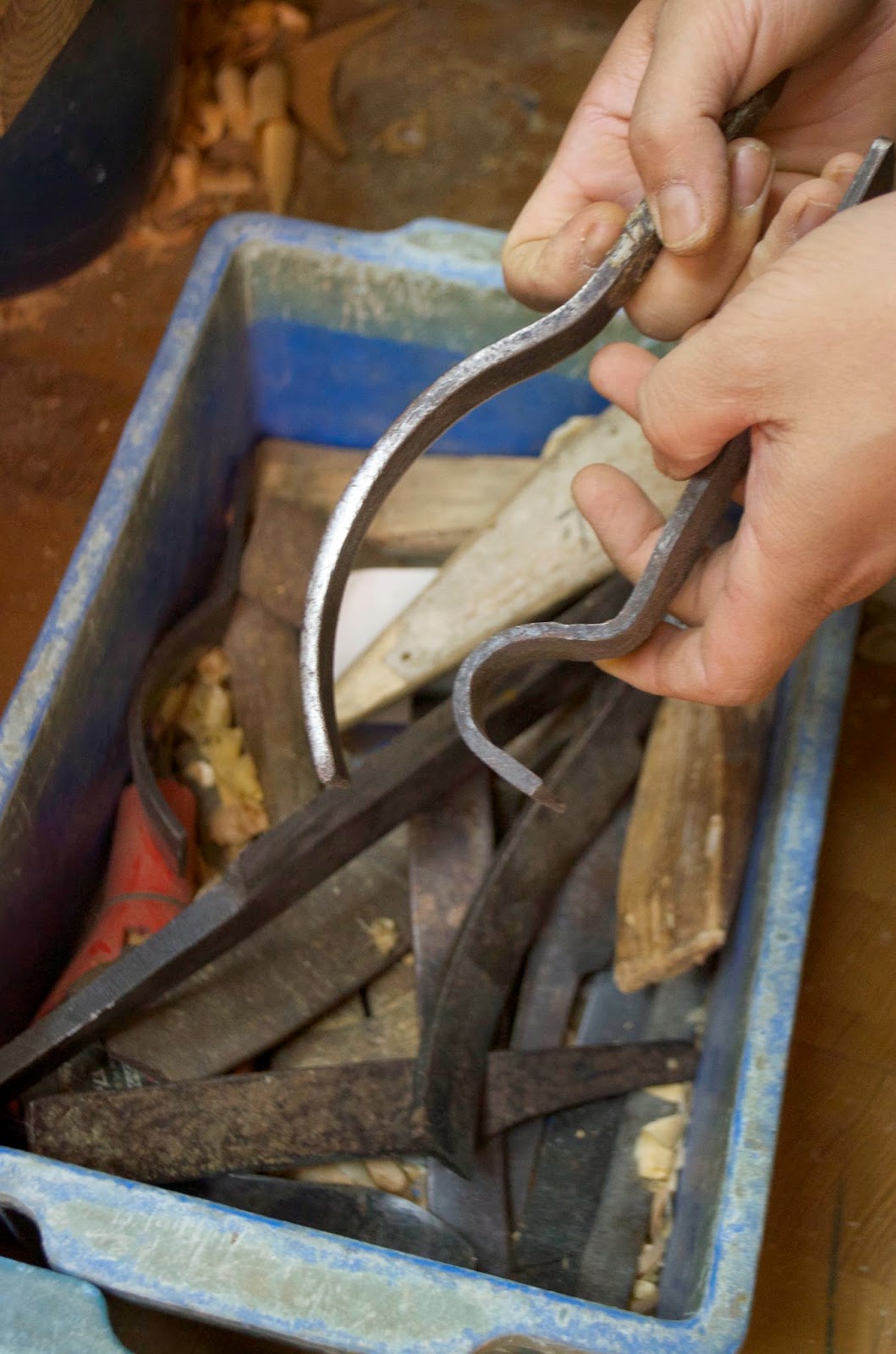 Various froes for splitting material into the curved staves. 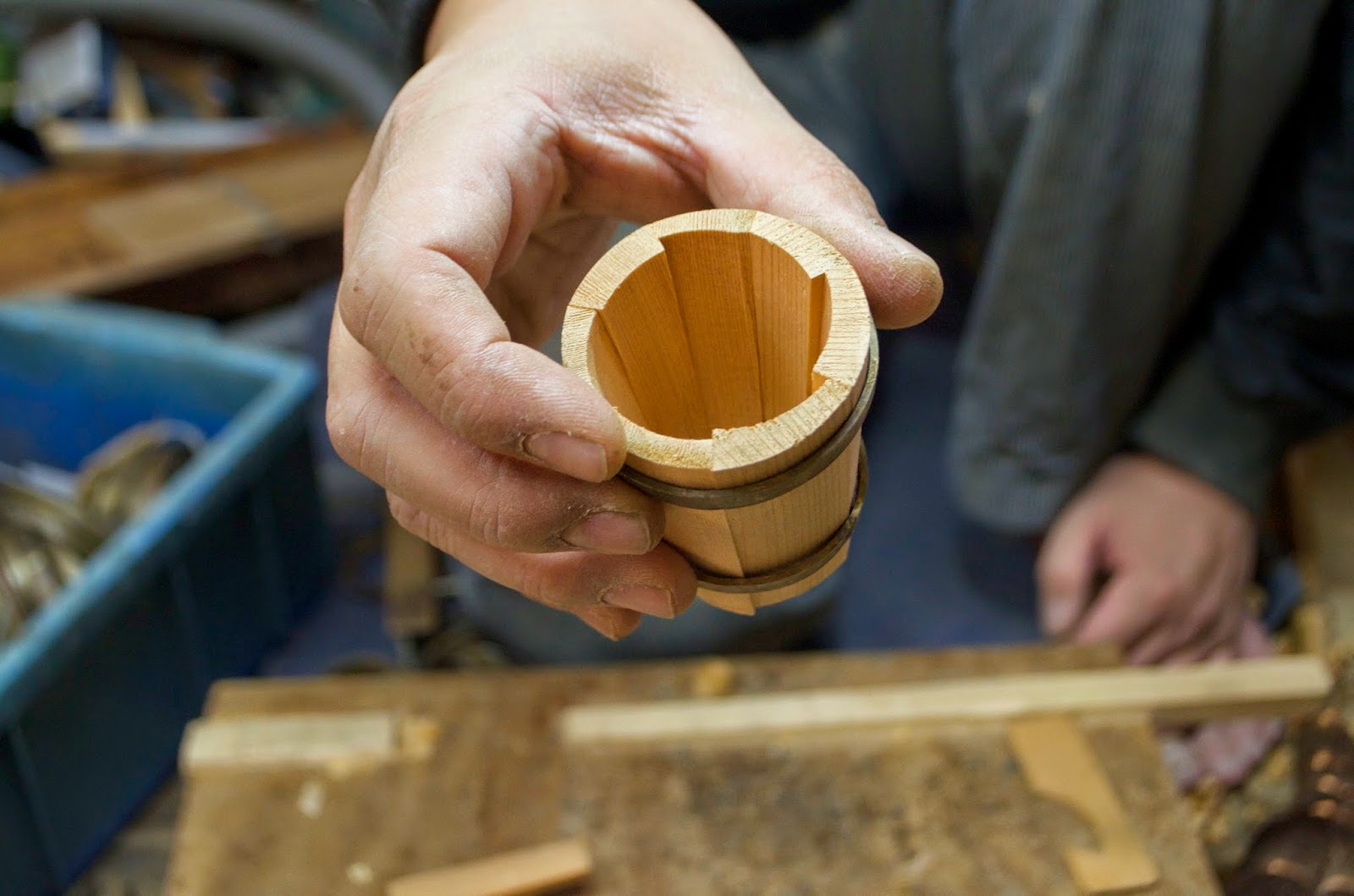 What a little sake cup/bucket looks like rough, held together temporarily with braised brass hoops. 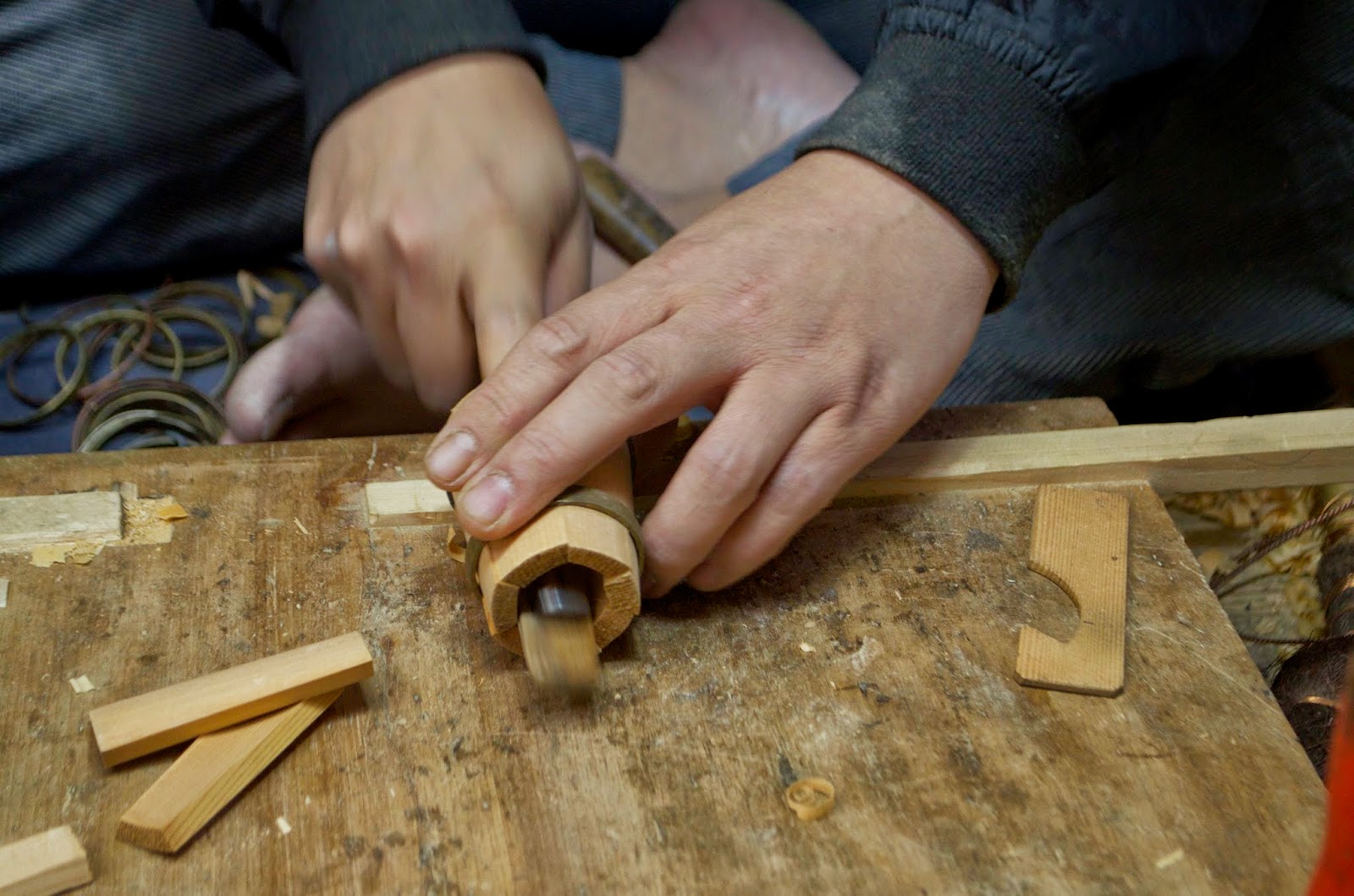 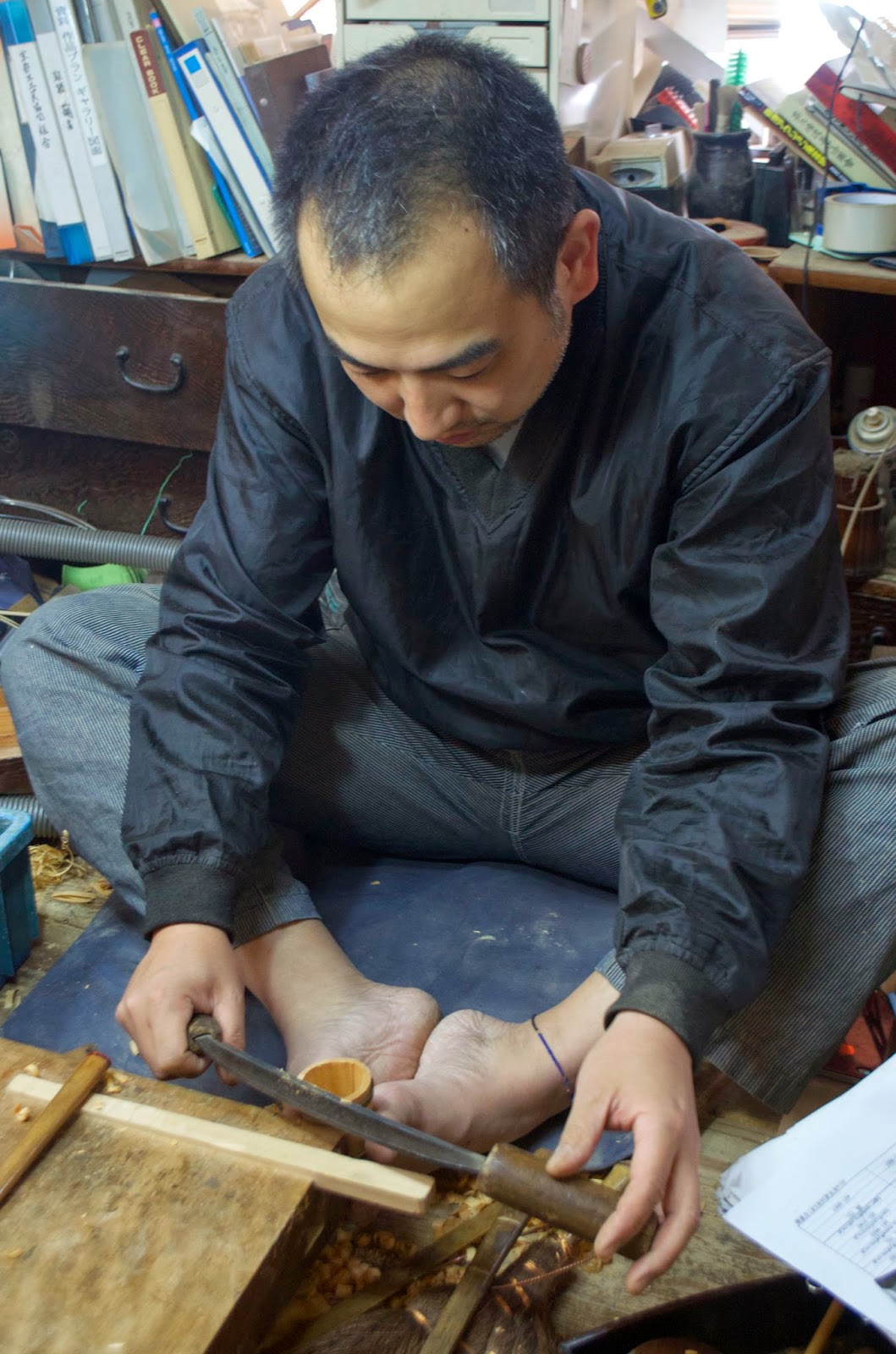 He trims the edges with a drawknife rather than a plane.  He said this works better because he can slide the blade sidewise for a slicing cut.  Note he holds the work with his feet. 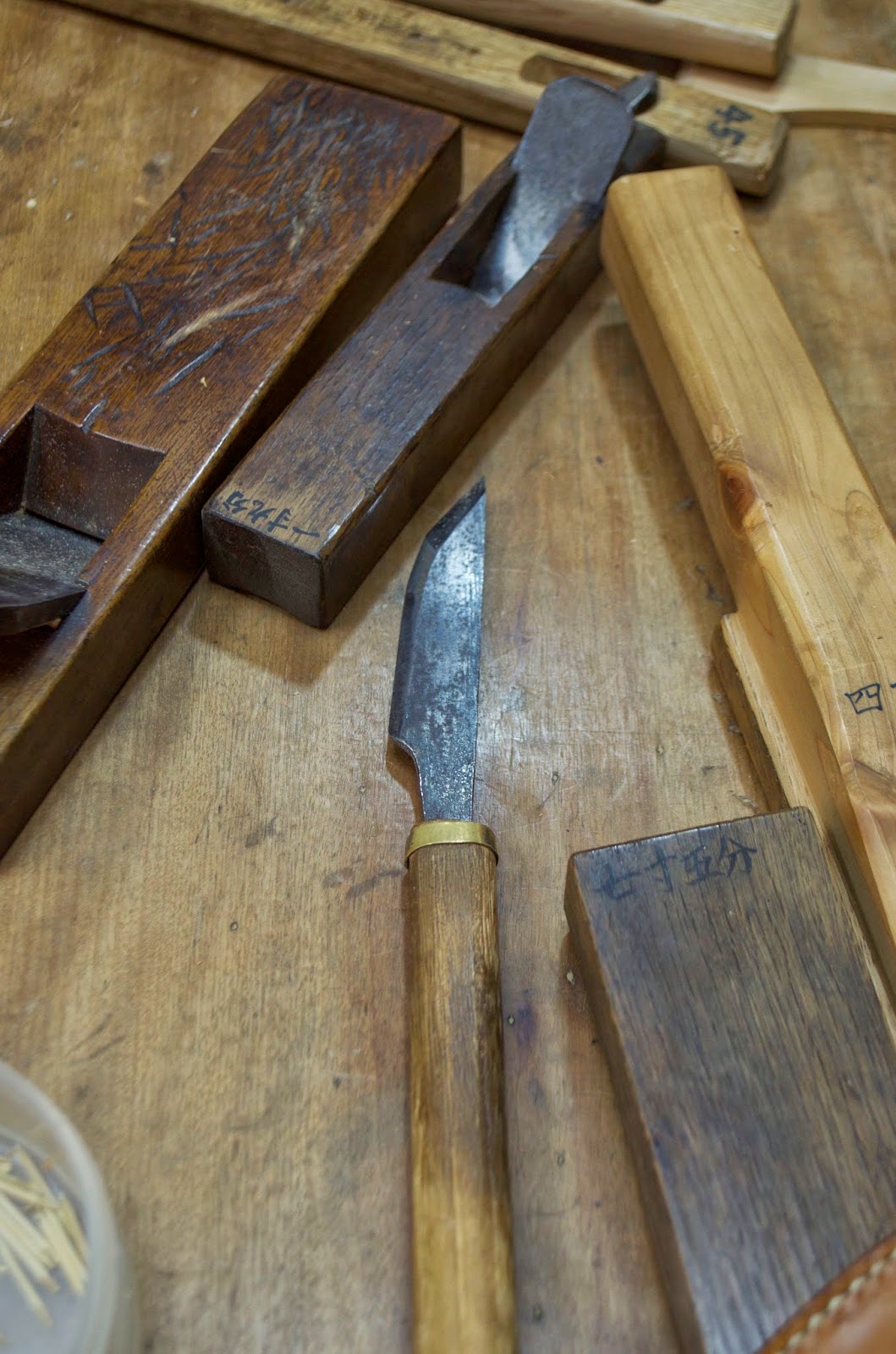 The yariganna is an ancient tool and the precursor of the Japanese plane. 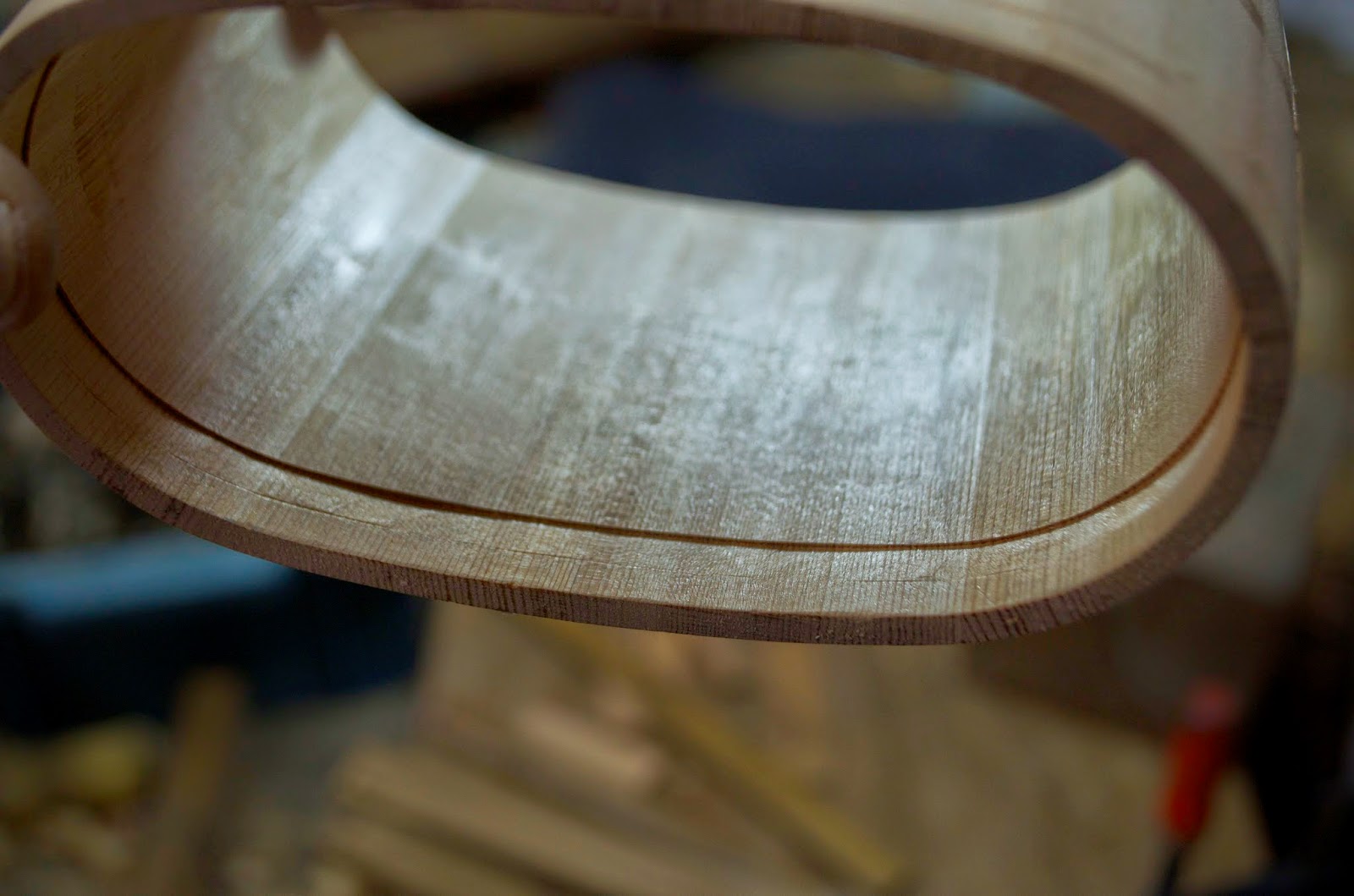 To cut a shallow rabbet for the bottoms he uses a marking gauge to make a kerf and then using the yariganna he makes a bevel cut.  He drive the bottom in from the top and it pops in place (if its sized correctly) into the rabbet.

Posted by Douglas Brooks at 8:48 PM