I spent yesterday talking to Tagami san about his life building boats, along with two researchers from the Tokyo area who are involved in documentation work on the hobikisen.  Then Tagami san's son, wife and my friend Tominaga san traveled to a smaller lake to measure a sappabune.  When we returned I was able to ask the elder Tagami about building these boats, getting some interesting background on them as well as details of their construction that I couldn't see. 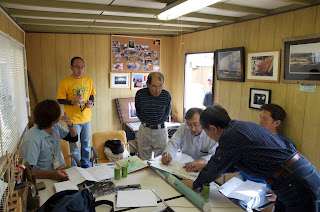 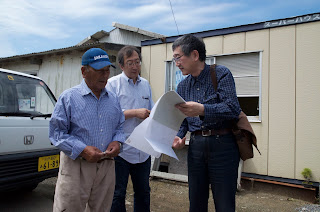 Professor Masaaki Kon of Kanazawa University, right, talking to a retired fisherman about the sailing rig of hobikisen.  Behind is an architect who is doing the drawings for Kon san. 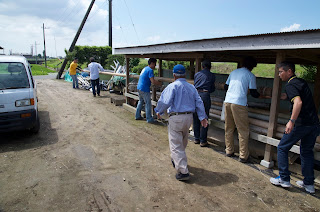 At the mast storage shed near the boatshop, pulling out one of the masts. 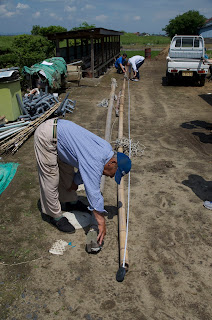 The masts for these boats are bamboo.  These boats unstep their masts every day so they need something light but strong.  The masts are 11.4 meters or about 37' 4" long.  The top yard consisted of two pieces of bamboo slipped together and reinforced with a wooden bar.  The yard was 15.25 meters or just over 50'.  The mast at the base is 15 cm diameter or about 5-1/2" in diameter.  The fisherman said the bamboo masts crack and only last about two years.  He said its become increasingly hard to find proper bamboo, but they do harvest it locally.  The massive sails are made of 20 vertical panels laced loosely together. 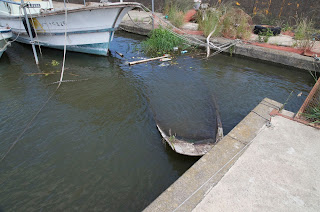 Later we drove to a smaller lake and a small harbor full of defunct boats.  This sappabune was sunk. 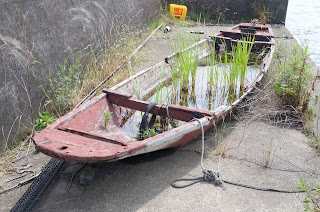 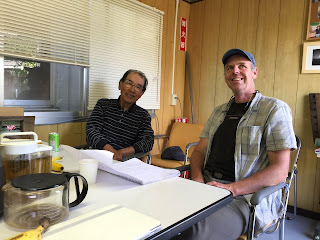 Later, Tagami san explained these boats were made in set lengths of 14, 16, 18, 20, 22, 23, and 25 shaku.  There were the most common small fishing boat of the region, and traces of their design can still be seen in some of the smaller tourist boats.  He also detailed for me the joinery where the bow and stern planking attaches to the bottom, something I couldn't see because the outside of this boat has been fiberglassed. (Photograph by Ms. Minako Tagami) 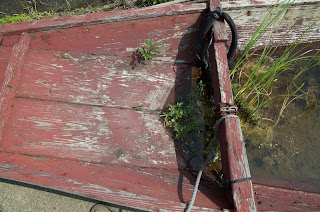 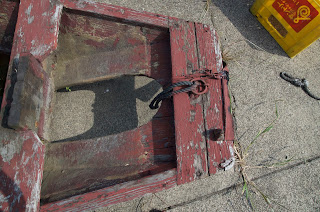 This boat was later adapted for an outboard motor, with a transom inserted in the stern and a hole cut in the hull aft. 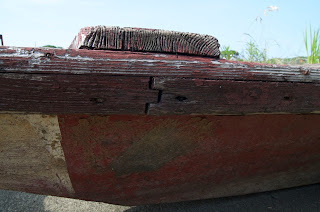 A common type of joinery used in the rub rails of Japanese boats. 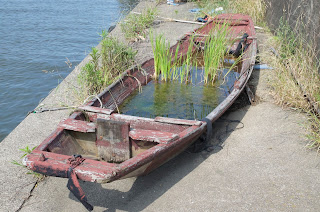 A view from the stern.  The small post visible on the aft deck is for a sculling oar. 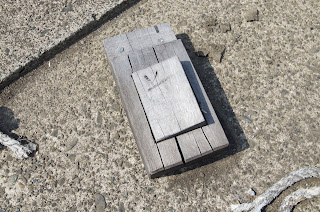 As we were leaving I noticed this sitting on the wharf, a funadana, or a Shinto shrine carried aboard a boat, set in the boat upon launch. 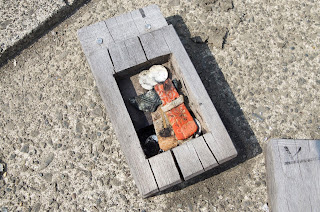 Inside were coins and two dolls depicting a man and a woman, along with seeds wrapped in paper, all common motifs for these onboard shrines.  My friends and I debated whether it was good luck or bad luck to take it.  Since I would like to build a sappabune I proposed giving it a new home aboard my boat. 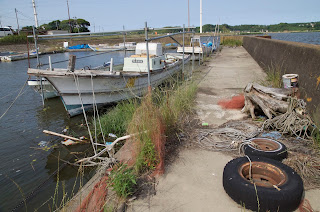 The harbor and its derelict boats. 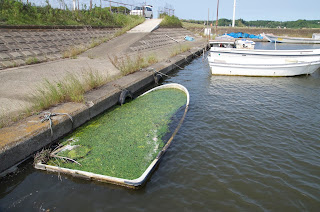 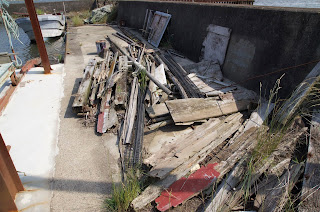 This looks like the remains of a hobikisen, and we theorized the funadana may have come from this boat. 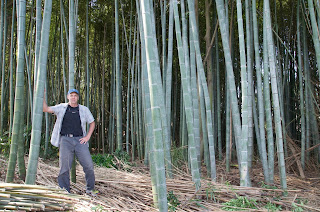 Me standing in a grove of mosodake.  You can get an idea of the size of mature timber bamboo. 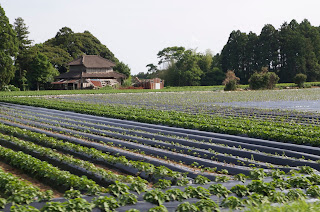 Away from the lake widely-spaced farms have quite a variety of vegetables under cultivation.  If you have ever flown into Narita Airport you probably noticed these islands of higher land set among the flat rice paddies.  We were up on this higher ground and it was just a beautiful setting.

Posted by Douglas Brooks at 7:11 PM