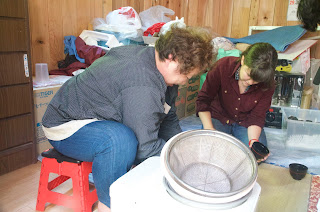 Mrs. Murakami got Angela right to work making mochi, or rice cakes, for both the ceremony and the after launch party. 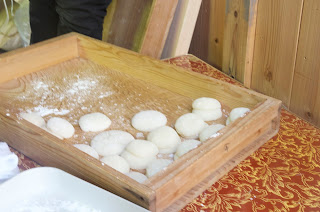 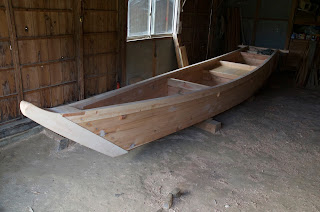 The boat in the shop. 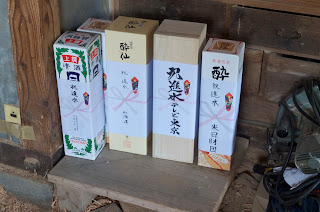 Gifts of sake (rice wine) for both our ceremony and celebrations. 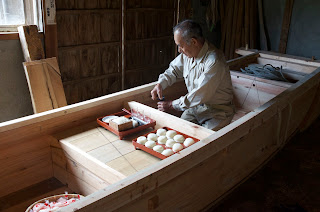 Mr. Murakami made three small piles on the main beam to port, starboard, and center.  At each he placed a small fish, some rice, and piece of konbu (kelp).  On one tray is mochi and on the other was a wooden box of rice, a dish of salt and a sliced radish.  The ceremony consisted of praying, then throwing salt forward, port, starboard and aft.  Finally he filled a small glass with sake and poured it on the three spots on the beam.  He then clapped twice and prayed before inviting me to do the same. Then Angela performed the same ceremony.  These are ritual purifications directly related to Shintoism. 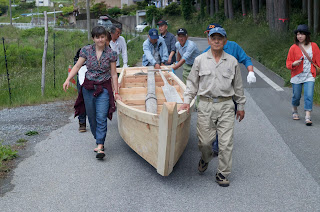 We used rollers to get the boat out of the shop and onto a cart with casters, then we began the walk down to the cove.  That's Angela on the left and Mr. Murakami on the right. 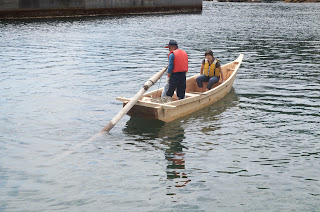 Angela getting her first ride in the boat and some coaching on using the sculling oar from one of the fishermen who came to the launch. 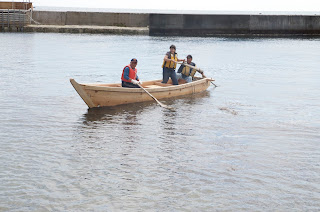 She'd gotten a bit of practice in Tokyo but made a lap of the harbor with a bit of assistance. 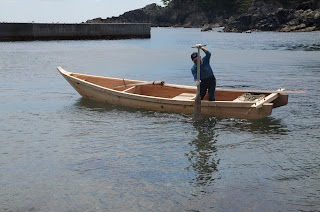 One fisherman demonstrated using the kai, which in these boats is VERY impressive.  Again, I hope to create a YouTube channel to showcase these kinds of techniques. 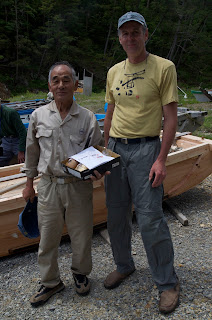 We had another drink at the cove and then Mr. Murakami and I posed for a photo.  He said later, "I give Mr. Brooks a grade of 95%, but I won't tell him what the 5% is."  Its an appropriately mysterious comment given the nature of Japanese apprenticeship.  As I've stated before, we did far too little on the boat to make even the slightest claim of having helped build it, but I suppose to Mr. Murakami for a first boat together our level of participation (cleaning and fetching) was absolutely appropriate.  I am happy to come back and do it again any time, though most of Mr. Murakami's potential customers are older than he is.  This market has effectively dried up, though Murakami worked later building wooden fishing boats than any other boatbuilder I have met. 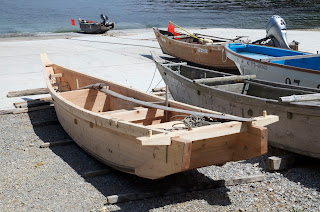 Last view of the completed boat.  I am posting this from Tokyo, here after an all-day drive from Tohoku.  I've got various boat-related things in the coming week so stay tuned.
Posted by Douglas Brooks at 5:22 AM