Rice field boats are usually called tabune, ta meaning rice field and bune meaning boat. In most of Japan tabune are not much more than small sleds for pulling through the mud.  In keeping with the rice field environment, a local name here for these boats was zuta tenma, zuta meaning crawling and tenma the generic name throughout Japan for a small work boat.  In Himi, however, huge areas of rice fields were cultivated and these were connected by a large network of canals and rivers.  A number of boat types developed to serve the farmers.  I am building what was the smallest of these boats. The largest were about 25-feet long. 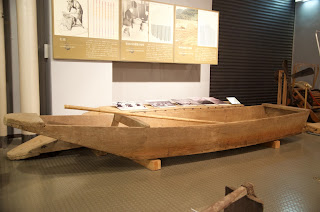 Here's the boat I am replicating, on display in the Himi Museum.  It was built sometime between 1960 and 1975. 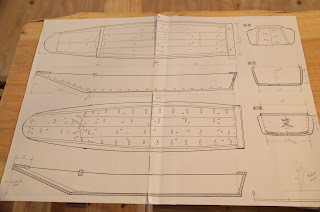 The museum published a set of drawings of it. 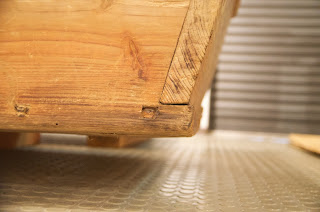 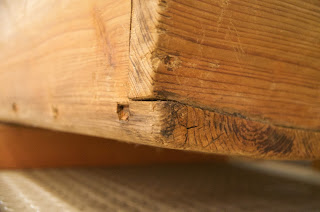 A view from astern.  The side plank is basically notched to receive the transom.  That's the side to the left and transom to the right. 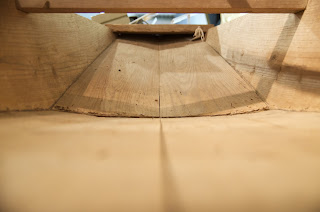 A look at the pram-type bow, which is peaked. 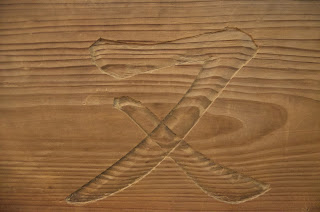 A large carving, or house name, on the transom. 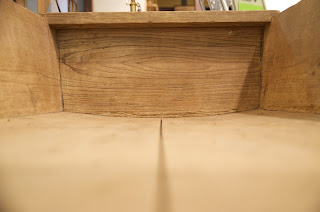 A look astern shows the bottom is not flat but slightly curved. 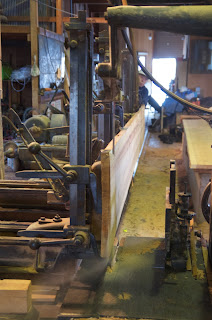 A local sawyer was able to skin about an 1/8" off my planking stock to get it the right thickness. 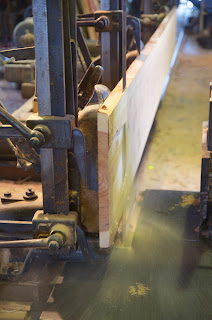 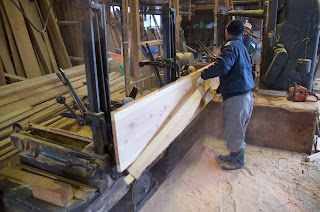 Bansho san, the local boatbuilder, has helped supply materials.  When I met him two years ago he insisted local boatbuilders either made sea boats or rice field boats but not both.  The transom arrangement was one piece of evidence he pointed to.  He said sea boatbuilders were superior, which may explain why he wasn't interested in building this boat.  I was completely surprised when Himming asked me to come, given Bansho san's presence, but he's been an enthusiastic supporter and I like forward to getting to know him better while we are here.  At seventy, he may be Japan's youngest boatbuilder.  I suspect some of the details of this boat will be a bit tricky, such as fitting and edge-nailing the peaked bow.

And here is a stark image from the Himi Museum, giving pause to the phrase "the good old days."  Next time I am there I will ask the curator the date of this photo.  Readers of this blog are welcome to take a guess but I am willing to bet this was taken within many of our lifetimes.