It's always boats and something with me, because there are so many other things in Japan that interest me.  Today I took up a local businessman on an invitation to tour his soy sauce plant.  He's working now largely alone at a very old family business.  But since the name of this blog contains the word "boatbuilding" I'd better start there.

Today I did the final fitting of the side planks to the bottom.  This is the fourth pram-type Japanese boat I've been involved in building (two with students at Middlebury College), and getting a fair curve at the intersection of the bottom and bow is turning out to be fairly tricky.  What would surprise readers is how fast the saw method works at fairing things. 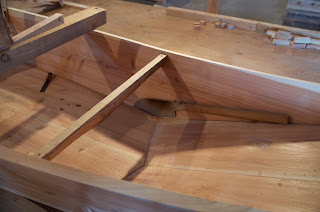 I had some large gaps to start today. 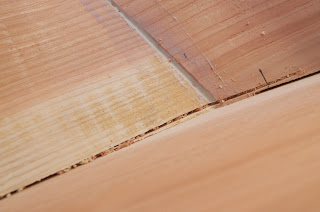 But one of the big difficulties is having the saw cut out of the seam, as seen here.  Whenever the two planks are propped together very tight this is a big risk.  I've made this mistake, my students have made this mistake and even my teachers made this mistake.  Also as you transition to another piece of wood the grain direction can change and "catch" the saw and pull it out of the seam.  I got fooled here because I'd let the sawdust pile up where I was sawing and didn't see my cut wander. 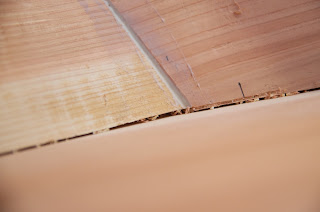 But one careful pass later, in the opposite direction, and the cut out is nearly gone. 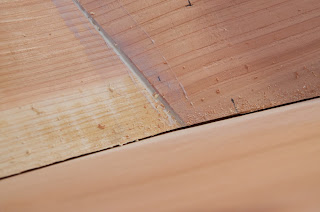 Two more passes and its fixed. 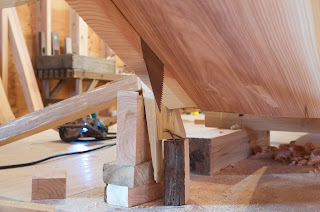 Here's a shot from underneath the bow showing the saw blade coming through between the planks.  Note the creative use of blocks, wedges and props to push the side planking in. 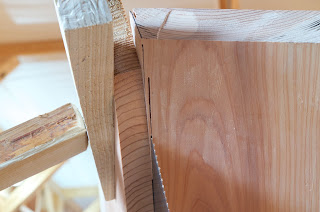 Did it again, this time underneath the bow at the forward end of the boat. 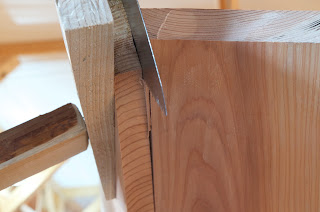 I carefully sawed in the other direction... 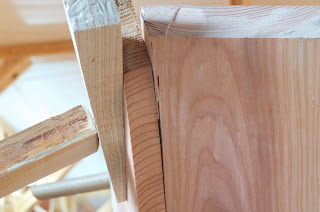 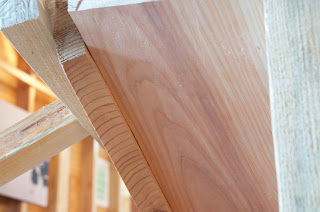 Fixed!
One thing about this method is one can remove a sizable amount of material.  I've probably narrowed the bow nearly a half inch from my original layout.  I remember lofting one of my teachers boats and he and I arguing over some dimensions.  I was lofting the boat as built and he was quoting his original dimensions.  We finally went and measured the boat and he was very surprised to find how much it had changed in the course of construction and fitting. 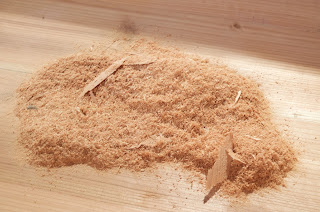 This was all in all about a half day's work.  It was a sizable pile of sawdust inside and outside the boat.  The large shavings are my mistakes getting sawn out of the seam. 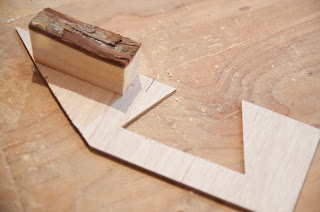 And here's my handy-dandy little gauge for marking the nail locations for the side planking.  The two  back edges are parallel but offset 6 bu, half the thickness of the bottom planking.  The block of wood ensures it lays square to the bottom. 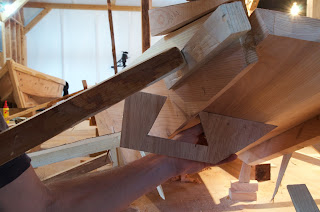 When I hold it tight to the bottom the point marks where the nail will go and enter the middle of the bottom planking.  This is not rocket science but I've never seen a Japanese boatbuilder use anything like this.  Instead my teachers have done a very cumbersome layout/transfer to mark nail locations.  I showed my second teacher this tool and he instantly understood it and was thrilled.  I did it again two years later with my third teacher and got a very different reaction.  For him, apprentices were not expected to offer any bright ideas to their masters. 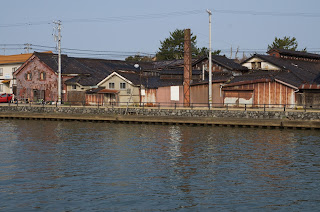 At lunch we pedaled over to the soy sauce factory across the river.  Some locals were guessing the place is either seven or nine ancient buildings all connected. 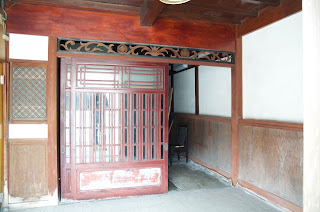 We entered through the old Horino Family home. 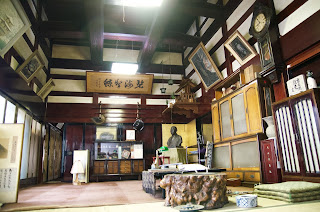 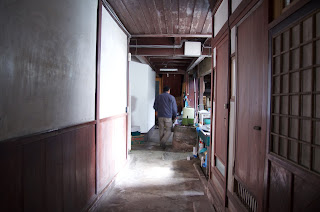 Then down a long hallway past many other rooms and alcoves... 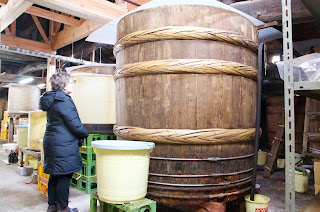 ...to the factory itself, and about half a dozen wooden barrels like these storing fermenting soy sauce. 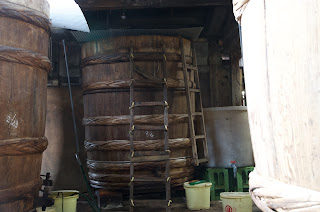 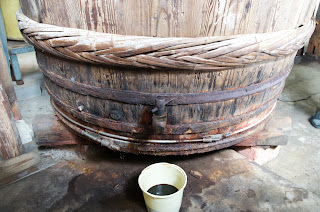 The braided bamboo hoop is traditional.  But these need periodic replacement and there are no craftsmen left that do this work, so iron bands have put on this barrel, and later a threaded rod.  The owner was explaining the process to us, how the sauce is heated to certain temperatures, but then he added, those exact temperatures are his secrets. 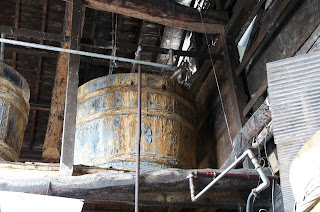 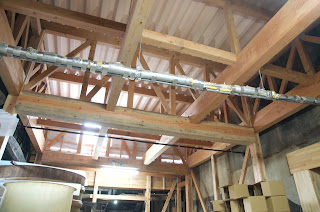 This new timber framing looks like some cool, modern architectural element within the old building, but in fact last year this section of roof caved in and was repaired. 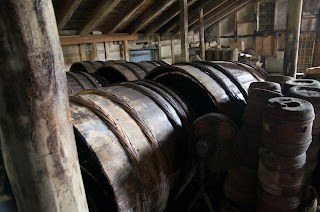 The owner explained that Japan's last maker of large barrels like these retired last year.  I met him a couple of times and blogged about him here.  He told me three years ago he was planning on retiring and he knew it was going to put his customers in a tricky situation.  Horino san insists on making soy sauce in wood as opposed to stainless steel.  He believes his soy sauce incorporates local flavors impossible to replicate any other way.  He keeps this inventory of old barrels in case he needs to restore them someday for use. 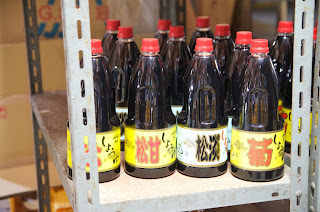 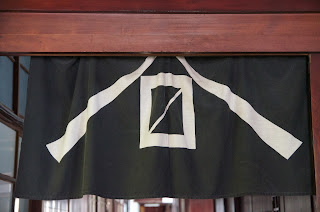 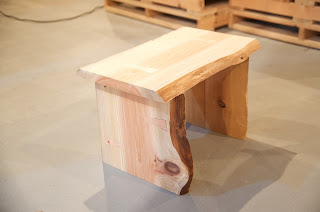 Today Catherine finished her bench.  She took two five-foot long planks and joined their edges with boatbuilding saws, then fastened them with a combination of boat nails and dovetail keys.  She then cut the two ends and attached them as legs.  She thinks is could be a prototype for a boatbuilding-themed workshop.

Posted by Douglas Brooks at 3:30 AM