I've been sorry I haven't had more time to spend with the local boatbuilder, Bansho san, but last night we had a chance to have dinner and make a dent in a bottle of sake.  I told him I really hoped to see the local museum storage, where I'd been told various interesting boats were stored.  Sure enough, Bansho san called me at work today to say he'd arranged a visit and would drive me there. 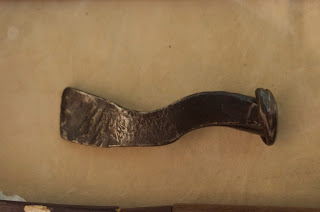 Bansho san is a third generation boatbuilder.  Most of his grandfather's tools are in the local museum, including this caulking iron.  I blogged a bit about Bansho san here two years ago when I first met him 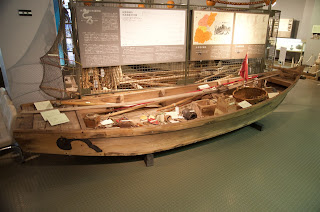 One of this father's boats, in the local museum. 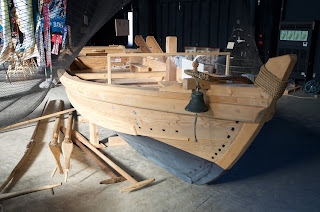 Over drinks last night I got to hear more about his life and work.  At twenty-five he left Himi and studied fiberglass boatbuilding.  He's seventy now, so his was the generation that switched from wood to fiberglass. 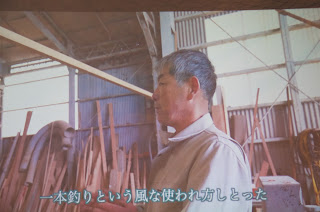 In retirement he's built most of his wooden boats, first for Himming NPO as well as some other customers.  These shots I took of a video about the construction of his largest replica. 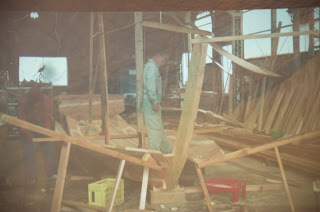 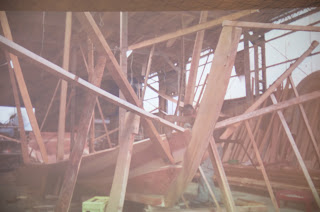 Readers of my work will be familiar with the Japanese boatbuilders' use of props in lieu of clamps.  Bansho san may take the cake in this department. 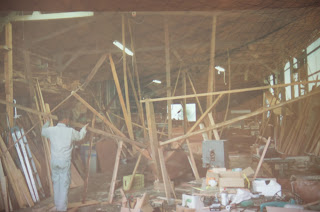 Its worth a close look.  Props against props. 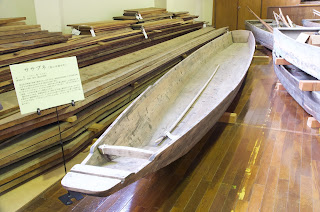 Off to museum storage, where the first boat was this exquisite river boat from Toyama City.  There was also a stack of side planks, eight pairs in all, partially hollowed.  The side planks are left about 1-1/2" thick where they join the bottom and ends, and are hollowed down to about 7/8" elsewhere.  The edge of the hollow is faired beautifully into the bottom and the whole assembly is held together with dovetail keys and nails.  All in all its pretty magical. 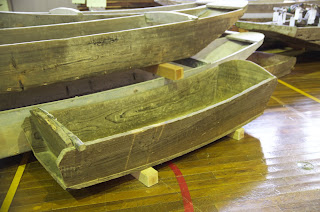 A typical rice field boat, or more properly, a sled.  The beam on the left extends out past the sides to create handles for pushing. 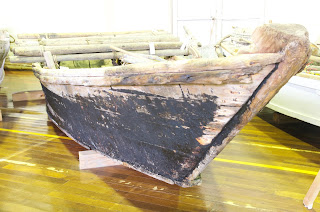 A fishing boat that drifted over from North Korea, found offshore with a body inside.  Recently there has been a spike in such drifters found on the Japan Sea coast. 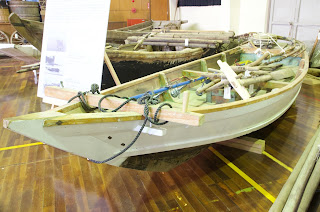 A gorgeous small boat from the west side of the Noto Hanto Peninsula.  The sharply raked stem gives it a lovely shape. 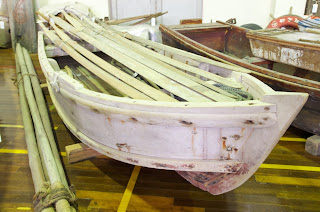 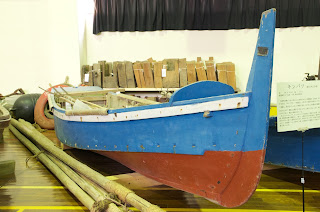 A bizarre boat from a town in Toyama on the border with Niigata. 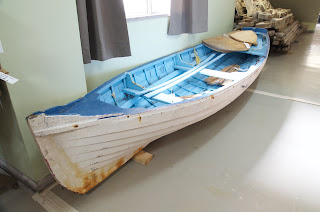 Right after the War Bansho san's father got commissions to build lapstrake whitehalls for a local rental fleet.  This is the third time I've seen this in Japan. 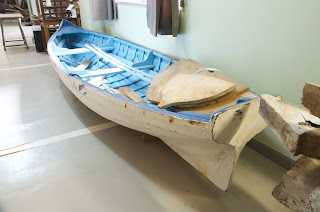 The molds are sitting in the boat.  Its quite narrow.  The curator was glad to have me give him the English names for the various parts. 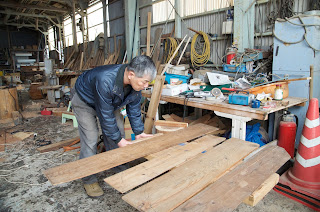 On the ride home Bansho san talked about his father's and grandfather's plank drawings.  He got them out for me to see. 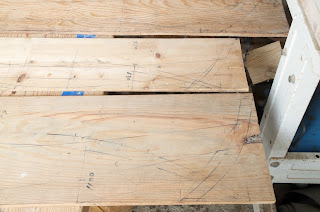 This is a sixteen foot boat.  All such drawings are 1/10th scale. 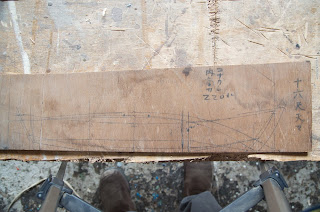 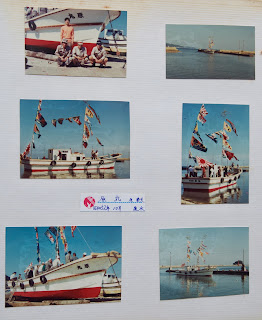 But Bansho san spent his career building fiberglass fishing boats.  His scrapbook shows the launching of a large one. 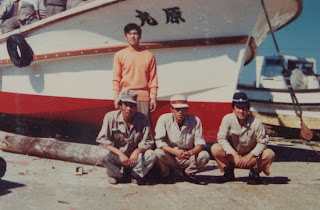 Bansho san is standing.  His brothers are with him.  They worked at boatbuilding for awhile but went off to other jobs.  He said his father was a strict teacher.  Bansho san couldn't be a more kind and welcoming person.  A remarkable craftsman and I would love to be part of a project with him.

Posted by Douglas Brooks at 3:38 AM