It's hard to believe but the last boat photo here shows what our boat looks like after just eight days of work.  Tokyo Television asked him how it could be built so quickly and he answered, "Well, there are three people working on it."  That is incredibly generous of him (or maybe he was being a bit sarcastic) because all I have done is rough cutting and planing (with power tools) and a little bit of finish work.  Murakami san also has me drive and set nails when his arm gets tired.  Angela and I keep cleaning the shop and fetching his tools, and on this day I invited her to join me in debarking some hinoki with an axe when Murakami san asked me to do it.  But really 95% of the work is his.

Today, Sunday, we had a day off and visited a house and tool museum.  I'll write a separate blog post about those adventures. 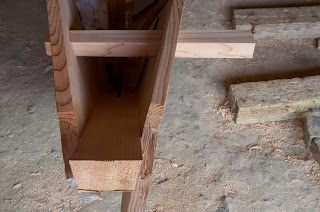 Our forward beam, called a kanugi, is tapered slightly and driven tight through the hull, then wedged in the narrower tenon to fix it in place. 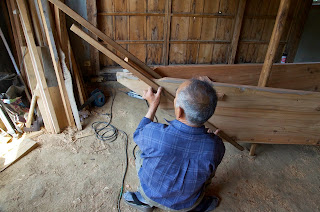 Murakami san uses these two straight sticks to sight where the plank ends at the face of the stem.  I only just realized this boat is being built with a two-piece stem (sometimes called a false stem).  Murakami is the first boatbuilder I have seen do this in Japan. 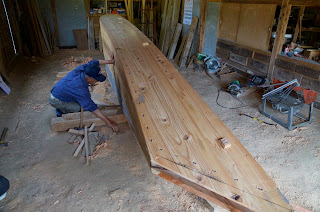 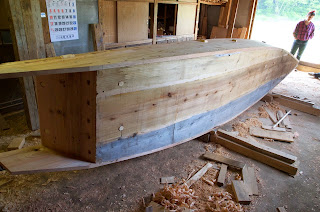 We rolled the boat on its side in order to nail through the bottom and into our three bulkheads. 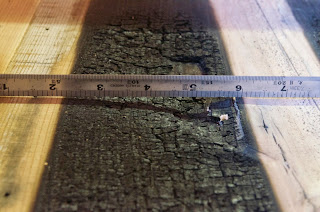 This shows how deep the bottom is charred by the fire bending.  We covered the bottom seams with battens to protect them from burning, but a fair amount of the bottom aft is charred. 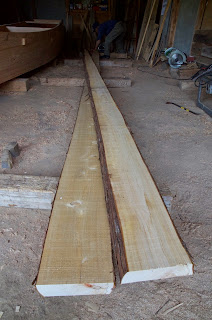 Two hinoki planks, cut from the same log, will be our rubrails. 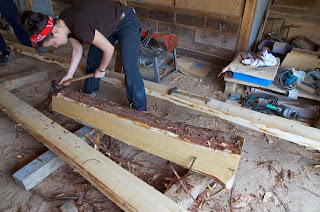 Angela using an axe to take the bark off the base of the same hinoki, which will be our outer stem.  Please follow her blog: angelarobins.com/blog 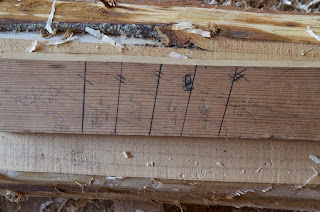 Murakami's bevel board for the rabbet in the rubrail. 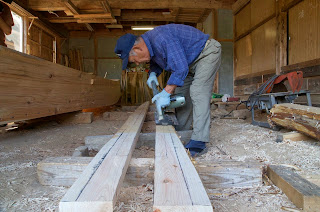 As he advanced his cut he changed the bevel accordingly. 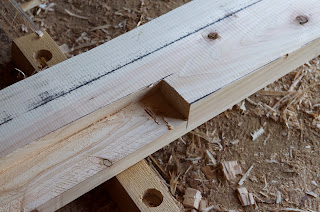 The rabbet ends short of the bow. 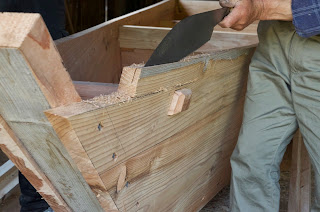 Murakami makes a cutout in the planking to receive the rubrail.  In the West we would cut a gain to allow a plank to overlap another and lie flush at the bow and stern.  This is an alternate method. 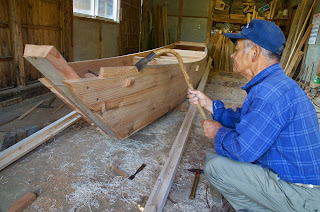 Amazingly he used an adze to work this small detail.  We actually both wondered if he was showing off but there's no need for that; he's impressed me already. 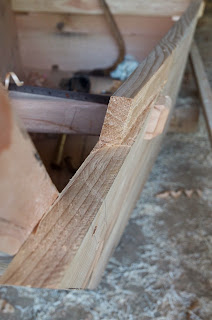 A slight gain is visible but really this is a completely different method to achieve the same result. 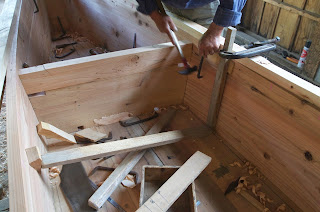 Note the use of prop and wedge to hold the upright timber so he can clamp the rail. 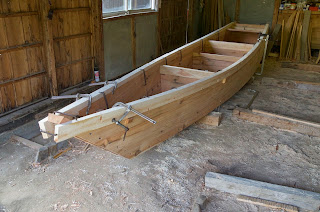 Day Eight is a wrap! 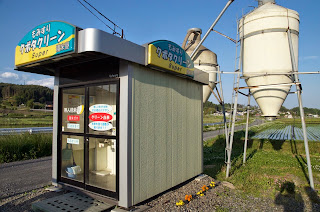 Quiz question for readers: What is this for?  Answer below. 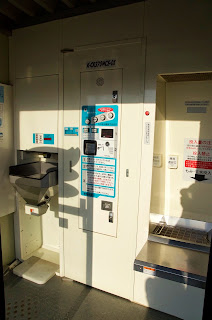 Posted by Douglas Brooks at 5:04 AM