完成 - Kansei, Word of the Day

Kansei means "completion," and it is what Murakami san quietly said to us after lunch.  The boat was done, eleven-and-a-half days after starting.  Tomorrow Mrs. Murakami has offered to show us around the neighborhood and we have to start arranging our departure.  Saturday late afternoon Murkami san is hosting a party for us at our inn and Sunday morning is our launching.  I am sure all of the above will deserve one or more blog posts so stay tuned.

There is an expectation that Angela and I will take to the sea in this boat, and while I am familiar with using the sculling oar I was not at all sure how they used the kai, or paddle, in this region.  As luck would have it we walked down to the cove at lunch just as a fisherman was launching his boat.  His motor promptly quit and so he used his paddle to get back in and we watched and got our first lesson.  I am not going to try and describe it but it again makes me want to put together a YouTube channel to share some of the visuals. 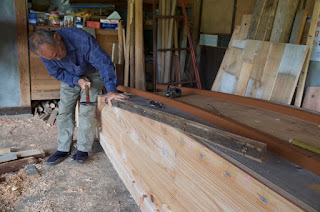 Murakami san nailing on the kaizure, a hardwood pad to protect the chine where the paddle can rub against it.  The wood is nara, a type of oak he said he left buried in the mud for a year to keep it flexible.  Maybe he meant since last year...  On the hull are two strips of hard plastic which he fastened as rubbing strips.  These boats are hauled out every day and these days plastic is used to provide a slippery surface and protect the bottom. 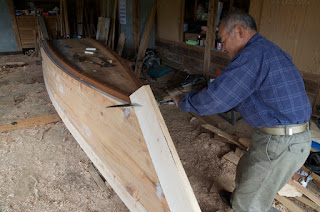 Cutting off the base of the stem. 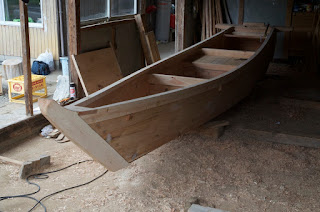 Except for some small details, the boat is finished.  Murakami san told us sometimes fishermen would take their boats unfinished in order to work and raise some capital. 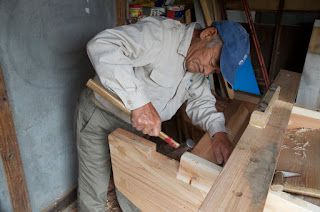 Murakami san pounding the edges of the notch where the toko fits.  This large beam at the stern is used for hauling boats out of the water.  Note the block through bolted on top of the toko.  This is an outboard motor bracket.  The beam is walnut. 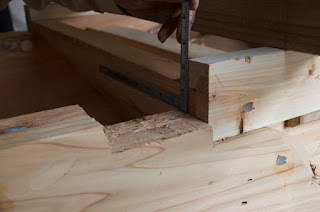 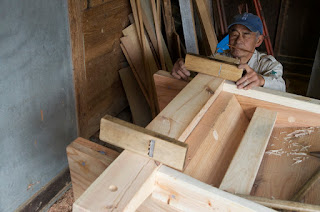 Murakami san said we'd be launching and using the ro, or sculling oar, so he made a second temporary toko for this purpose.  Here he is checking it for flatness using two of his planes.  Its made of pine and has a hardwood pin the sculling oar will pivot on. 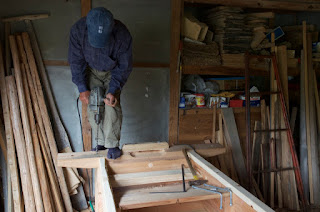 Drilling for the toko final fastening, a pair of L-shaped bolts visible on the aft deck. 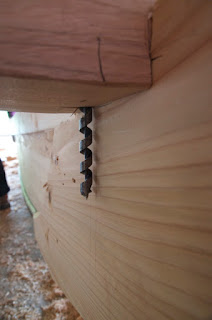 He sighted by eye and drilled a perfect hole that lay just against the planking.  I told him it was very skillful and Angela translated his response to me: "You are one of the few who could appreciate it."  Angela's facility with the local dialect has been a huge help in this project.  As I mentioned earlier she was born here so she learned the language (and the dialect) as a child.  Because of her I've been able to understand so much more of what people have been saying. 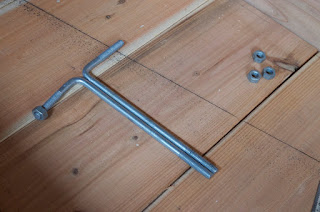 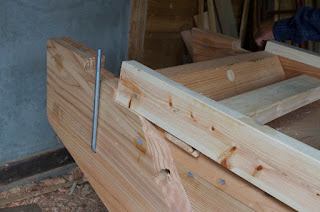 The toko drops down into notches and onto these L-shaped bolts. 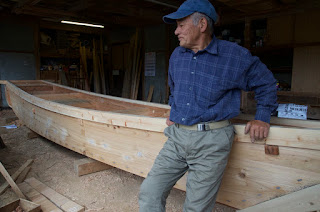 Posted by Douglas Brooks at 2:19 AM