Anyone who has read this blog may have read where I talk about suriawase, the process Japanese boatbuilders use to fit parts of the boat together.  This involves running a series of saws through the seam, using a very specific motion, to "reconcile" (one of the meanings of the word) the two edges and make a tight fit.  Yesterday we watched as Murakami san laid the two halves of his planking on the horses and then reach for his circular saw and begin adjusting the depth of cut.  I asked him, amazed, if he was getting ready to do suriawase and he chuckled and said, "Yeah."

One thing that is abundantly clear about Murakami san is he has refined the process to make boats as quickly as possible.  When I asked him how long he'd been fitting planks this way he said since the 1960s.  Angela pointed out this was the same time he said he'd gotten electricity.  Clearly the introduction of power tools spurred him to maximize their usage, even at the expense of traditional methods.  Either way, this project has already been an amazing window on a craftsman's ingenuity. 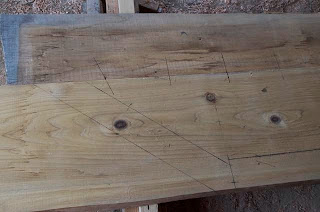 Layout of the bow on the side planking. 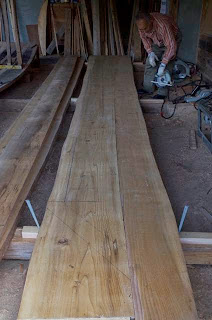 The two parts of our plank wedged together with nails. 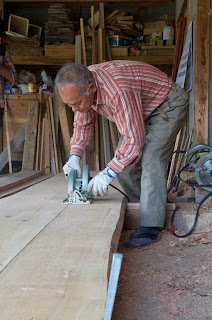 Murakami san very carefully running the saw down the seam between the planks. 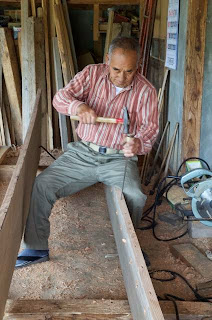 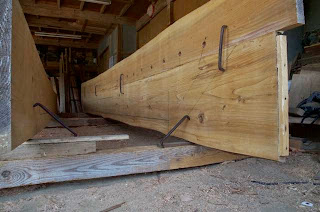 One plank assembled, glued and nailed together. 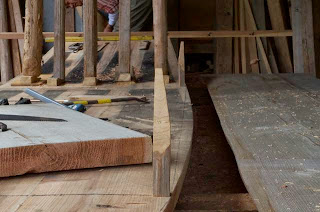 To check to make sure the stern has been bent up enough, he sets two posts, seven sun long, on the keel and sights their tops with the back of the bottom. 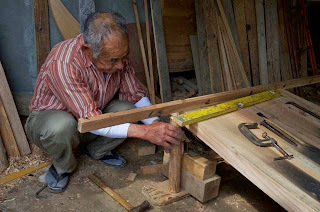 Making the final adjustments at the stern.  He keeps specific props for this purpose. 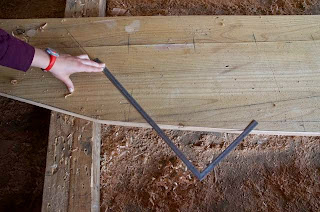 Layout of the transom angle, aligning the square along the bottom edge of the plank aft so the two seven sun marks touch the plank edge. 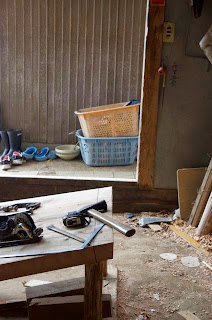 View at the stern looking across the boat.  If you enlarge this photo you will see an angled line drawn on the wall just below the electrical outlet.  Murakami san told me to cut the end of the planking (which runs past the transom) he will sight from this point, holding his square against the boat until it aligns with the line drawn on the wall, then mark the resulting angle on the boat. 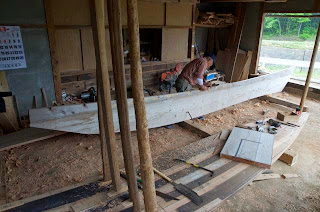