Japan-Boatbuilding in the Tsunami Zone

I have just arrived in Japan and will be headed north this evening to Iwate Prefecture, where I will be building a traditional boat with Mr. Hiroshi Murakami, perhaps the last active boatbuilder of the region.  This project is funded by the Asian Cultural Council and the US-Japan Foundation, both of New York.  The fiscal agent is the Henry Sheldon Museum of Vermont History.

Mr. Murakami spent his career building small fishing boats called isobune ("inshore boat").  The introduction of fiberglass boats put him out of business in the early 2000s but ironically, the 2011 tsunami, which destroyed up to 95% of the local boats, put him back in business.  Since the disaster he has built a dozen boats, and has told me this one will be his last.

I am joined on this project by Ms. Angela Robins.  She is a boatbuilding instructor at Urban Boatbuilders and a bowl turner in Minneapolis.  She was born in a fishing village in the region where her parents were working as English teachers.

We begin working with Mr. Murakami this Friday the 15th of May.  Mr. Murakami says it will take 3-4 weeks to build the isobune, a process we will document with drawings, notes, and photographs.  It is our hope to put together a publication detailing how these boats are designed and built.  Keep an eye on this blog to watch our progress. 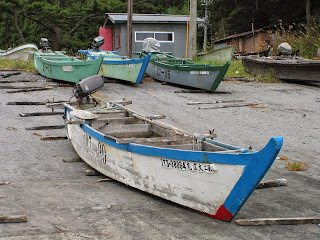 Isobune I photographed in 2005, just down the road from Murakami's shop.  All these boats were destroyed in the tsunami in 2011. 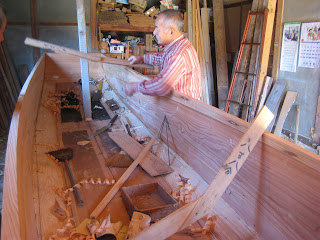 Mr. Murakami in his shop, photographed by Angela Robins in 2012.  In the foreground is one of his patterns for setting the plank angle.

Posted by Douglas Brooks at 2:22 PM