Hard to believe our most recent day off was just three days ago.  The project will wrap up tomorrow as far as building the boat is concerned, then we have a launching on Sunday.  Tonight I will go back in time to last Sunday and our day poking around, getting lost finding a historic home and tool museum, finding an overlook instead, then finding the museum, and finally looking at a famous local temple. 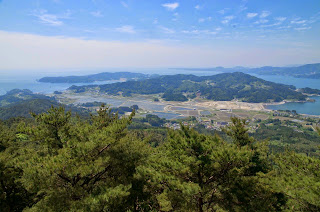 The mountains immediately inland from us are about 1200 feet high, and this is the view from the top of one of them.  It is looking out over the Karakuwa Peninsula and Murakami's house and shop is at the point of land visible on the left.  That large swath of earth is tsunami reconstruction, some kind of seawall, I think.  I plan a later post on the tsunami's aftermath. 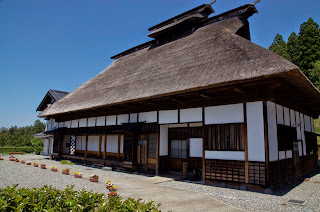 This thatched-roofed house was built twenty years ago as a museum.  It reflects the local style for a very wealthy farmer's house. 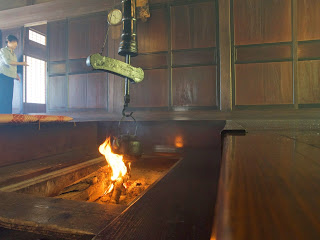 Inside they have a wood fire going... 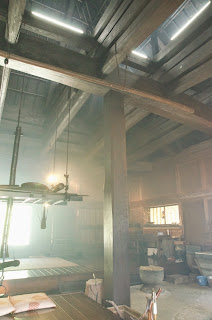 ... which fills the kitchen area with smoke, but this is important because it keeps bugs out of the thatch, keeps it dry (to prevent rot) and keeps the lashings holding it tight.  But you really can't stay in this space for long. The rest of the house is cut off from the smoke by ceilings. 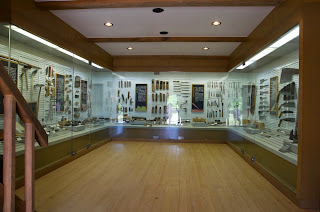 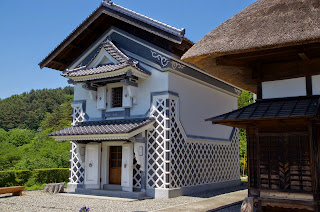 ... which is housed in this magnificent kura, or fireproof storehouse.  This one is built in very high style.  Normally the presence of kura indicates a wealthy region (because people had enough valuables to be worth protecting) and we have seen a lot of kura in this area, built in many different styles. 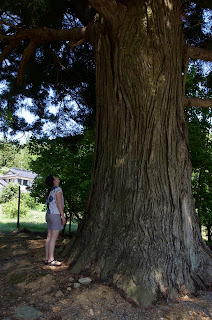 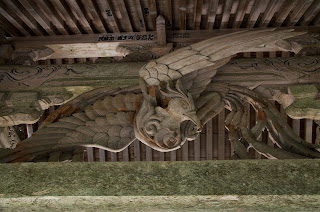 This carving over the gate was about six feet wide. 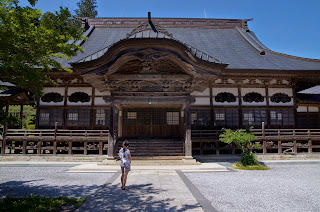 The temple itself.  Behind was a large cemetery along with a formal garden. 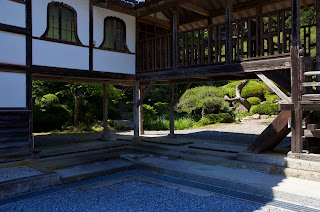 I loved the way the bridge to this outbuilding frames the garden. 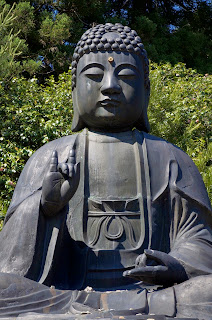 This statue stands next to the temple and is about ten feet tall. 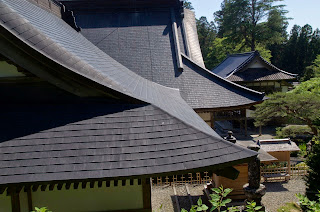 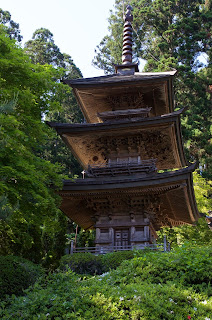 The pagoda was quite small, actually, but of course featured phenomenal workmanship. 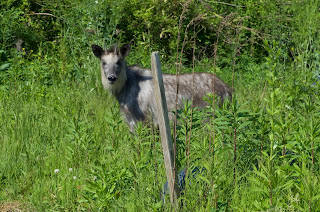 On the way home we saw a kamoshika, a type of mountain goat, or serow?  Its the second one we've seen and they are not that spooked by people.  About the size of a deer. 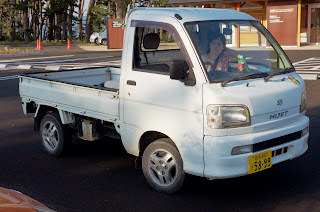 Our ride, Murakami's mini-truck.  I can just barely squeeze in behind the wheel and its rated to carry a whopping 800 pounds.  Not exactly the macho pickup of home, but gas gauge needle has barely moved in two weeks.

Posted by Douglas Brooks at 4:58 AM