Again, veteran readers of this blog will have read the term kigoroshi before.  Literally, “killing the wood” it refers to Japanese boatbuilders’ practice of hammering the faying surfaces (the surfaces that meet one another) of planks before joining them.  The idea is to compress the wood fibers prior to fastening, and once the boat hits the water and those wood fibers spring back the seam will become tighter still.

Murakami san uses this technique to a degree I’ve not seen anywhere else in Japan.  He claims its enough, along with putting glue in the seams, to ensure that the boat will be watertight.

Some shots here as well of his use of the axe.  It is his go-to tool for rouging out wood, but he cuts confidently to within 1/8th of an inch of his line.  Here in the north the axe, normally called the ono in Japanese, is called the masakari.

And, I don't know if anyone is counting, but this is just Day Four and it sure looks like a boat! 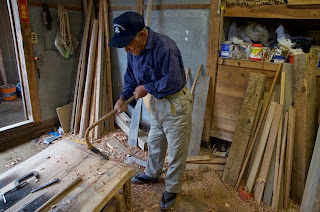 Roughing out the keel plank aft with an adze. 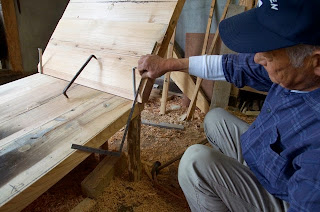 Murakami san checking the angle of the transom. 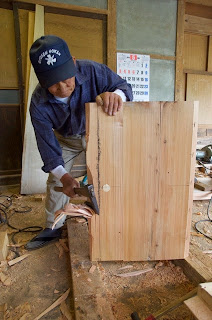 Beveling the top of the transom. 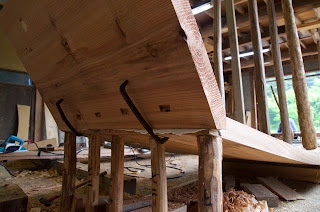 Transom glued and nailed in place.  We use the dogs to clamp just about everything. 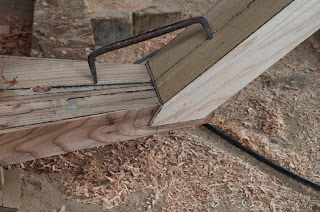 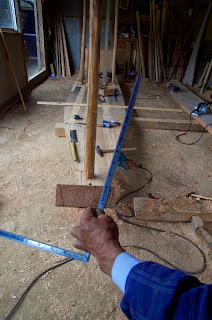 To bevel the sides of the stem, Murakami san sighted across his square, aligning it with the side of the plank keel. 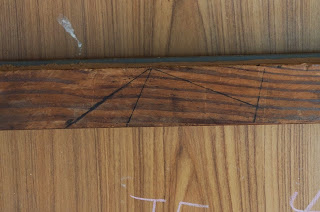 These lines, drawn on a beam in the shop, give Murakami san all the bevels he needs to cut the joint on both the stem and keel.  Of course these are not labeled so only he knows what they mean. 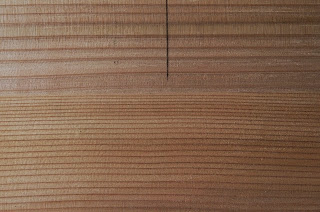 Murakami san's method of preparing the seams can yield extraordinary results.  Here is the seam in the transom.  You can only find it because of the difference in the grain of the two planks. 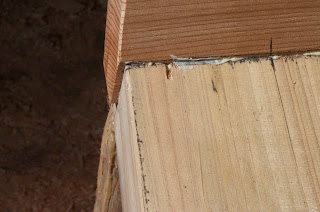 Murakami san left the transom about an eighth inch wide on either side. 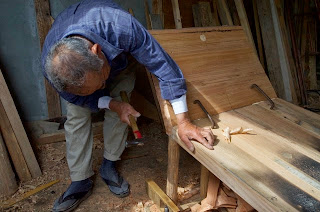 He then aggressively pounded the saying surface.  He worked both sides of the transom for several minutes of intense hammering. 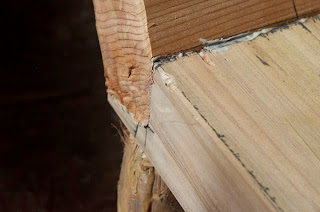 The entire face compressed flush with the keel. 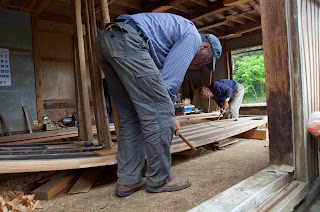 He and I then pounded the entire length of the keel where the side planks will fasten. 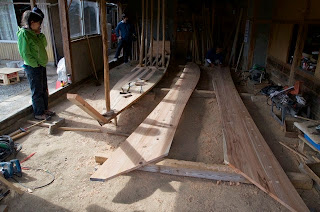 Angela looking at our backbone assembly complete, and our two side planks. 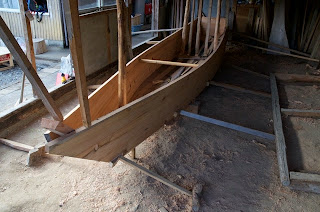 We propped the two planks in place right before the end of the day.  Tomorrow we fasten them.

Posted by Douglas Brooks at 5:15 AM