I had to shore up the overhead beams in the shop in order to bend the bow down a bit.  At the stem the bottom drops 3 inches.  What this does is create a sharper entry for the hull forward and it helps the boats track straight in the water.  With a flat bottom like this the hull is likely to slew or skid otherwise.  I've seen this on boats in Tokyo Bay as well and in fact the chokkibune I built with my teacher in Tokyo had the same feature. 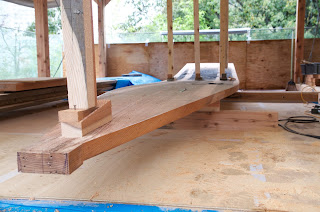 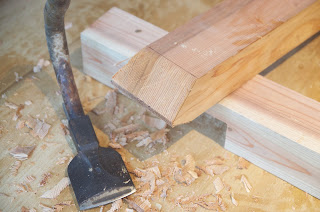 I roughed out the base of the stem first with an adze, then finished with a plane. 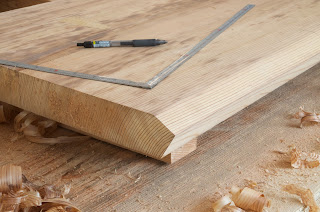 The base of the transom get a pair of bevels as well. 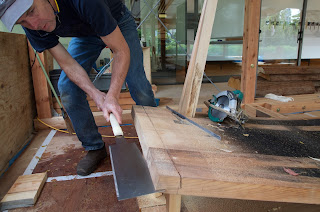 I made the corresponding cuts to the bottom for the transom. 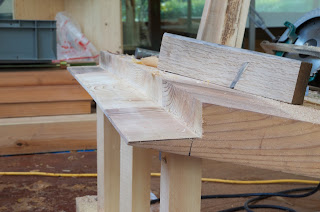 And finished the joint with a rabbet plane. 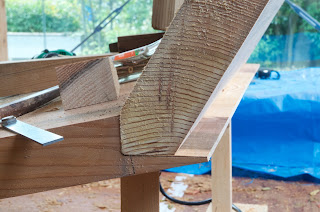 The transom is fastened with five nails entering through the back and going straight into the bottom planks.  The excess visible on the bottom will be cut off later. 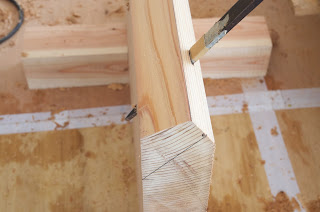 Chiseling the nail holes in the transom, following a guide line. 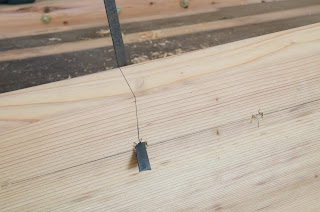 I use this chisel, with a unique tip, to clean out the hole so the nail isn't too tight in the transom itself and risk splitting the edge.  You rock this slightly while pounding so the two cutting edges clean the sides of the hole. 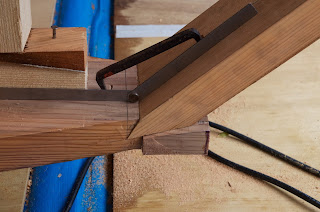 At the bow I check the angle with a bevel gauge and use a large dog to help hold the stem in place.  Japanese boatbuilders have dozens of these, which they call kasugai, or staple. 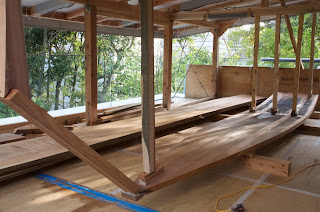 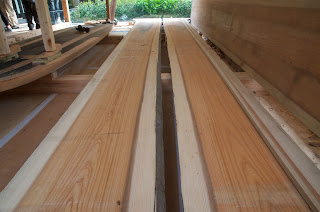 Some of the planking stock.  These planks have quite a sweep upwards aft, and I noticed in my notes last spring Murakami san used the material with the root edge forward for the lower half of each plank and the root end aft for the upper half.  The flare at the root is handy for providing the material for the sweep.  Normally Japanese boatbuilders orient all their material with the root end forward.  One of my teachers told me the reason is the root end is stronger (supporting the entire weight of the tree), but I also wonder if the more knot-free wood at the root is less problematic to bend at the bow? 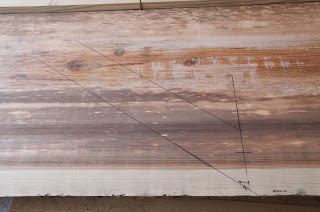 Layout at the stem. 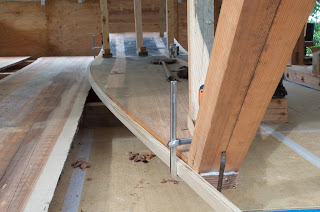 I sprung my batten around the bottom and marked off the station locations for my plank layout.  Rounding the curve forward the station distance is increased slightly. 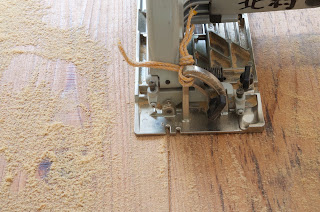 I've talked at length elsewhere in this blog about fitting planking by running a handsaw through the seam.  I decided to try Murakami's method and use the circular saw.  Its exponentially faster and the results are great.  Murakami didn't use a handsaw at all but went from the electric saw, to pounding the edge, to fastening.  Actually, he pounded edges much, much more than any of my other teachers. 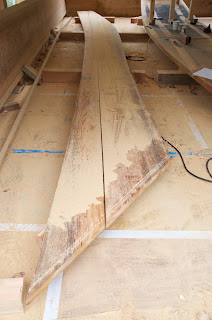 I also noticed from my notes that Murakami san did the layout for each of the two planks.  In the interests of time I just used one plank to trace the shape of the other.  I couldn't think of any reason not to. 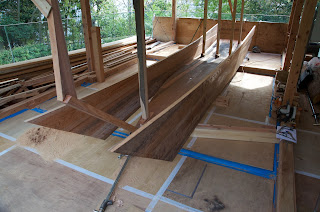 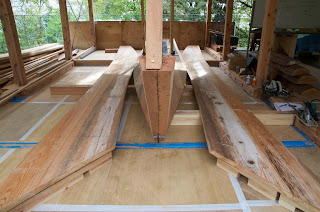 Next blog post will describe nailing the planking material together, followed by hanging the planks on the boat.

Posted by Douglas Brooks at 5:02 PM