Yesterday we bent the bottom of the boat.  We used the Asian process of bending over an open fire, called yakimage in Japanese.  When the museum told me a few months ago they planned on inviting Mr. Murakami and his wife down during the project I asked if he could come when we did this.  I've bent some thinner side planking this way with my teachers but I was not at all opposed to having him take me through this process one more time.  Bending a plank almost eighteen feet long, three feet wide and two inches thick is pretty daunting.  Here's the last time we did it.

I did think our chances were good because my material is very green.  Even Murakami said he'd never bent such green wood (Japanese boatbuilders work with material air-dried one year).  My cedar came from a log that had been soaking in a pond for at least three years, then sawn just six months ago.  When I pilot nail holes with a chisel water squirts out at me.  The glue Murakami gave me failed two tests on this wet wood, and we just managed to find some Gorilla Glue (almost unavailable in Japan, as it turns out) which was ideal because it's made for wet wood and heat resistant. 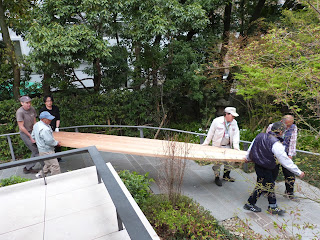 Carrying the bottom plank, comprised of three pieces edge-nailed together, down from the boatshop to the museum's parking lot. 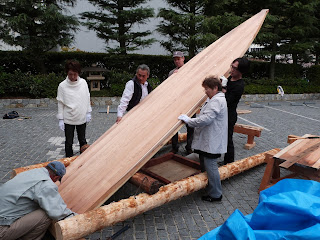 Mr. Murakami on the left and his wife, center, supervising the setup on the bending form.  At home they wedge the end of the plank under their house. 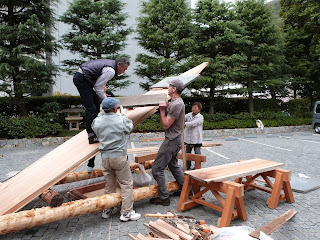 Sliding the first of three large paving stones onto the plank. 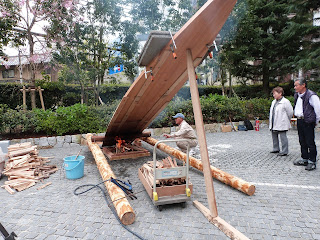 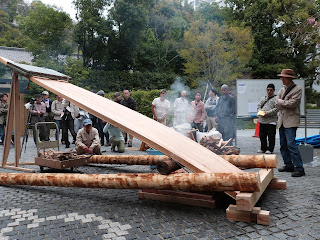 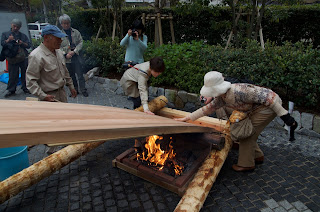 After about 90 minutes you could feel the heat coming through the back of the plank.  In Tohoku last spring the plank was much drier and I noticed it got much hotter. 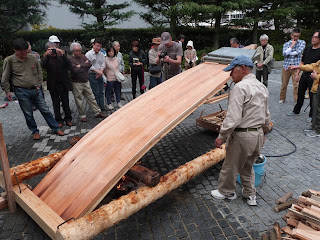 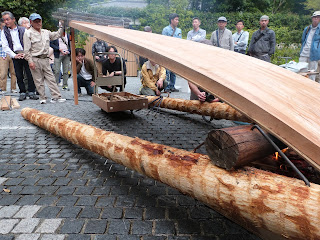 After an hour we began about an hour of progressively shortening the post holding up the end of the plank. Murakami was happy to let the stone weight (over 200 pounds) more or less naturally settle the plank. 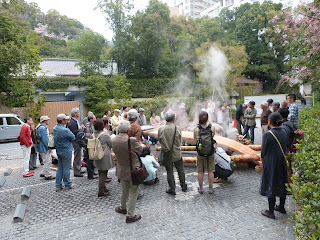 We held a demo and had fifty participants.  At one point I told Mrs. Murakami this was probably more people than in her entire village.  I worried a bit about how Murakami would react to all the people.  He worked in silence for the first 90 minutes, and the crowd stayed respectfully silent.  Then some people came forward to tentatively ask questions and Murakami happily answered them all.  One nice benefit of his visit was someone ordered a boat from him! 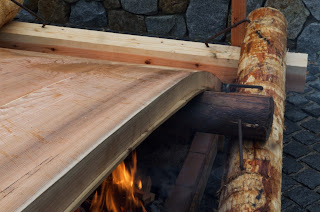 If you look closely down the plank edge you get an idea of how much bend we achieved. 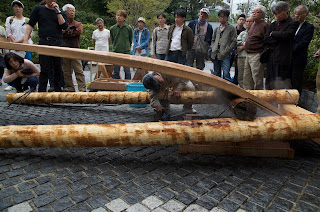 Murakami constantly doused the plank as the surface ignited.  Even so, the center of the plank is burned away at least a 1/2 inch.  Here he is finally putting the fire out almost three hours after we started.  We let it cool for another hour before taking it back to the shop.  No matter regarding the charred wood as the boat gets floorboards. 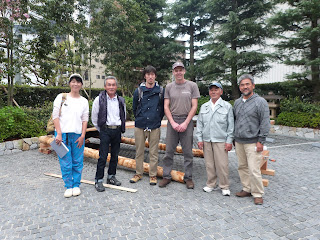 Our workshops have drawn very, very interesting crowds, really giving me hope for a revival of Japanese boatbuilding.  From left to right, Kyoko Kunioka, a woman from Okinawa who apprenticed with one of only two elderly boatbuilders still working and now has built two sabani; a house carpenter from the mountains of Hiroshima who is reviving the local tradition of cormorant fishing boats, having also built two; an artist from Nagoya who apprenticed with a boatbuilder on the Japan Sea; me, Mr. Murakami, and my friend Mori san, a long distance sailor from Okinawa who has been making inter-island voyages in sabani.

Okinawa represents the strongest resurgence of Japanese boatbuilding, driven by a committed group of people who have discovered these traditional boats and now race them.  The best overall source of information (in English) on what is going on is this cultural center's website.