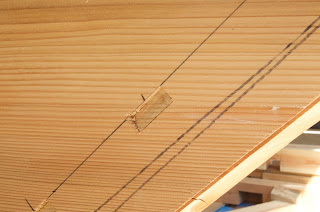 The only nails in the side planks where mortises are cut for the heads are along the stem and transom. 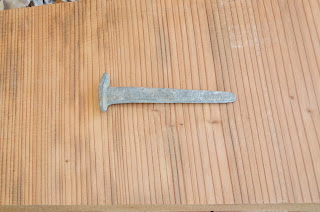 This is a short nail for the stem.  The larger head means its intended to pass through a plank and fasten into another timber, as opposed to edge nails which have very small heads. 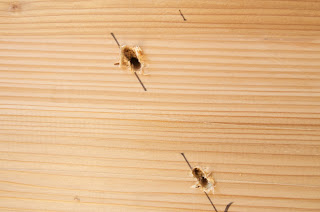 One of the things I have learned teaching these techniques to students are a few tricks to make the process less error prone.  One is using a long, narrow drill bit to pilot a hole, like here at the transom.  The tsubanomi, or special nail chisel, will follow a drilled hole.  It is much easier for students to drill at the proper angle than try to master the chisel while also getting the hole in the right place.  As I withdraw the bit I move it from side to side so it opens up a wider hole in the plank.  This is to accommodate the shank of the nail at the head.  Then I properly cut the pilot hole with the chisel. 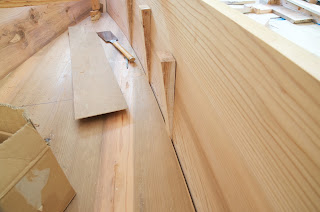 Once all the nail holes have been cut I use wedges inside the boat to open a gap between the plank and the bottom. 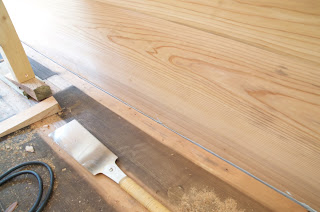 Then I used a caulking gun and got some silicone-based adhesive in the seam.  In the old days boatbuilders put raw lacquer in the seams, but this was an expensive material and once glues appeared the switch was made.  Japanese boatbuilders treat this more as a bedding compound than an adhesive. 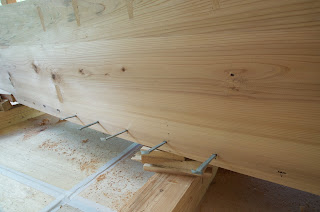 I worked in five foot sections, wedging, spreading glue, nailing, then moving on. 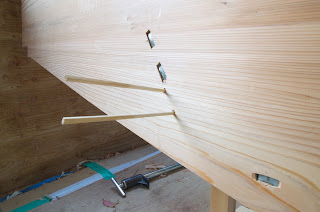 I had two mistakes drilling holes in the transom (both times the drill came out inside one of the nail mortises on the back of the transom).  Wooden convenience store chopsticks were handy to plug them.  The lower fastening is into the bottom and I did what Murakami san did: pounded the nail flush then set it slightly with a nail set.  The wide head of these nails gets a good bite on the planking. 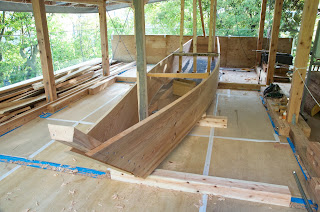 With the planks nailed on I could remove the props from the bow and sides. 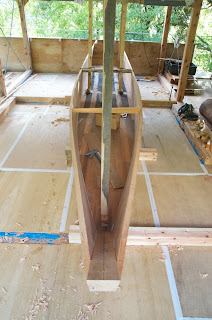 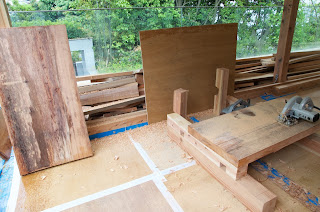 Today I worked on making the bulkheads, which came from some wide slabs of cedar... 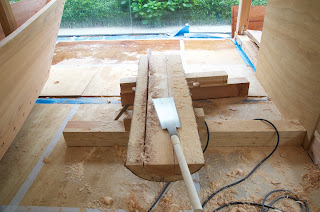 ... and the beams, which I cut from my hinoki timbers.

Posted by Douglas Brooks at 4:00 AM