Now its all the little stuff, for the most part, to finish the boat.  Though the stem and rub rails are pretty major elements.  But today I fit and installed the stern deck, fastened the bulkheads through the boat's bottom, and trimmed the plank edges. 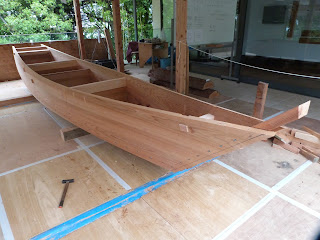 But first I removed the props that have been holding the hull since we bent the bottom to shape. 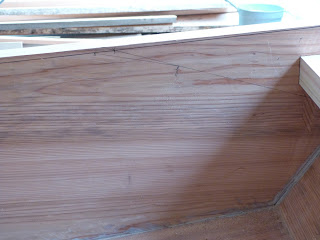 At the stern I followed Murakami san's layout for the two-piece stern deck, which has a slight angle between the two pieces (just to make it harder, I guess). 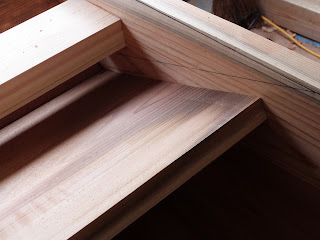 I took some measurements and cut the first piece out roughly.  Because the boat has tumblehome (at the stern the side planks slope inward at the top).  I could raise the piece up inside the hull until it got tight to the sides, below the line as you can see. 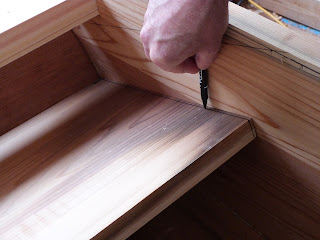 Holding my pen tight to the planking I scribed the shape of the sides and the angle on the edge.  I then cut to my line, knowing that the scribed lines should still be a bit large. 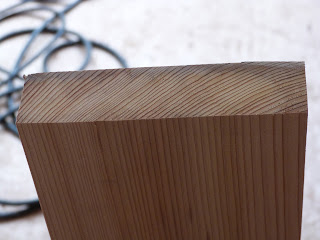 Then I did something Murakami san depends heavily on, kigoroshi, or pounding the plank edges with a round-faced hammer.  If you look closely what I did here was pound the entire surface except for the top edge (which will be visible) and the forward edge (which has to fit tight to the next piece). 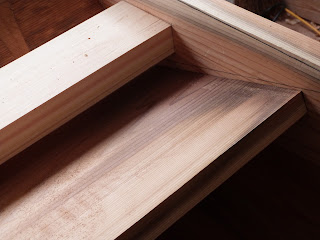 Then I fit it again, much closer this time.  But having pounded most of the end grain faces there is just a narrow edge actually touching the plank.  This made it much, much easier to plane a little bit away. 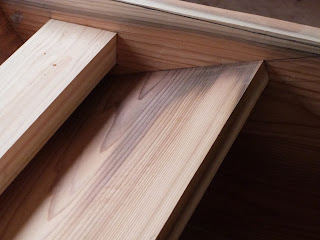 It was still tight but I just tapped it up with my hammer.  Again, with the reduced surface area of the end grain the small edge that touches easily crushes.  The result is really a perfect fit.  You are not cutting to fit but wedging material together. 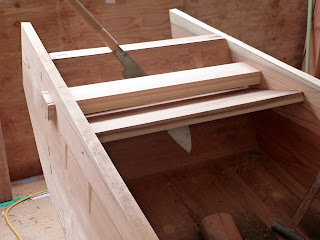 In order to fit the back edge of the deck to the face of the transom I ran the saw through a joint a few times. 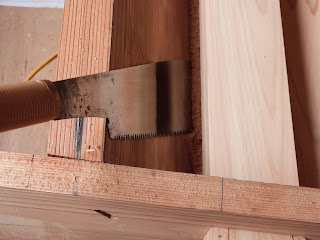 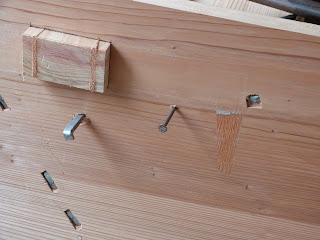 Then I nailed the deck around three sides from the outside.  I had pre-drilled from the inside, then ran the bit back into the deck once it was in place (it stayed there nice and solid, wedged in place).  I inserted some common nails just to keep it in place while I chiseled holes for the boat nails. 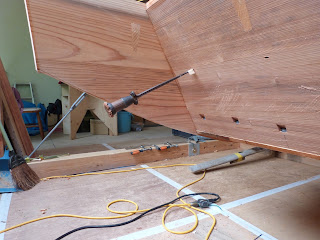 And I did the same through the transom and into the deck.  Drilling out first from the inside at the precise location and angle, I then run the drill from outside into the deck edge.  I let the drill follow the hole through the transom so I know the angle is right.  Drilling these small pilot holes is not something my teachers did, but its a huge help, because as you chisel with the tsubanomi if you keep a relaxed grip the tool will follow the hole.  Needless to say this would be a very difficult hole to chisel through the back of the transom, hit the deck edge, and travel through its center.  Murakami san did it, but he's built over a hundred more of these boats than I have... 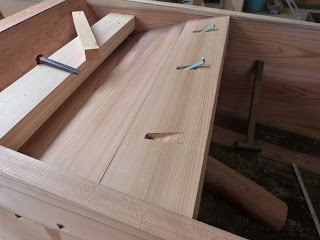 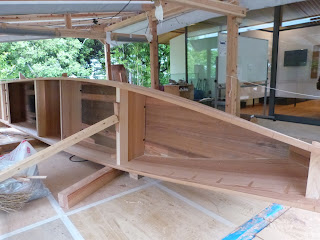 Then I rolled the boat on its side, just about the limit of my strength to lift one side. 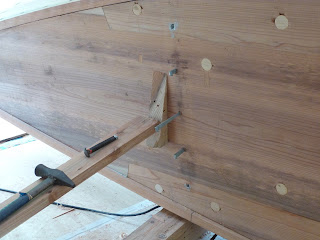 And I put fastenings through the bottom and into the three bulkheads. 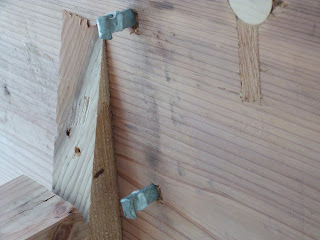 I put a little bit of goop around each nail just before hammering it home.  The are countersunk slightly in small mortises and Murakami san squirts in some kind of silicone to cover all exterior nail heads.

Posted by Douglas Brooks at 3:56 AM