Lanyu Island, Taiwan and the Boats of the Tao

After a hectic two days of travel we find ourselves on Lanyu Island off the southern coast of Taiwan. I've been brought here by the Asian Cultural Council of New York and their Taipei office to look at the boats of the indigenous Yami people. 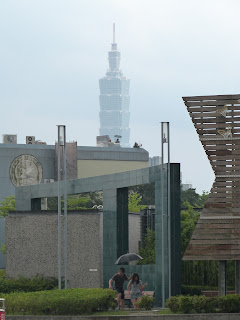 We flew from Osaka to Taipei, less than three hours, and took a taxi to the domestic airport.  Here's a view from the terminal's front door of a single massive skyscraper that dominates the Taipei skyline. 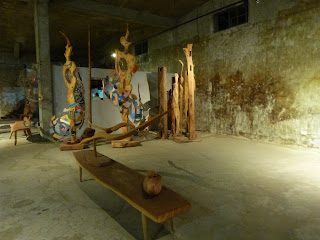 Rita Chang, the ACC's Taipei director and a board member flew with us down to Taitung on the SE coast of Taiwan.  They introduced us to Rahic Talif, an indigenous artist whose studio is a sprawling former sugar cane plant.  His work is extraordinary, drawing on his cultural connections to the sea. 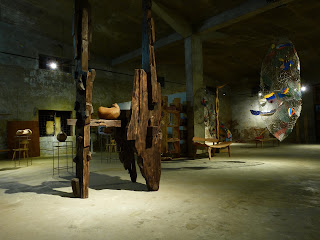 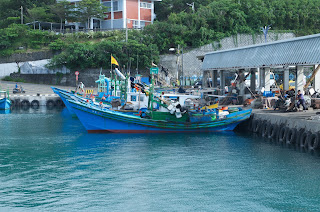 We left Taitung harbor by ferry, and got a glimpse of the wooden fishing fleet there. 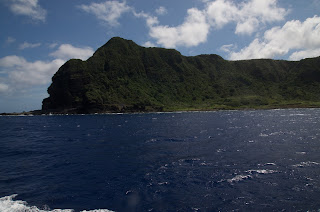 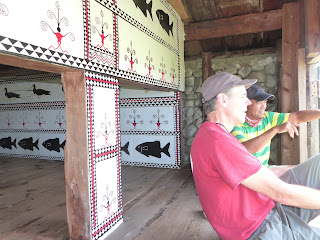 At the ferry port we were met by a local man named Sinan Lamuran, though he explained the Tao people (which is what they call themselves, not Yami) do not have family names.  Here he is showing me a traditional home, which was built into the hillside as protection from typhoons.  Just the roof shows above ground. 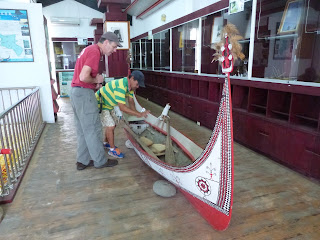 In the local cultural center I saw my first tatara, the small boat built and used by the Tao to catch flying fish.  As Shaman described the boat to us he said it is the beginning of the fishing season right now and so fishermen are busy and may be difficult to interview.  He also explained some of the taboos around fishing, which are heightened at this time of year.  Catherine was cautioned to not approach the boats too closely, for instance. 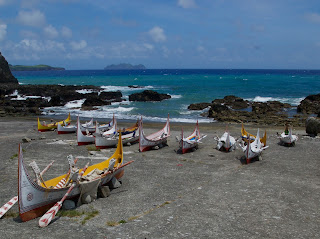 All the while, I was still wondering just how much of this culture could still exist in an era of mass-produced everything.  The roads of the island are filled with motor scooters, Lanyu just got a 7-Eleven store, everyone seems to have an iPhone, etc.  But we arrived in the village where we are staying and this is the scene at the harbor. 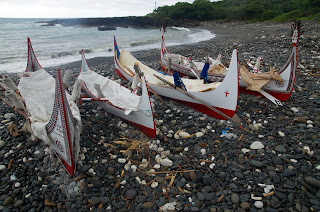 And this is the beachfront at the adjoining village. 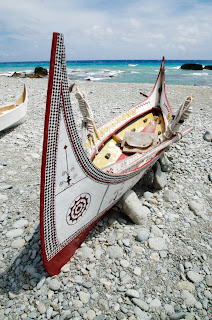 Fishermen build their own boats.  Its a long process, and while fashioning boats the builders are also accumulating foodstuffs in preparation for the launching, which is a community event.  In fact we've been told several times when I have asked how long it takes to build a boat, that the first thing you must do is plant plenty of tarot, the staple crop. 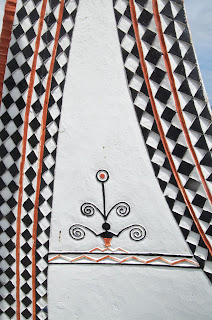 These boats are famous for their distinct shape and amazing carved and painted decorations.  The human figure's location on the boat will indicate which village it comes from (Lanyu has six villages and at least four have these boats).  The circular carving are the boat's eyes, which keep an eye out for danger, protecting the fisherman, and according to one written source keep an eye out for flying fish. 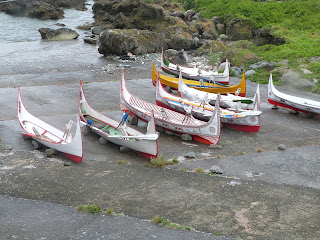 I went back the second day to look at the local fleet.  An old man was moving his boat further up the ramp (big storm forecast) and I started to engage him in conversation.  The Japanese side of my business card identifies me as a boatbuilder in kanji, which are the characters that can be read by Japanese and Chinese, so I introduced myself with my card.  His initial obvious reticence evaporated and he invited up onto one of the ubiquitous platforms around the island to sit and talk. 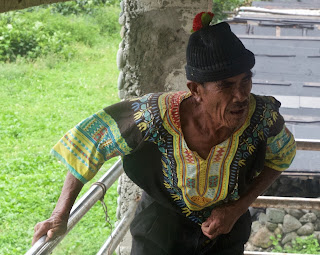 We were basically communicating via hand gestures when I accidentally let slip with a word in Japanese (in situations like this your brain grabs for any foreign word it knows; I used to sprinkle my early Japanese with French).  The fishermen then replied to me in Japanese!  Japan ruled Taiwan (Formosa) from 1895-1945 so its not surprising that some elderly might know the language.  His vocabulary is pretty basic but I learned that he did build his boat and he is seventy years old.  Later Shaman told me it was his uncle and he had just finished a new boat.  We hope to interview him later. 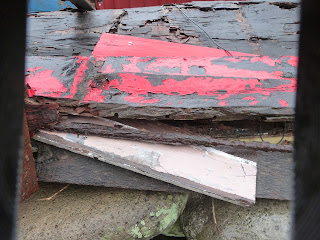 We found some planking which shows the closely spaced wooden doweling which edge-fastens the planking.  The fore and aft sheer strakes are cut from the trunk/root connection which gives the boat their distinctive shape.  I was told the prows act like sails, steadying the boats in high winds.  I was also told these boats are built entirely using just an axe, from felling the trees to final finish.  Hard to believe the carving is also done by axe but I hope to find out more.

With a lot of rain our second day Shaman offered to drive us around the island so we could get the lay of the land.  Its just 36 kilometers by the coastal road and amazingly this weekend they are hosting a full marathon, which will run a figure eight course lapping the island and crossing the single mountain road twice.  From the looks of the mountains this could be one grim race, plus the 90 degree temperatures and 90% humidity.  There is apparently a 5K race too which I am hoping to enter. 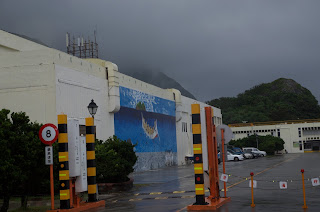 At the southern tip of the island is Taiwan's nuclear waste storage facility.  This was established thirty years ago and is now the center of a huge controversy.  The islanders actually managed to prevent the last shipment of material here some years ago but the Taiwanese government, which has always called this "temporary" storage, has not been able to find an alternative site.  Their first idea was actually to dump the waste in the ocean off the island, but thankfully a UN treaty forbade that!  Note the painted motif of the boats...  All Lanyu residents get free electricity for their homes (not businesses) and a payout every two years (not much) from TaiPower. 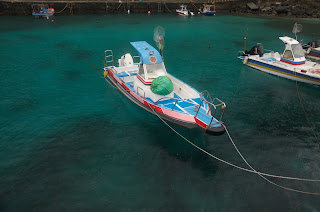 Not the ocular symbol painted on the fiberglass boat. 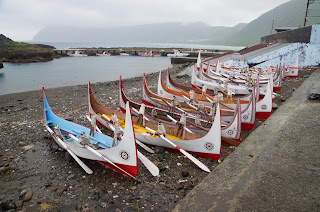 We found more boats on the other side of the island, where the waters are calmer this time of year.  Anyway, I am just beginning to understand the culture of these boats.  There hasn't been a lot written about them, it seems, but hopefully I can glean more from interviews.  It is clear that this tradition is in danger of dying out, because the boatbuilders are getting older and young people are forced to move off the island for work.  As for documentation, I've seen a couple of drawings by researchers showing exploded views of these boats listing the parts, but the builders all work by eye, designing the boats no doubt by imitating others and from experience.  A well-built boat is a source of great pride to the builder.