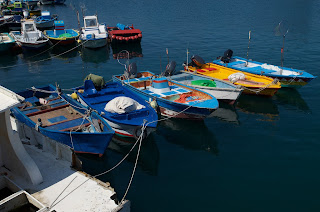 We left Lanyu Island by very a few days ago, back to Taitung where we opted to rent a car and drive back to Taipei along Taiwan's east coast, rather than fly.  In Lanyu's ferry harbor I took one last photo of some brightly painted fishing skiffs. 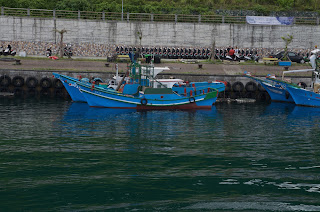 Our ferry stopped in Green Island on the way, where the harbor had the typical large wooden fishing boats I had also seen in Taitung.  I tried to find out where they were built (probably Taitung) but not luck. 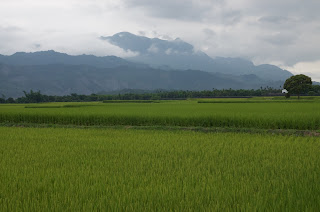 We set off through what is called the Eastern Rift Valley, squeezed between the central and the coastal mountains.  The rice was just verdant. 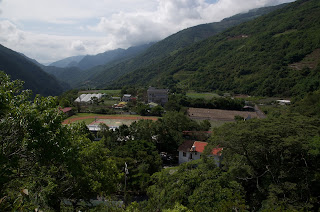 We spent the night high in the mountains, about 20 km up a major river gorge in the central mountains, near this aboriginal village. 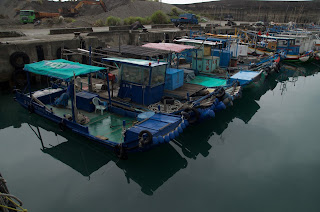 The next day found us back out on the coast, leaving the sunshine of the Rift Valley for intermittent rain.  We found a harbor full of those pontoon boats and decided to stop and take a closer look. 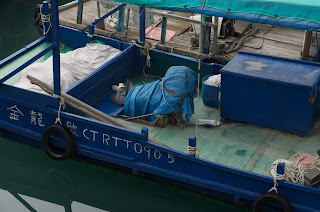 I noticed the boat in the foreground was powered by a not-too-large outboard mounted in a well on deck. 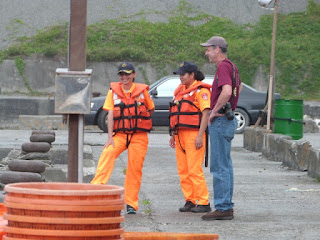 Two helpful Taiwanese Coast Guardswomen tried to answer my question of where the boats were built.  They radioed a colleague who spoke English and the consensus was these boats are built in Taitung. 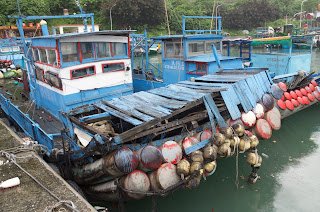 Since we had long since left Taitung behind we kept heading north, and in the next large port found even larger pontoon fishing boats. 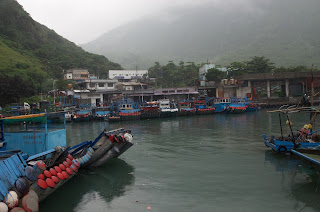 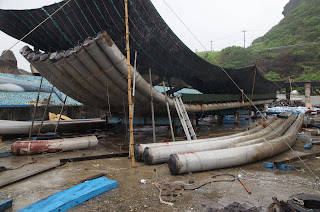 As well as one under construction!  I paced off the length and this is about an 80-footer. 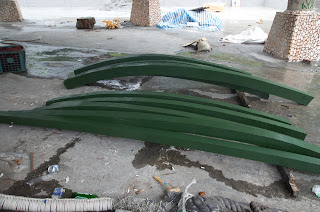 Curved beams were freshly cut and painted, waiting to form the bow of a boat. 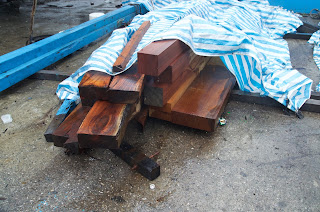 There was a large pile of these timbers, a dense, rock-heavy tropical hardwood. 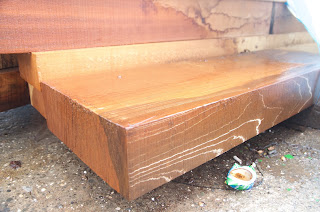 Note the white grain running through the brown sapwood.  The heartwood is a brown-orange color.  I wonder if any readers have theories on what species this might be?  Given the overall nature of these boats I suspect its a relatively cheap timber.  Wish I could bring home a few hundred board feet. 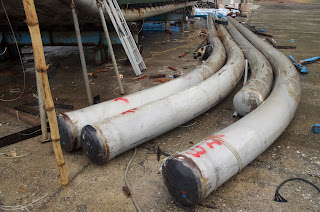 One of the massive pontoons (these are over a foot in diameter) was cut off and I noticed it was full of white styrofoam. 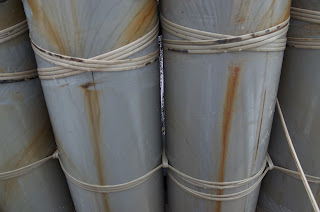 Once again, these are sea boats and held together with just plastic strapping. 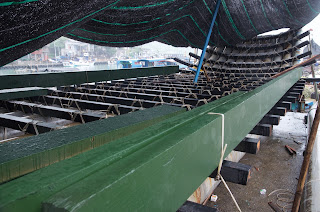 A look at the framework.  The cross timbers are all heavily covered in creosote and bolted to the painted longitudinals. 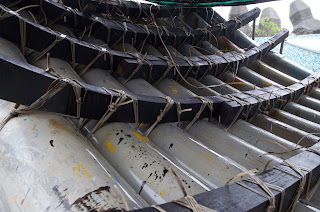 The curve at the bow is made of two compass timbers bolted together. 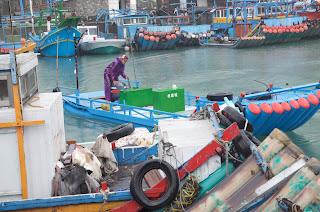 A smaller pontoon boat came in while I was there. 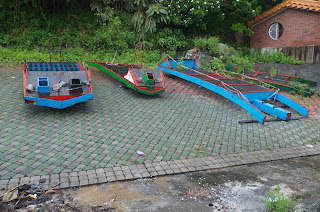 Off to one side of the yard were four frameworks, perhaps awaiting new pontoons. 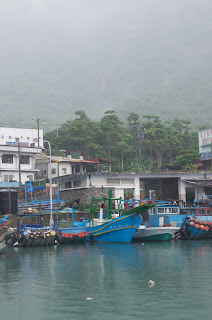 I spied one nicely-shaped wooden boat across the harbor.  It had a different hull shape than the others I have seen.

Posted by Douglas Brooks at 5:09 PM