I am in the final week of the project now.  The boat has to be finished by Friday because our launching ceremony is Saturday.  And we are off to Kyoto and then Taiwan on Sunday (more on that later).

So today I cut to shape and installed the kuru koberi and the miyoshi.  I can't translate the former since it has no equivalent in English, but the latter is the stem.  In the case of this boat, the outer stem.  Murakami san in the only boatbuilder in Japan I have met who builds using a two-piece stem, also known as a false stem. 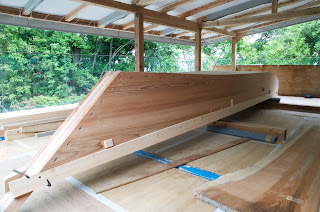 You can see here that I fastened the plank ends to an inner stem of cedar.  I will add an outer stem of hinoki tomorrow, a timber I began shaping today.  Murakami san did this for the simple reason that its faster than cutting a complicated stem rabbet.  He built boats with one-piece stems (the rabbet would actually be pretty straightforward because the edge of the planking is not curved).  In this photo you can get a look at the downward curve at the bow, intended to dig into the water, allowing the boat to track better. 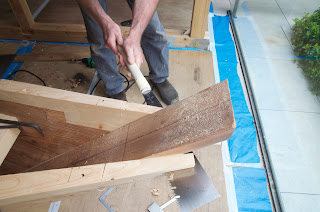 After rolling the boat upright I cut off the top of the false stem and notched the planking for a small deck.  I used this magical saw the saw sharpener in Kyoto gave me.  He modifies a standard saw, cutting gullets and changing some teeth.  When used properly the cut surface literally feels planed. 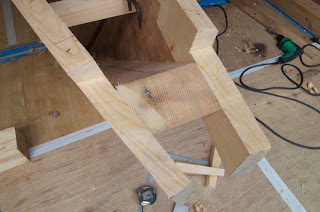 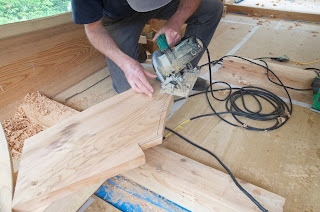 The kuru koberi adds an extra layer to the planks aft, strengthening them.  Murakami san had a traditional style of carving the forward edge.  In the interests of time I opted to cut a simple chamfer along the curve. 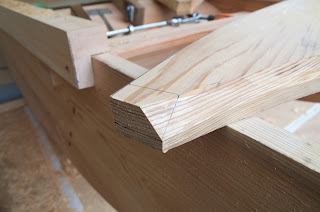 I beveled the forward edge as well. 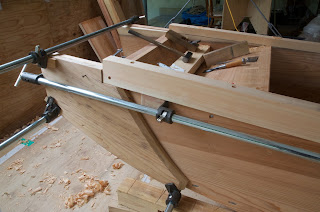 I also decided to glue the two planks to the hull so I could move to the stem for the rest of the day. 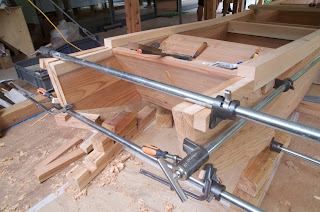 First thing tomorrow I can take these clamps off and nail the kuru koberi.  "Kuru" means to gouge or hollow and these planks are often decorated with carvings.  I gave a link to some examples in a previous post.  Murakami san didn't do any real decorating of this plank, in keeping with his need to get these boats built fast. 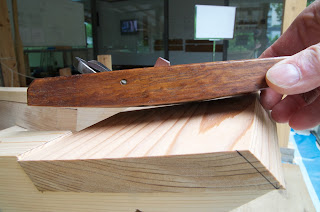 The back of the top of the outer stem is hollowed.  I adzed the rough shape and then needed a curved plane to finish it.  My plane didn't have enough curvature so I borrowed a plane from the museum's temple carpenter.  Its an absolutely lovely tool, but he wouldn't give it to me until he had "fixed" it. 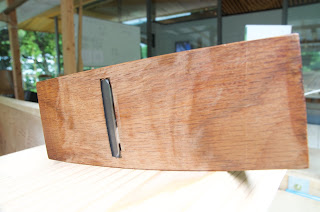 He brought it back and you can see in the center where he removed a tiny bit from the sole, using a special plane made for that purpose.  He seems to tune his planes like this quite a lot.  By contrast I have NEVER seen a boatbuilder do this.  All of his tools are kept in immaculate condition. 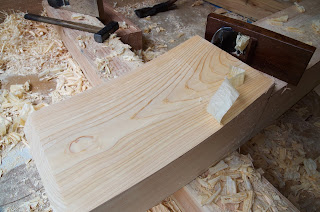 Needless to say it was a dream to work with... 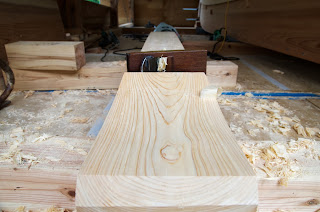 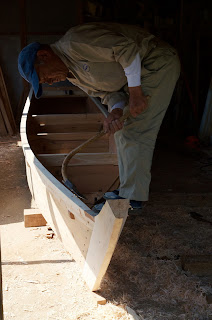 Angela Robins took this incredible photo of Murakami san adzing the back of his stem when we were there last spring documenting his work.  He waited until after mounting the timber on the boat to finish the shaping.  I have no room under my shelter to try to mimic this, so I am shaping the stem on the shop floor before nailing it.  I am also not sure I want to swing a sharp tool and play acrobat. 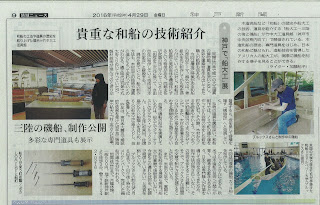 We also got a nice article in the Kobe Daily newspaper.  They even ran a photo of our Japanese boat launching last February at Middlebury College.