Yesterday we launched the isobune in Kobe harbor.  It all went well and the boat leaked nary a drop.  Many friends came to Kobe to help celebrate and it was great to see many of the participants in my workshops come as well. 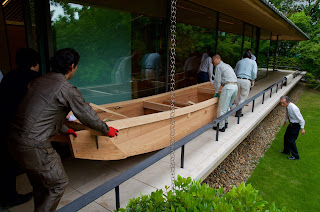 The day began early at the museum as we moved the boat from the workshop... 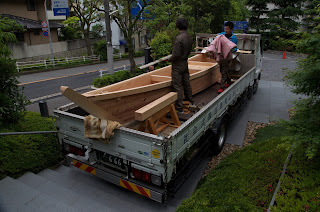 ...and outside to a crane truck. 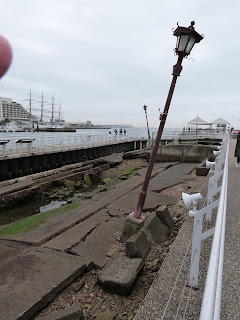 Down at the port we found a moving display: a section of the old waterfront that had been preserved after the 1994 earthquake.  Kobe was devastated by this disaster with thousands killed and hundreds of thousands displaced.  The memorial explained how the Port of Kobe was particularly hard hit and at that time Kobe handled 70% of Japan's shipping.  The destruction of the Port's cargo facilities actually plunged the nation's entire economy into a recession.

The 2011 earthquake and tsunami in Tohoku set this project in motion.  Very different from Kobe, the  rural region of Sanriku had more wooden boats than anyplace in Japan I had visited but the disaster destroyed much of this material culture.  I am grateful for the support of the Takenaka Foundation and the Nippon Foundation for letting me build this boat as a public demonstration. 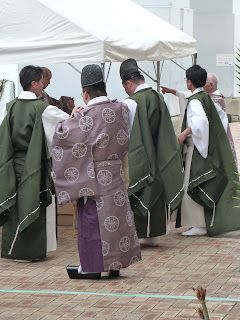 At the port the large, local shrine in downtown Kobe was already beginning preparation.  The men in green were musicians, who played gagaku, a ancient form of court music.  Three priests and two dancers completed the ceremony. 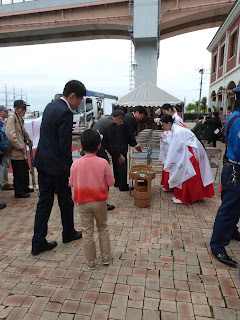 The dancers helped people ritually purify themselves by rinsing their hands before the ceremony. 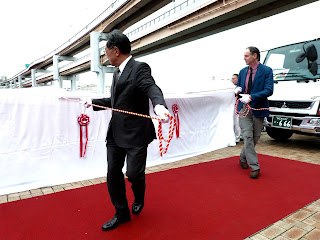 Yes, a red carpet and the boat was draped in a white cloth and was unveiled by myself, the museum's director and an official from the City of Kobe. 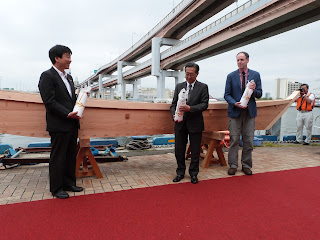 Then we were presented with bottles of sake and we each poured a bit on the boat and also a bit into the harbor.  That was one detail of this ceremony I had never seen before. 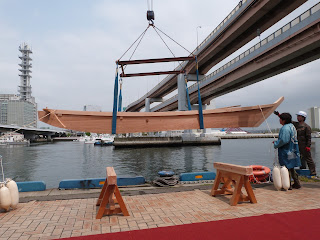 Then the crane lowered the boat into the water. 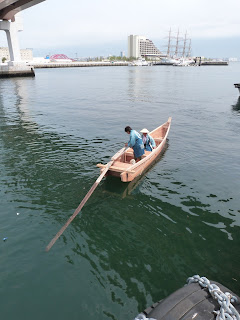 I took the first turn at the sculling oar, rowing a long lap around the inner harbor, then I gave the boat to some sendosan, or professional oarsmen, who moved the boat across the inner harbor to a floating dock where rides were given for the rest of the afternoon.  That's Japan's tall ship Nippon Maru in the background. 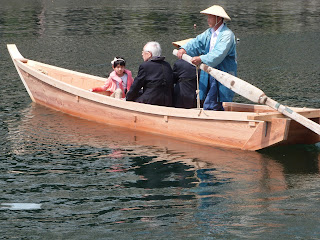 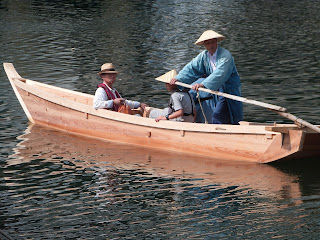 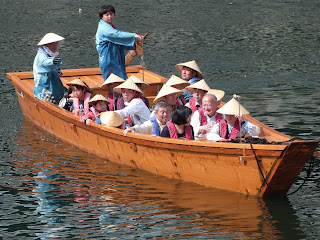 The oarsmen had come from Himeji Castle with their boat to give us more capacity to provide boat rides.  Okumura Boat of Himeji is currently building another tour boat like this to handle capacity at the castle where they give rides in the moat.  One interesting feature of this boat is the oarsman has a foot pedal which controls an electric drive in the bow.  Its not really for propulsion but for control.  I've sculled this boat in the castle moat and the bow easily blows off in a cross-wind, impossible to control with the sculling oar.  The boat is based on a river cargo craft from the Himeji area. 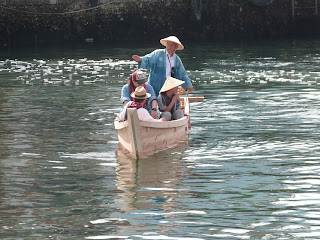 A good look at how narrow the isobune is.  Fishermen in Tohoku work alone from these boats. 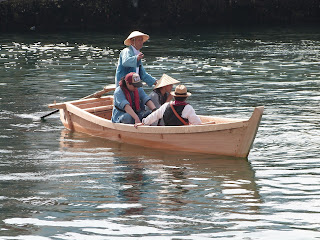 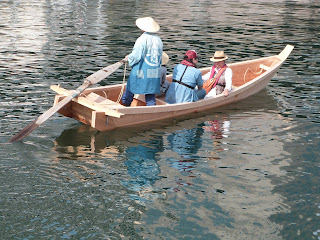 Posted by Douglas Brooks at 2:39 PM