I am writing this from deep in a mountain gorge on Taiwan, nearly as far from the sea as one can get in Taiwan.  We took the ferry off Lanyu this morning for Taitung, rented a car and drove into what is called the Eastern Rift Valley, between the coastal mountains and central highlands of Taiwan. 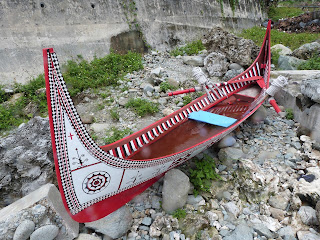 The morning of our last full day on the island, however, I found yet another tatala, this one hidden behind a seawall in the harbor.  Its about twelve feet long and looks very new.  It was full of rainwater from the previous day's storm. 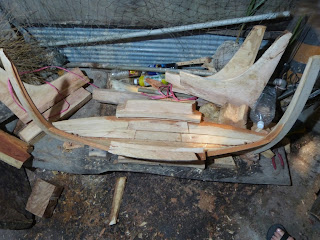 But Syaman Lamuran, our host, found me during the day and said he would introduce me to a boatbuilder that evening.  It was the stepfather of a friend of his.  We went to his house and found him working on a scale model of a tatala.  He's building it at the request of the local elementary school as a teaching tool for the students.  He is putting it together in a completely traditional style, and it was a great opportunity for me to ask lots of questions.  One thing I noticed was how all the tatala had plank scarfs so close together, something considered poor practice in Western boatbuilding.  All the planks in these boats are edge-fastened with pegs, and you can see in this photo how the center section of the sheer plank covers the two upper scarfs, which are in turn covered by the center plank section of the middle strake.  This is intentional, and explains why the scarfs are arranged the way they are. 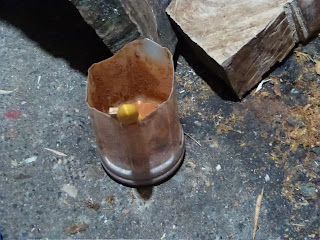 He had a jar of a red clay mixture.  He paints the surfaces to be joined, and the red clay marks the high spots for him to trim with his axe. 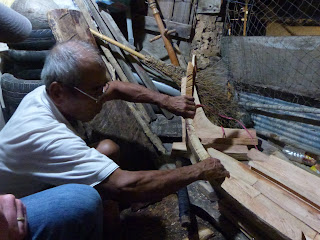 Here he is pushing the forward part of the sheer plank in place for marking... 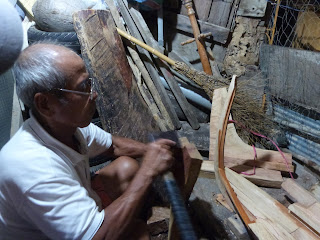 ...then carefully trimming.  This seems to be a painstaking process throughout, but it explains the amazing fits I've seen on these boats. 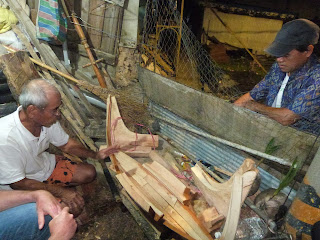 Syaman, on the right, looks on.  He and the boatbuilder's stepdaughter helped with interpreting. 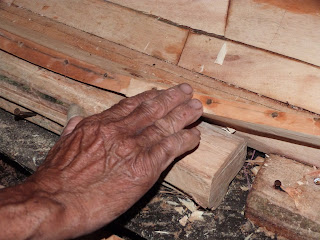 I asked about measuring, drawing, any recording whatsoever, and the boatbuilder explained he measured everything with his fingers and his span.  He said pegs in boats are placed two fingers apart, but with modern adhesives (which some people use) you can space them three fingers.  He said he used a string and put knots along its length to indicate locations for various parts of the boat. 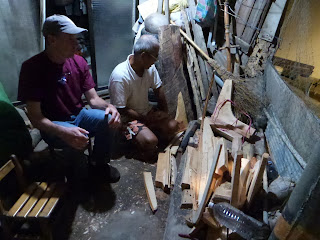 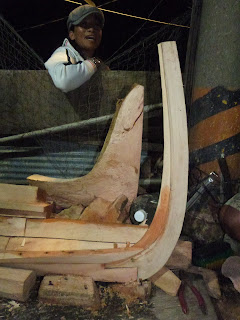 The boatbuilder's stepdaughter looking on.  The stem is in the foreground and the roughed out sheer end behind it.  These are cut from the trunk/root connection of the tree so the grain sweeps with the plank.  She mentioned that she had to help her husband dig this material for his first boat, which was odd to hear because of all the taboos surrounding women and tatala.  She went on to say her husband incorporated some untraditional techniques building his boat and her stepfather refused to speak to him for a year! 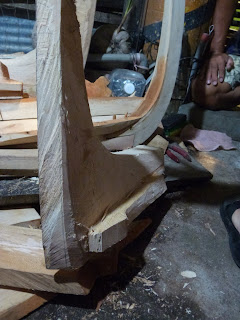 A look at the sheer plank and the inwale, carved right into it.  I asked specifically if ANY of the planks in a tatala were bent to shape and I was told that EVERY part of the boat is carved.  The boatbuilder told me the best craftsmen can rough shape the materials in the forest close to the final shape, but less experienced builders have to leave the material much thicker.  Planks are taken on and off the boat many times when fitting, and the interior is carved to final shape before assembly, but the outside is left heavy and is shaped after final assembly. 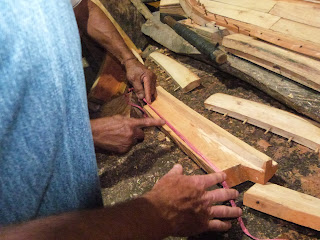 Discussing measuring, the boatbuilder got a string and showed me how he could determine the amount of curve to cut in a plank section by stretching a string over its length and inserting fingers in the gap. 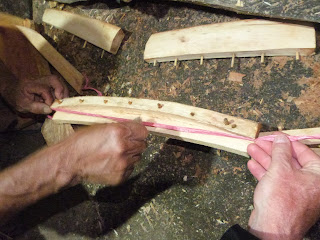 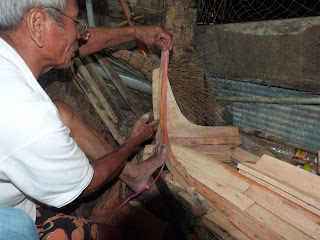 He said he did the same thing to determine the inner and outer edge of the stem. 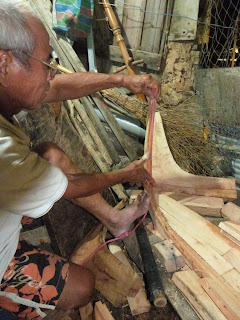 The question of the high prows of these boats came up again.  Earlier I had been told it was to keep them steady in a wind, though I could imagine with their low freeboard they could be blown over in a cross wind.  This boatbuilder said, emphatically, the prows were all about beauty and the skill of the builder.  Interesting answer, since he seems to be pointing to a non-functional purpose.  But every single person I asked how long it took to build these boats began by saying, "Well, first you have to grow taro..." The launchings can be community celebrations, their size in direct proportion to the amount of decoration on the boats.  Boatbuilders begin thinking about this before they cut down the first tree, amassing the necessary number of pigs, taro, goats, etc. that will be needed for an appropriate launch. 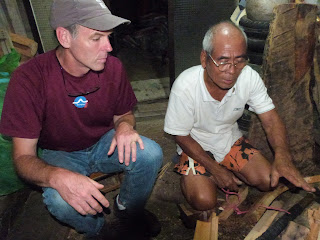 He said he had built or helped build ten boats in his lifetime, which is very impressive, since the boats are generally built by their owners.  On the one hand this means the craft is spread out through the community rather than concentrated among a handful of professional boatbuilders, but the consensus is young people are simply not learning this craft, and most of the current boatbuilders with any experience (by some guesses as many as twenty) are older.  This man is in his 60s and other boatbuilders I met were in their 70s.  Needless to say they leave no written record of any kind.  He confirmed the boats only last about ten years, twenty at the most.

Posted by Douglas Brooks at 5:14 AM