I feel like some of my recent posts have been digressions from the work at hand that it was time I got back to the boat building.  It's been a productive week in the shop, and with this posting I will try to catch everyone up on the last couple of week's work.

In an email today another blog writer pointed out that the sabani turns the log canoe on its head, starting with the side planking and then adding the bottom instead of the other way around.  He's got a good point and a great blog including an old posting about sabani:

Once we finished bending the side planking, a process that took three days of pouring hot water on the plank set-up while we tightened large turnbuckles that we temporarily bolted through the planks.  We then firmly fixed the side assembly to sawhorses, braced it to the floor (though it is not that firmly, so we have had to be careful), and then dropped the bottom timbers on top, fitting them one at a time.  The first was the largest, the center timber, followed by one side then another.  The chainfall was absolutely essential for this. 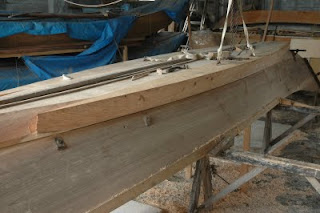 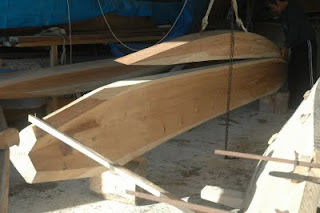 What surprised me was how slowly this process went, and how we incrementally fitted each piece.  All three pieces came off the boat and to the horses for trimming about twenty times.  But when they were finally fitted (to Shimojo san's standards) then we brought all three off the boat and set the bottom up on its side on our sawhorses.  The time had come to do the final fit of the center seams, and for this we employed a technique that is used by boat builders across Japan: surinoko.  It is also called suriawase and tosunoko (tosu mean to pierce).  It involves running a saw blade (noko) through the seam to reconcile the opposing edges (awaseru or suru). 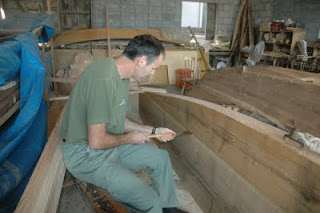 One of the big differences between the way that Shimojo san builds boats and three of my other teachers (my first teacher was basically a barrel maker and used a different technique entirely) is that he largely fits pieces with the plane (like Western boat builders do).  My other teachers would go from a rough cut with a circular saw and do all the further fitting of planking by suriawase.  My other teachers would spend half a day fitting a single seam the length of the boat.  Shimojo san believes that the use of the saw is for the final fitting only, and he's quite critical of the way boat builders in the rest of Japan work.  His argument is that it takes too long using just surinoko (which isn't born out by how long it took us to fit these timbers), and he argues that multiple passes eventually starts to round the corners of the planks edges (he's got a point there).   If you click on this photo, you should be able to see clearly how the kerf of the saw creates two parallel edges. 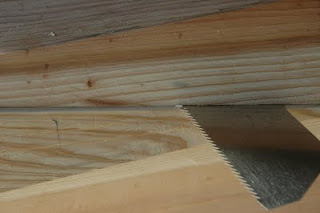 We had to brace all the pieces to the wall, given their weight, and the need to hold them firmly in place while we sawed.  Shimojo san has some great home made tools, basically old saw blades that he broke off and filed smooth.  These are wedges that hold the seam slightly open so we can run the saw through (my other teachers used wooden wedges or caulking irons, but I have to say that Shimojo san's use of old saws here is brilliant).  You work these wedges on either side of the saw, as needed, to keep your saw from being pinched.

The sawing motion is VERY important.  Essentially the kerf of the saw, in passing between the two pieces, is creating two parallel edges.  In our case both the side pieces had changed shape as we removed material.  They were tight at the ends leaving a gap in the middle.  We snapped in inkline and carefully planed the edges straight again, but still when we put them together the ends were tighter than the middle.  We did about three passes with the saw at either end and one long, slow pass down the middle and Shimojo san called it done.

His son explained to me that while sawdust is coming out you must move very slowly down the seam, even if there is very little resistance, because the saw teeth need to cut closely spaced kerfs.  If you move fast then you don't create the "rubbed" surface that is considered ideal.  Shimojo san's son used a good metaphor when he told me it was like rubbing glass lenses.  Here are some shots showing what our finished surfaces looked like.  Remember that these were planed smooth when we started. 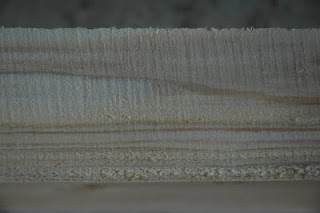 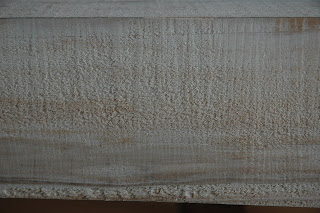 We then glued these timbers together using a glue common here in Japan called Bondo (no, it's not an auto body product).  Shimojo san said traditionally he never used glue (he never had any).  He said that with this boat he is concerned because the material didn't have the full year to dry that he likes, and he thinks that the glue is essential to minimize wood movement.  We installed dovetail keys in the seams on the outside face, spaced one foot on center, along with bamboo nails (see earlier posts about these fastenings). 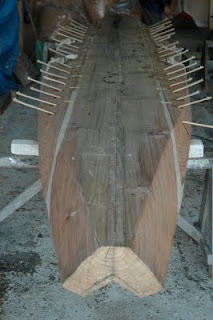 We turned the bottom over and for the last two days we have been doing the final shaping of the inside.  Tomorrow we will be putting dovetail keys on the inside face and then putting the bottom back on the boat.  Our final fitting will involved doing surinoko all along the seam between the bottom and side planking. 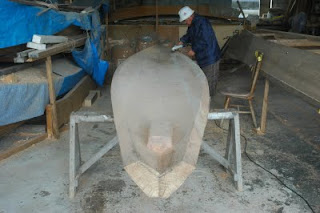 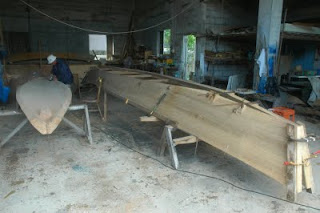 By the way, the bottom is about three inches thick throughout, and my guess is it weighs 400-500 pounds.  I also think it is going to represent perhaps 50% of the weight of the final boat.  A three inch thick bottom explains why sabani lasted the lifetime of their owners but also provided the stability needed for a hull twenty-five feet long and less than five feet wide....

Posted by Douglas Brooks at 3:12 AM