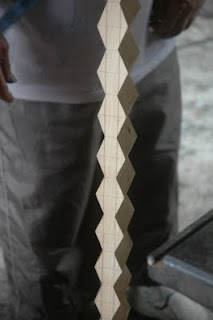 It's about time that I blogged about one of the most important techniques used in building traditional sabani: the dovetail key fastenings used to hold the boat together.  Except for some trim on the gunwales, the boat we are building will be held together entirely with these wooden keys and bamboo nails.  Called "huundu" in the Okinawan dialect (and no one yet can tell me the etymology of the word) I have found these types of fastenings in a few other places in Japan, including river boats of the Mogami and Agano Rivers, and a type of semi dugout built on the Noto Peninsula.  All these places are on the Japan Sea but far from Okinawa.  In some ways this project's genesis was in my desire to learn this technique.  I knew the last boat builder of the Agano River and he agreed to teach me, but he became to old and ill to work, so I began thinking of where else I could go and learn this.  Here I am, years later, in Okinawa. 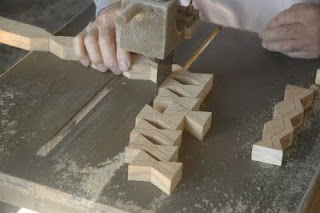 As you can see these are mass produced.  They are made of hardwood while the planking or our boat is softwood (cedar).  Each one is a little bit different so when we lay them out across a plank seam we carefully traces the edge and number them.  They need to be used in the order they are laid out. 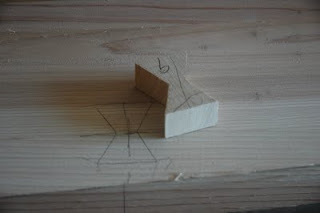 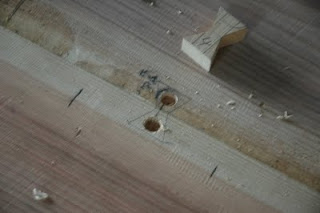 My teacher likes to use a drill set to the proper depth to hog out some of the material.  The base of the drill bit is also a guide to carving the depth of the mortise.  These are set inside and outside the boat, they are spaced at one shaku (one foot) intervals with an even stagger between inside and outside.  We had to take into account areas where we were hollowing the planking; In those places where the planking is thin, there is a 1/4 inch of material left between the base of the huun du and the other side of the plank. 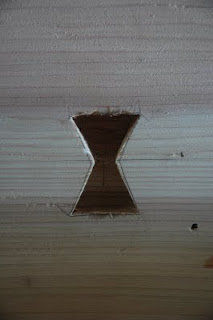 The key to cutting the mortise for them is to cut to the line at the top and bottom, but then as you approach the narrow waist of the huundu stay just a millimeter inside the line.  It is in the middle that you want the mortise to be just a little tight.  Also, the sides of the mortise are square to the face of the planking, just like the sides of the huun du.  You can just see my pencil line in the photo. 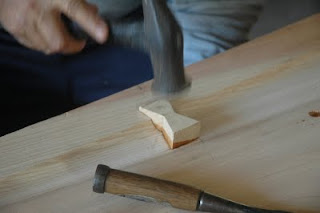 Once the mortise is finished we dip the huun du in oil (traditionally shark liver oil, now fry oil) and using a mallet drive it into the mortise.  The nature of our undercut makes the huundu pull the two planks tightly together. 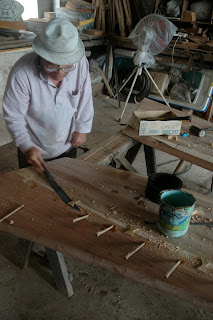 In between the huundu we also drilled holes at a very shallow angle and nailed in long bamboo nails.  The drill bit was slightly undersized and you don't drive these nails more than about 1/4" into the wood once they reach the bottom of the hole.  Otherwise they are likely to snap off.  When we are all done we saw off the excess material, plane and sand the surface. 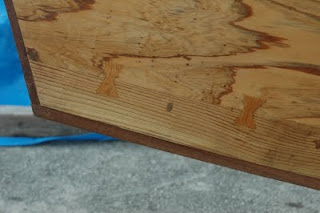 Here is what they look like on a finished boat.

And by the way, on the Agano River these fastenings are called "chigiri," or in the local dialect "chikkin."  They are also called zuzumi, after the two headed Japanese drum which they resemble.  They are well known to furniture makers the world over, as butterfly keys or dovetail keys.

Posted by Douglas Brooks at 1:07 AM