A Day in the Life on Iejima

My days start before dawn.  The sun doesn't come up until about 7 am and I am generally up at 6 making coffee in the guest house kitchen.  Iejima Guest House is a cute, clean, friendly and cheap place to stay; I highly recommend it.  The other guests besides me have been three construction workers who were here when I arrived in mid-November and just left.  Occasionally another guest will stay for a night or two but this is off season for Okinawa, so things are quiet. 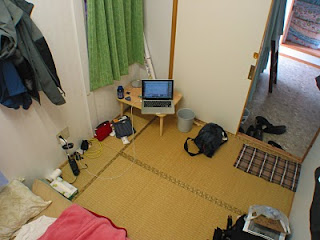 I have a three mat room, so its about 6' by 9'.  Most of the other rooms are just two mats and there are bunk beds with curtains in the hallway that qualify as dormitory living.  There are also two small outbuildings that have larger rooms with beds. 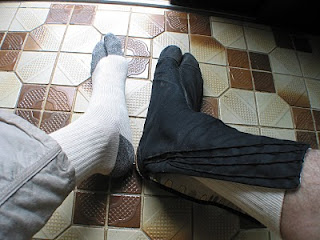 Putting on my jiko tabi is the last thing I do before heading out the door.  These are traditional toe shoes worn by construction workers.  I've come to really like them, though the people who notice them can't believe they were available in my size (12-13, or 30 cm). 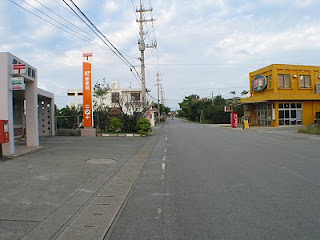 The guest house is on one of the main roads here and as I head out for the five minute walk to the shop the street is generally pretty empty.  That's the post office on the left and our local slot machine parlor on the right.

I head past a little cattle ranch where they are raising beef calves.  The breed is called wagyu.  Japanese agriculture happens on a very, very small scale, generally.  The sugar cane fields on the outskirts of town are the largest agricultural operations I have ever seen in Japan and even those are just a few acres each.  My very first posting showed some shots of the island I took from the top of the mountain, and you can see the sugar cane fields and other agricultural operations. 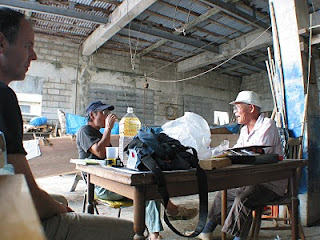 Break time: me on the left, Shimojo san on the right and our volunteer Shimabukuro san in the middle.

We work basically from around 8-5, with breaks at 10, noon and 3.  My teacher's wife demands that we break at noon for lunch, and every day I join my teacher for the meal.  He takes a short nap right after lunch and I see him back in the shop between 1 and 1:30.

Early on we were working during minpaku season.  This is the name for visiting high school students from all over Japan, who are hosted for two or three days by island families.  Several of the host families know my teacher, and his son was a regular host, so daily we would have one or two visits from teenagers.  The island's high school students are living on dorms and attending school on the main island. 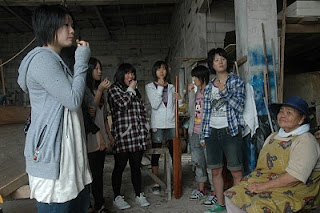 Here are some kids visiting the shop enjoying snacks made by my teacher's wife, on the right.

The one day I took off, to go see the sabani races, a group of students was leaving with me on the ferry.  Here they are waving to their host families, who came down to the port to see them off.  Its truly an industry here. 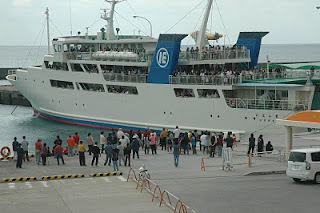 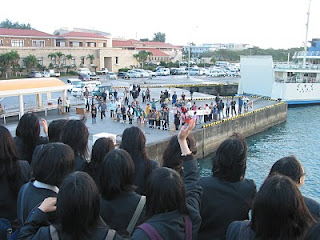 I came across a couple of actions shots from the sabani race that I didn't share with my earlier posting. 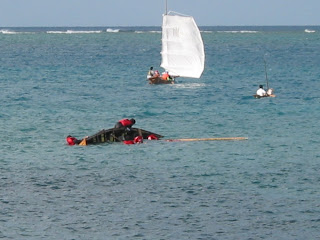 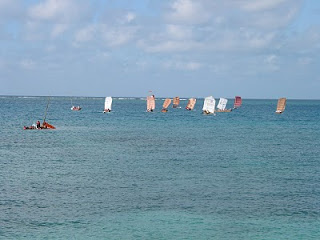 Most of my touring of the island has been when I go for a run after work.  Since we work seven days a week its been hard to see various sites but slowly I am finding different interesting places. 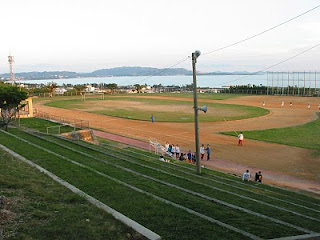 This is the view from the local junior high school.  You can see the 200 meter (half the standard size) clay track I've been running on lately.  The island's population has been falling for the last 30 years (from a high of 7,000 to the current 5,000) and there is no longer a high school here.  Students live in dormitories and attend schools on the main island.  The junior high school track team has gotten used to me.  Despite the miles of rural roads just beyond the school, all distance training is done by running endless laps of a short circuit around the school grounds.  For some reason this is very common in Japan. 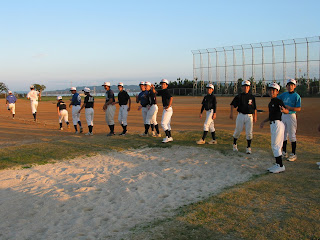 Junior high school sports are pretty serious.  Kids pick one sport and then train year round.  If I run the course around the perimeter of the field the baseball players all chant "gamba" as I go past (short for "gambarimashyou" or "good luck/do your best") 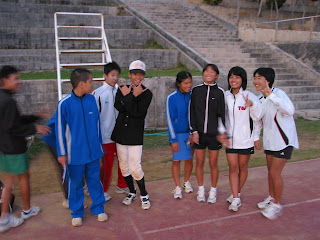 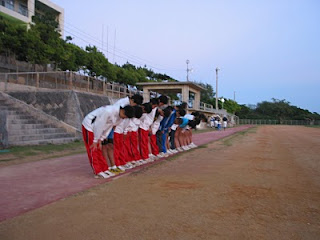 The track team has come to look forward to me showing up to sometimes run with them.  After every practice they line up, chant a loud thank you to their coach, and give him a bow.

There is one very tiny Catholic church on the island, serving mass on Thursdays when a Vietnamese priest comes over from the main island.  I was told they have five congregants.  There is also one small temple with a single priest.  Since Buddhism came to Japan from China it actually came to Okinawa early.  I've been told that the island's temple is extremely old, though the current building is not. 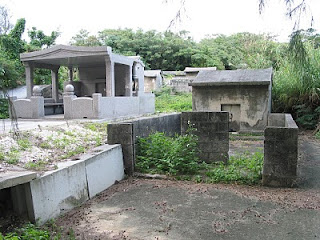 Okinawans have their ashes interred in small structures called ohaka.  These evolved from a cave-like repository.  Most are concrete though some newer (and expensive) ones are polished granite.  Most families have one that is used for many generations.  Ashes are placed in a pottery urn which is then placed inside the ohaka.  The ohaka are all located outside of town in the countryside.  They are clustered in small groups but some old ones stand alone. 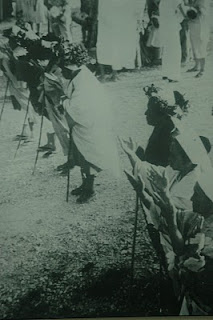 Traditionally, the religious life on the island was dominated by noro, old women who were regarded as shamans (that's how it gets translated, perhaps imperfectly).  Noro were sanctioned by some sort of governing body and I have been told that there is a 94-year old women still living here who was at least a noro-in-training. I have found one wooden house in my travels here, everything else is poured concrete or concrete block construction.  This local barbershop (still in business) is typical: a rectangular floor plan, concrete block walls and concrete tile roof.  Before the War the houses were wood with thatched roofs.  My teacher told me that having the roof blow off during typhoon season was a pretty regular occurrence.  During the Battle of Okinawa every single building on the island was destroyed.  Since Iejima was to become an air base (there were three runways here) I think that the US military intentionally razed all the homes.  They evacuated all the surviving islanders after the battle, regardless.  When they came back they lived communally in Quonset huts, and then began rebuilding with concrete block or coral block after the War.  They then abandoned their traditional style of home for what they have today. 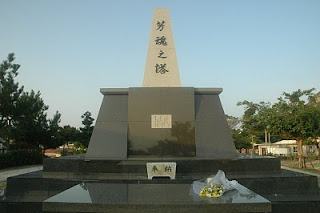 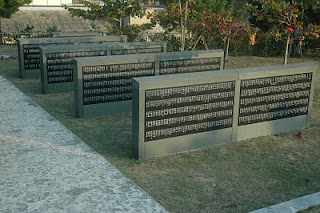 Speaking of the War I came across this memorial to all the islander's civilians and soldiers who died in World War Two.  The large tablets have their names inscribed and there are over 3,500 names on the monument.  This represents the vast majority of the island's population at the time, as much as 75%.  Most, of course, were civilians killed in the battle for the island. 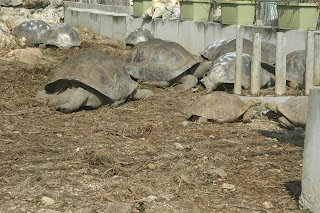 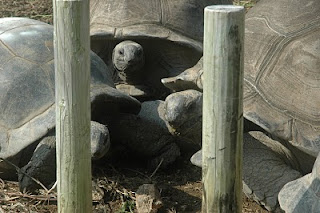 Here's a mystery: a small colony of huge land tortoises.  I've asked many people on the island what they are for and while everyone knows about them, no on seems to know the reason they are here.  One person did seem confident that the owner was harvesting the eggs for regeneration efforts.  But my conversations typically are like the one I had with an elderly lady who pulled up on her scooter while I was photographing them:

"What are the turtles for?"

"Are they for food?"

"It's for people to stop and take pictures."

But lest you think that Iejima is a backwater, slow-paced existence, I've already attended two rock concerts here.  One was mostly local talent while the other was imported from the main island.  Most bands were late middle-aged men jamming classic rock and roll.  The audiences were everyone from tiny kids to grandparents. 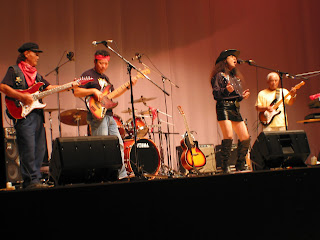 Posted by Douglas Brooks at 3:52 AM