This post could be entitled Guwa Guwa if you wanted to be strict about Japanese kana (there is no way to write "gwa gwa" in phonetic Japanese) but to do so would made it read differently than it sounds.  My main title is the way it sounds.

I left readers at the end of my last posting with a cliffhanger: what did Shimojo san say in response to my question about building sabani with just glued seams?  I was actually surprised when he responded that he thought modern glues were amazing, and that it might actually work.  After sixty years of building boats he is not willing to try, mind you, but I thought his answer was very progressive.

A few moments later he said to me, "Before glues, do you know what we did when we could see daylight through a seam?  We would put shark liver oil in the seam."  He said that this oil was thin, but that spread on a seam it would stop small leaks.  Fishermen also coated their boats inside and out with this oil three or four times a year if they wanted to preserve them.  The boats turned black and Shimojo san told his own joke, calling the old sabani the well-known name "kurobune" or "black ships" (this is the common name for the ships of Commodore Perry's fleet that forced Japan in the 1860's to open its borders).

Cross cultural note:  I read in an excellent true travel adventure story, Motoring with Mohammed, that in Yemen fishermen coated their boats with a mixture of shark liver oil and pureed dates.  Shimojo san doesn't think it is possible to get shark liver oil today.

The last steps in finishing the soko included putting in the bamboo nails to supplement the huundu fastenings, and rounding the chine.  And our order here is reversed from the old days: before glue Shimojo san would have put in the bamboo nails to hold things together so he could pound on the boat, chiseling for the huundu, and not have things move. 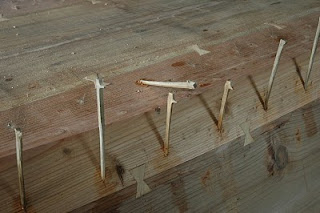 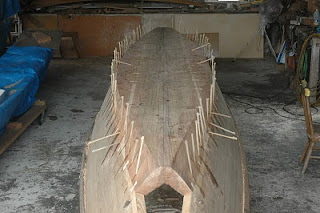 I mentioned that the boat looked like a sea urchin (a popular food in Japan) and that got a big laugh.  Note how at the hood ends of the bottom's side timbers we "stitched" them in with some nails running horizontally. 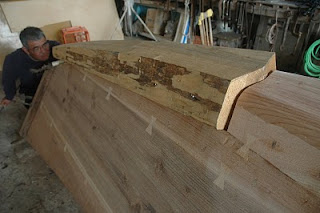 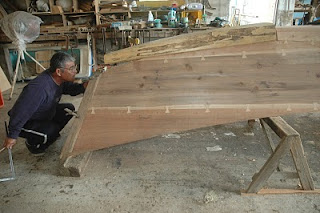 As you can see, these were roughed out well over the size required.  But these photos also give you some idea of the original size of our soko, and just how much material we took off, largely with the electric plane. 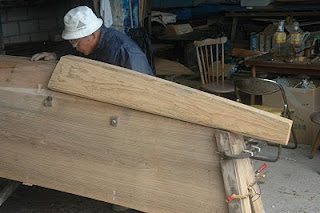 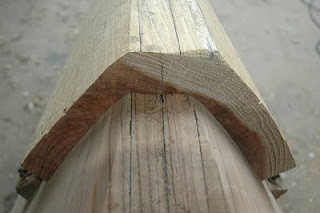 Once again I asked, just to make sure, if we could just cut this excess off with a saw.  Shimojo san said no, and pointed out that the size of our rough timber gave him the freedom of fitting it so that all the sapwood (the white part, much less rot resistant) could be removed.  Perfect answer.  And we will remove all this with the electric plane, and I am beginning to realize that it doesn't take that much longer (it's just messy, dusty, noisy, etc.).

The gwa gwa join the soko with a shallow V-shaped butt joint.  The edges of the planks were first straightened, then the bevels made even throughout to make up for the twist in the planking.  Shimojo san and I worked on fitting the butt joint running a small cross-cut saw in the seam, closing it tight after each pass by tapping the end.  We quit for the day just as we finished the bow; Shimojo san said it was too dark to see anyway.  I asked him again why there were no lights in the workshop and he said that if there were, one would be inclined to work too much! 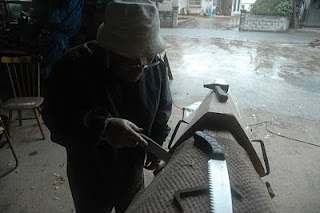 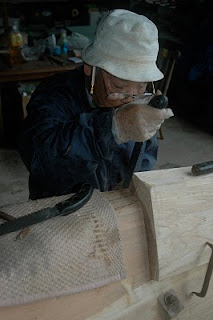 Point that out to your boss tomorrow.

Posted by Douglas Brooks at 1:56 PM