Once we finished fitting the last seam along the bottom we broke for lunch.  After lunch I was a little surprised as some of Shimojo san's family started to join us in the shop: his wife, daughter, son.  I was there as well as our volunteer, Shimabukuro san.  Turns out it was time to glue the bottom timber to the side planking. 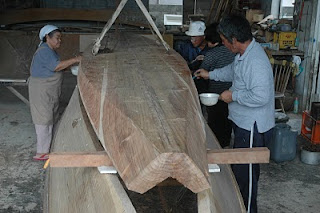 Gluing that seam had not been mentioned before so I was a little taken aback.  I asked Shimojo san about this and he said that once we start chiseling the mortises for the huundu the pounding of our mallets is going to move the bottom around, so we have to stiffen hull structure with glue.  I asked him what he did in the pre-glue days and he said that he would have put in the bamboo nails at this point (we've always installed those after the huundo up until now).  He said that the bamboo nails would have gone in at a slight angle, not parallel with the plank face, driven in from the side of the bottom timber into the side planking.  We also cut a few inches off the ends of the bottom, not a flat face but in a very slight V. 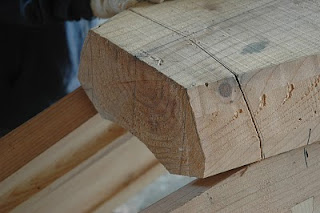 Bondo, the most common Japanese wood glue, is a white, urea resin-type glue.  Shimojo san adds an accelerator that amazingly kicks the stuff off in about twenty minutes.  Since we always quit for the day after a glue-up I am not sure why he bothered, but in the accelerator went (a white powder) and that's why the family had joined us: because we needed lots of hands to scramble around, spreading glue fast, hoisting the bottom into position with the chainfall, pounding in dogs (staples) to clamp it together, etc.  It reminded me of the frenzy that always accompanies steam bending in the West.
Shimojo san mixed a small batch of glue and stirred in fine sawdust (we've got plenty of that) for a filler.  The bottom of the boat has lots of holes, from the staples in particular.  As the rest of us worked he went around filling dents, dings and holes. 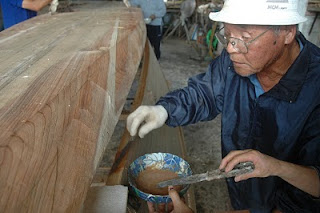 Shimojo san had already laid out the location of the huundu, spaced as always every shaku (foot) down the sides seams, to within about two inches of the ends.  Thirty-eight in all.  With the bottom dropped on we pounded in staples at points midway between our huundu layout, both inside and outside the boat. 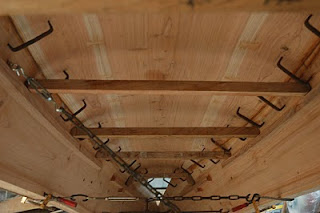 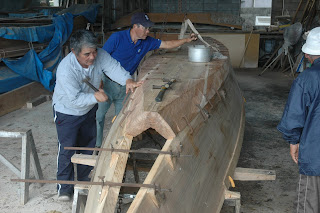 Excess glue wiped up, tools, hands and clothing cleaned off, shop swept, end of day.  Time to sit around for awhile and talk. 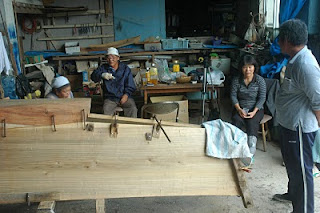 The next day I sat down to start installing huundu.  I chiseled out flat spots along the seam (our bottom is still a good 1/4" oversize on the inside and outside) where the huundu go.  Shimojo san told me he would put in the four at the ends.  He said that those close to the endgrain were tricky.  After lunch Shimojo san's son took over for him and basically with two people working it took most of the day to mortise and install all the fastenings.  After we roll the boat over we have matching huundu for the inside seam. 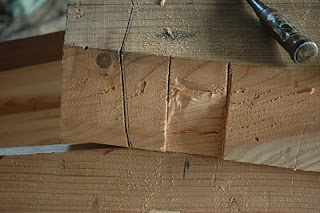 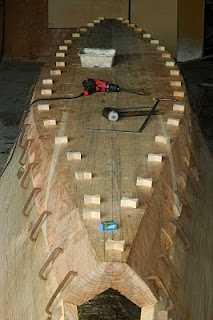 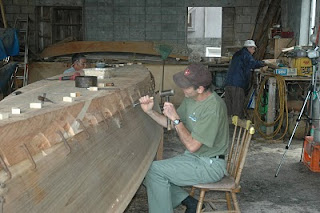 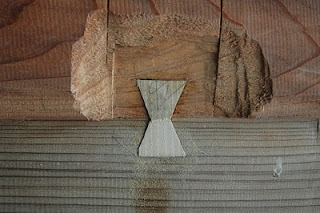 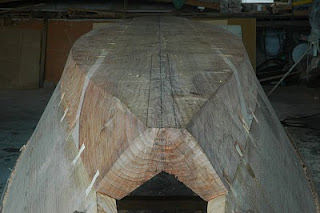 An Aside:
Some readers might be wondering with all this use of glue why we are still relying on the traditional fasteners at all?  It's a reasonable question, and when I asked Shimojo san it's clear that while he appreciates the convenience of glue he doesn't trust it completely.  I have encountered this with some of my other teachers.  We glued some of our seams in Tokyo and Fujiwara san said that adhesives, in his mind, were good just to hold seams together so that dirt had a harder time working its way in.  To suggest to either of these men that they rely only on adhesives would probably, in their minds, call my sanity into question.  That said, these are large boats and in the water racking forces could be great enough to break these glue joints.  Wood movement alone could do the same.  Besides, that line of dovetail keys looks so interesting.
Postscript:
I did ask Shimojo san about using glue alone and his answer led to a shark story.  Too tired to write it all now, so look for my next post.
Posted by Douglas Brooks at 2:10 AM