A Tour of the Shop

Shimojo san has always lived at this site, although there have been three different houses here in his lifetime: his childhood home, destroyed in the War, then a small post-War house followed by the current large poured concrete structure.  His shop is a cinder block structure that replaced basically a lean-to roof that covered his former work space, which had an earthen floor.  We work on a concrete floor that is stained with various puddles of hardened epoxy, left over from his days building fiberglass boats.  The shop has a huge opening to one end and no door.  The weather isn't severe enough to require it, Shimojo san does not like working under artificial light, and he insists there is no crime on Iejima. 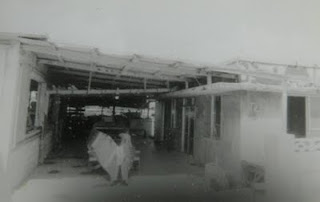 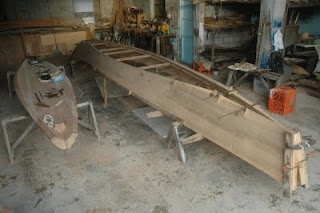 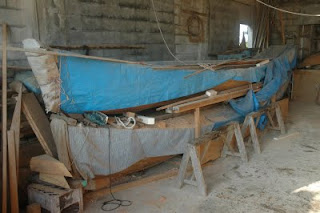 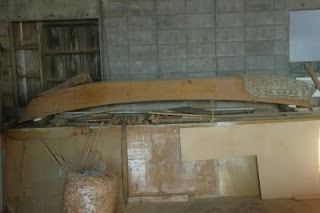 Spread around the edges of the shop are two seven meter sabani that he has built over the last couple of years.  There are also two small sabani, one measuring 18' 5" in length with a 2' 8" beam and the smallest one, an amazing 12' 9" sabani that is just 2' 3" wide!  Shimojo san's son told me that his father built them because he had the materials.  I asked what one of the seven meter boats would cost and he said 1.8 million yen, or about $20,500 USD at today's exchange rate (the dollar is at near record lows right now).  Despite the surge of interest in the sabani races, it seems that teams do not have that kind of money.  At the sabani race I watched there were several new and several very old boats.  Most teams are informal groups and finding an old sabani and fixing it up to race is the most cost-effective way to go. 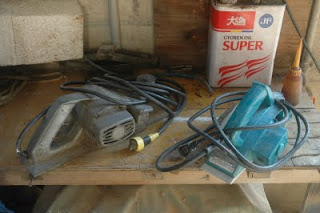 Shimojo san has three large power tools: two 14" bandsaws and one multi-tool that combines a 12" table saw, planer and joiner.  There are lots of hand power tools, particularly planes, one of the tools that Shimojo san can use easily.  His hand tools are all quite old except for one new saw.  I started using his old, 1960's vintage Makita power plane.  Its all metal and too heavy for Shimojo san to use one-handed. 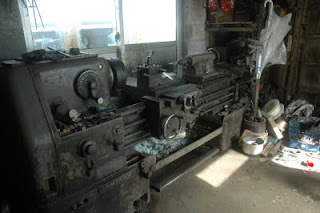 In a small room off the boat shop is his machine shop.  He has a large metal lathe, a welder, drill press and other metalworking tools.  He told me that he was the first person on the island to be able to machine parts (there was a traditional blacksmith here) and Shimojo san started installing small, one-cylinder engines in sabani after the War.  He even installed some inboard engines in the tank boats (see previous post entitled Tankobune).  Later he did propellor and shaft work and of course this work grew as more and more boats converted from sail to power. 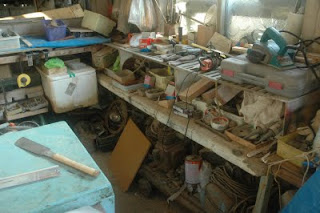 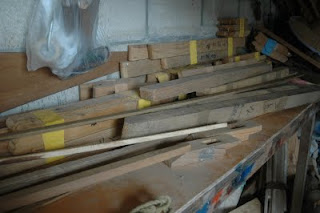 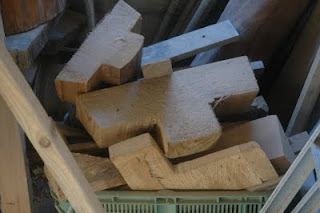 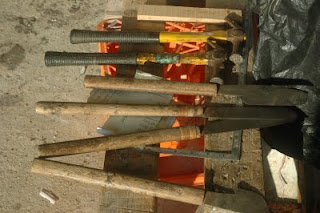 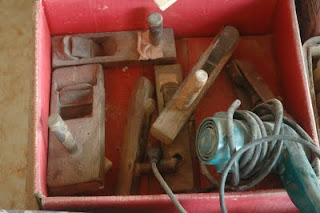 We sometimes have a hard time finding tools we need. 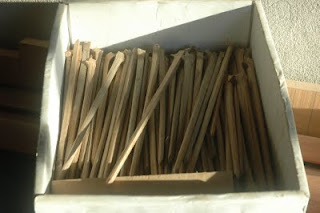 Strewn in the corners of the shop are the offcuts from trimming the sides and bottoms of previous sabani he has built.  Shimojo san keeps these as patterns to check our work.  He seems to save every single scrap of wood.  There is a large pile of offcuts outside the shop.  He has said that the planks from the tree for our boat that weren't used are enough to build another slightly smaller sabani, and I suspect he will start this boat as soon as we are finished. 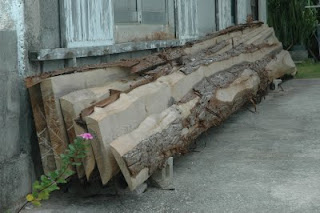 Miyazaki cedar, over two inches thick,  two feet wide, twenty-five feet long.  Shimojo san told me I could take it home with me if I wanted it. 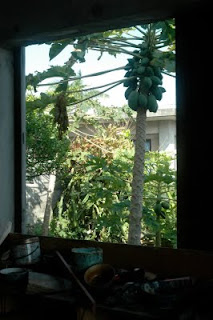 And nothing like papayas ripening outside the shop window.

Posted by Douglas Brooks at 2:50 PM