This monster of a timber finally went on the boat.  Without the chainfall I don't know how we would have done it without at least four strong people.  The three timbers that comprise the bottom have been glued together, and dovetail keys (huundu) installed along the seams inside and out, along with bamboo spikes. 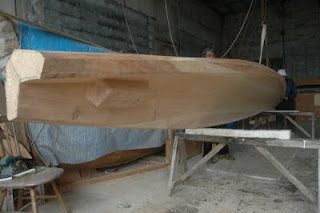 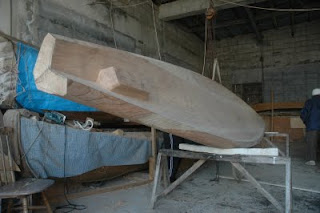 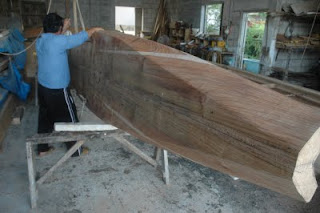 When we got it in place the seam on one side was still very good, just as we had last fit it.  The seam on the other side had opened in the middle, the result of a slight change in the bevel of the seam that canted it slightly when we glued the side timber on.  It is open about 1/8th of an inch at the largest gap amidships, and fits very tight at bow and stern. 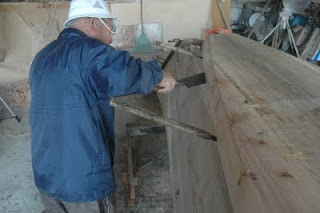 Shimojo san began running his largest saw in this seam, starting at the stern and moving forward.  It took him 45 minutes to saw through eighteen feet of seam.  He used his wedges to keep the seam open and by and large he wasn't sawing with too much resistance, just enough of a gap in the seam so that the saw at least touched both sides.  The hardest work was at the ends where he needed to remove material so it would come together at the center.  He has to work one handed, and I also noticed that for the most part he held the saw at an acute angle to the cut.  He also oiled the saw blade frequently and of course used his innovative wedges (old saw blades) to keep the seam open just enough. 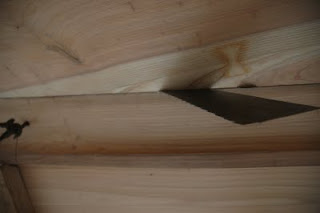 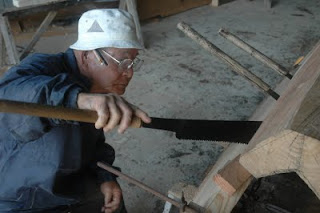 It is EASY to make a mistake doing this.  What is likely to happen is the saw leaving the seam on the inside of the boat and beginning to wander off into either the side plank or the bottom.  At either end you are going to be sawing against the grain on either the side plank or the bottom timber (working against the grain is going to tend to pull the saw blade out of the seam).  Shimojo san got down off his chair and crawled under the boat several times to check this.  He told me that for most of his career his wife would sit under the boat through this entire process and guide him, and when he had to work alone (they had six children) he sometimes rigged a large mirror.  I finally wised up and got under the boat.  At one point his saw started to bite into the edge.  I told him and he made an adjustment and got it back on track.  But if this man, building over 100 sabani over the course of sixty years, is this careful about this technique then you, Dear Reader, and I, better take these warnings to heart. 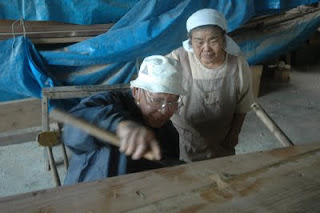 Shimojo san tries to give me advice explaining how to do this, pantomiming a frenzied pace and then waving his hand and telling me that straining with the saw is bad.  His remarks are always punctuated by "Yukkuri dozo," or "slowly please."  It is part of the reason I have taken to timing some of our work, to give some perspective on how carefully we do these things. 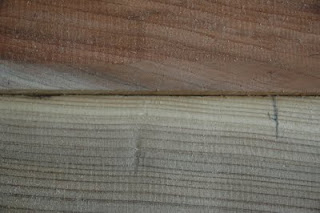 After one pass our day was over and he said we would need one more and the seam would be tight.  He said that when he was in better health he could get a better planed fit so that only one pass of the saw would be necessary.  The seam still looks very good and I am sure we will do the other side in one pass.

The next day:  We finished the first seam and did do the other seam in one pass, or I should say Shimojo san did, taking three hours total to do it.  His arm is sore and he took lots of rests.  I simply stood at his side, or got under the boat to tell him how it was going.  I finally asked him if he wanted me to do it, to give him a break.  He waved me off, saying, "This is the hardest part of building sabani.  This is the most important seam.  I have to do it."  I expected as much.  After all, he's known me for just four weeks, and while he has trusted me with plenty of other work on the boat, not this, not yet.

Yukkuri dozo.
Posted by Douglas Brooks at 2:20 AM